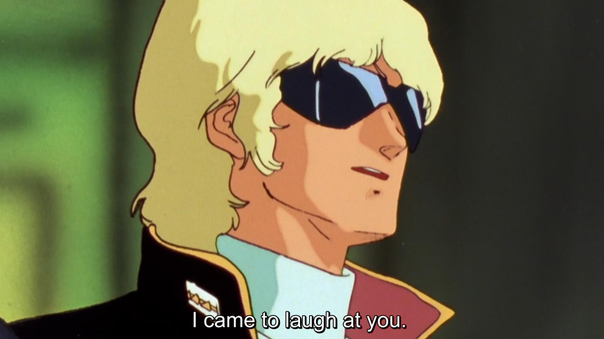 It’s that time of the year again! Where I correctly tap into my psychic powers, and predict everything that’s going to occur in the year of 2016! I’m going to stick to MMOs, because my cohort/minion ColtronXL went ham on the MOBA track yesterday. Last year’s MMO offerings were really. . . kind of a letdown. Skyforge was pretty but hyper-repetitive, no matter how much my editor overlords like it. WoW’s expansion was okay. It was fun for the first couple of months then I ultimately lost interest. Even building my base got kind of annoying after a while. Guild Wars 2 tried a new business model and most of whom I spoke to about it didn’t really like how restrictive it was for people that didn’t buy the game immediately. TOR did some new stuff, and joined the surprisingly small club of games to get something right in 2015. FFXIV didn’t make waves, but maintaining its status quo is good enough to stay on top of the mountain for now. So, what’s gonna happen this year? I think I have an idea. And honestly, I don’t think it’s going to be related to new games, but more a resurgence of what’s already popular.

Behold! The words of the prophet Ragachak. Once the hype of Blade & Soul and Black Desert fades, bandwagon gamers will realize they’re rats without a ship with no major new launch in sight. And return to a previous nostalgic title that’s had the time to make things right. 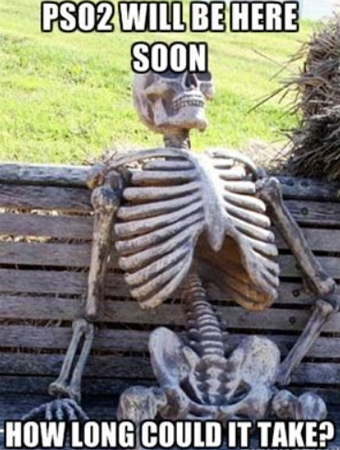 Face it, it's never coming.

Phantasy Star Online 2: Last year we had rumblings of an English Patch, or an English Server, or some bullshit that would lead us to believe that as a people, we could play an MMO that everyone is still hyped for, even though it came out four years ago in Japan. This is some Black Desert level hype. Alas, I wouldn’t count on it. Maybe…MAYBE at the end of the year, there will be some kind of announcement, but if I were you, I wouldn’t hold my breath. I love the Phantasy Star series, but I’m kind of tired of waiting. I’d rather play Hello Kitty Island before I held my breath on this title. At this point we’re more likely to see PSO 3 before 2. Hype Meter: 1/5 [Mild Hype] 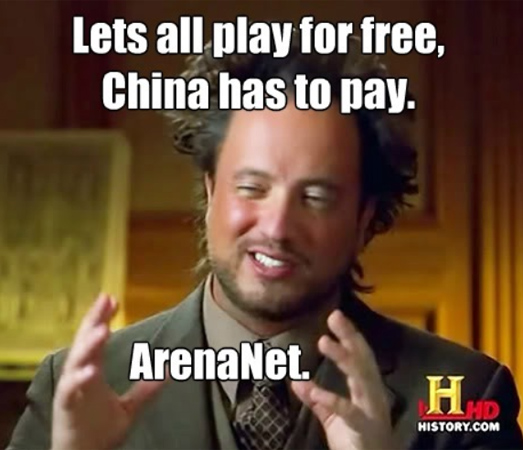 A rare western developer getting vengeance.

Guild Wars 2: I don’t really know how I feel about Guild Wars 2 right now. To be absolutely honest, I enjoy it a lot more than I did when it first came out. Heart of Thorns is kind of nice, and the new business model of giving the older game out for free is interesting. But it’s incredibly restrictive. Heart of Thorns is only a few months old, so I don’t anticipate an expansion yet. ArenaNet isn’t Blizzard. They don’t throw expansions out in their games like candy. There will probably be just a few exciting patches, but it’s not going to be enough to change general opinion on the game. The game is solid but just doesn’t bring what I’m looking for in my hardcore gaming experience. However, they have a system of collection and exploration that puts them above the competition by a wide margin. So long as they keep their Living World (read: developer hell) going with the new model, I see Guild Wars 2 maintaining its position at the pinnacle of MMO gaming for years to come. Hype Meter: 2/5 [Moderate Hype] 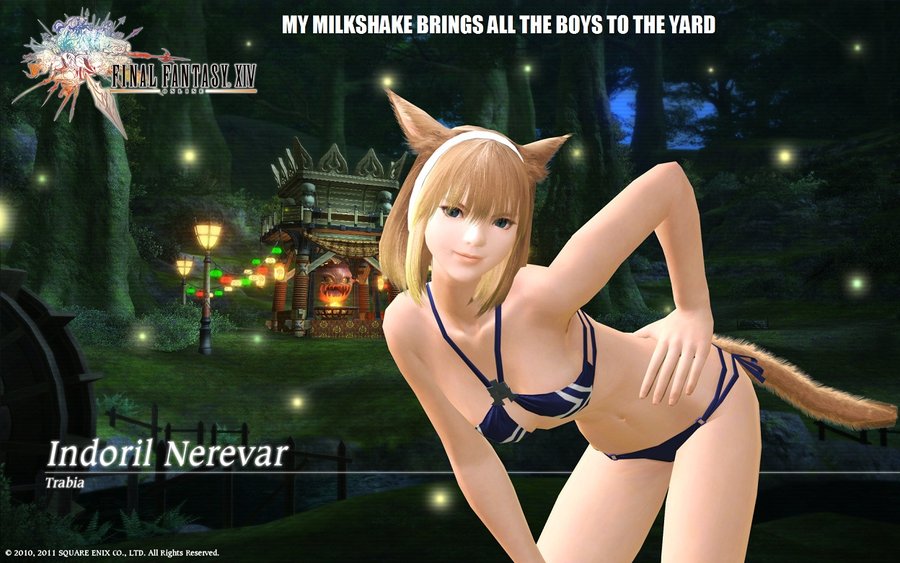 You'll come back for that pussy.

Final Fantasy XIV: Ah, FFXIV; the little MMO that could. I love this game, I love it more than I have any MMO in a very long time. But I don’t anticipate another expansion this year. It’s a gorgeous game with solid gameplay, but it just… doesn’t have the attention of other MMOs. People can’t get over the “But it’s not a traditional FF game!” hump. Maybe when XV comes out, and the audience will pick up on it. I can have hope. I’m willing to bet by Pax Prime to CES time, we’ll get some rumors or announcement of another expansion, but it won’t drop til 2017. Catering to the lore maniacs with a few highly demanded classes like Time Wizards of course. It’s still incredibly fun, and the ability to play anything I want trumps having 1352135235 alts. Hype Meter: 4/5 [Crazy Hype]

World of Warcraft: Legion. Blizzard’s taking chances and making some big moves on Legion, with the return of the Burning Legion, Artifact weapons, Demon Hunters, and giving players all kinds of stuff that they’ve wanted for years. But is it enough? If the story isn’t good, consider this expansion to be Blizzard’s Swan Song. I love Blizzard, and I’ve been a part of WoW since the beginning, but that doesn’t mean I’m gonna fellate them. They have been steadily losing numbers, and if this expansion doesn’t deliver, it could very well be the end. Or a “free to play” model.
For a good decade, World of Warcraft was the titan that made MMOs “cool” to play. I pray it doesn’t become the Lusitania. Hype Meter: 3/5 [Fair to Moderate Hype] 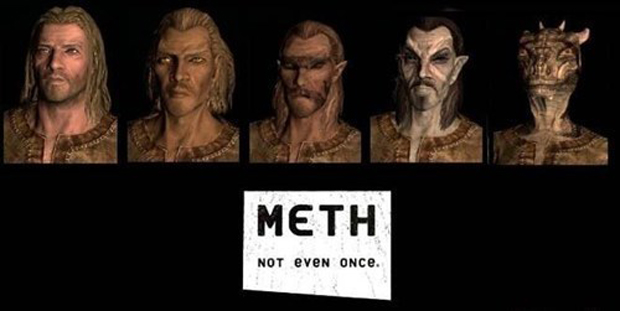 TESO: Yeah. This is gonna still be a thing. It’s about as relevant as the Warhammer MMO, and TESO even gave away a million dollars. That’s all I’ve got to say on that. Hype Meter: 404 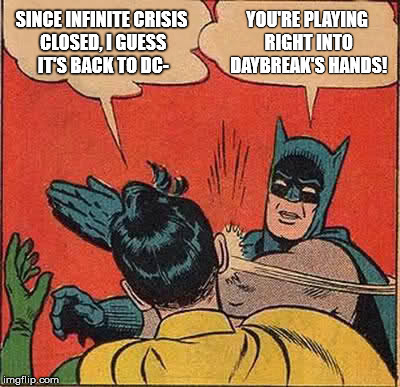 Recognizable references. Something you won't find in recent DCUO updates.

DCUO: DCUO is going to be moving to Xbox One, to offer another f2p game for their market. Definitely not a bad idea, and I still think it’s a pretty fun game. I don’t think it’s going to revive their franchise, at least not yet. It’s getting better, and their new dev team has been really busting their asses to make something out of the rubble that was SOE. I’d at least keep an eye on DCUO as Daybreak Games new flagship title. Hype Meter: 2/5 [Moderate Hype] 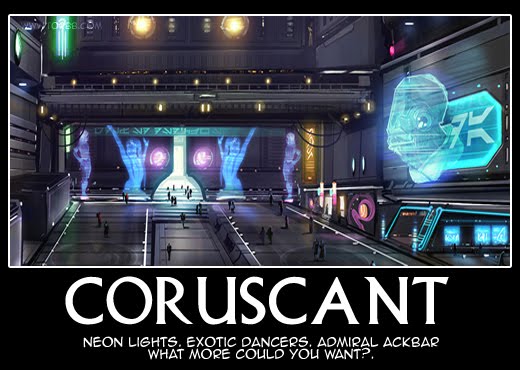 Dark Horse Pick: Star Wars: The Old Republic: The official “Dark Horse” pick is TOR. With the Star Wars hype at an all-time high, thanks to Episode VII, coupled with the new, fantastic story that the TOR writers came up with, I have a feeling that 2016 is gonna be the year The Old Republic gets its revenge. Lots of new story content, and finally enough things to do in the game to stave off boredom.

I’d recommend people who haven’t subbed since it came out, and are unsure if they should try, ought to at least sub one month, get all the perks, and give it a swing. I don’t think there will be disappointment to be had. Just someone help this game to stave off the EA hammer of doom long enough to show its chops! Hype Meter: 5/5 [GET HYPED SON]