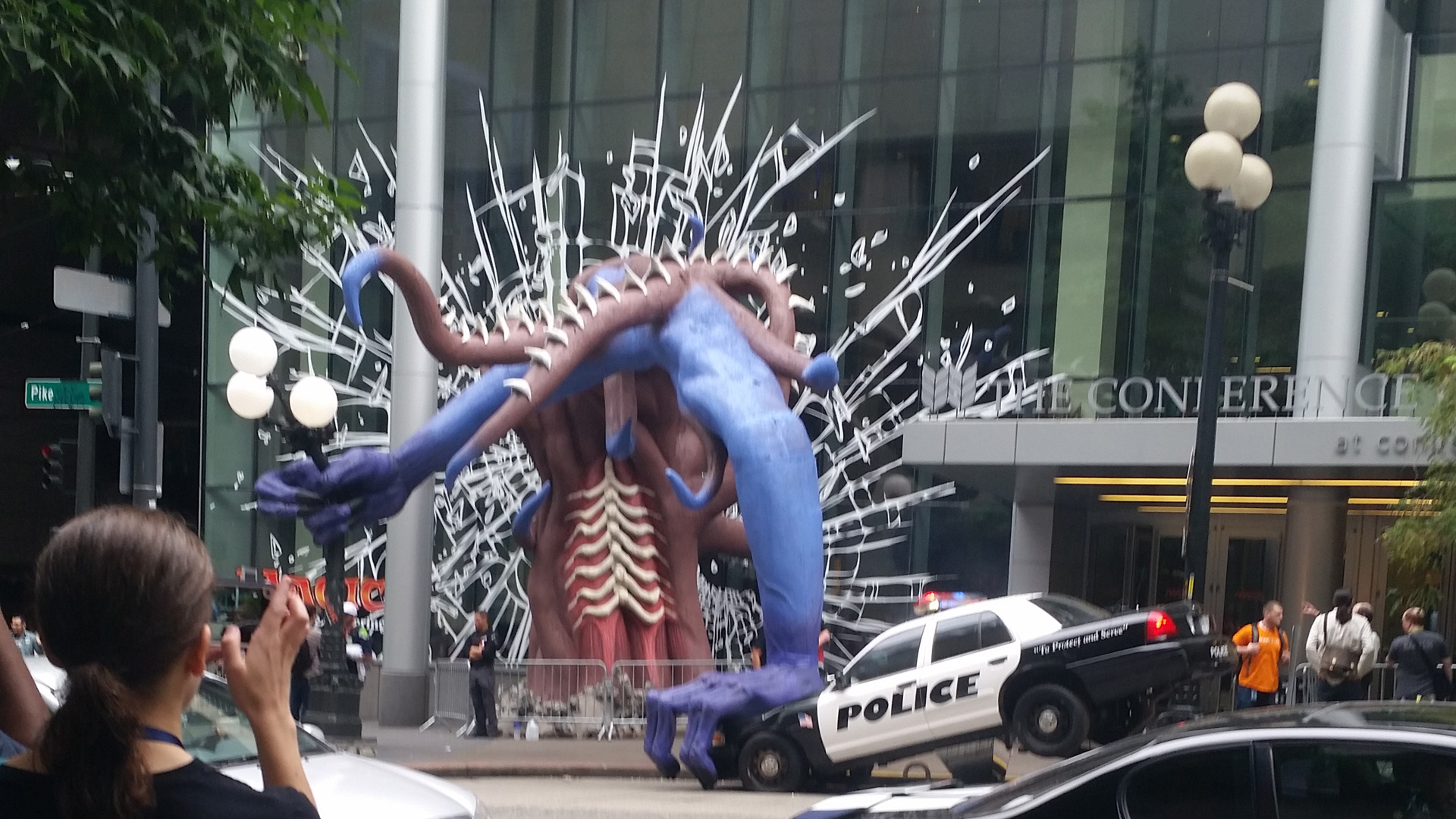 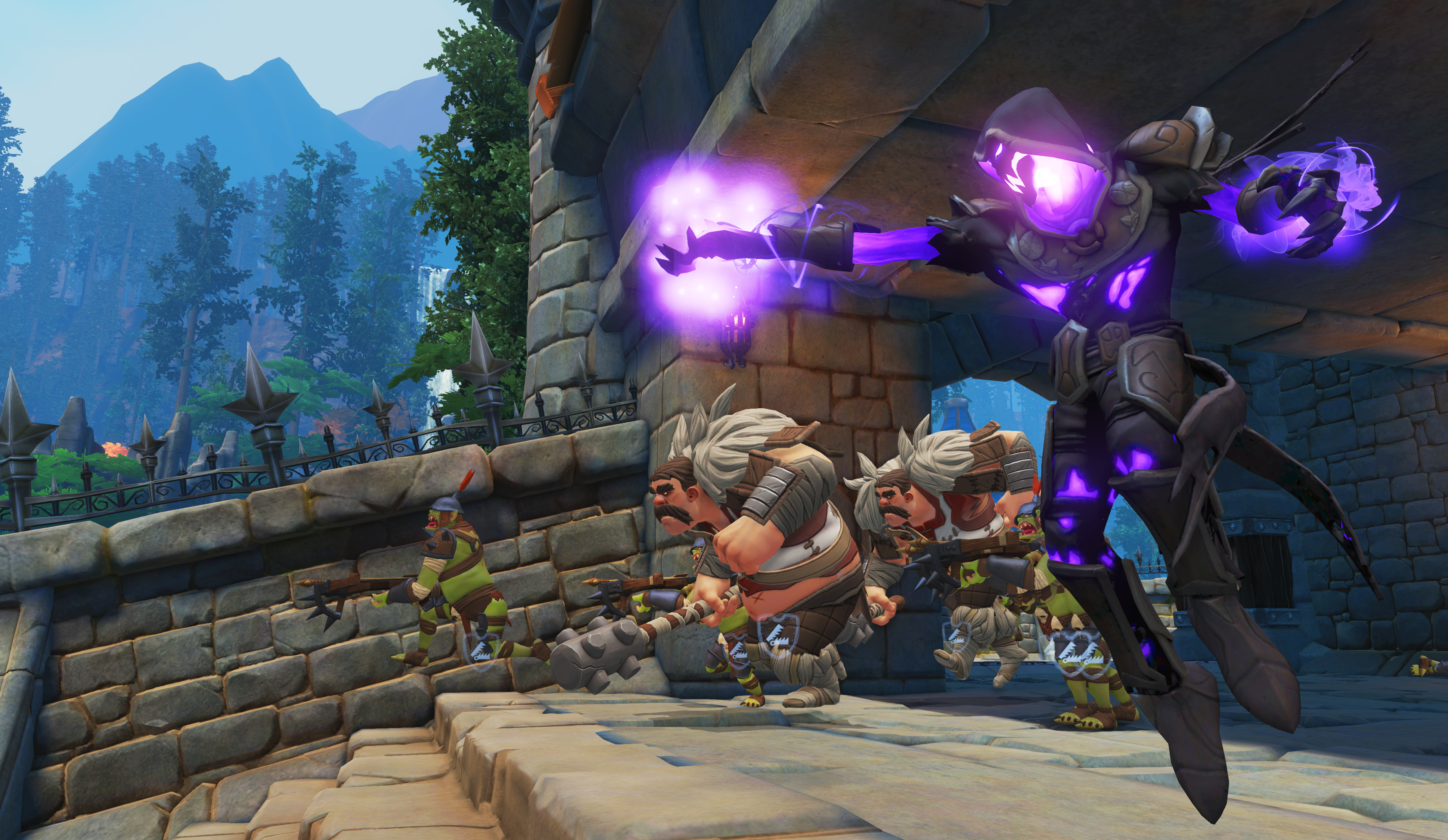 Let’s face it, Orcs Must Die: Unchained has been cooking in the closed beta pot long enough to qualify as grandma’s Thanksgiving stew. We’ve seen this game ride and fall on hype waves through more cycles than most games see in their full start to finish lifetime, all without ever actually launching. Though the fact that gamers keep getting renewed levels of excitement at new features being revealed seems to say that Robot Entertainment is onto something by putting their action tower-defense gameplay into the online multiplayer spectrum. Though maybe the MOBA head to head style gameplay alone wasn’t quite what they needed to make the game work.

Enter our visit at PAX Prime, where Robot Entertainment had the new survival guantlet co-op mode set-up. Teams of five players were set to work together to keep the impressively massive waves of baddies at bay through ten increasingly devastating invasions. Ragachak, Scott, and I were growing increasingly fearful as we watched team after team of PAX attendees fail on waves 7 and 8 of the demo. The three of us had never touched the game before so our chances of recording a successful run seemed slim. 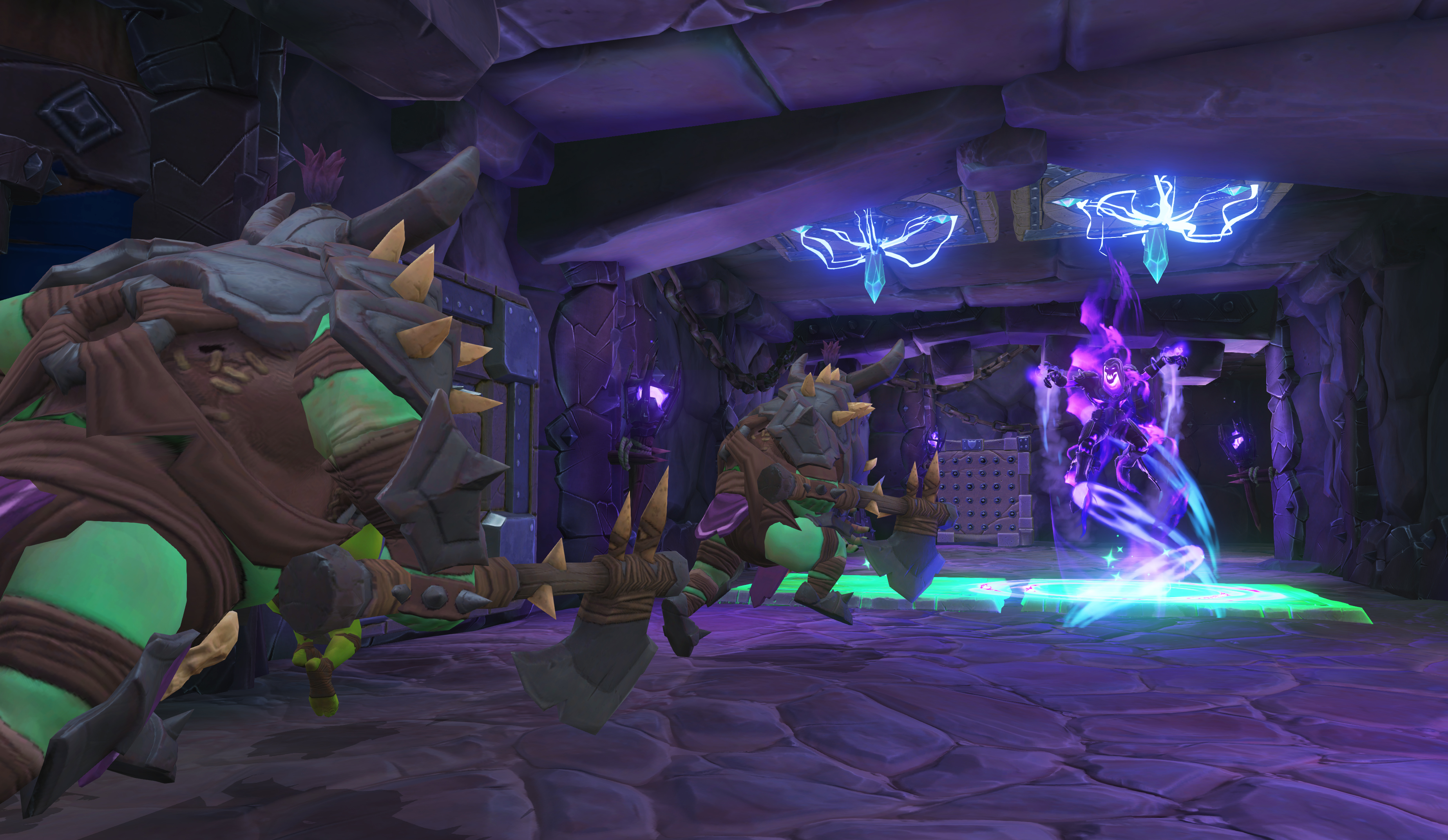 For those not in the know, Orcs Must Die Unchained is a mash up of many popular online gaming models that somehow works as one united system. Players choose a hero from an ever growing roster currently consisting of 11 characters broken down into offensive vs defensive heroes, and further defined by their sub-archetype as assassin, mage, tank, or support. These characters then utilize MOBA styled skills to actively fight back against approaching waves of enemies (or other player heroes in PvP modes) while earning currency from combat to set-up traps along the path.

For the PAX demo, we were automatically assigned as the team of Maximilian – Ragachak (a supportive crossbow user), Stinkeye – Me (supportive totem summoning shaman), Smolder – Scott (defensive fire mage), Gabriella (control sorceress), and Cygnus (mage that can double as a tank by manipulating mana). We fought on the survival mode in the Unchained Fortress, featuring two lanes that interconnect at various intervals, but offer not so convenient cliffs to let you fall to your death should you carelessly try to jump between lanes in the midst of combat. Cygnus and I choose to do just that at the start of wave 7. We still don’t fully understand how we recovered from that folly!

I’m unsure if the maps feature any random elements to them yet, but as it stands the challenge was very real, though manageable with smart play. At first you lack the currency to set many traps, forcing your team to rely on kiting and agro control to delay the initial few waves from doing serious damage to your fortress doors. Unlike most survival games, even the minions here hurt like hell if they get a hold of most characters, so this is quite the precarious dance to pull off without losing someone in the process. Trying to lay directionally sensitive traps while in real-time combat on top of it ranks right up there with rubbing the top of your head and belly at the same time. 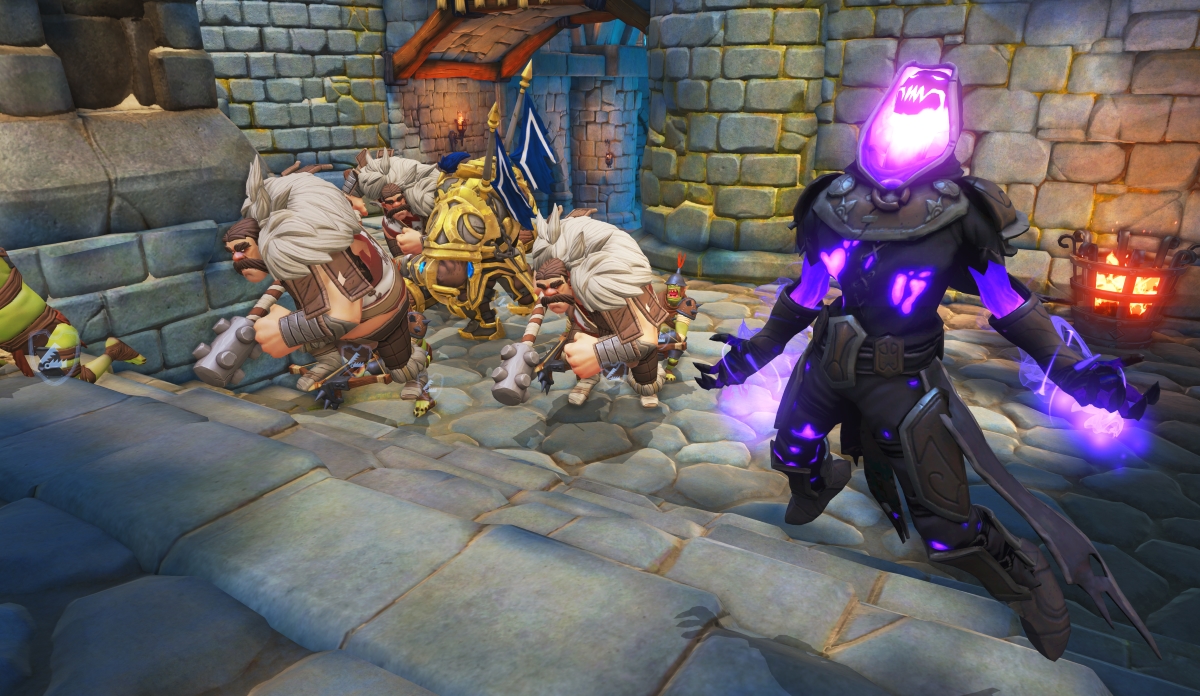 Just when we thought we had the hang of the system, with a powerful corridor of death traps capable of holding off unreasonable numbers of assaulters, the game threw us a hefty curveball. A wave featuring massive cyclops came storming down the second route, at which we had zero traps set up. With most of our currency spent fortifying our existing trap corridor, we had no choice but to stand against the strongest wave yet with just our heroes. As you might expect, not all of us survived that round, and those that did held on with a sliver of life.

From that point on we watched helpless as our traps just weren’t enough to fully stop the true post-wave 5 minion rushes. The enemy units were tankier, faster, and hit harder than anything before, smashing through our outer walls and bashing all the way up to the doors protecting our central crystal. Still by understanding the synergy of your teammates traps (which are customizable on your account, not hero bound), you can hold back some nearly unstoppable boss monsters for quite some time. We set up a combo of spike traps as wide as the hallway, followed by a crushing column that protruded from the roof, with a launch pad at the end that would thrust foes back to the start just outside our crystal room. Alone these traps did minimal damage but together, they kept that final defensive wall standing until the very end of wave 9. 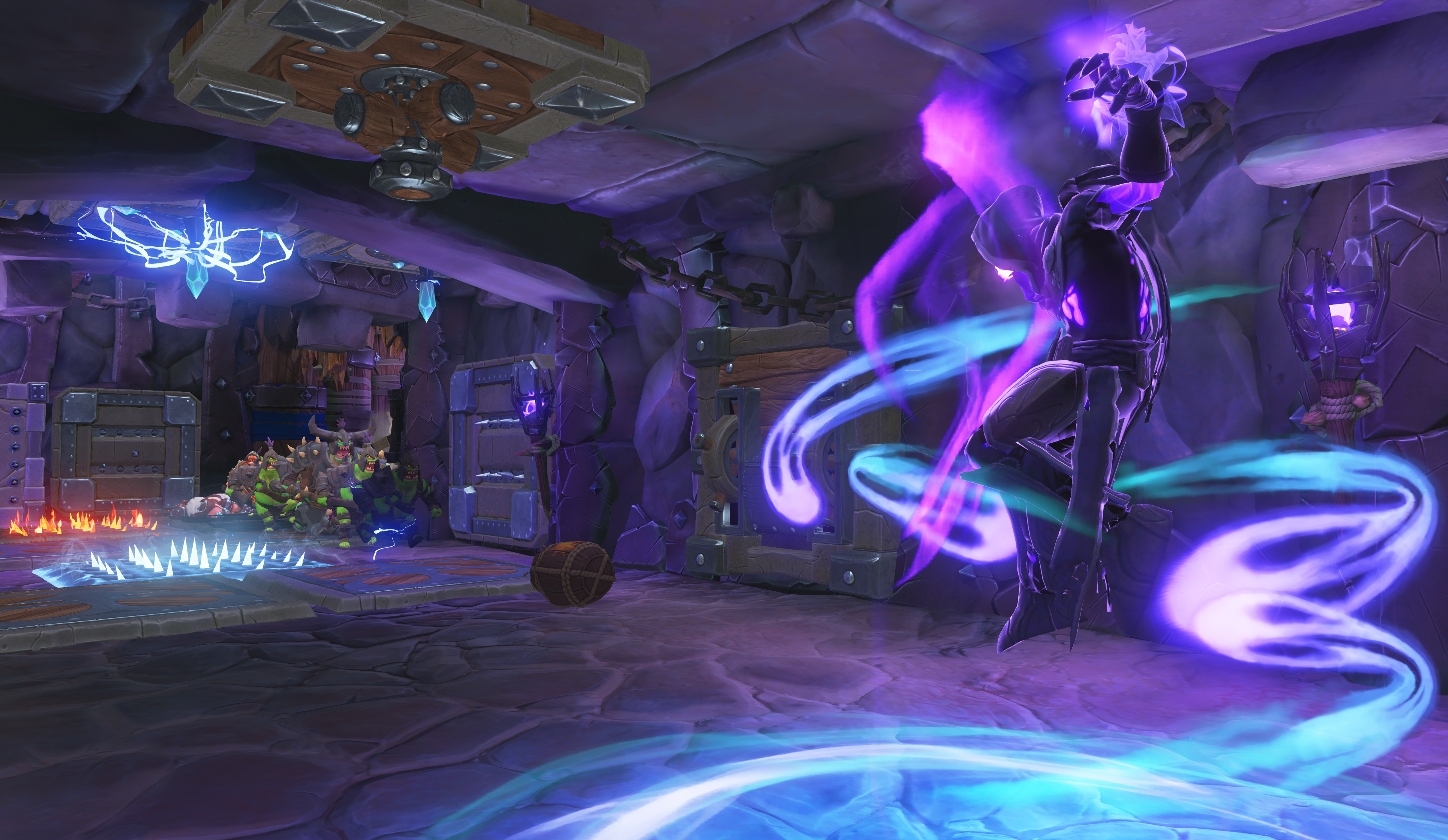 Then there was wave 10… the soul crushing wave. I’m not sure which difficulty the enemy AI was set to for our bout, but I think we were all caught off guard that we actually held steady through this madness. Heroes build up an Unchained meter during survival mode that can let you go the fantasy equivalent of super saiyan for a short time, which apparently can be amplified when unleashed at the same time as nearby heroes. Three of us did just that, creating a defensive wall where we once had a defensive wall protecting our crystal. The giant club wielding orcs smashed through our impressive organic wall like butter. But still we fired on, dropping traps and unleashing every last ability as soon as it came off cooldown. Not a single enemy touched our crystal that day, thanks to filling nearly every room in both fortress lanes with synergistic traps to buy maximum time.

Now typically bot games are an after thought in all variety of MOBA out there. But Orcs Must Die Unchained seems to have enough strategic elements present to make a fun mode that I could see myself repeating. With multiple maps, and some randomized elements to the spawn, this could be a fun way to releive the stress of the day. The game is set to finally be removed from grandma’s pot sometime in 2015, and since it’s already September we assume we’ll see it in time for Thanksgiving.

Be sure to check out MMOHuts’ youtube for commentary showcasing this demo as well!