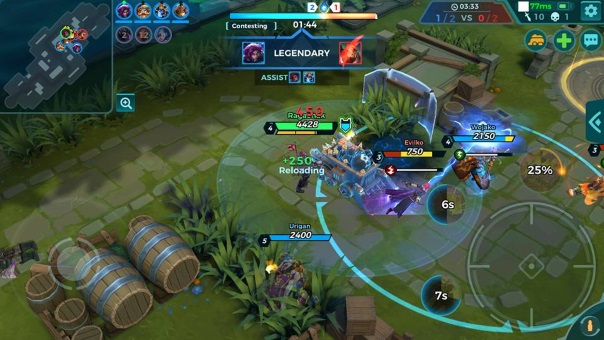 Good morning, Internet! There’s a surprising amount going on right now. We just had a new adventure in SMITE in “Hel’s Inner Demon Arena”, Khan arrives today in Paladins and I got to sit down with Paladins Strike again for the first time in what feels like ages. No patch notes this week, but I did learn that in a few patches we’ll get a new god for Smite, so that’ll be exciting. Maybe we’ll get our first Voodoo god (with my money on Baron Samedi). I know I say “every week” that I have a brief news piece, but this time I actually mean it! You know, probably! So today I’m going to talk about those things briefly, and how they’re going so far. As another side note, MMOHutsLive is well, live on Twitch! So click that link at the bottom and follow, and consider dropping a sub, if you enjoy our site’s content! 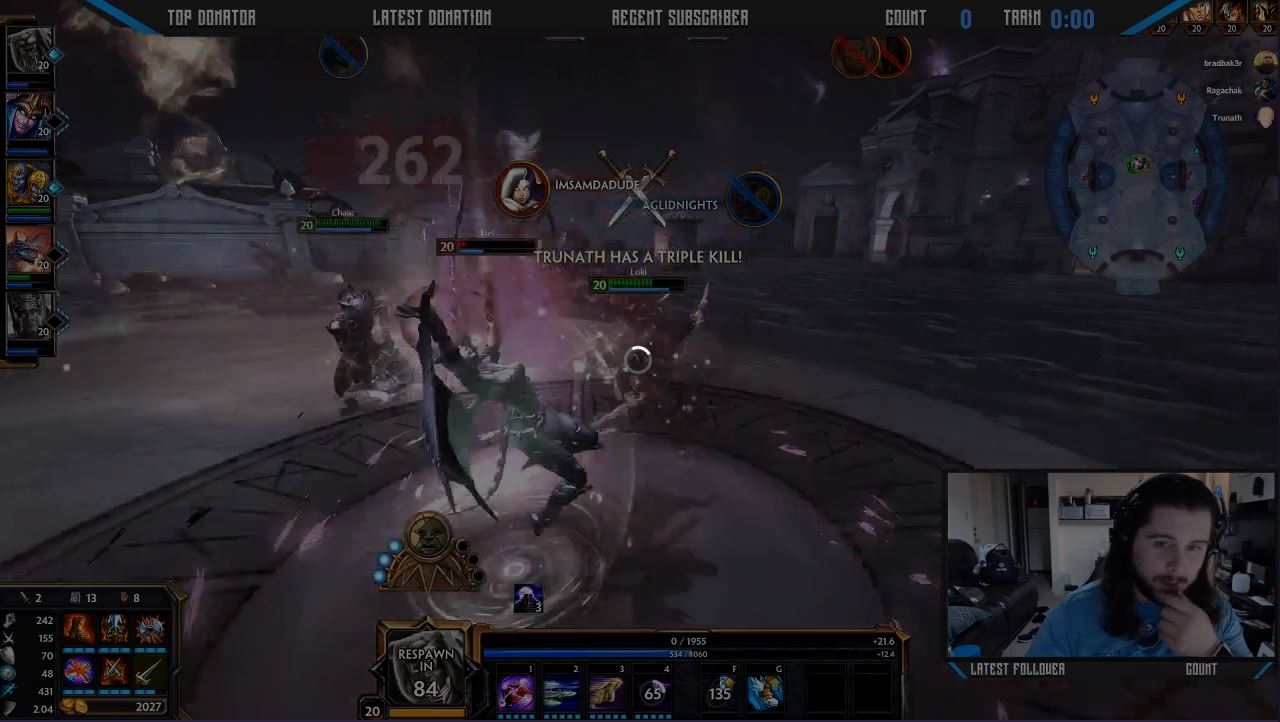 We died, but Trunath got a triple kill. That's what matters.

This is a new way to play Arena in SMITE, and it’s my sincere hope that this is a prelude to a visual update for the Arena, because this works for me. Sure, we’d have to get the audience back, but I think if this led to a visual update for my favorite (and the most competitive mode in SMITE) match type, that would be what’s best for business. The mode has the same goal (bring the other team’s tickets to 0), but other things lead me to believe it will guide us to some much-needed updates for Arena. This Adventure clearly shows on screen when you’re losing tickets from minions, from Juggernauts hitting the portal, and make it more clear when you can no longer target units entering said portal. This Arena extends into forever, but once you leave the bounds of the arena and enter the water, you have one second to live. You can’t Aegis and run there either because a giant serpent still shows up and executes you. These pools of water also appear in the actual arena, and you do not want to be standing on them.  The other major key is the Serpent Demons. Killing 2 out of the 3 summons a Titan (Juggernaut) for your team, that actually fights the other side, unlike Bomb-Dudes in regular Arena.

Those Serpent Demons spawn on three out of four water pools on the map, so one team won’t have an advantage in their placement every time. In addition, the Buff Camps are much stronger now, but have their duration cut in half (60s instead of 120s). Blue has mana regen, CDR, and damage mitigation, and purple offers attack speed, attack power, and haste. They’re very powerful, and you do not under any circumstance want your opponents getting yours. As an aside, The Morrigan is banned in this mode, but I can’t rightly figure out why. I was expecting Hel to be banned here, but I guess she’s powerful enough to appear within her own mind. And she’s very (very) powerful in this mode. Why? CLEANSE. If you stand in the water, you die. So how does cleanse help? Let’s take a look at some of the characters that are strong in this mode: Basically anyone who can move you around.

Fenrir can drop you in the water and try to bodyblock you from leaving, Xing Tian can just throw your whole team, Hercules can knock you into the water, Sobek, with good timing can flip you into it. Then there’s Chiron’s Superkick Party (and Cleanse, making him the best choice for Hunters, next to one other), and Anhur. Anhur can both knock people back, knock them up, and can use his Obelisk to prevent people from escaping the water. Sure, you should have at least one of these characters on your team (more if you can manage), but don’t focus on putting people in the water, or at least, not all of them. And of course, any healer that can cleanse is a godsend to stop your opponent from doing shady stuff like putting you in the water.  Other than that, it’s Arena, it’s fun, so you should certainly hop in, unlock those Death Marks, and have fun, because that’s what this adventure is: It’s just a fun, ridiculous Arena mode. You can focus on putting the other team in the water, but it won’t guarantee victory. But I won’t lie, it is fun to pick Ares, chain everyone and drag them to their doom, or pick Cerberus and just throw them all in the water and wall them in with Ymir or Cabrakan. 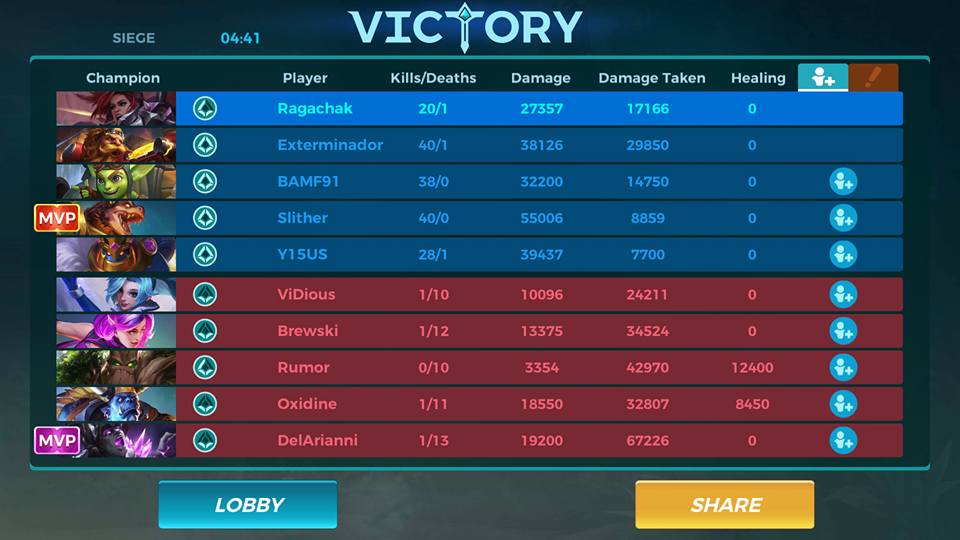 Healers are overrated, tanks are life.

I haven’t played Paladins Strike since around late fall last year, shortly after I reviewed the Closed Alpha of the game (which can be seen here). I missed the game, and had no idea there was a PTS that was available not too long ago. But man, a lot has changed since I played last! The biggest change is that the cast has increased significantly. Twenty of the champions from Paladins are playable, but no Torvald yet (that’s a very serious mark in my book. Torvald is basically the best character in Paladins. That’s not bias speaking. Honest).  I didn’t see the ability to set “cores”, the system previously in the game that let you set some buffs and advantages (like talents in other games), but they are still there. When I hit account level 5, I received a chest that had some random cores in them, which were for Makoa and Viktor. I’m still not clear on what those do, but I’m going to have to really sit down and find out. This patch also saw eight of the characters updated (Kinessa, Maeve, Ruckus, Tyra, Lex, Terminus, Makoa, Skye), and I do have to say, I still love the idea of a top-down shooter version of Paladins. But Siege was very tedious in the original run of the game I played.

Instead of it feeling like a weird loop around the map that took a nightmarish eternity to complete, now it only takes two points to win, one on the capture, one on the completion. But failure to push to the point gives the other team a point. The match will probably take about eight to ten minutes, and now the payload moves along a clearer, more sensible path. This Siege drove me nuts in the Alpha and I stuck to mostly playing Deathmatch, but alas, I can’t play that right now. It’s in the game, but not playable, which makes me incredibly sad. TDM is a lot of fun in this style. The art looks cleaner, and the UI takes up less real-estate on the screen. Not to mention, it plays smoothly on my Android Note 4 (My S8+ is presently unavailable, due to a screen issue), so it makes me happy that it can be used on an older phone. PTS 3 is going smoothly in Paladins Strike, and I highly recommend players get in right now, check the patch notes on this link, and then go enter the PTS for yourself. The feedback will only help the game improve. Personally, I think it’s going smoothly, but I’m not really keen on the cores, if they add stats, even less if they’re random. Every character I’ve played so far has been awesome, and the radius of abilities is clearly defined (which is important for a mobile game, and a shooter). Paladins is a franchise I’ve really fallen in love with since the Closed Alpha of the original, and I’ve enjoyed the growth and using the characters in other ways. Sure, that “Summon” mode is still there, but it wasn’t really as fun for me the first time, and I think the focus should be kept on TDM/Siege. A more MOBA mode for Paladins could be interesting, especially on mobile. It’s clear that MOBAs work on mobile, just look at Vainglory’s success. But Paladins Strike is fun, and you should definitely check it out. 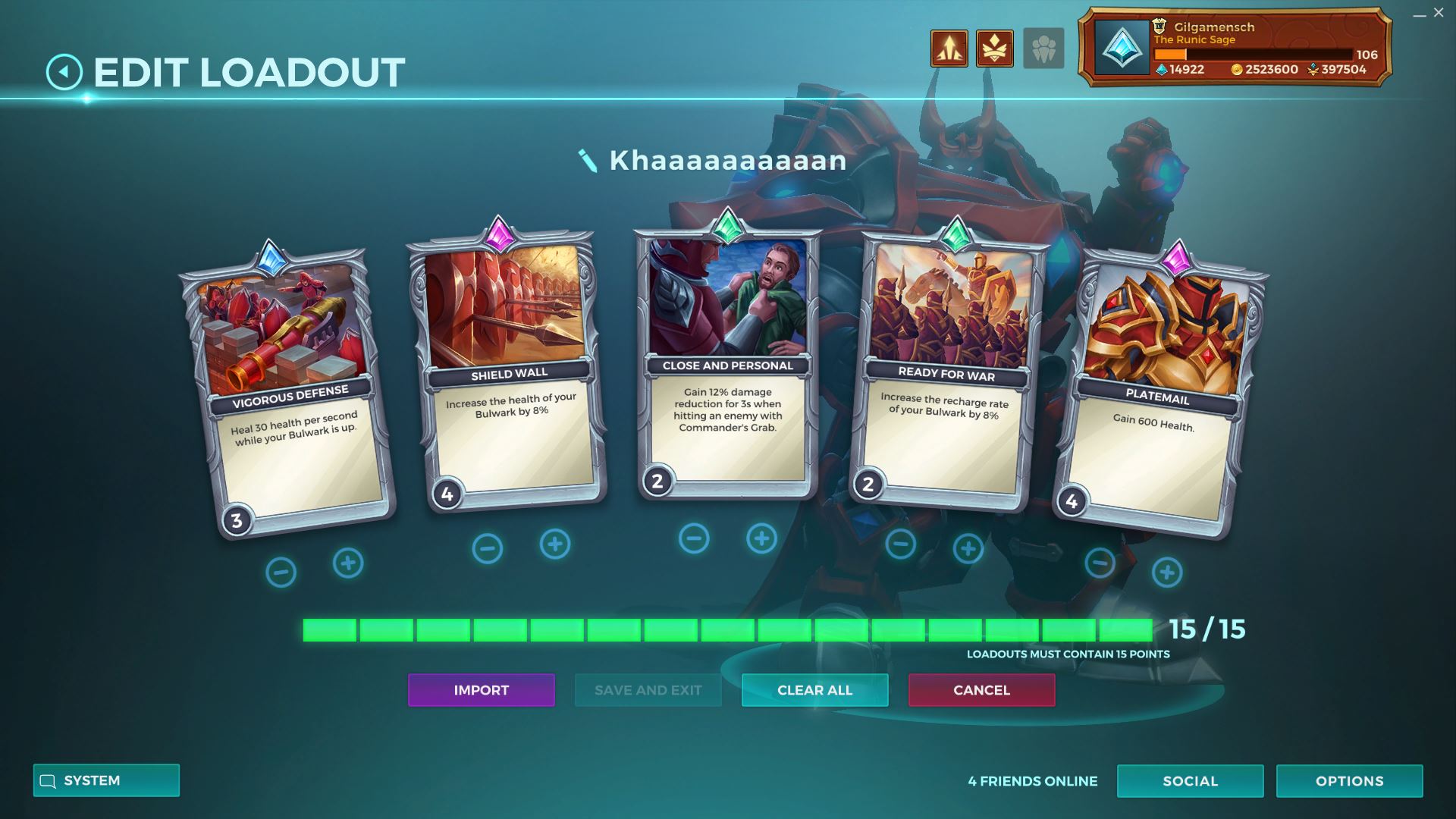 KHAN IS SO FUN. OH MY LORD.

So I’ve finally sat down a bit with Khan. I had a brief spin with him on the PTS, but most of that time was spent grumbling because I couldn’t lock him fast enough. Now people want to play Frontliners, when it doesn’t matter? The story of my life, really. So, let’s talk very briefly about Khan. I’d like to do a video or write up on him later, but first, I do want to say that he is so satisfying to play. Is it just me, or does his ultimate charge pretty slowly? That might be just me missing shots, but it felt a little on the slow side. His Bulwark has a ton of health, he has a heal (that also heals his allies) . . . No, that doesn’t mean you can play Khan instead of Ying. No, please don’t … damnit. As far as his Talents go, Lian’s Shield is a really great one (the starting talent, Bulwark recharges at 60% effectiveness while raised), but my favorite, the one that’s the most fun is Firing Line, and I have a feeling it might get nerfed. “Champions affected by Battle Should gain 20% increased damage and CC immunity for 4 seconds”.  But it’s okay to steal that power from “Thanks, Grandpa”!  No, I’m not bitter. I’m not bitter!

Let’s take a look at his cards too. There are some I think stand head and shoulders above the others, like “Close and Personal”, which gives damage reduction when hitting an enemy with Commander’s Grab.  “Ready for War” helps when you’re using Lian’s Shield, adding more recharge rate to your Bulwark. It just makes me wonder if it counts/stacks with Lian’s Shield. “Hope Guard” increases healing received while Bulwark is up. Stack this with your in-game items, and the strength of the Primus of House Aico will not be denied. My current build is:

This gives health, regen to Bulwark, Regen while Bulwark is up, Damage Reduction. It’s a fun build, but I have a few other ideas, that I’m working on, for more aggressive builds. As far as who I’d like to see him paired with. . . Is it any surprise if I say Torvald? I do think he works with most tanks, but the better choices to me (jokes aside) are Inara, Fernando, Ash. Ying and Seris are probably the ideal healers, but if you have an aggressive Jenos, that could be fun paired with Firing Line. Anything to amplify damage and blast people to bits. I could see Khan potentially being a solo tank with two healers also, since his bulwark, while not huge, will help him at the very least. I like the idea of other tanks being around that have bigger Bulwarks while his is recharging (if it needs it), so tanks can rotate being on the front line. Do I think he might get balanced? Possibly. Do I think he’s OP? Not at all. But, is he fun? Lord yes. His gameplay is satisfying, his gun isn’t ludicrous, the visual display is magnificent. I love Khan, and he might be my next main character. I can see that being plausible.