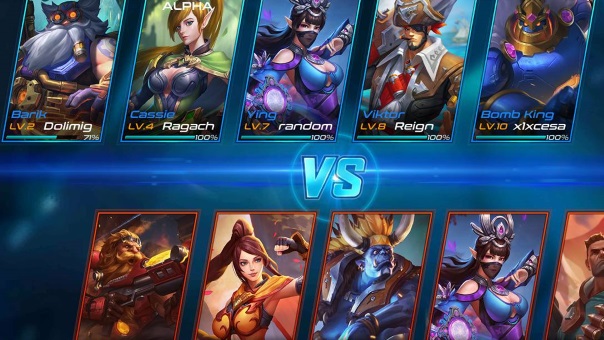 Editor’s Note: This is still in Alpha, so a lot of this is likely to change. This is not an official review. This was the first public test of the game.

The Closed Alpha of Paladins Strike ended last night, or at least, the first one. I do not know what the testing schedule will be, but as I find more, you guys will know more! But Paladins Strike is more than just “Paladins on Mobile”, even though it does have a Payload Mode. Paladins Strike is a top-down, MOBA/Shooter style game in the Paladins universe by HiRez Studios. It had a variety of modes and even had Competitive because we all “try hard” in Competitive. Right? About half of the Paladins cast is in the game as of this build, all unlockable by the “Gold” currency, which you receive 1,000 of every day (again, in this build. I’m sure that’s subject to change). Androxus was unlocked after 7 days of logging in which was neat. About 12,000 or so apiece. The characters abilities were changed/updated to fit into this more MOBA style gameplay, and instead of deck-building, you had a Rune System (ala League of Legends) that unlocked as you went. Once the slot was unlocked, you would spend gold and purchase the Runes, but the currency was not a thing I was short of in this Alpha.

I can't count all these dunks.

So let’s talk Game Modes. Before going any further, let’s talk modes. The “main” mode, instead of it being Payload, is Summon. It’s a 5v5 map, that feels again, like a MOBA. You have three main choke points, and each side has a pair of healing points. These can be targeted/attacked, so the other side doesn’t have one for a duration, which is certainly a tactical advantage. But you hold the points until it charges to 100%, and then a gigantic Juggernaut shows up! You’ll walk it to their base, and it will pound ruthlessly against their walls until it dies or they do. Rinse and repeat. A very simple model, but definitely fun. I like it more than Payload on mobile, that’s for sure. This is also the Competitive mode, so start learning your strats. However, it’s a lot harder to communicate in a mobile game, unless you’re at home all talking on Discord/Skype/Whatever.

Sorry, I didn't get a Siege Screen. Have more Summon!

Next is “Siege”, the Payload Mode. I was hoping to be done with Payload! I play it in Competitive on Paladins because I like trying to win. It’s a little more frustrating on mobile though. However, it’s pretty short, because instead of needing four points to win, you need two points. I have to say though, it really has a weird, awkward path to push to the point, because this is a mobile game and it doesn’t have a gigantic map to work with. The team that gets the point to 100% gets the first point and gets the Payload to push. As in regular Paladins, it only moves forward if only allies are on it. It will move backward if only enemies are on it, you know the drill, Paladins fans. Failure (time runs out, etc) to push the point in gives the other team a point, and now you just have to cap it once to win. In these modes, as you level in-game you can also unlock buffs/passive talents. These range from more damage/healing, faster ult charge, things of that nature. The gameplay (using abilities) is standard for mobile games, with a thumbstick and buttons on the other side. I kind of wish the thumbstick could be moved a little, but I’m fine with it where it is on my screen. When you attack, you point in the direction of the foe and if they’re in range and aren’t shielded, they’re likely to get blasted. It seemed to me that it hit the closest person in range/in that direction. That or I was just very good at aiming …

You challenge Makoa!? TO TEAM DEATHMATCH!?

While I wasn’t wild about playing it on mobile at first, I did enjoy it in the long run because it was so much shorter. I think I had the most afk players in this mode. But that’s probably because of errors/glitches, and less “people just afk”, but I can’t be 100% sure. There will also be weekly rotating game modes, and the one we had at this stage of development was Team Deathmatch. I don’t think I have to explain this, but it’s a first to 30, each kill gives a point. If I’m being totally honest, I’d rather this be the other game mode instead of Siege. Make Siege rotate in and out! I also learned that Ying is incredibly powerful on this mode, and on Summon. This is a really simple mode, you and your team kill the other guys. Love it.

Ready for the Pros.

Instead of the card system, as I alluded to earlier, you have a Rune System. There are three sets of colored slots, with 10 runes a piece: Red, Blue, Green. Red is Aggressive, Blue seems to be Utility and Green for Defense. You unlock these slots by leveling, but you can also spend currency to unlock them early. There are at this moment five levels of runes, which can be purchased and found in your “Rune Bag”. It feels very much like the League of Legends Rune System (which is on the way out), and in lieu of Legendary Cards, there are Legendary Runes that can be crafted with Essence (like in regular Paladins). They have different powers from the PC/console game but serve the same purpose, to change the way they play slightly. It’s very easy to unlock them at this particular build of the game, and I hope they keep it that way. Few things are more frustrating than having to farm and save up for Runes in League when starting out.

Paladins Strike arguably has cooler skins. For some champs, anyway.

One thing I think is interesting is how an IP is adapted for other media/releases. I spoke a bit ago about how I’d like to see a SMITE MMO, and I stand by that one hundred percent. But a more action mobile version of Paladins is a game I did not expect but did thoroughly enjoy. I would rather see Deathmatch as the secondary “main” mode, to change the experience from what we play in Paladins on PC/console, to make it its own game with the same universe/characters to build on. It’s very easy to see what the range of your abilities will be, which is good, the powers work well in this style of game as well. Another feature that I think would be interesting is to have characters in this that are not in Paladins or to reveal them there on mobile first, then expand them to the PC version of the game. I like that the achievements build on each other and give rewards, and of course, I do have to talk about skins. The skins in this game in this build offer a minor stat boost. Well, perhaps less of a stat boost and more of a stat change.

I am sure someone will yell pay to win, but in this particular build, you will have the currency to get the skins. The art for them, the splash art that is, is gorgeous to boot. But if they offer a vast boost and will not be able to be purchased with free/earned currency, I’d be worried about them. But do remember, this is in Alpha and is subject to change. This is the part of the testing where we figure out what works, what’s fair, and what is not. I have enough faith that it won’t become pay-to-win. But I do love that they’re trying to expand on this world and take it in new directions. The only major issue I had was, on my Galaxy S8+, parts of the screen were cut off. My phone has a slight curve where there is more screen, but instead of utilizing it, my screens were scrunched. There were score screens where I stomped, but I couldn’t see my name on them, despite being in the middle of my team. It was disappointing. Not game-breaking, but a bummer. Other than that, it’s been a terrific experience and I’m looking forward to more!