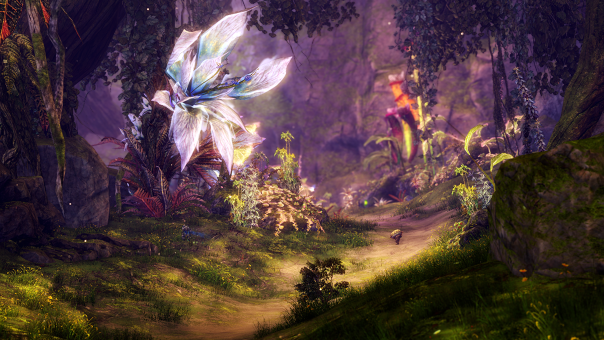 War is Eternal – The latest Living World episode is live now. There is also a sale going for the Guild Wars 2 (Standard/Dexlue) as well as Path of Fire (Standard/Deluxe), for 50% off until May 19th, 2019.

This preview has been on my mind for about a week now. Originally we were going to produce a video on the episode, where I went over my thoughts and what people could expect. But I don’t want to inadvertently spoil anything for this episode, because it’s absolutely wild. We saw all of the cutscenes, so I know exactly what goes down. Instead, I’ll put up some video footage of the area we’ll be going through instead. Since this is the season finale, we’re going out with a bang. If you’ve been keeping up, you know the ultimate goal is a battle with Kralkatorrik, but in Episode 5, Aurene was defeated – she was our only hope to best Kralkatorrik. So what are we going to do now? You’ll group up with your allies to figure out exactly what we’re going to do – if there is anything to do, but it’s not our style to give up. Kralkatorrik has a lot to answer for, and it’s up to us to do something about him once and for all. I recently spent some time with a few of the ArenaNet team members: Jason Reynolds (Senior Designer/Episode 6 Lead), Justin Fassino (PR Manager), Keaven Freeman (Designer) and Lis Cardy (Guild Wars 2 Global Brand Manager), to go over just what awaits in Episode 6.

Ultimately, our goal is to do battle with Kralkatorrik, once and for all, and the staging area for this will be at Dragonfall. You do not go to the area where all the quests and content takes place at immediately. A lot leads up to this in fact, but I don’t want to ruin it for you guys. I will say that it’s 100% worth doing, and this just might be the best story episode I’ve played in Guild Wars 2 yet. There are so many twists, turns, and surprises, that it was absolutely worth doing. After a great deal of story goes down, we find ourselves at Dragonfall, and the area design shouldn’t surprise fans of earlier Guild Wars 2 content. There are three islands and a trip of lanes that lead off of the main island. It will probably feel similar to a particular battle in Guild Wars 2: Heart of Thorns. In order to get ready for this battle, we need tons of supplies. Weapons, Volatile Magic, we need to get this army into shape, improve the power of our team. A lot is being asked of those who stand here, and they need to be as prepared as possible.

Like the Story before this, you have a series of missions, daily challenges and story content to go through at Dragonfall, but it’s not like we won’t be rewarded for our efforts. This content can be completed solo on Dragonfall, but there will surely be plenty of players grouping up and doing the work to get ready for the final encounter. I will say that the final encounters we played through were incredibly easy – not because it’s easy stuff to do, but that it’s tuned for the single-player experience. We were a group of highly-geared players, so we stomped through almost all of it with the greatest of ease. That’s a good thing to me – my personal GW2 character isn’t the highest powered there is, so I like knowing I probably won’t stress too hard, while still being challenged. But if I need it, I can bring a friend or two along, and we can all bask in this story together. I did not see this story coming either. The end is pretty wild, friends. A lot of old allies are going to be here because we’re all in this together. There’s even a new group joining our squad!

There are some pretty fantastic new things to acquire in this update too, such as the Greatsword Artifact/Legendary Weapon, Exordium. I’ve never unlocked a Legendary before in this game, but this one makes me want to. It’s a multi-colored blade, and the colors seem to swirl and shift as you look at it from different angles. It also changes in response to what skill you’re using. It has a variety of looks for different skills and professions. This thing is seriously beautiful. It can turn into various forms, like a Shield or a Scythe, depending on the situation. Seriously, this thing is amazing. I don’t quite know how we unlock it yet (and I wouldn’t go into it here anyway), but I’m going to look into it. There’s also a new armor set to unlock – Mistshard. It’s upgradeable (two tiers), and all three armor styles have access to it. This one is supposed to be more accessible to acquire than the last upgradeable set, released this season. After acquiring it, you can undergo a series of collections to upgrade it to tier two. It’s aesthetic is based on the Crystal Bloom, so I think it will really be popular. At the end of this preview, I have a brief recording of what Exordium looks like, so feel free to take a peek!

There’s also a new mount coming in this update, but that’s not news! We got to spend some time playing with a Skyscale though, and it’s a gorgeous hovering dragon mount. It gets great air, and it’s ability, “Blast” can really help out in combat. Blast is an engaging ability. While on the ground, you can press 1 and it will leap into the air, blast gout of flames onto the ground, and leave. This can really turn the tides in a pitched fight. Since this is a hovering mount, you can hold space bar to take to the sky, and it can also cling onto vertical walls. So you can get as high as possible, glide to a wall, jump up to the side of it, get a little higher, et cetera. This will really make exploring not only Dragonfall but other areas, far more exciting. Their dodge also does a barrel roll, which is just a hoot. But how do you unlock one for yourself? That doesn’t occur until after the story is complete. You’ll unlock a series of collections to work through. It will feel similar to the Roller Beetle, in that you will be helping raise and grow this Skyscale to become your pal and mount. The actual collections are comparable to the Griffon (if not potentially longer), but it seems to be far more straightforward and tied to the area you’re in, so that is nice at least.

Dragonfall is an expansive area, with so much to see and do. I’m pretty excited to do this on the live servers. Even though I know what’s going to happen, we didn’t do a lot of the actual daily missions/objectives for the actual Dragonfall area. We skipped right to the good parts, so now when the servers go live with this update, we can get down and dirty and experience the build-up to the finale alongside everyone else. It’s going to be hard work, but it’s a story worth telling, and one worth experiencing. I also have to say this is the most gorgeous set of areas I’ve yet to play through in Guild Wars 2. I know I said that last time, but somehow, they managed to top it. The Crystal Bloom, while breathtaking, the light that shone off the crystals could be a little galling. This time, it’s all very easy to see. You have an expansive battlefield to take to, awesome rewards to unlock, and a flying mount that should be a little less vexing than the previous one. Even if you missed out on some of the story of the rest of the Living World, this season ends with a thunderous bang! We’re not going to give up on Tyria, not until the last breath.