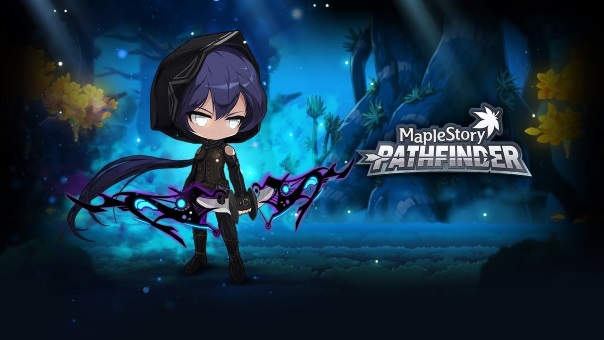 The Pathfinder update is now available! We also have an infographic below with more information!

So, truth be told, I’ve not really played much MapleStory (outside of MapleStory 2), as it’s an MMO that never really caught my attention. But I was offered a chance to get my hands on the Pathfinder class a little early, to see what I thought about it. I had two character slots to play, one at level 30, and one in the 200s. The level 30 had access to a new area – the Secret Forest of Elodin dungeon. So this is the most exposure I’ve had to a high-level class in MapleStory, and if I’m honest? It’s not that bad The Pathfinder has a lot of pros, and once I rebound most of my keyboard to have a more practical MMORPG set-up, I began exploring this cute forest. So, what exactly is the Pathfinder?

The Pathfinder is a ranged character, who has an overwhelming thirst to explore for ancient relics, and of course – kick the stuffing out of surprisingly adorable bad guys. They’re a DEX-based class, who wields a mighty weapon, the Ancient Bow. Their dash is pretty awesome, when they shroud themselves in darkness, dashing through the air. I feel like they’re going to be incredibly useful in a party further down the line when they unlock Obsidian Barrier (Party Buff), but even without that, they are great at clearing packs and thus are a must-have for a DPS. They also seem to have a very high crit chance, which is something you no doubt want on your physical DPS classes. At low levels, they simply obliterate everything in their path, but the longer they go on, the more they need “Curse Weakening”, one of their passives.

You see, the Pathfinder is cursed, and are only able to wield the Ancient Bow. I sort of like this idea, and I’m down for any time I don’t have to grind for incredible weapons. The stronger the Bow gets, the weaker the curse will get, which pairs well with the Curse Weakening Passive. This curse at default gives -20 Status Resistance, -20% Defense, and -20% Critical Rate. By level 4 of Ancient Curse, all of these have disappeared. Since the Pathfinder absolutely stomps its way through foes, as long as it has mana, this is a fascinating way to offer a little balance to them. I did notice I was running through mana and hp pretty fast. However, what makes the Pathfinder so awesome? Cardinal Discharge! This was the primary damage ability for me and shoots homing arrows that melt whatever they hit. If an enemy has Damage Reflection, it won’t target them, so I’ve read. That’s certainly great news.

Split Mistel is another amazing skill, where, when you kill an enemy with it, it conjures another arrow to seek and destroy another target. It will attack up to 8 enemies at 110% damage, penetrating four times. Penetrating an enemy will make two more arrows, so it’s just a flood of damage. Watching my explosive damage go to destroy enemies above me as well as to the left and right of me was fantastic, and very satisfying. I did some reading on their higher-tier skills and man. The Pathfinder does NOT disappoint. I also explored some of the Secret Forest of Elodin dungeon – The video I’ve paired with this includes footage of that area, so you have been warned if you don’t want it spoiled!

I will say that it was a vast, giant dungeon area, with tons of stuff to kill and a fun story to explore. I was very satisfied with it, and even someone like me, who has virtually no idea how to play MapleStory figured out what I was doing with ease. Honestly? The Pathfinder comes pretty highly recommended from me. The Pathfinder will wind up needing to debuff enemies to do really staggering damage, but they do have access to one. They crit often, can melt tank bosses, but they don’t seem to have any stun/root abilities, which would make them far safer. I think their numbers will make it okay though. For the 61+ players, there’s the limited-time event at Adventure Island, but since I don’t really know enough about MapleStory, I did not explore this part as much. There’s a ton of content there though, and I think fans of the game will enjoy it.