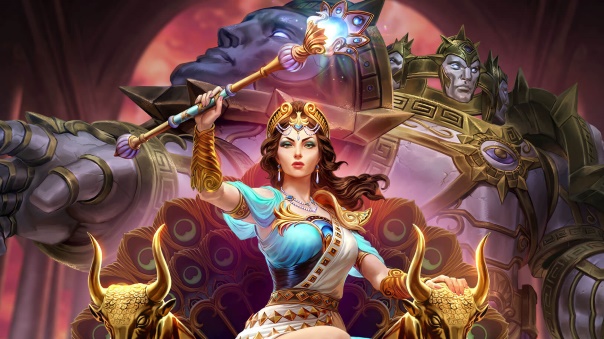 Since there have been no patch notes in a while (due to HRX, that being far more important), instead, let’s have a chat. With the changes to Smite‘s SPL, Cross-Progression/play, SMITE coming to the Switch, and Paladins getting a new champion (with more surely on the way), I’d like to talk about some of this stuff. Much of it I’m incredibly excited for. Other bits, I do admittedly have a little trepidation over. and I’ll surely get into that. I’m also glad as an aside, that there are plenty of people showing up to the Smite streams for MMOHuts’ Youtube, and I plan on doing more Smite/Paladins there as I have the time. But I do have to play other games too! I hope you guys come out for those too. I’m going to try and do some live interviews if possible, and invite some pros/devs on to play matches with me.

I’m interested to see what cross-progression/cross-platform for the Hirez titles. I’m less interested in cross-platform, but cross-progression? I’m very excited for. One of the only reasons (previously stated) that I don’t play on other platforms, is starting over again (and again, and again). But having all of my cool content, builds, et cetera no matter where I go? That’s exciting. While I’m personally not thrilled one way or another about cross-platform, I am excited to see how it affects the Smite Pro League. Will console teams be competing against the PC teams? Or will those still be segregated to their respective leagues? I do not believe that has been announced yet, but man, how wild would it be to see a console team take the main stage for SPL? That would definitely be interesting. Or teams that are part console, part PC? The possibilities are just about endless.

I have to say, I love the Arena rework. Now that I’ve had some time to get into it, it has an aesthetic and design that is far more befitting the most important and challenging game mode in SMITE. I’ve given up asking for Arena Ranked, though. I had a nice long chat about Epip with it, and it seems like I didn’t miss out on very much when it was live. I like the open area, and the biggest change is the Minotaur. The Bomb Guy was kind of dumb, and he would stand there and let people beat him up, while he held a massive bloody bomb. Seems kind of irresponsible, in my opinion. Now we have a giant Minotaur who brandishes an axe. He won’t hesitate to attack players in his path either, so he’s not a pushover. We needed a more aggressive minion, anyway. I am still disappointed it’s not Hera vs. Zeus for the two sides, but Hera vs. Bellona will be interesting if they use it for some lore in upcoming events. Smite has a very rich story, and I’m looking forward to seeing where it goes next. Speaking of “where it goes next”, though. . .

The SPL! Up until Season 6, matches were carried out at home, unless a team had some kind of local gathering place for that, but from what I understand, it was always done online, relying on the player’s internet, which could certainly complicate cross-region play. I’ve played on the EU servers in America. It’s not fun, let me promise you. The big change that was announced is that players will have to uproot and move to the greater Atlanta/Alpharetta area, will receive a salary (which they already received), and all matches will be played locally, at Skillshot Media’s studios. Their studios are pretty damn sweet, but I do understand the EU players unwillingness (in some cases). Many of these guys have wives, fiances, girlfriends, college, or even careers/jobs to tend to. That’s a huge ask to want them to fly across the Ocean, leave behind their life for a year to compete. I think what could perhaps satiate them would be an EU place for their matches to go on at, perhaps near the Brighton location. Would that be more amenable to the EU audience, to only relocate to the United Kingdom instead of North America?

I understand the need to have everyone in the same place, for the most impartial and reliable matches, with everyone being on the same internet, same location, same hardware (sans the occasional keyboard/mouse differences). From what I’ve seen, it’s a pretty fair split between “Excited to move” and “My life is here”, and I respect that. There are teams that would be irrevocably split if this goes through, but it’s ultimately not my place to say what should be. I like the idea quite a lot but can understand why it might be a hard choice to make. If this is something a player wants to make a career, or use as a step forward in their career (perhaps working in esports, for example), it would be a pretty easy choice, unless you have real-life commitments. It’s an interesting decision to make, but I do hope to see some kind of option for EU players other than simply uprooting. Either way, I think it will be an exciting season. This is the end of Obey Alliance in SMITE too, and that means it’s time for another Rosterpocalypse. I hope those players get picked up and want to see some new Smite teams rise up and show what they can do.