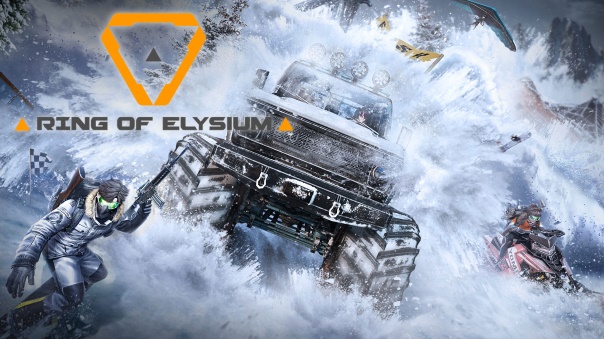 2018 is definitely the “Year of the Battle Royale”. Every company seems to have gotten on the train, and now it’s Tencent’s turn. Their foray into the world of last-person-standing is Ring of Elysium, a winter-themed Battle Royale where 60 players, whether in squads, duo, or solo, create a character, drop into a humongous area and shoot each other until there’s the last person standing. Once the final circle is there, a helicopter ladder will be the way to victory and safety, but of course, there will still be people shooting at you. The final moments of the match are incredibly chaotic and hectic, but everything up until that point can feel slow. My average match I came across two to three players, and that’s with surviving until the final ten or so players. Even starting near other players I somehow still seldom ran into them. 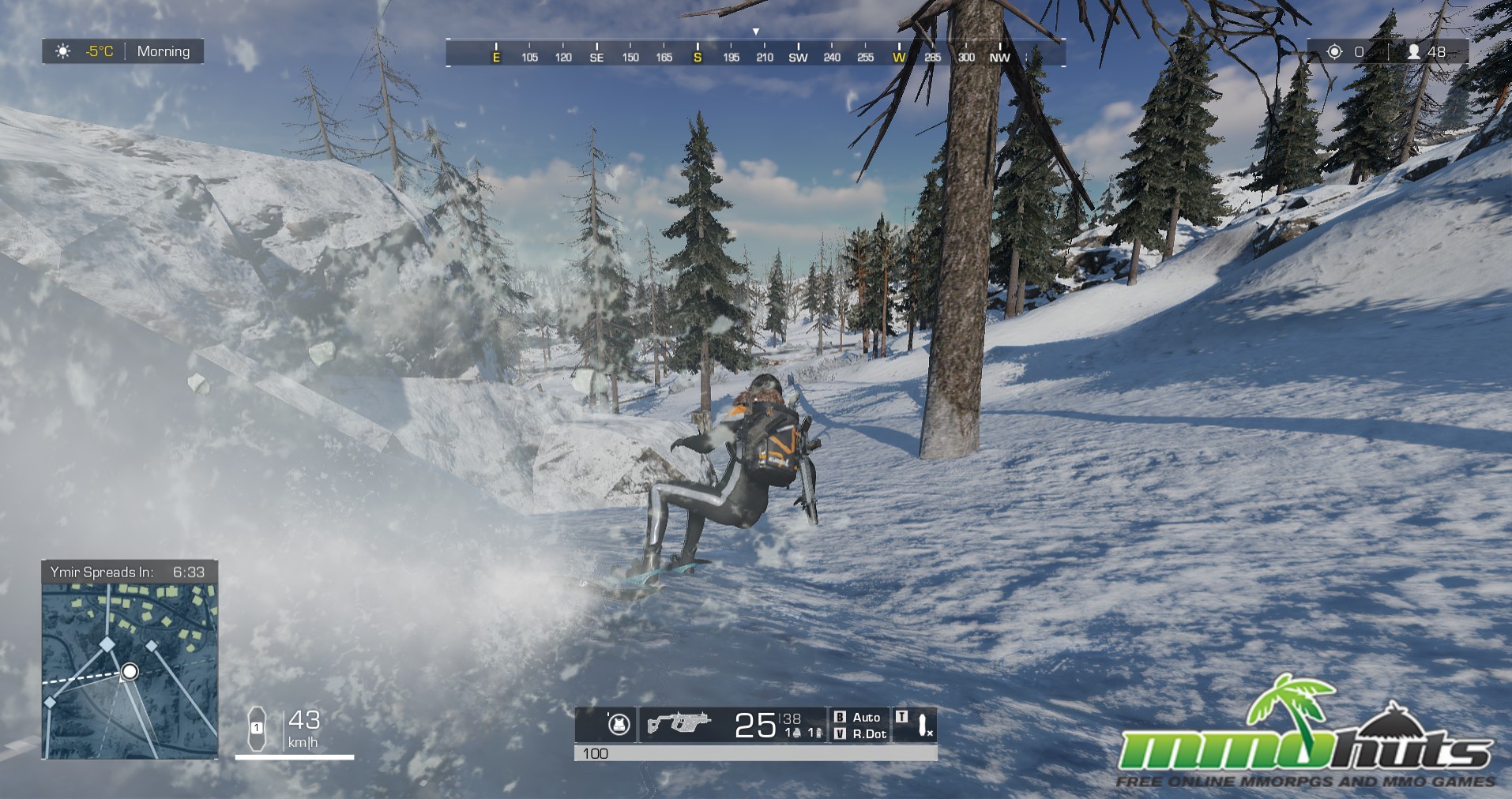 This was so damn fun!

In most Battle Royale titles, you leap from some kind of ship, bus, rocketship, tank, anything that can get into the air. You fly down slowly, at the mercy of people who jumped before you potentially. You scrounge for a single pistol and a few bullets, and if you aren’t careful/skilled, you die immediately because someone got to the shotgun or sniper rifle before you.  I’m not great at Battle Royale games, but I also don’t practice the strategy or shooting. I enjoy them from a viewer perspective, not as much for something to do in my spare time. That being said, Ring of Elysium does do a few very interesting things, that positively and negatively impact the genre and the game itself.

I’d consider Ring of Elysium a pretty casual Battle Royale that anyone can pick up and try, which is a great thing. It allows a very low barrier of entry, and still has a fair amount of room to grow and become skilled. When you queue up, you will pick a style of traversal: Snowboard, Glider, or Pick Axe. These will affect where you will want to drop onto the map, because why would you want to start in the lower, flat surfaces with a snowboard? You won’t get anywhere fast that way (unless you highjack a vehicle). These are very easy to use and there are few things more exciting than sliding down a mountain on a snowboard, hopping off and unloading an assault rifle into someone who wasn’t paying attention. There’s a slight delay on that though, so be careful. On top of that, each movement option comes with a weapon, bandages, stuff to help you as soon as you get on the ground. There’s no minute or two wait for everyone to jump, then watch everyone glide down around you. In fact, you have a map that you can see where players are picking to land. It’s a grid system, each tile being a spot a player can take up. In groups, players can land in the same time. 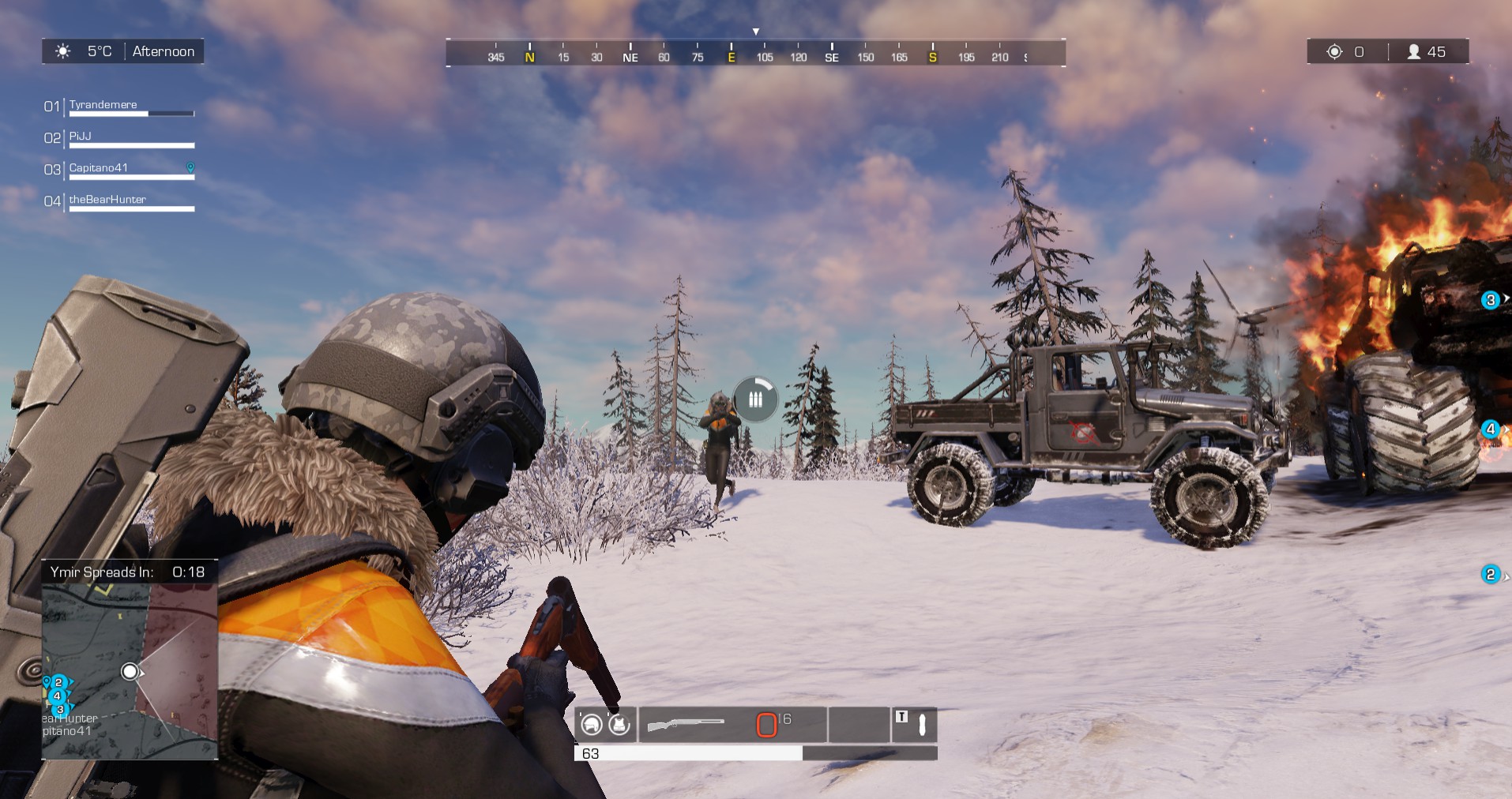 Gunfights around hulking vehicles can be pretty damn intense.

While it’s great that you start off with the ability to pop a few shots in the early game, I do feel like it takes some of the challenge away from the game. Then by the time I’ve looted a house or two, I have three automatic weapons, 200 bullets, a bulletproof vest, a helmet, probably a scope. Ring of Elysium is incredibly generous with the loot it drops you, but it’s still up to you to make good with it. Depending on where you land, you may find yourself quickly in a fight, or perhaps more likely, you’ll need to find a vehicle laying in the snow and drive halfway across the map. But I, as a casual player do appreciate how easy it is to find solid weapons. Most of the vehicles can be entered, and the physics feel pretty accurate in them. If it’s a monster truck-style vehicle, you’ll easily traverse the snow, but the smaller cars will swerve and sway on anything beyond a clear patch of road.

Of course, as the match proceeds, the “Doom Field” will shrink the playfield. In this game, it’s referred to as “The Ymir”, and it’s a horrific cold front. You can see the temperature on the screen, and if you’re within the grasp of The Ymir, you will start taking damage from being too cold. Hypothermia is not a fun way to go out. It’s not a constant stream of damage at least, so you will perhaps have time to get yourself free. Every few minutes, it shrinks, and it’s not a clean cut circle, thanks to the map’s grid structure. Sometimes it shrinks in pretty weird ways, but that just means you have to consider what you’re doing and to always be on the move. Sure, it might be fun to hide in the chairlift with a sniper rifle and shoot anyone you see, but the cold will claim you. The last moments of the map are very frenetic and chaotic, but everyone pretty much has a fair shake at weapons. It’s up to you how to use them. 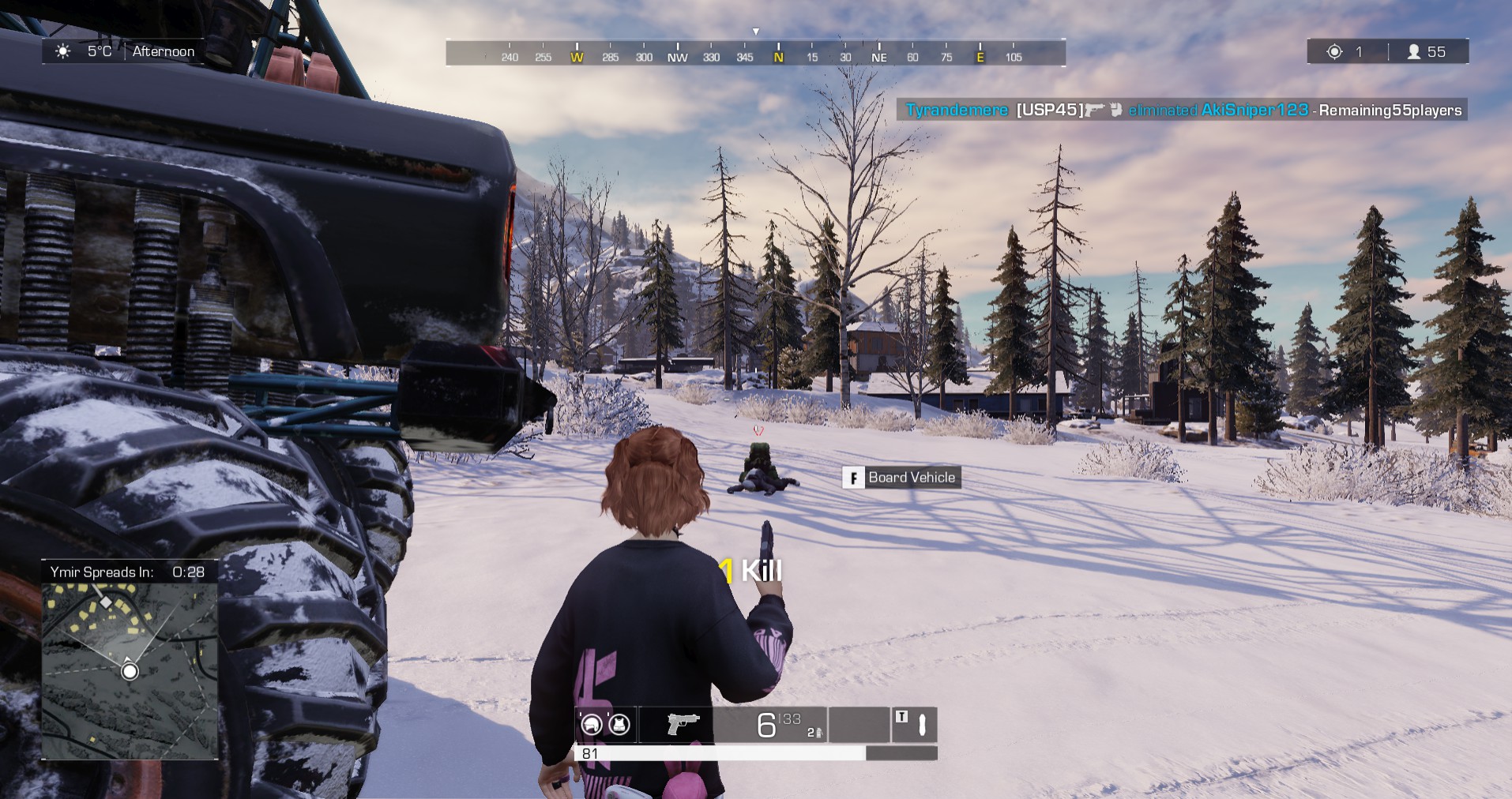 This was so damn fun!

Had I wrote this review earlier, the question I was going to ask is “How the hell is this game monetized?” because at the time there was no way to spend money other than that 2 dollar founder’s bundle on Steam. But on November 8th, they updated the game with their Adventurer’s Pass, and that’s where the monetization is. The current pass is 950 credits (a little less than ten bucks USD), and it comes with a few character archetypes and has more cosmetics to unlock, and at a faster rate. You can still of course play for free and unlock cool cosmetics (skins for your glider/snowboard/pick axe), and clothes for your character, but it in no way confers any special abilities. I’m starting to grow weary of “season pass” style monetization, but I do think it’s better than many of the alternatives. However, it does seem they removed the chests you could spend in-game currency on, which gave random cosmetics, so that’s a weird choice. When I first started playing I loved that because I could farm in-game, and even if I were bad, I could get cosmetics. At least it’s not an Adventurer’s Pass “and” Real-Money Chests.

The combat you expect in a Battle Royale is here. Most of the same guns you’ve come to know are here, and the gameplay is not breaking the mold in any way. However, the setting is only used in one other Battle Royale that I know of, and that’s a game-show. Setting is important to me, and while it doesn’t do anything new or exciting in that genre, it plays smoothly. Being able to pick my spot without leaping and waiting forever is terribly nice, and as a beginner, I found it very easy to leap into. Looting the crate defeated players leave behind is a bit on the slow side, so don’t do it unless you’re 100% certain you’re safe, and of course, when the supply drops happen, there’s almost always going to be someone lurking, so caution should be exercised, like in all Battle Royale games. But they give cool cosmetics and guns. I appreciate that it doesn’t feel insanely greedy at this stage, and is not pushing tons of things to spend my money on. While I’m not wild about the Pass monetization, it’s not paired with other monetization sources, so it’s tolerable. I do feel like some of the tactical possibilities are diminished given the wealth of guns and ammo the game offers you at the start, it does bring potential gunfights to the game much earlier, depending on how brave you are. Ring of Elysium is fun, it’s easy to get into, and it’s overall a solid Battle Royale marred by the occasional glitch or being stuck in the terrain.

The travel items are fun, easy to use and not terribly gimmicky, as they serve an overall purpose in this setting. I feel like the most useful one is the Snowboard, since you have to jump to use the glider, and need to be near a climbable surface in order to use the pick. The only other real thing that mars the game is climbing up rocks or onto surfaces requires solid timing. It felt like I had to stop moving, then press space bar so I could climb up a rock, and this definitely slowed down my exploration. Other than that? It’s solid and progressing nicely.  There are lots of nice little touches that I enjoy, like shooting my pistol on a snowmobile, or swerving around in a massive truck, only to hop out and grenade someone who ran for cover. I’m not great, but I had fun, and that’s what matters.