Heroes of the Storm Updated Review 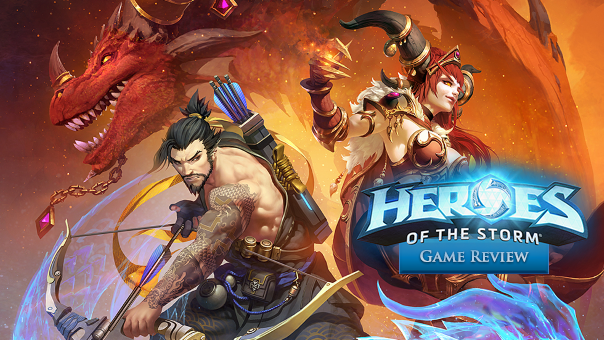 While we have kept up with the latest hero releases and major gameplay changes, it has been a long time since the game was reviewed as a whole. Two years is a long time, and for a game that updates on a monthly basis, there are bound to be massive changes. At its core, it’s unlikely that a game changes but its presentation can always be improved. Heroes of the Storm does exactly this – years of updates have brought us a much more polished game that still remains true to its foundational gameplay elements. Read on to learn more about the latest and greatest version of Blizzard’s MOBA!

Let’s keep this short and sweet; there is no need to reiterate what HoTS is, again. By now, those who are interested likely already have a pretty good idea about the game. In a nutshell: Heroes of the Storm pits 5 against 5 players that work to destroy each other’s bases. This is just like your typical MOBA/ARTS game like Dota 2 or League of Legends. However, rather than just copy and pasting this idea, Blizzard adds their own twists to make the game more enjoyable and accessible for all. There are multiple maps available, each featuring their own unique map objectives. Even with the massive pool of heroes that should be enough to keep the game fresh, multiple map objectives such as capturing shrines allowing your team to transform into a dragon or collecting doubloons to launch cannons at your enemy’s buildings ensure that the game never gets stale. Essentially, Blizzard has taken the traditional MOBA/ARTS, added on their own twist, and made more accessible to the masses. You no longer need 100s of hours into the genre before you even begin to get familiar with the genre.

Can never have enough stats!

So, what has changed over the years? A lot, actually. The game feels much more complete and keeps up with the times as increasingly more games make their way into the eSports scene. Let’s start with the progression system. In the past, we had a capped hero and player level. You could tell how much time someone spent playing the game by looking at these numbers (notice how I didn’t say ‘how good someone is’ as time spent playing a game is different from dedicating time to practice learning the game) but they could only tell you so much. Now, with the uncapped values, you can continue to progress through hero levels and show off massive player levels which is now simply the sum of your hero levels. Anyone over 9000 yet?

Aside from simple changes to the numbers shown for levels, a lot more customization options have opened up in HoTS. Those familiar with Overwatch will find themselves at home with new portraits and loot chests. Loot chests are nothing new to games, even single player offline games are starting to shove them in. Add in custom announcers, voice lines, banners, sprays, and emojis, and you end up with a brand-new game that is perfect for collectors while at the same time being a great revenue stream for Blizzard. Personally, I’ll just stick to climbing the ladder and keep this new progression system as ‘just something extra’.

You never know what you’ll find in your next lootcrate!

Talking about the ladder, gone is the old numbered ranking system and in is the new tiered ranking system. Those familiar with the Starcraft, Overwatch, or even the League of Legends ranking system will already be familiar with this new system. Rather than just having a number as your rank, ranks are now broken up into tiers and divisions. Tiers consist of the normal Bronze, Silver, Gold, etc. groupings we are all used to and divisions break up these tiers into additional groupings such as Bronze I, Bronze II, down to Bronze V.

The old ranking system wasn’t bad but just because someone was at Rank 1, didn’t mean they were equal to all other Rank 1s. While it is nearly impossible to create a ranking system which will perfectly rank people based on their skill, this new ranking system is definitely an improvement over the last. With the Grand Master tier only allowing the top 200 players (or 100 in Team League), you now have a better idea of gauging who the best players in your region are rather than being stuck with seeing thousands of Rank 1s.

The new MVP system is nice, a Play of the Game replay would be amazing!

Ranked play is now broken up into two leagues, Hero and Team, which are meant for random and pre-made teams, respectively. As with most games, Team League can lead to higher skilled games if many high level players decide to play together but it usually ends up being dead as those who are actually serious about getting better at the game will not play with pre-made teams on a public ladder – that’s what scrims or practice matches are for.

Everything about ranked play just feels more modern such as the new drafting sequence featuring hero bans and turn by turn picks. Additionally, ranked play is played across various seasons where players who perform well will be rewarded for their efforts with exclusive items such as mounts.

All’s not serious in Heroes of the Storm: when you need a break from ranked play, it is time to jump into Heroes Brawl. With Heroes Brawl, you play the same game you love, with the same heroes, but on unique maps with their own custom rules and objectives! Heroes Brawl regularly changes what it has to offer and you will never know what is coming next. It could be anything from simple modifications to existing maps leading to drastic gameplay changes, limited hero selection pools, or modified objectives on existing maps. There are even some special modes that reveal themselves every once in a while such as Pull Party where everyone plays as Stiches trying to hook enemy Stiches over to your side (basically, Pudge Wars) or Escape from Braxis which is a full PvE brawl where heroes fight through multiple levels, fighting against Zerg forces. Heroes Brawl gives players a fresh take on the game which can act as a great break from the more competitive ranked play. Plus, it rewards you with free loot every week!

The constant stream of updates we see in Heroes of the Storm shows us Blizzard’s dedication to the game. What was already a great game that was very fun to play, has become an even greater game due to the continuous polish it receives – this has allowed HoTS to keep up with the times. Oftentimes you find yourself with an amazing game that is a blast to play. However, for various reasons, the game is not updated as frequently and overtime its relative goodness begins to plummet. When you already know the market, it is not as hard to create a game that can match or surpass the current market. However, always keeping your game up to date and at the forefront is the true challenge for game developers.

With the constant stream of updates featuring new heroes, maps, customization options, gameplay changes, and more, Blizzard ensures that Heroes of the Storm is here to stay – that is, until the MOBA/ARTS genre gets stale, but let’s be honest, that’s not happening anytime soon.