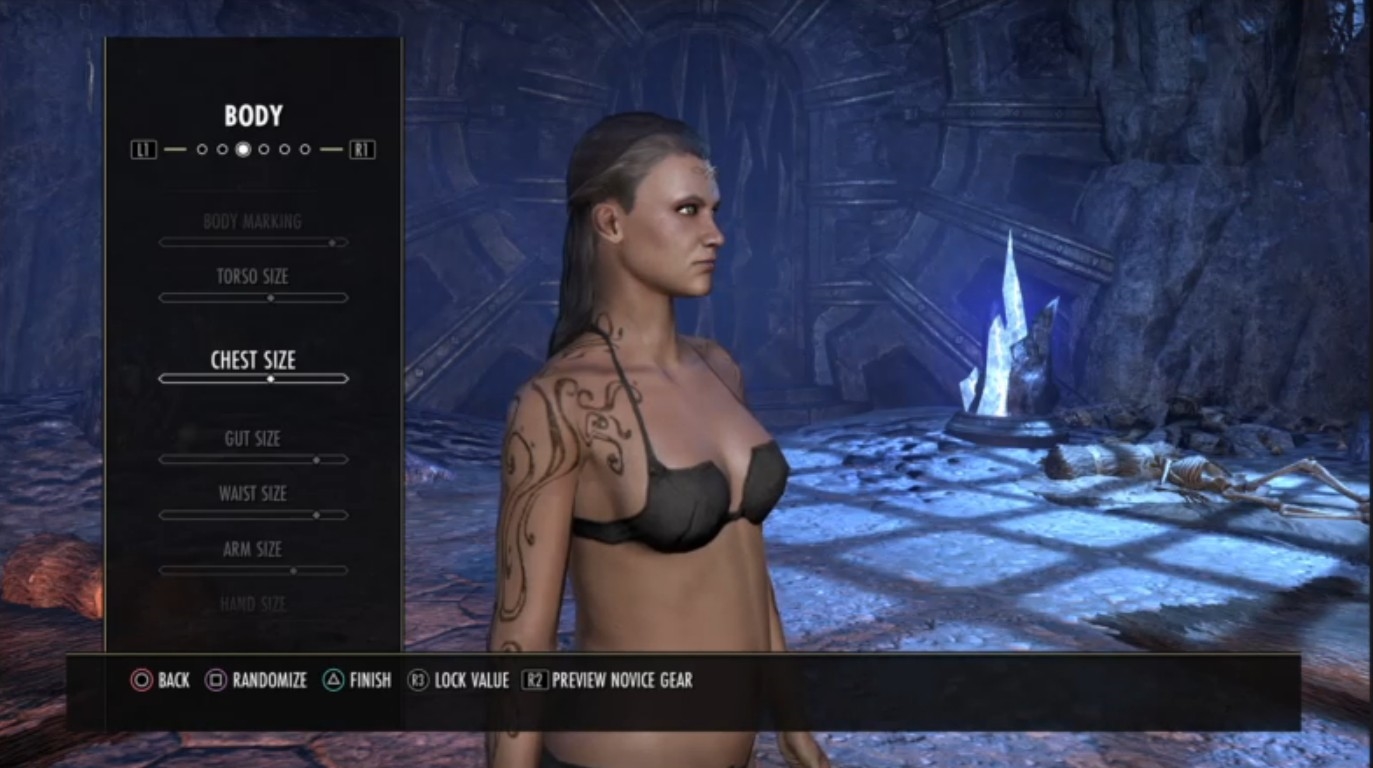 The announcement of The Elder Scrolls Online going subscription-free didn’t surprise many. Its inclusion on consoles, however, may have raised a few eyebrows. “A large MMO like ESO on the Playstation 4? How would that work?” some might have questioned, even though several MMOs have successfully integrated onto the console to varying degrees of success. Well, is The Elder Scrolls Online a success story? Does it, in the wake of the PC version going subscriptionless, meet the same quality? How in the world do you play an MMO with a controller? Having given the game a fair share of time, I can hopefully answer some of these questions for you, and possibly raise a few others in the meanwhile.

Disclaimer: This review was written on a gifted copy of the Imperial Edition. This does not influence the review or its content in any way, shape, or form.

If you’ve never played an Elder Scrolls game before, and are a fan of in depth character development, you’re in for a treat. The sheer amount of sliders and buttons allows you to create an avatar to your exacting specifications. It’s not just typical humans and elves, either (oh, there are plenty of those, mind), but also the lizard-like Argonians and the cat-like Khajiit to play for variety. Nine races (ten if you purchase the Imperial Edition) are available from the start, spread across three factions. You choose from one of four base classes: Dragonknight, Templar, Nightblade, and Sorcerer. Each class can use any type of weapon or armor they see fit, though they each have three unique skill trees unavailable to other classes.

The three factions in the game — the Aldmeri Dominion, the Ebonheart Pact, and the Daggerfall Covenant — each have three races associated with them. The Dominion consists of the magically inclined High Elves, the mysterious Wood Elves, and the Khajiit. The Ebonheart Pact features the powerful Nords, the crafty Dark Elves, and the Argonians. Finally, the Daggerfall Covenant possesses the cunning Bretons, the skilled Redguard, and the mighty Orcs. Players using the Imperial edition of the game also have access to the Imperials of Cyrodiil, who can join any faction they choose.

We do need to get one thing out of the way here. The tutorial is long and boring for anyone who’s played the PC version, and it’s also mandatory for your first character. Important topics like movement, combat (offense, defense, and interrupts are all covered), and leveling your character are covered. Other facets, such as sneaking, dodging, and monster difficulty are also touched on. However, don’t expect the tutorial to cover everything.

A sort of “second” tutorial awaits you once you’ve left the tutorial dungeon, which sends you to your faction’s newbie area. Here you will learn all about quest cycling, and get your first real taste of exploration across the game, since there are many things off the beaten path to discover (and achievements for those that do).

Why Is the Rum Gone a.k.a Get Me More

Run-of-the-mill is an apt description for quests in Elder Scrolls Online, at least early on. A lot of your experience in Elder Scrolls Online revolves around talking to NPCs who have you talk to other NPCs, who might have you fetch an object for them, or send you to talk to yet another NPC. Each zone of the game has its own storyline, which is nice, but the presentation often feels disjointed or scattered. While quest indicators have become a staple in recent MMOs, players can only find nearby quests through their UI radar, and only when they’re relatively close. While this is designed to permit a sense of exploration, newer players may miss complete areas simply because nothing directs them to go there.

Thankfully, what the game lacks in quest variety, it more than makes up for in the sheer amount of dungeons. Groups of various sizes (most typically four) can tackle these challenges, defeating powerful foes and earning very nice equipment along the way. Each dungeon also offers a variety of additional bonuses for completing them, such as achievements, additional quests, and more.

Each level you gain in The Elder Scrolls Online offers two choices: what primary stat (Health, Stamina, Magicka) to improve, and where to spend a new skill point. Health increases your hit points, and the healing you can receive. Stamina increases the number of times abilities like melee attacks, sprint, dodging, and sneaking can be used. It also increases damage dealt by non-staff weapons. Magicka allows you to cast more spells at opponents, and influences staff damage. All three stats regenerate over time, though at a much reduced rate during combat.

As mentioned before, each base class has access to their own class skills, and also access to every weapon and armor skill tree. Skills have levels of aptitude, and new skills and passive abilities require a certain level to unlock. Each individual skill can also be leveled up, leading to a lot of confusing numbers very quickly. Skills can also be changed once the level of the skill is sufficient; each has two different “morphs” they can change into, which can vastly change one’s playstyle.

Skyshards can also be found throughout the game, which offer players an additional skill point for each three collected. You gain one automatically in the tutorial, and each area has quite a few to find, so you will eventually have a lot of skill points to use. At the beginning of the game, of course, each point feels much more important.

Khajiit Has Wares if You Have Coin

Crafting in The Elder Scrolls Online is surprisingly deep. At its core, you select your ingredients, and craft a piece of equipment that you can use or sell to other players. Crafted equipment is quite useful, though trying to keep up with crafting will take a lot of raw materials. Raw materials can be found quite readily out in the world, and range from ore and wood, to flowers and runestones. There are six crafting professions: Alchemy, Blacksmithing, Clothier, Enchanting, Provisioning, and Woodworking. Each character can learn all of the crafting skills, and there are no equipment requirements needed either.

Magical items of all types can be used to research various equipment enhancements. These typically do take a fair bit of time to complete, and they destroy the piece of gear, but being able to add your own enhancements to gear is very valuable. Alternatively, equipment can be broken down into base components (with varying degrees of success) for players that don’t want to gather as much raw material. Finally, each race has their own style of gear, all of which look unique even on the same piece of gear. You can find tomes that will teach you the other racial styles, so you’re not limited to just crafting your own.

Bonding With Friends Through Destruction

It’s hard — impossible really — not to compare PvP in The Elder Scrolls Online to Dark Age of Camelot in its prime. Your faction seeks to control the Imperial province of Cyrodiil against the other two, controlling key areas and utilizing siege warfare to capture locations. In addition, powerful artifacts known as Elder Scrolls can be captured from your opponents to give your forces a major benefit. There is also several PvE encounters to be had, making Cyrodiil a well-rounded area. Players can enter the battlefield at level 10, and will be scaled up to level 50 so they have a chance of survival. Higher level players will still have the advantage of better gear, higher level skills, and passive abilities.

Players gain Alliance Points for participating in battles and securing objectives. These points can be used to purchase equipment, siege weapons, or to join a new campaign instead of the one in progress. The player with the highest contribution when their Alliance holds the six main fortifications of the Imperial City (at the center of the map) will also be named the Emperor. Emperor players have their own skill line that gives them a massive boost to PvP combat, such as increasing their max health, improving siege weapons, and more.

What Do You Do When You’re Done?

Once you’ve reached level 50 in the game, you unlock Veteran levels. Simply put, this is a system of advancement after the level cap, allowing players to tackle content from the other two factions at a higher difficulty. Dungeons and quests will have a different storyline to them, allowing you to see the world differently. There are currently 14 Veteran ranks, each of which will take one million experience to reach.

PvP is also an option for the level capped player, and PvP has the added benefit of also helping with a player’s veteran rank. There is also Craglorn to explore. Designed for groups of four, this zone has players discovering the mystery of the disappearance of the constellations. Finally, there are 12 person trials to overcome for people that want a larger group experience.

Wow, What A Difference!

While the PS4 and the PC version of the game are fundamentally the same, there are some key differences. Console players used to single-player Elder Scrolls games such as Skyrim will find the UI in The Elder Scrolls Online quite similar. The UI is also optimized for large screens. The game obviously uses the PS4 controller versus the traditional mouse-and-keyboard setup for the PC. Combat works remarkably well, since ESO only offers five skill slots plus your ultimate ability, matching the controller face nicely. The PS4 version also possesses a Group Finder option, with several options available to get you the right group for the content you wish to do.

Voice chat has been added on the console versions of the game, and there is no turning it off. You can, however, reduce the volume of the voice chat to zero in the options menu, which is very useful in larger, crowded areas. There is no other form of chatting with players outside of simple, pre-made phrases and emotes. Considering the PS4 can utilize a USB keyboard, this exclusion is a little baffling. You will also need an active Playstation Plus account in order to play The Elder Scrolls Online, which somewhat negates the experience of buy-and-play ESO offers. Still, PS Plus offers several other benefits such as free games every month, so the cost is offset somewhat by the value you receive.

The Elder Scrolls Online is a good game in its own right, but it does fall a bit short. While incredibly similar to its PC counterpart, the PS4 version does suffer from “always on” voice chat — some people don’t want to be heard, and others probably shouldn’t be — and a distinct lack of keyboard support. The game also suffers from some pacing issues, which has been an issue since the game’s original release. The need for purchasing a game copy at full price in addition to requiring a Playstation Plus account may also turn many away. The general lack of endgame variety may be a death knell for others.

Still, the game itself is rich in Elder Scrolls lore, and being able to experience all three factions’ story instead of locking yourself to just one are definite positives for the game. Its powerful crafting system definitely adds to the charm, and combat is quite slick and intuitive when played with a controller. The cash shop is completely cosmetic, so there is next to no pay-to-win options going on – with the exception of the Imperial Edition offering the arguably best race to play, the Imperial.