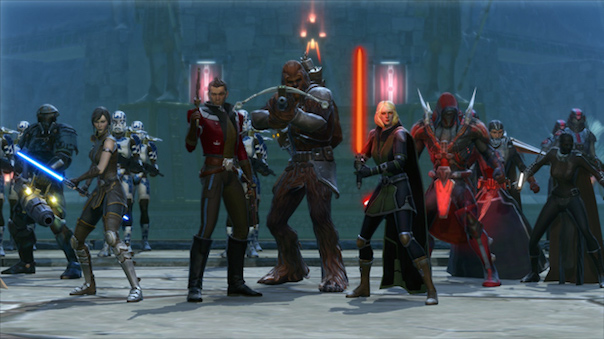 Last week I had the pleasure of attending a Star Wars: The Old Republic event at EA’s headquarters to preview what’s to come in the fourth expansion to the current Star Wars MMO: Shadow of Revan.

To briefly summarize what Shadow of Revan is all about: Revan is back, and he has plans to change the galaxy. He has raised an army of followers, and you need to stop them at any cost. Revan always seems to have been lurking in the shadows since the initial release of SWTOR, with nods to devoted followers scattered here and there, but this expansion is set to make his return official. He’s amassed a fleet and well equipped trained army that both the rebels and empire are threatened by.

As Misanthropologist wonderfully wrote up last month, Shadow of Revan is like a return to form for BioWare in terms of narrative and goals for SWTOR. At the EA event, it was heavily stressed that the deeper personal story would return and loose ends would be tied up. From what I saw, and played, this is very apparent: The personal stories and choices return, the cinematics are back, and the dialogue and writing, with all of its twists, are well done. 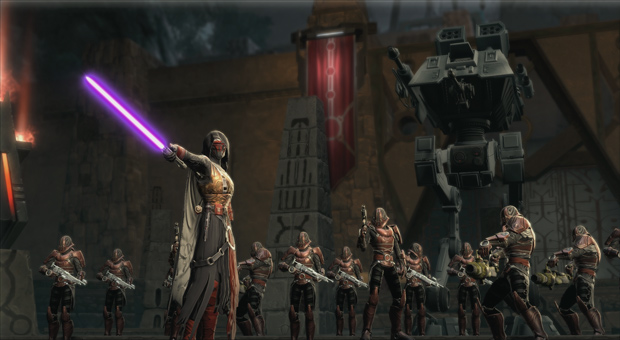 Being the second story driven expansion for SWTOR and focusing on one of the most beloved characters of the expanded universe sets up a lot of expectations. As an expansion to an MMO, Shadow of Revan needs to extend the existing content enough for existing and new players, and as a partial extension to KOTOR it needs to satisfy fans and wrap up everything with Revan neatly. The question is: Will Shadow of Revan live up to the expectations of both SWTOR players and KOTOR fans alike? For better or worse, I think Shadow of Revan will be ‘pretty good’ in the eyes of the former, but disappointing for the latter.

From what I saw and played, Shadow of Revan ticks all of the boxes for a solid MMO expansion. New instances, cities, and explorable regions? Check. More quests, companions, dungeons, and bosses? Yup. More powerful gear and re-balanced PvP? Done. The core game mechanics, feel, style of writing, and artistic vision maintained? You bet. But is it a fitting end for Revan and a good framework for future expansions and content? That remains to be seen, but is certainly expected.

Revan is a fan favorite icon of the extended universe, and BioWare has been touting that this will be the final chapter for him canonically. On one hand we’ve (sort of) heard and seen that before, but on the other (if it really is the end) will it do KOTOR fans and Revan justice? For Star Wars fans everywhere, I hope the end for Revan will be well crafted, but I think it won’t be as good as we want it to be. 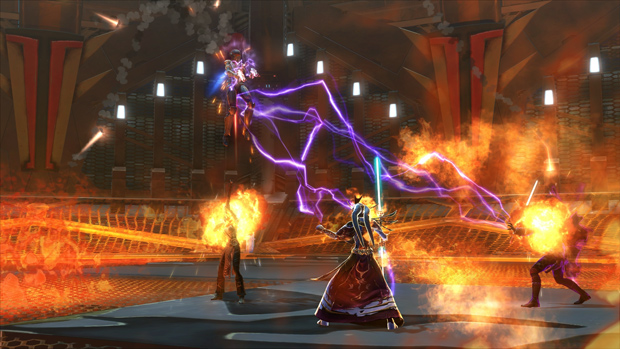 You’re going to play through a lot of cool fights in Shadow of Revan.

Enough about Revan. Let’s talk about the actual expansion.

The biggest change in the expansion is the revamped skill trees – they’re no longer trees at all. Instead, each class has three disciplines, or rather, combat style paths aimed at filling out builds like maximum damage or maximum healing. Each path is an in-order switchbacked line of buffs and abilities that you put your skill points into – it’s very easy and simple. Each class has up to four new abilities with this discipline system to compliment the raised level cap.

The level cap is now 60, up from 55. In addition to the new skills, the raised level cap brings with it two more places to explore and new sets of gear to loot. The first of the new locales is Rishi – home to pirates, smugglers, and hidden bases. The other, which hardly needs an introduction, is Yavin 4: it’s tropical, out of the way, and the deathbed to many Jedi. It should come as no surprise that it’s also a hub of Sith experiments. In these new locales are new flashpoints, which can be done solo or in a group, and new 8-man and 16-man operations.

The content in the expansion quite varied – lots of different missions and cool fights await players. At the event, I encountered lots of different enemies and bosses including hordes of Revanites and an ATST, and teamed up with Theron Shan to uncover Revan’s plot to change the galaxy. Of course, there’s a lot more in the expansion that we couldn’t get deep into at the event – so look forward to going through it all yourself.

For the most part, Shadow of Revan looks and feels like the original content in SWTOR. If you’re a SWTOR player and enjoyed your first few dozen hours of playtime or have hit the current level cap and want to continue your story then you will certainly enjoy Shadow of Revan.

Pre-orders for the expansion are available now for $19.99 and is only available digitally, and those who preorder it before December 1stwill also get the first expansion, Rise of the Hutt Cartel, and a 12x experience boost. The normal release is scheduled for December 9th. Get full details on the official site.