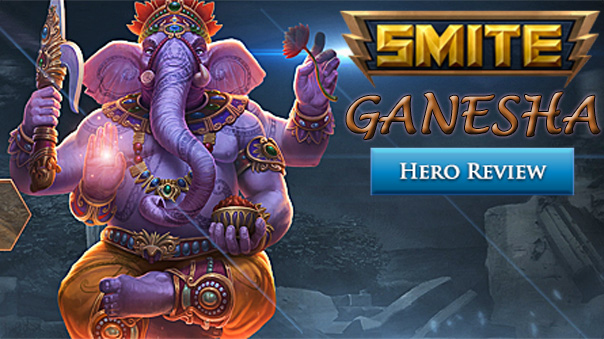 So, I’ve known Ganesha was coming to SMITE since HRX 2017; but we weren’t allowed to talk about it. We knew it was going to happen this year, and that he was going to be incredible.  Little did I know they weren’t just pulling our legs between interviews. However I’ve been waiting so long for this Guardian to come, and he’s here, bringing success.  Just who is Ganesha anyway? He’s the latest Hindu God to hit the Battleground, the Obstacle Remover, and the God of New Beginnings.  He’s probably the widest-worshipped God in the pantheon, and he even extends out into some Buddhist/Jainist teachings. He smashes through all obstacles, and no matter what name he goes by, Ganpati, Ganesha, or others, he still represents change, a new beginning, and success. And so his large body comes crashing into the Battleground of the Gods, complete with awful puns born on all four shoulders. I’m just going to say it: I love Ganesha.  He’s the kind of tank I’ve really been waiting for. He’s got a fun, unique, CC packed kit. You can quite easily build him damage, and I forsee solo-lane Ganesha or possibly jungle Ganesha, thanks to the new items and changes this season.

They really took the “obstacle smasher” quite seriously, because his kit really goes hard on that, with one ability in particular. His charge ignores all player-made deployables! Ymir walls? No problem! Terra walls?  Consider them ignored! Cabrakan giving you grief? You’re still probably dead anyway! It’s quite magical. I’ve heard more than a few people complain about his ult, since it’s just damage/slow, no root, no stun, no charm, nothing.  You’re looking at his ultimate the wrong way though. His ult has so much damn utility AND damage. Being chased/someone on the team being hunted?  Throw it in their way to slow or stop them completely from going after you.  Use it to set up a Poseidon ult, an Odin cage, an Ares ult, all sorts of ludicrous things.  He’s the Guardian you bring to a kill-lane, not a farm lane.  You need Cernunnos to get fed? Uppercut that Ullr into the sky and silence him as soon as he hits the ground! There are so many combos…

Passive: Good Fortune [Buff]: Whenever Ganesha gets a killing blow, the nearest allied God receives the credit and instead, Ganesha receives assist gold. In addition, he gains +20’ radius for assists, and the time is increased where he can gain an assist goes up by 5 seconds.  He can get kills though, if no one is nearby and he gets the killing blow, and I do believe it has a cooldown, so he can get kills, but it’s unlikey that it will happen all that often. Your Hunter, your Jungler, your Mage will thank you. Solo laners never thank anyone.

2: Ohm [Cone, CC, Buff]: Ganesha assumes the Lotus Position while hovering in the air, and chants the sacred sound, Ohm. He is slowed, but can move in all directions. The cone in front of him is a silence, and the remainder of the area around him is a buff to allies, increasing Physical Protections [20/30/40/50/60].  As long as they are in the cone, they remain silenced.

3: Remove Obstacles [Dash, CC]: Ganesha charges forward, and hooks the first enemy he comes into contact with using his goad. He drops a vicious combo, before ending it with an uppercut, knocking the enemy up into the air! While he’s dashing, he moves straight through all enemy deployables. You cannot hinder him!

Ganesha brings a ton of control to the field, and everywhere he is, trouble will surely follow. I personally don’t think he’s one of the best Guardians in the game right now. Almost everything he does slows, stops, knocks up, or elsewise hinders the enemy team. Sure, he can go on his own, but he’s way more efficient when he’s setting up a kill for someone else, slowing someone else, preparing hilarious combos for kill securing. Like knocking up someone, guaranteeing that free kill for Awilix. There are a few schools of thought that I’ve seen for Ganesha. He already has a really good health pool, so I’ve seen people just build him pure damage, go to a solo lane or elsewhere, with maybe one or two protective items. Personally, I look at him as a pure support. I mean, his Passive gives his damn kills to someone else! Don’t be so damn greedy! Build support, build tank, and build utility. The only way I can see him being damage is if you’re running two tanks in Smite [which is weird but still effective in season 4].

But when it comes down to actual “things I need on Ganesha” I find myself torn. Of course, these change if the other team is not Phys/Mag heavy, so as always, take it with a grain of salt.  Depending on the circumstances, I want certain items. Some of the only “must-haves” for me is probably Breastplate of Valor, or Shogun’s Kusari.  They’re both very heavy on useful stats, have CDR, and one defense or the other. I’m also very partial to Mantle of Discord or Gem of Isolation.  Mantle has a ton of defensive stats, has a brief stun/cc immunity – it’s really just all around good. I tend to get it towards the middle of the game though, when I start meeting more and more of the other team. Gem is just a fun one for damage, that or Void Stone. Gem I think packs more of a punch, but Void Stone is the safer bet for protection. One of the Hides [Nemean Lion or Urchin] but honestly, I tend to play it safer and go with Nemean Lion. I’m not wild about stack items, and for someone like me that’s always up in their face, Nemean Lion’s the go-to. You can silence enemy’s abilities but they can still auto-attack you, so why not punish them a bit for it?  I keep Pestilence on the back burner, because I never fucking know when I’m going to come up against a heal-heavy team, and that’s what I use to put the kibosh on that post-haste. Another defensive item I’m very fond of on Ganesha is Spectral Armor, because of that occasional fear, and the massive +70 Physical Protection and 300 Mana. But if I had to settle on one build…

Boots [Tanky Boots preferably], Breastplate of Valor, Shogun’s Kusari, Mantle of Discord, Hide of the Nemean Lion, Bulwark of Hope or Void Stone. This provides me ludicrous defense, enough to get into any backline and cause a ruckus.  As far as Relics go, I like [in no particular order]: Meditation, Frenzy, Horrific Emblem, and Heavenly Wings.

Ganesha excels in being a disturbance. He’s big, can bodyblock lots of stuff, and has an absolute horde of disruptive parts of his kit. That’s what makes him so damn great. He’s the ideal support, shy of having a heal too. And you can always pack Meditate if you think they’re going to need it [they will]. If you’re careful with what you use your abilities on, they can never cage or stop you from getting to your pals when they’re in need. Ymir try to wall you from the jungle so you can’t get back to lane? Not anymore, jerk! Just dash through, and if he’s close enough, give him that knockup. Personally I’m a fan of confirming the dash, immediately dropping the silence so they can’t counter, and if it’s time to kill him and his friends, ult down around them, securing them right where they are. Sure it doesn’t “have a stun” or “have a root,” but that’s not what it’s for. It’s to slow/stall them just long enough for a secured kill. It doesn’t do tons of damage [unless you build for it], but it will make most players think twice about diving through it. There are definitely Gods I think he works exceptionally well with. This is not all-inclusive mind, because I’m no pro. These are just lanes that I think would be hilarious and frustrating to deal with.

All told, Ganesha will be the fourth Guardian I take to Mastery X, because I really dig how he works all around. His kit is appealing to me; it’s one that isn’t incredibly greedy. It’s literally a Guardian whose job it is to make sure his friends succeed. That’s how I am as a person, that’s what I want in a Support Role. He’s here for his friends, he gives them kills instead of keeping them for himself. He knocks the other carry into the sky to make sure they land on that trap, or get kept behind a wall. He can silence just long enough to make certain the jungler gets into position. He can slow their whole team with the greatest of ease, or set the ult in front of their escape to prevent/slow it down. If you master it really well (perhaps you’re an Old Nu Wa main that’s been lying dormant?) you can even use the corner pillar to body block escaping enemies in narrow passages! The God of Success is here to carry you across all four of his broad-ass shoulders, and make sure his team is happy, healthy, and most importantly, victorious.