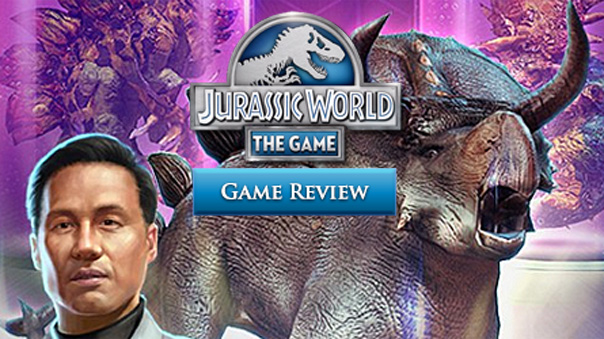 Jurassic World: The Game is a free-to-play simulation-strategy game for both the iOS and Android platforms from Ludia Inc. The game puts you in the shoes of one of the people who runs the park to make it both profitable and operational. It seems that the game’s timeline (if you call it that) is between the re-opening of the park and the actual Jurassic World movie. 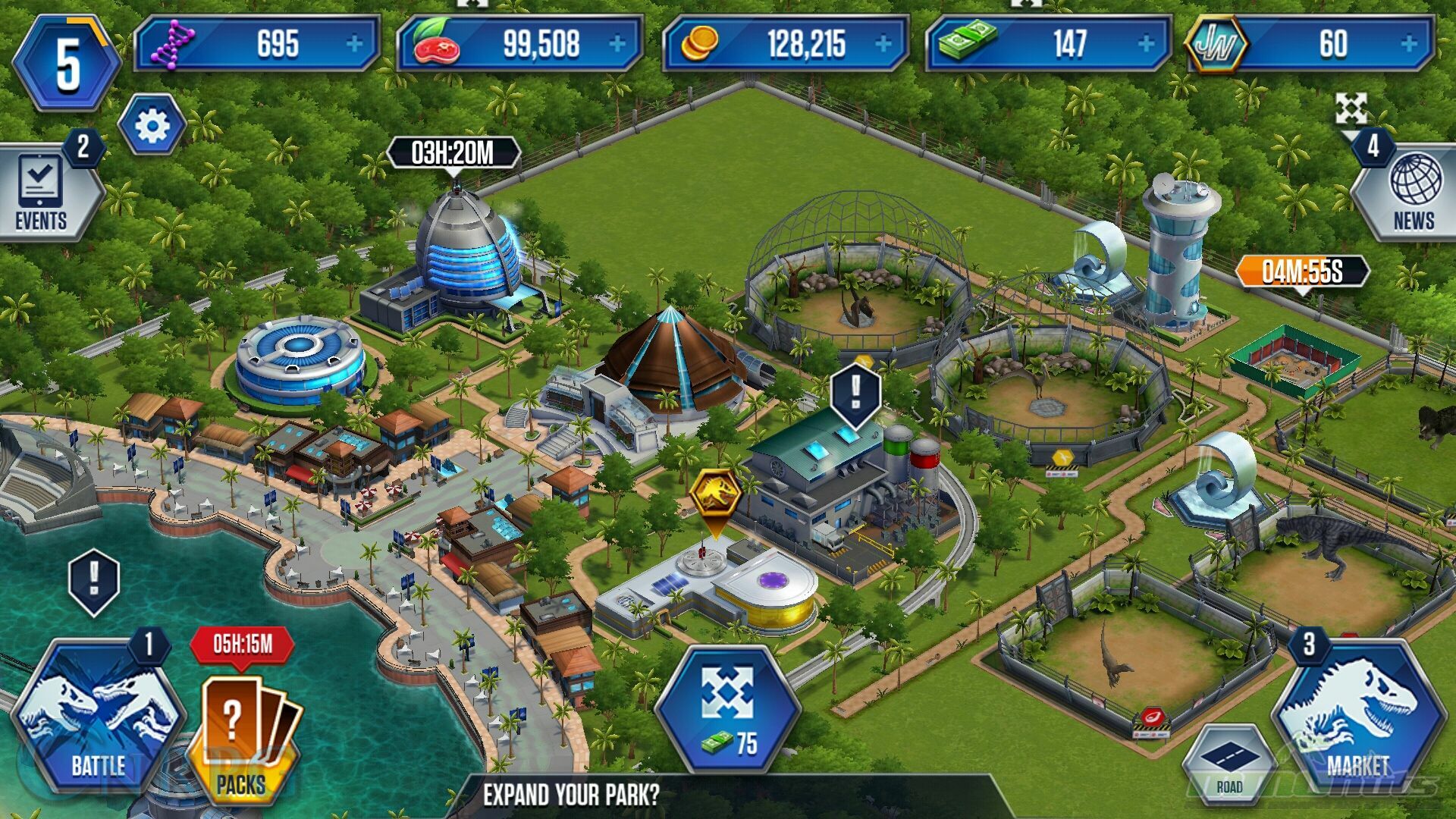 Managing your limited space can get tough.

Jurassic World: The Game contains all the staples of a simulation title. As the park’s operation manager, you will be tasked to collect resources and create dinosaur attractions. You will also need to collect food to increase the level of your dinos and even “hatch” dinosaur eggs to add more attractions for park patrons.

With the game giving you just a limited set of resources to gather, you are going to focus on adding dinosaur attractions and clearing the surrounding forest to provide more space for each dinosaur habitat (which really takes a lot of space). Aside from the aforementioned resource structures and dino attractions, you also need to consider adding other non-operations related structures to increase your park’s income generation but also dinosaur experience gains.

There’s one game feature however that makes Jurassic World: The Game a bit unique compared to the other titles in the genre. And that would be the game’s eTCG style of pack opening. 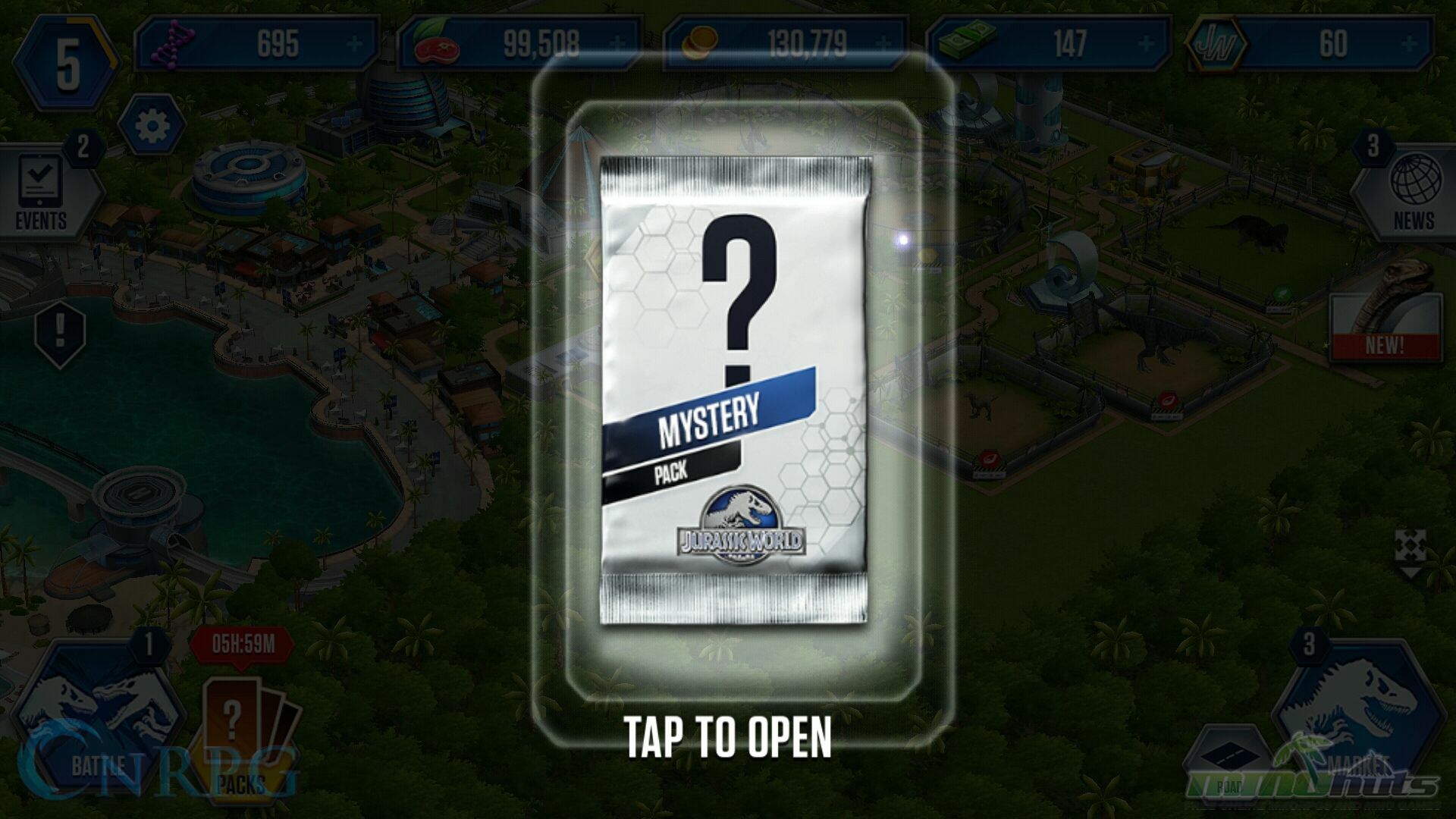 May RNG favor your DNA splicing.

Jurassic World: The Game isn’t just your typical run of the mill simulation-strategy game. The game also incorporates an eTCG gameplay system by requiring you to unseal packs to get to discover new species of dinosaurs that you can hatch in-game.

This is clearly the feature that would be the game’s cash-in system as you are given options to purchase more “premium” packs by paying for them in cash through your chosen store.

These packs work just like the typical hard copy packs where you get a dinosaur, gold, DNA bits and even food. Depending on your luck, (or at least, the game’s RNG system), you will be rewarded with higher rarity dinosaurs that you will need later in the game.

Also, since this game is a free-to-play title, you have to expect that you will be continually bombarded with promo ads in buying certain packs within a certain period. While, normally I can ignore it on other titles, I just want to appreciate that at least it’s a bit tastefully done in Jurassic World: The Game. 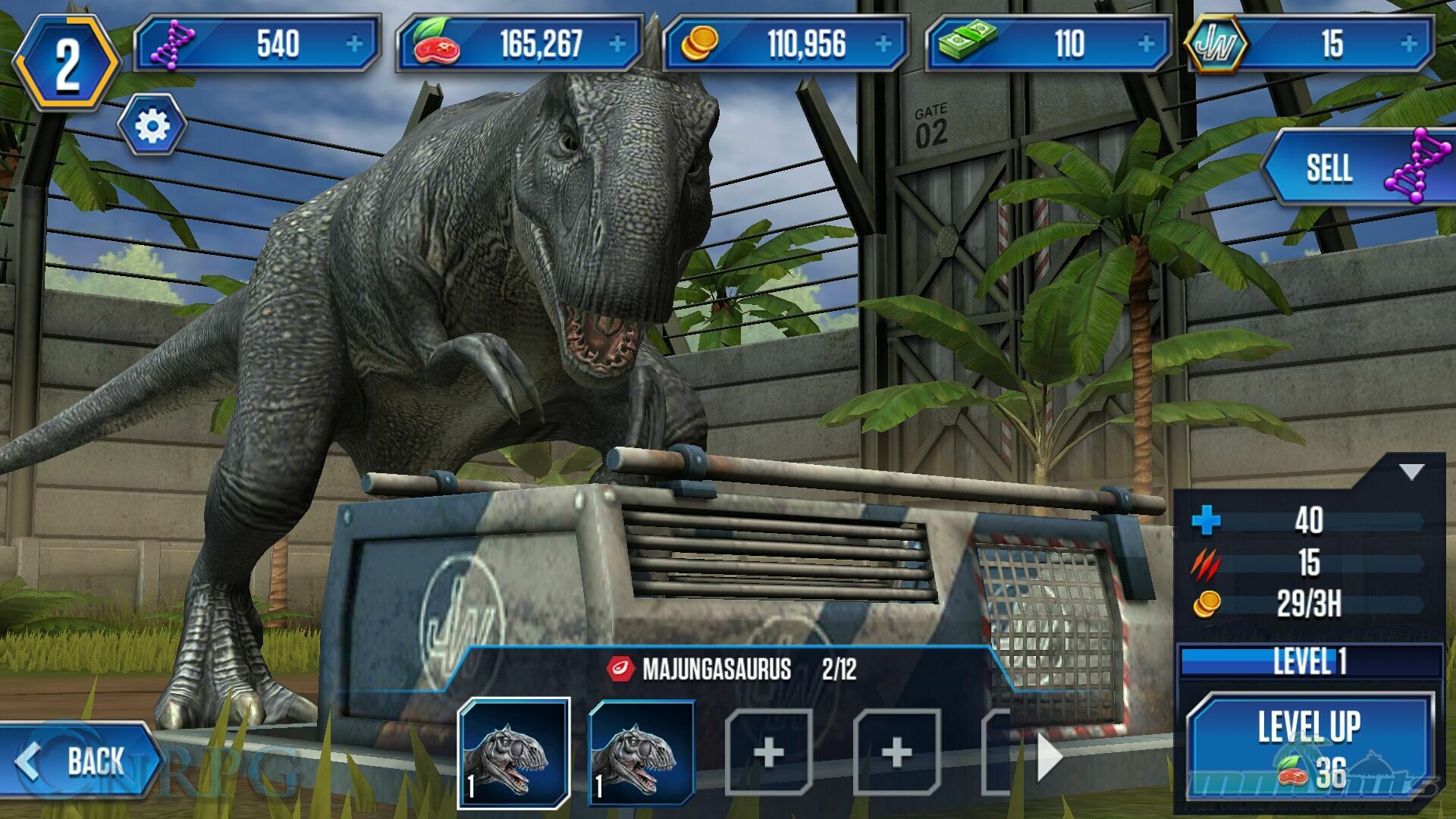 The close-up animations are spectacular for a mobile game.

Since I’ve already tackled the game’s pack system, I will move on to focus on the dinosaurs that you can get in game. The roster mostly includes the dinos you’ve seen in the Jurassic World movie, but there are some who make a comeback from the first ever Jurassic Park movie. It’s nice that the game also reminds you of this once in awhile, such as through the achievement titles that reference the older films.

While the game still retains the nostalgic feel of seeing JP dinos, I love how these and the current pool of dinos in-game adhere to the upgraded looks they have in the Jurassic World movie. And I love that the visual quality of the rendered dinos are consistent regardless of the screen you have them on.

Each dinosaur that you put in their habitat has a level that you can increase by feeding them food. Not only are their stats increase per level up, they will also have a higher gold output as you increase their level. You can house around 12 dinosaurs of the same species in one pen. This allows you a bit more leeway in the late game playthrough as you’ll be unlocking more of the same variety of dinosaurs later on. You would need to house dinosaurs of the same species though because if you want to get them to higher levels, you would need to use the same dinosaur species (at it’s current max level) to evolve the target dinosaur to the next stage.

The game gives you two options whenever you get similar copies of the same dinosaur from packs. You can either house them in the dino pen which can increase gold output, or break them down into DNA bits that you can use to unlock more dinosaurs in the game.

The dinosaurs also have a rarity system in place which is already a given since you open packs to get them. The higher starred dinos would require longer incubation period to hatch, and have a better set of stats which I will explain why it’s important later on. 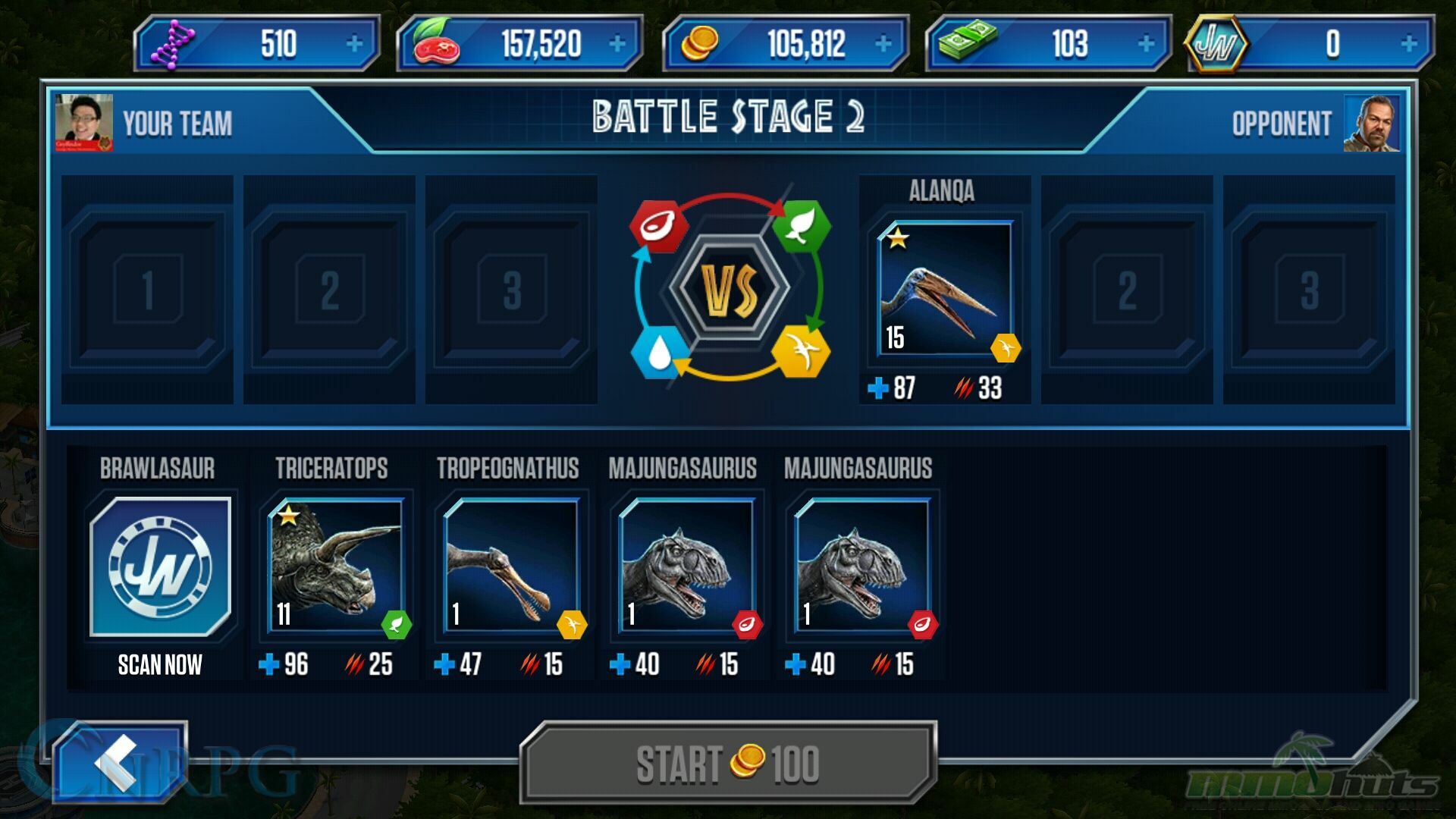 Now that I’ve mentioned dinosaur levels, it’s more than obvious I’m leading to this game’s battle feature. Yes, Jurassic World: The Game allows you to use your dinosaurs in battles, similar to how Pokemon trainers throw down. While this seems weird for Jurassic World, if you recall in the movie, the raptors being trained by Chris Pratt’s character, Owen, were to be weapons by the company who hired him. So the game kind of segues into this gameplay feature in light with that.

Battling dinosaurs in Jurassic World: The Game is more of a turn-based battle system. The game uses a rock-paper-scissor style of weakness/strengths system based on classifications like Predators, Herbivores, Water, and Air. You have three options to choose from when deciding an action on your turn. You can either charge, block or attack. Depending on the opponent’s strategy as well, you can either one hit KO the opposing dino or power through the attack to allow a switch and bring your harder hitting monsters with a lot of attack options.

The game’s battle system is simple and easy to get into. As you’ll be battling more in the mid-late playthrough because the game’s simulation feature seems to be created as merely an add-on to the game’s “main” feature which is battling these dinosaurs out for sport. 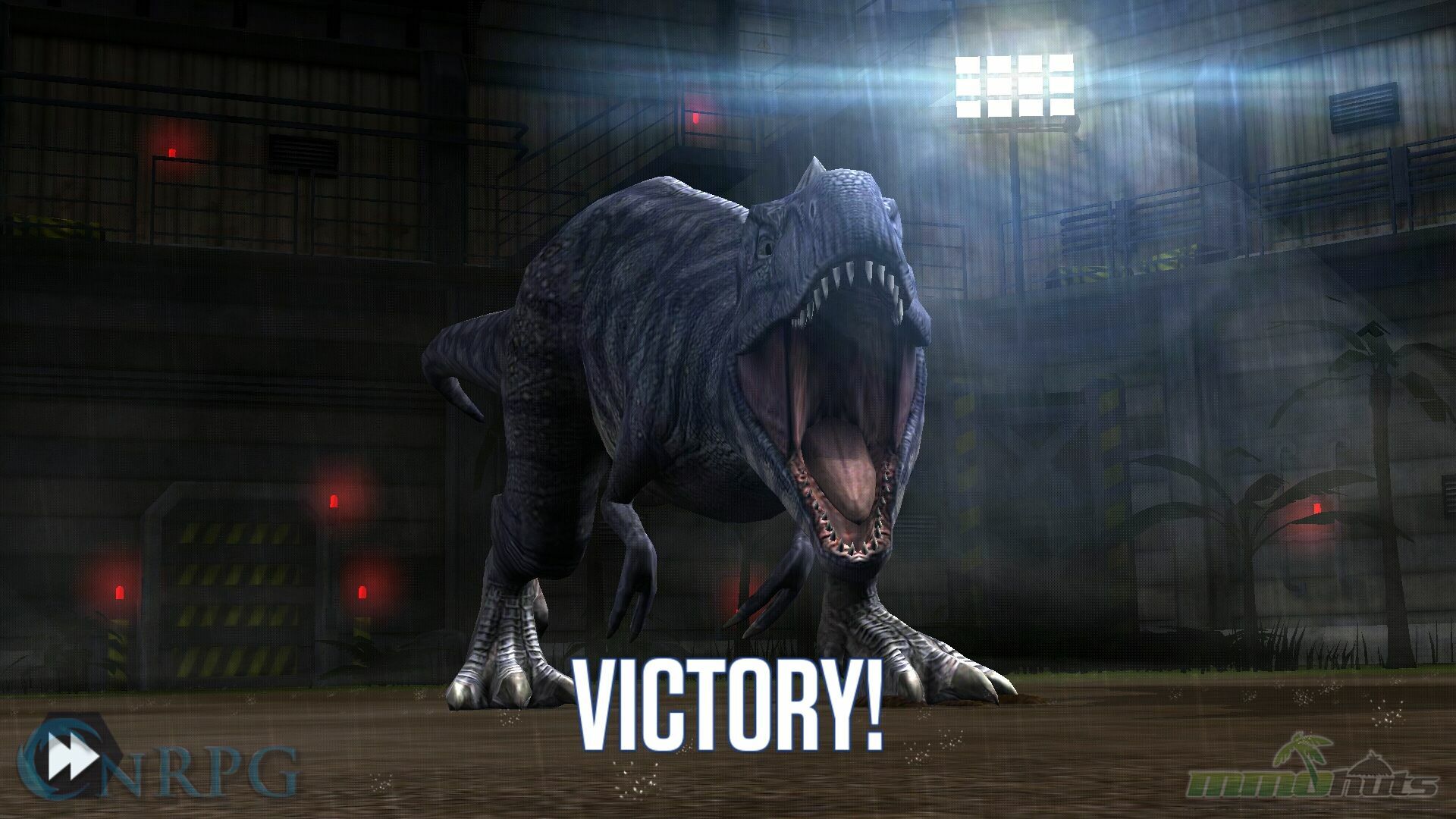 Jurassic World: The Game is a surprising title that I never thought I’d get so caught up in. While on the surface it seems like just another simulation unit gathering title for the mobile, it’s a bit more substantial than that. I liked that the game kind of swerved with the simulation-strategy gameplay and added the battle system. While I personally didn’t like that you’d have to use the dinosaurs you’ve created to battle, the battles get a bit engrossing as you continue on participating on them in both AI and player controlled battles.

Overall, Jurassic World: The Game is one of those titles that take a movie IP and actually run with it with a plan and decent supporting features.