News >
News & Update Articles >
Save the City in Trove – Heroes

Save the City in Trove – Heroes 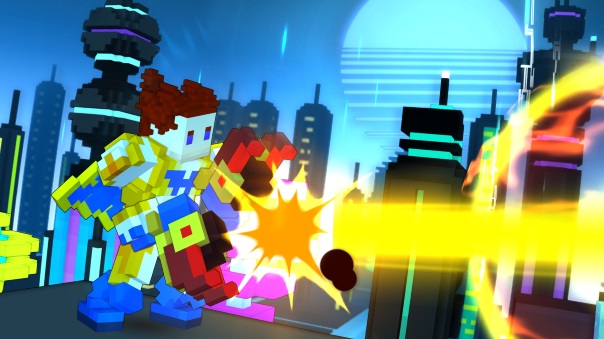 I love superhero themed content, and it’s time for one of my favorite games to get in on the act. Trion Worlds is excited to reveal the next free expansion for the voxel MMO, Trove: Heroes! Coming in Spring 2018, this update allows all Trovians to live out their comic hero fantasies in a new cityscape (Luminopolis) and with a fun new class! Trove – Heroes focuses on the neon-lit city of Luminopolis, a high-tech skyscraper-laden secretion of Neon City. All new adventures await, new NPCs, battles against the gigantic Mega World Bosses that are invading Luminopolis, and save the innocent from the threat of the Amperion. A new Expert Class is also on the way: The Vanguardian! A heroic class that pulls inspiration from the classic silver age of comic heroes, the Vanguardian is a paragon of virtue and strength. Utilizing fluid combat in up close and personal melee skirmishes and from afar via effective ranged attacks, the Vanguardian is well-equipped to take up the cause of the Resistors and turn back the Amperion once and for all! The “Beacon” system is also coming in Heroes. Shine a bright light into the sky to attract heroes to their challenges, these beacons will test the mettle of the strongest Trovians, summoning enormous enemies to battle, and a great opportunity to gather loot! As more news about this update/expansion comes, we’ll have it right here for you, so stay tuned! Same MMO time, Same MMO channel!