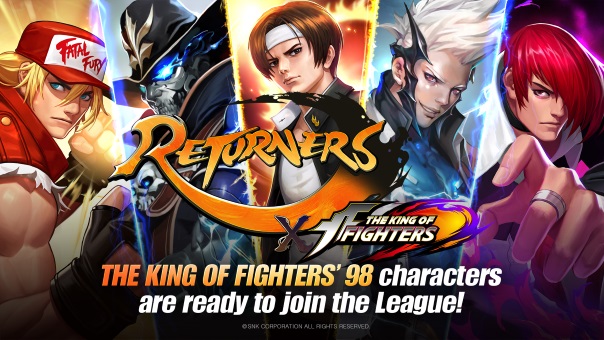 Nexon Korea is proud to team up with SNK Corporation to bring fan-favorite King of Fighters characters to life in their latest Returners content update. With this comes five ‘King of FIghters ’98’ characters – Kyo Kusanagi, Terry Bogard, Iori Yagami, Mai Shiranui, and Athena Asamiya. Each character will have their typical skills from the original game, and this collaboration will last from today (September 6th) until October 5th. Commemorating the collaboration with ‘THE KING OF FIGHTERS’ 98’, Nexon will open an Event Shop for 15 days, in which points obtained in Adventure and Special Dungeon will be tradable for the character, KYO KUSANAGI, as well as other in-game goods. By clearing the Challenge Dungeon, where the collaboration characters appear as bosses, users will gain extra Energy, Gold, and Rare Scrolls, among other rewards.