Editor’s Note: I have not beat SMITE RPG – Nightmare Mode yet. But I did check out and study the stream of Daytoremeber, who was the world first. So that’s what I’m using to see what the most viable strats are for the run. This is just designed to help people get a good idea of what to expect in Nightmare. Please have all the items, and I cannot imagine doing it without buffs. So farm some Rubies in Hard Mode if you need! – Jason

Okay, so I’m a little bummed I wasn’t the world first, but I didn’t go to PTS or anything, so that’s on me. I also didn’t farm enough gold, so that’s another strike against me. But rest assured, I will beat Nightmare Mode, and after studying this stream, I think I can do it! Their team comp (Anhur, Cern, Aphro) is probably not the only Hunter/Healer comp you can go with, but I see why. It’s a strong setup, and congrats to Divios, Daytoremeber and Sam4Soccer2 for getting there first. As of this writing, only three teams have made it to the end, but I hope this will help the rest of us get there. When Hirez said that it was borderline impossible (or it was impossible) they sure weren’t kidding! Groups of randoms will not survive without the utmost communication. Bring only the most confident and stalwart friends to Nightmare Mode. So let’s get started! 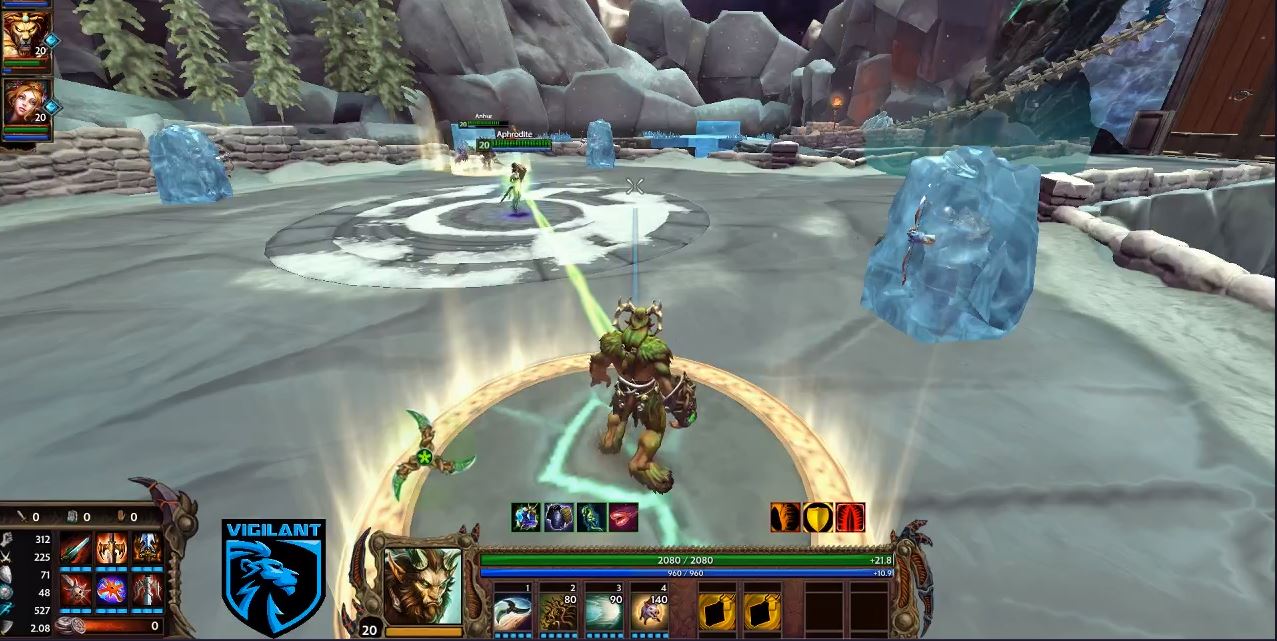 Communication is of the utmost importance in Nightmare Mode.

Niflheim seems to go a little faster but is way more challenging. The packs hit harder, there are more Spiders, everything, I cannot stress enough, hits like a bus full of gazelles. Do bring Hunter/Hunter/Healer or Hunter/Warrior/Healer. Those seem to be the most efficient, in my opinion. Everything is basically the same until you get to the first major checkpoint: The twin-bridges. Now there are four Corrupted Archers (elite) trapped in ice, as well as two runes on the ground. The bridges only appear when you stand on the runes.  The bombs spawn way faster now though, because you need them. What they did was leave just one of the Archers alive in the ice, and have the healer run the bomb, while Cern/Anhur fought the enemies. The waves spawn constantly now. The important thing is, when the final encounter arrives, those Corrupted Archers break free, and if all four are there, you will wipe. That’s just what happens. So with two lifesteal Hunters, it’s a bit more manageable. Be aware that the Harpy Matron and Spirit Wolves can knock you off way easier and if things go wrong, they can knock you off the rune while your healer’s on a bridge! Communication is so important here though, knowing when to be on the runes and when not to be.  They rotate between chains, which is probably the most efficient. Destroy the “boss pack” with raw damage and move on.

Slip-and-slide room is mostly the same, except it has those annoying giant warriors on the lone island, the one that brings the giant ice spikes.  Pull one pack at a time, don’t try to grab everyone at once. That’s a really bad idea on Nightmare. Anhur’s pillar is a great slow/kiting mechanic, don’t be afraid to use it.  The final room before Draugr, you know, the one where it’s safe to run through on Normal/Hard? Don’t. Don’t. Stand behind the ice block and line-of-sight them to you. It is a giant wave of bad, and you’ll die if you confront it head-on. They flank and surround you, so be on your guard. Don’t let arrogance blind you. Let them come to you, kill them, and move on to Draugr.  Phase one seems to be the same: Stand on the things, deal lots of damage. Fingers are phase 2, waves come faster, and I see wind. There are circles on the ground but I could not tell what they were for. They weren’t used except by Aphro. The Whirlpool is much bigger and pulls them in, so you have to run away. Phase 3 is the same as well, but it seems like the wind jerks you around and the damage is significantly higher. 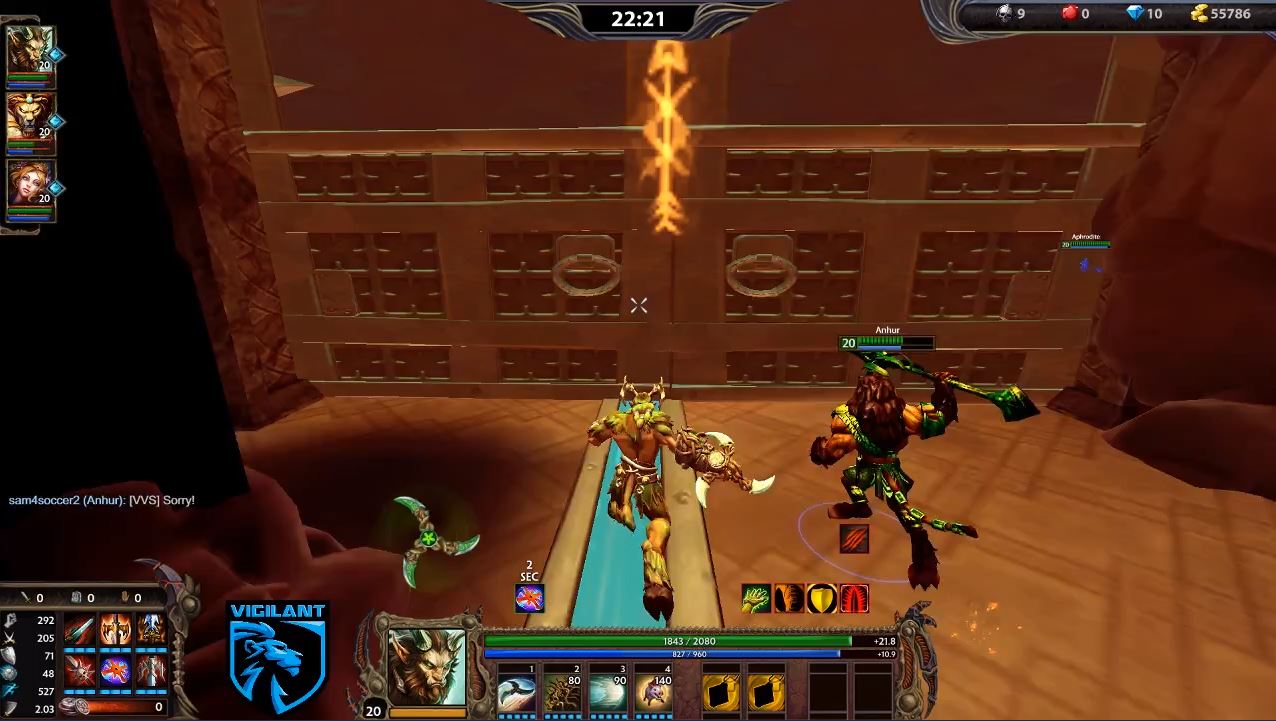 Keep the healer back to call to move to the right rune.

Doug is still there, not fighting you. At first, the packs feel the same and they kite the packs of Nenes pre-bridge backward because they hit very hard. Fatalis is so important here. If you don’t have it I feel like you’ll die. The packs are the same, just with tons more damage. Boars are still there, and they still suck. Skip all those extra packs though. Go right or left, kite the packs, and get the orbs. Ignore all the other stuff. At this point, you shouldn’t need them. Especially you’ll want to kite the Sinister Sisters because they still will pound your ass like a nail. Then there’s the gauntlet of doors, kite them and rinse/repeat. With buffs, the packs aren’t really that dangerous if you’re paying attention. Tormenter still goes down fast, and I think they got pretty lucky on their enemy packs. I imagine there’s a bit of deviation there. In the Boiler Room, there are extra doors, with runes on them. The first one that popped for them was “Axe”, then “Arrow”. then that final “Triangle”.  The dam is hidden behind all these doors. The healer stayed behind to watch while the two hunters went through. It looks like they step on the room they want to open, go through the doors, break the dam then get back in time. The doors don’t open until the healer in the back steps on the runes. So you have to call out which rune you need to be moved. It’s way more complicated. Do it all three times, and you can move on. Then we have Surtr. He does hit harder.  Unfortunately, they glitched him somehow, so I can’t figure out what his strat is. I think they burned through a phase too fast or something. They talked about killing a thing in three hits, so maybe he has a projectile/add. 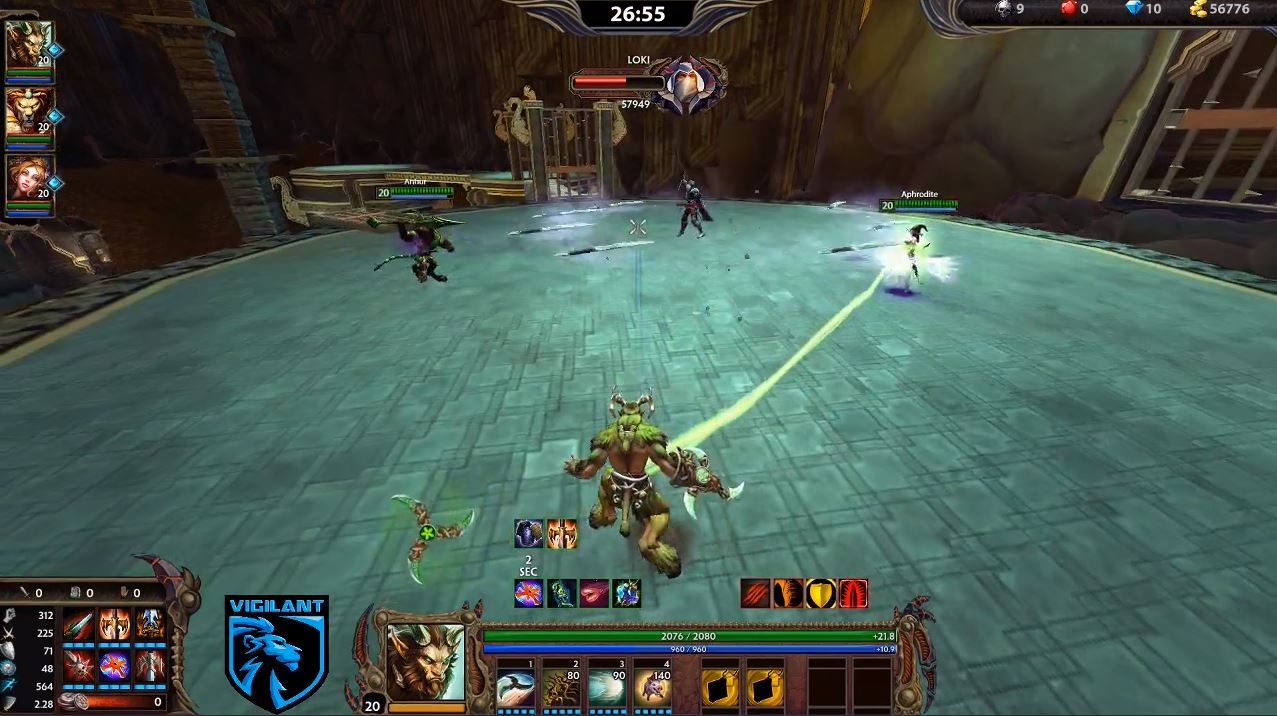 Little disappointed in ya, Loki.

So now we’re in Helheim. Skip the extraneous packs, of course, but be aware of the Jailer. He hits harder and you still won’t come back if he gets you. Then there are two boars to be worried about, and a huge pack of archers. Kill the Archers before the warriors, to prevent a quick death. There’s a powerful Cyclopean Warlord+Archer pack after that but you can kite them around a corner. The damage is about the same as hard mode they were saying. It looks like they just made Niflheim way harder. When you break open the next set of gates, their damage ramps up. These packs are still quite dangerous. They pillared the Bull Demon King in his room and just smashed him. Seems like a really smart idea. However, the Nemean Lion hits like a bus! (600~)Use your mobility skills to avoid those hits! Also, I recommend Anhur for kiting around his pillar, such a smart idea. Or you can kite him to the door and just laugh. Ignore that last pack and just run to Loki. It seems the same at first, just he’s a bit tankier. The damage doesn’t seem higher. The same saws/knives, so nothing new. My conclusion is the only real serious threat is Niflheim and the communication needed for the Boiler Room. It seems to even out after that. Niflheim is clearly the hardest part. If you want to watch their stream to see the strats used for yourself, please click the link below and consider following Daytoremeber’s stream. Without him, this would not be possible. Now I know what I need to do to complete the Nightmare Mode, and now so do you (except Surtr)!