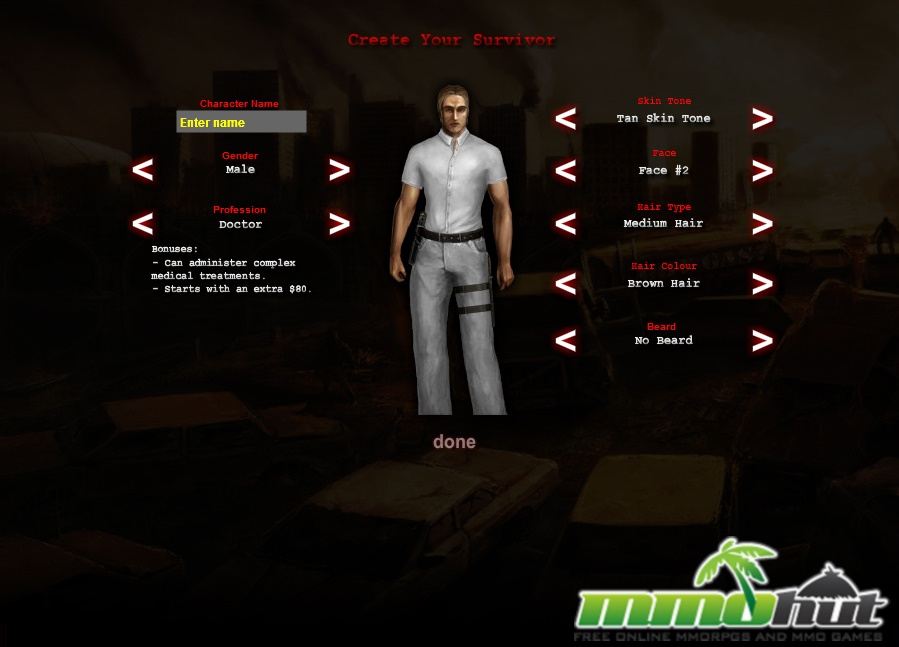 It was a dark and rainy night, and all the traveler was protected by was a single flashlight and a handgun – but would that save them from the zombies that lurked on every street? When it comes to horror MMOs, the selection remains incredibly slim. Survival horror games are incredibly popular outside of the online gaming genre, but have yet to break through. Dead Frontier, published by Creaky Corpse Games, seeks to bring zombies to the browser-based gaming level, as well as offering a free-to-play online experience.

Character creation in Dead Frontier begins with choosing a gender and skintone, hair style, and facial expression, as well as a job. Customizing a character’s looks is relatively simple, and there’s often not a lot of difference between character appearances. Appearances are also almost indistinguishable in-game, either in the normal or 3D modes.

Professions, however, are another matter. There are twenty total professions (classes) for players to choose from at the start of the game, and will determine their starting stats and boosts, if any. There are two professions (farmer and scientist) which can create goods once per day automatically that can be sold on the market; three professions that can sell their services on the market (doctor, chef, and engineer), and the remaining professions offer a variety of stat boosts, including several classes that offer a boost to experience gain. Because stat and skill allocation is assigned by the player each level, these classes aren’t strict in what you can or can’t do in game – but each offers its own pros and cons to surviving in Dead Frontier, and some of the best bonuses come at a heavy cost. 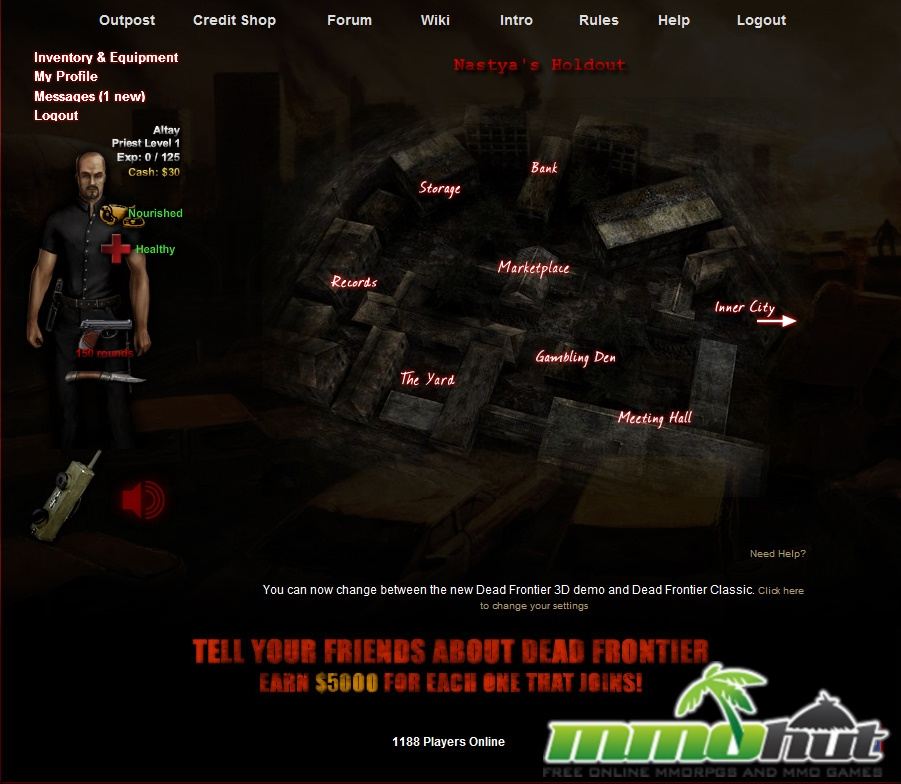 The first thing that a newbie is advised to do is head straight to the streets of the Inner City and kill their first zombies, as well as look for loot. Accessed via the Outpost map, there are two versions of the Inner City: 2D and 3D. While the Inner City is technically the same, there are some key differences. The 2D client allows single player or multiplayer modes, and multiplayer modes are created through a lobby system; the 3D client, however (which is currently still in testing) is a persistent, multiplayer world that players enter and exit at any time.

Once on the map, players can explore by using WASD for movement, the mouse to aim and shoot, and other keys to access functions like the inventory and map. The game screen is very minimalistic, as is your goal: kill zombies, and find loot. Zombies can be found anywhere, and often produce a warning moan sound when they’re nearby. Loot, however, must be found by stopping to search the bodies of zombie victims and other remnants of civilization. There’s no guarantee you’ll find something at a search spot, although the farther away, the better your chances of finding loot – and of getting quality loot.

Gearing Up In an Open Market

There are three things that must be maintained while exploring the Inner City – hunger, health, and ammo. Hunger is lost gradually over time, and may be filled by eating food (created by using farmer’s products with a cook’s skills). Health is lost when hurt by zombies, and may be restored by applying medicine – a player can do this themselves, or do it to greater effect with the services of a doctor. Ammo can only be found in the Inner City by looting, and so can be considered rare and hard to come by for a new player.

Dead Frontier has a unique market, in that it is completely player-driven and open. There are no NPC shops, so everything on the market – from goods to services – must be found by players through looting, or created by them, and then sold on the market. Since players set the price of goods – based on demand and rarity – it can be difficult to get supplies early on. Players must be careful with their money, including being wise on what to sell and what to keep, in order to get a foothold. 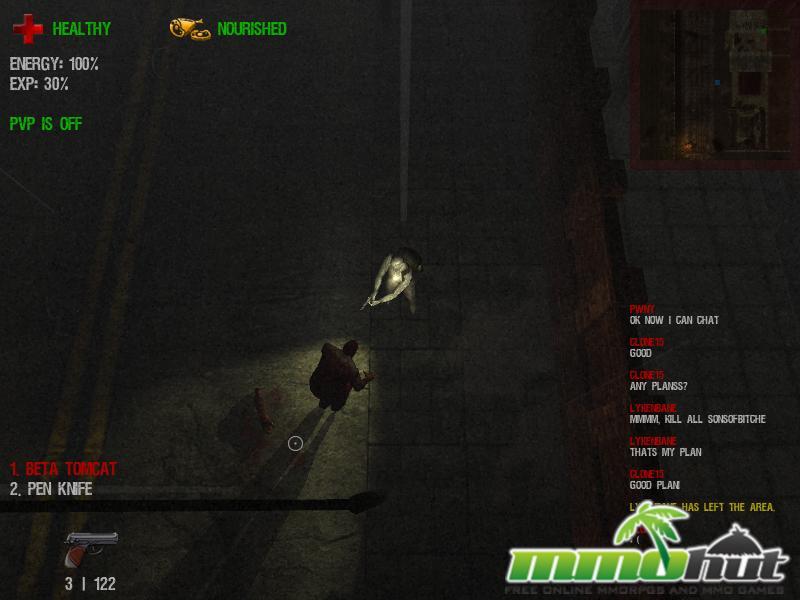 The Dangers of Jay Walking

Back on the streets of the Inner City – whether in 2D or 3D – there’s not a great deal to be done outside of killing zombies and looting. The 2D maps offer the chance to pick up random missions, from delivery missions to extermination missions of varying degrees. In either game’s multiplayer mode, players can enable PvP, making the streets even more deadly in a free-for-all for survival.

That’s not to say that looting and killing zombies can’t be fun, however. The streets are dark, and only a single flashlight offers you enough lighting as you stalk around the streets, so it’s easy for a zombie to sneak up on you. Fighting zombies can also prove challenging. The more noise you make – whether it’s running or using loud weapons like shotguns or chainsaws – the more zombie attention you’ll attract. Zombies are also more plentiful and more dangerous the further from the Outpost you roam. Survival really is key, and even after hours of playing, it’s hard not to be on edge when on the streets.

Dead Frontier is definitely moving in the right direction as a survival horror game. The atmosphere, music, and environments are perfect, and the very survivalist nature of the game’s market lends to the need to play smartly on the streets. However, the game also has plenty of room to grow, and as it currently stands, offers generally repetitive gameplay. Story, rescue, or scripted missions, other dangerous undead creations that require teamwork to kill, and alternate ways to return to the outpost other than a long trek back on foot would go a long way to add to the game’s depth. For now, Dead Frontier is great to play in spurts when you have a craving for zombie killing.