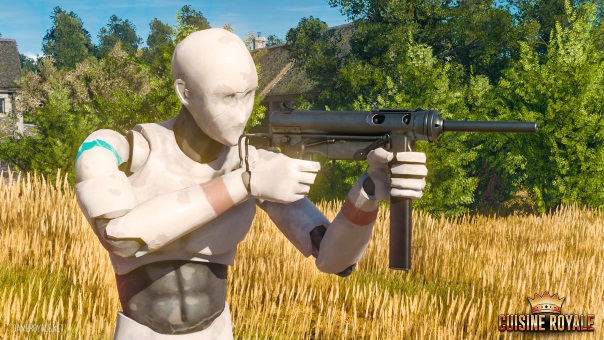 “Having to search for only weapons and armor is so 2018.”

Cuisine Royale is pushing the boundaries of the Battle Royale genre yet again with today’s update. Not only are players searching for weapons and armor, but body parts to put them on! Players will need to keep an eye out for arms, legs, and other parts, after you’ve found a head, anyway. But there’s no need to worry, as you won’t start out being anything more than a torso (in fact, you lack that, too). The mannequin you are joining the battle with does have some human resemblance, but you won’t be able to make the most out of the items you find before constructing yourself in true Frankensteinian manner. Without a proper head, for example, you won’t be able to eat, giving you no chance to replenish lost health. And while your weak mannequin hands may be able to hold a light weapon, you won’t be able to haul yourself over walls and obstacles without a proper set of biceps.

The more body parts that you have, the better your character will be. These allow for basic life functions, and having the body parts of the two main characters will add bonus characteristics. Clyde’s iron backside will increase your protection from zero to hero, while his thick head will help to better resist the dangerous effects of the zone, which means you’ll take less damage when out of the playable area. Annie, on the other side, provides your character with an experienced diver’s torso, allowing you to save your breath for longer, while her left and right arm will speed up the reload of your weapons and reduce firearm recoil respectively. You can find a total of 14 different body parts – 7 male and female each – which can be combined in any way you can imagine (or would rather prefer not to).

This event will last from April 1st until April 5th.