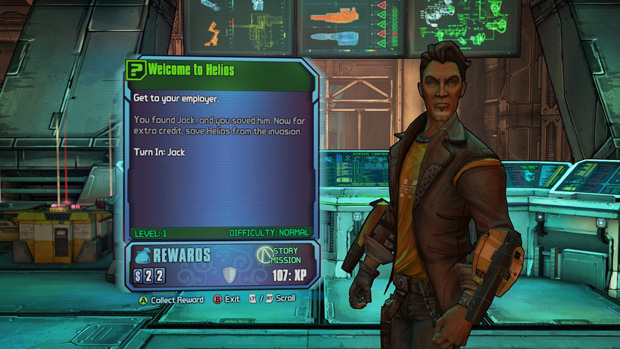 By now, pretty much everyone on Steam and Console alike is at least familiar with Borderlands, an outrageous futuristic shooter where you play one of the powerful “Vault Hunters.” Essentially you are a treasure hunter, out seeking your fame and fortune as everything on the planet tries to kill you. Borderlands 2 extends this trouble off planet as Handsome Jack, high above, attempts to do you in as well. It is hard to imagine Handsome Jack as a villain (or maybe that’s just me); I view him more like Lex Luthor, someone who desperately wanted to be the hero but somehow did not quite make it. And now we come to the Pre-Sequel, which chronicles the events that led up to Borderlands 2. A great deal of backstory of the major cast is littered across the title, from Vault Hunters to Jack himself. Borderlands: the Pre-Sequel is chaos – exciting, explosive chaos! 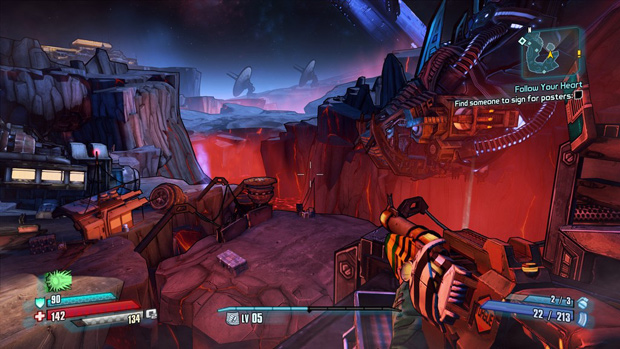 A lot of the game will feel like just another Borderlands title, with similar combat, content, guns, et cetera. Granted, this game uses the exact same engine as Borderlands 2; I will also grant that there are still a pile of bugs with the title, such as the duplication glitch that as of this moment I do not think has been fixed. However the news is not all negative. The franchise maintains its sense of clever in-jokes and pop-culture references to make just about anyone split their sides laughing. There are some that say that this is really just overpriced DLC, but that argument has been overdone for just about any series that ever dared expand their lore into a sequel/prequel. I still feel that it is a terrific title that will likely explain many events in the first two games, and help set us up for another game in this ribald, crude series.

Up to four people can play this title together, and I can only say that despite the majority of my play so far being solo, more is definitely merrier. Badass Tokens are back, as well! Challenges result in points towards these, which give you a variety of permanent effects that still can be used on all characters. The idea of rare spawns and fantastic loot appeal to me as well as I love MMOs, but in this I don’t have to wait hours and hours on other players. Just drag a few people online and go demolish bad guys. 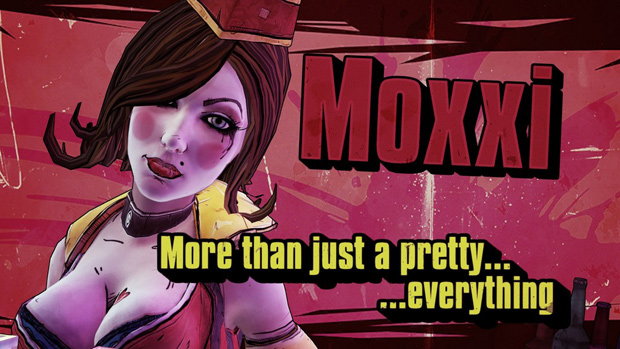 Merrif Really Is A Stupid Name

Borderlands: The Pre-Sequel takes us to the moon of Elpis, right near Pandora. Coming to the fight are four new Vault Hunters, each with their own motivations, abilities, strengths, and weaknesses. The most important of these characters is obviously Claptrap! Claptrap is with the crew on orders of Handsome Jack (who ultimately orders all the Claptrap units destroyed around Borderlands 2) and his unique power is a Malware program called Vaulthunter.EXE. When activated, he randomly summons a power taken from earlier Vault Hunters. It is incredibly chaotic and random, from bouncing rubber duckies, to the FUNZERKER (of Gunzerker fame). Athena the Gladiator uses the “Kinetic Aspis” shield, which she uses to absorb damage. It is thrown with the same action button, much in the way of Captain America. Wilhelm the Engineer can upgrade himself with technology, making him increasingly harder to kill. He’s gruff, grim, and straightforward. Finally, there is Nisha the Lawbringer; she’s very close to Jack, and wields two pistols in an Old West fashion. 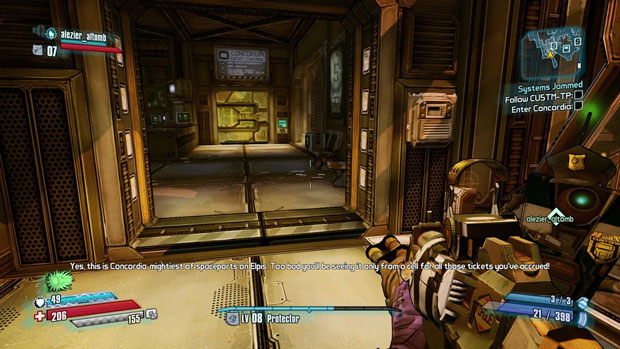 Many of the characters that exist on Pandora are presently on Elpis. Moxxi, for example, runs a bar. She’s also one of the reasons this game is certainly not for children. One of the crude jokes of this game is centered around her and makes a prime example. There’s an exit to Concordia through her bar, and it unlocks an entrance labeled in-game as “Moxxi’s Back Door.” The game is filled with dialogue like this, including a gun that swears at you the entire time you have it equipped. I cannot stress enough that this game is not for kids. However, there are friendly, humorous points in this game that anyone could enjoy, such as nods to the Super Mario Bros., NBA Jam, and one of my favorite movies of all time, Demolition Man. Despite most of this adventure bring brought you with reused art assets, they’re still presented in a gorgeous and well thought out manner. It certainly won’t be a standalone either if the four existing DLCs for Borderlands 2 is any indicator. In this era of gaming, there are a plethora of series that do not deviate much from their course and are wildly successful (see any shooter in the past 15 years). The same can be said for Borderlands. 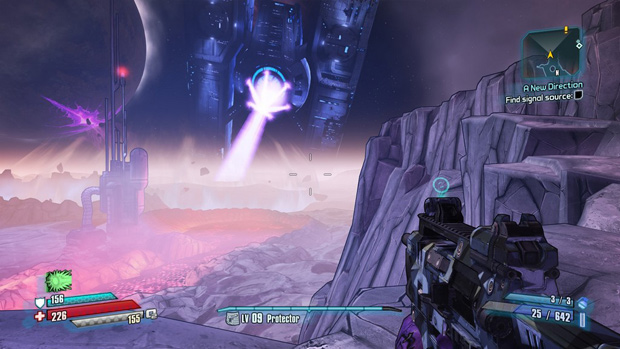 Michael Bay Would Be Proud

There are way more explosions on Elpis than on Pandora. This is because one of the main enemies, Kraggans, explode when they die and create smaller enemies to deal with. The combat system is virtually the same: run-and-gun, grenades, action powers, and barrels filled with toxic crap to blow up. This is standard fare for Borderlands, but there are new additions to look out for. Elpis is a moon, and as such, has no atmosphere. There are gouts in the ground that exhale Oxygen for you to use, which is applied via a new equipment slot, the Oz Kit. Besides that, there are buildings that have their own oxygen system, as well as items that add Oxygen to your character. Another quirk of being on the moon is the reduced gravity. Your jumps are much higher, and you can expend some Oxygen to float farther/jump higher. If you hit a button, you can slam the ground, essentially Mario-style stomping an enemy, or as some people call it: Buttslamming. Buttslamming may not be a high-technical skill but it sure is fun! 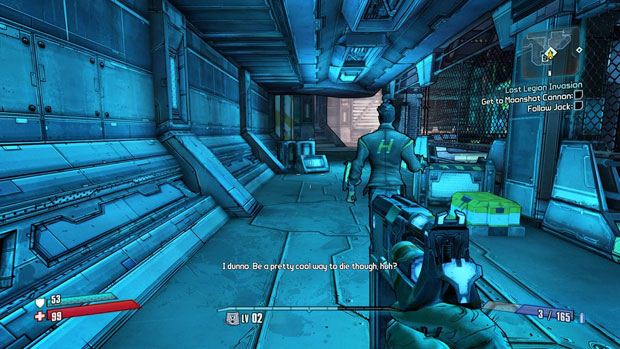 The enemies need O2 as much as you do, for the most part. Some enemies have entire suits to defend them, but many of the humanoid enemies have just a flimsy shield protecting their face. One of the most solid strategies to kill Scavs and other humans easily is to shoot them in the face to break the glass protecting the Oxygen supply. They will begin to choke and take damage rapidly until they die of Oxygen loss unless they’re in an area that supplies the gas for you. Out in the world, it’s easy game. There are new vehicles, lots of new enemies, and bad-asses everywhere. It can be very frustrating to enter a new area, and find two to three badasses killing you repeatedly. Badasses, for those uninitiated, are high-powered enemies, far more difficult than their compatriots. And for those of you who have save data of the earlier Borderlands games, you’ll be rewarded with Golden Keys or other items such as skins for your characters. Golden Keys can be used in Concordia to pick up epic (purple) guns for your characters, provided you have a Shift account, which is free. These keys are given away online frequently, so with a careful eye, you can grab lots of amazing gear for your characters. 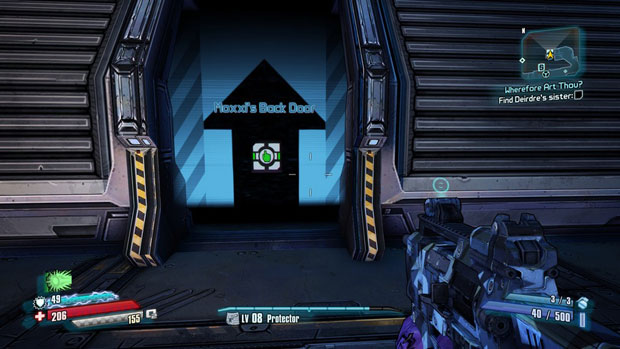 While it is the same ol’ thing again, it’s the same ol’ thing done well. It’s entertaining, immature, violent and insanely chaotic. But there is a deep story going, and characters expand in an interesting fashion. I’m still learning about the game, finding character development, new guns, and new quests. There’s plenty to see and do, and it is of course way more fun with friends. The idea of a pre-sequel is strange I will grant, but I am terribly glad to have spent this time in Space Australia – I mean, Elpis.

This game is beautiful, no question. I would have enjoyed playing it on the PS4, but on the PC, I am far from disappointed. It feels still sort of familiar from Borderlands 2, but the art assets, while some reused, have lots of little touches and tweaks to make the moonscape still draw out your inner explorer. I spent just as much time admiring the scenery as shooting the crap out of everything that was in front of you.

The controls are nice and solid. I still gripe that Steam has no love for the PS4 controller, but the gameplay remains strong despite the fact. The buttons are pretty much the same as always, and they do exactly what you expect. Driving controls still pretty much suck, though. I cannot conveniently count how many times I drove off a cliff, into lava, or to my death in some other comical fashion. Or backed up so far I fell off a cliff and died in a firefight. Other than that? No issues.

The game is pretty straight forward. Do quests, kill bad guys, get money, get loot. There’s plenty of challenge and lots of sidequests and easter eggs to find. You will not run out of stuff to do ten hours into this title, I can assure you of that. While there are plenty of quests and even more running around, there is just about nonstop chaos and combat, plus new content coming post-launch. There aren’t many “features” per se’, but what is available is solid. There are always new ways to play, and letting you store guns from one character to another lets you set the level of difficulty you prefer on follow-up playthroughs.

The emptiness of space feels pretty apparent here. The music is mediocre at best to me, but the dialogue and character interactions really make this game shine. From Moxxi’s slip, Janey Springs’ . . . interesting children’s stories, and the constant wisecracks from Handsome Jack, you will likely not want to mute this game at all. A little more variation in the music would have made me happier, but the sound of explosions, swearing, and violence definitely satisfy the teenager in me. 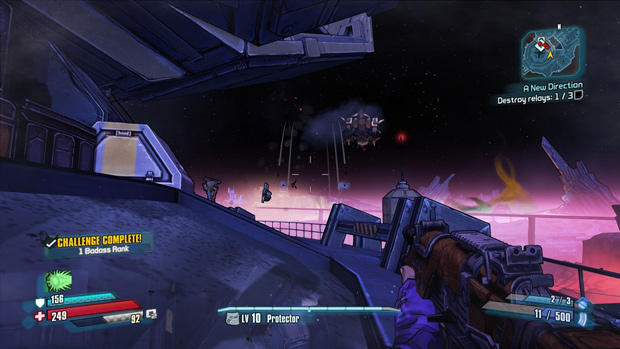 Want to check the game out in action? Check out last week’s launch livestream with JamesBl0nde. (Starts at 1:22:00)