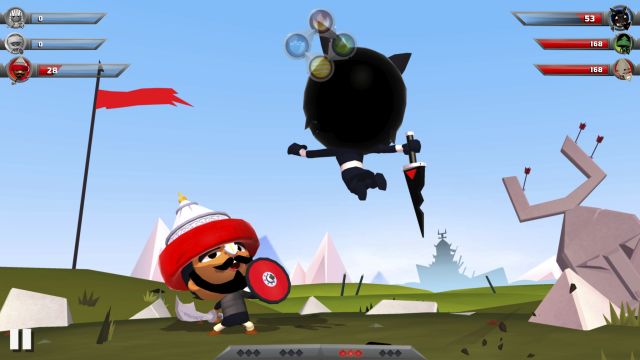 Mind Candy™ today has launched its hit mobile game, World of Warriors™, on Android Devices. World of Warriors is an epic adventure and combat strategy game from the makers of the phenomenally successful Moshi Monsters™ franchise.

Already available on the Apple App Store, World of Warriors is available on Google Play beginning today. The #1 role playing game for iPad in over 80 countries in the App store, and featured globally in ‘Best New Games’ with an average 4.5 star rating, World of Warriors also features in ‘The App Store’s Best of 2014’ list.  Since the game’s debut on the App Store at the top of November, players have entered into more than 87 million fights and collected 10 million Warriors.

An all-new genre and IP for Mind Candy, World of Warriors blends fighting and RPG gameplay in a pick-up-and-play experience built to appeal to console gamers. Featuring an ever-expanding array of the greatest warriors in history, from Ninjas and Aztecs to Knights and Vikings, World of Warriors takes players on an epic journey across the vast Wildlands.

Every warrior comes with their own incredible backstory, special moves and historical facts. Through heart-pounding battle, elemental-based strategy, a rich crafting system and the chance to compete with players across the globe, World of Warriors delivers an unforgettable battle experience in truly stunning environments.

In addition to today’s launch on Android, Mind Candy’s celebrations of the holiday season include the introduction of a horde of new Warriors and Talismans into the game each week beginning today, so players across all platforms can collect and master their jaw-dropping new special moves to extend their strategies. Even more legendary Warriors will be available exclusively by scoring top marks in the Global Leaderboard at the Tower of Trials, including Zazan the Assyrian Warrior, Blain the Gaelic Kern, Manawa the Maori Warrior and Zahra the Scythian Princess. The game will also see the introduction of a limited edition Santa Claus style character, Kringle the Festive Fighter who will become playable for all just before Christmas for a limited time only. All the new updates can be seen in the video trailer, here.

Commenting on the launch, Michael Acton Smith, founder of Mind Candy said, “The response to World of Warriors has been phenomenal so far and we’re very excited that Android users will now be able to enjoy this epic game too.  We’re looking forward to bringing many more new characters and updates to the game very soon!”

World of Warriors is free to download from the Android Google Play Store or at: https://play.google.com/store/apps/details?id=com.mindcandy.warriors