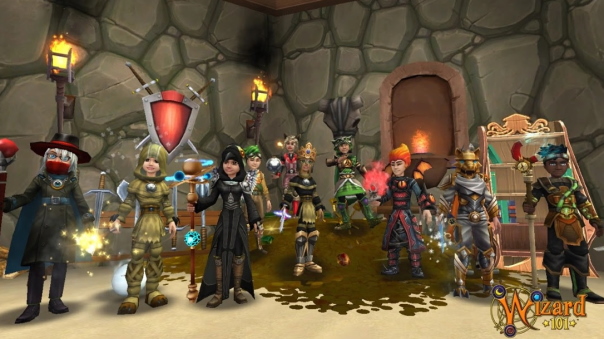 KingsIsle Entertainment and gamigo invite players to gather their friends to create the first ever guilds in Wizard101. Starting today, North America-based Wizards will be able to set up a guild, move into their guild house and prepare that house for the new Raids feature. Raids are an extension of the Guilds system where large groups of guild members overcome objectives to defeat formidable boss mobs and acquire special badges and other prominent rewards along the way.

Players that join a guild will have all the key benefits of identifying and interacting with fellow members, including posting on a guild message board about current events or requesting assistance in progressing through the game. The guild house will have many special features available to guild members, including a shared inventory, PvE and PvP combat practicing opportunities, and of course all the decorating options that Wizards love to use for sprucing up their own player houses.

“Our community has wanted easier ways to meet friends in Wizard101 and we’re now giving them the ultimate in building new friendships with Guilds.” said Artie Rogers, Design Director. “The game has many systems to form lasting bonds with fellow players, but now those friends can become part of a more permanent group than was previously possible.”

Wizard101’s Summer Update also introduces an exciting new round of options for the competitive PvP-based Beastmoon Hunt and PvE-based Beastmoon Monster Mayhem events, new Skeleton Key Bosses to challenge even the most hardened Wizard’s defenses, and new Pet Jewels for your trainable pets that can help your Wizard achieve victory in combat.

KingsIsle will be celebrating Wizard101’s Summer Update as well as its 14th birthday with an unannounced exclusive to press at the upcoming gamescom convention in Cologne, Germany, from August 24-28, 2022.