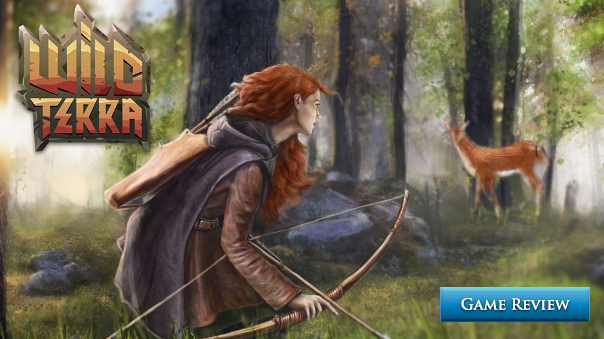 Wild Terra is an isometric 2D Sandbox MMO developed by Juvty Worlds. I’ve covered the project a few times in the past, but it’s fair to say the game has changed quite a bit since my last coverage. To name a few of the major additions to the game: Corrupted Lands have been added as a new adventuring area, mounts are now in the game, the first Siege was held on January 6th. And, of course, the game has officially launched as of December 2017. That’s not to say development on the game has ceased, there’s still plenty of content being added. Wild Terra is essentially a different game since the last time I played, so it’s about time I give it a full review!

Physical customization is basically non-existant in Wild Terra. You have some freedom with your clothes and armor choices, but not enough to even mention it in detail. Customization in terms of stats and skills is a bit more in-depth, but the current system makes you feel too much like a jack of all trades, in my opinion. It gives the impression that Wild Terra should be a PVP-focused game with frequent server resets. And while the tutorial was generally good, it completely failed to help me understand how exactly the stat and skill systems actually worked so I never really focused on them too much until I felt it was really too late to bother. 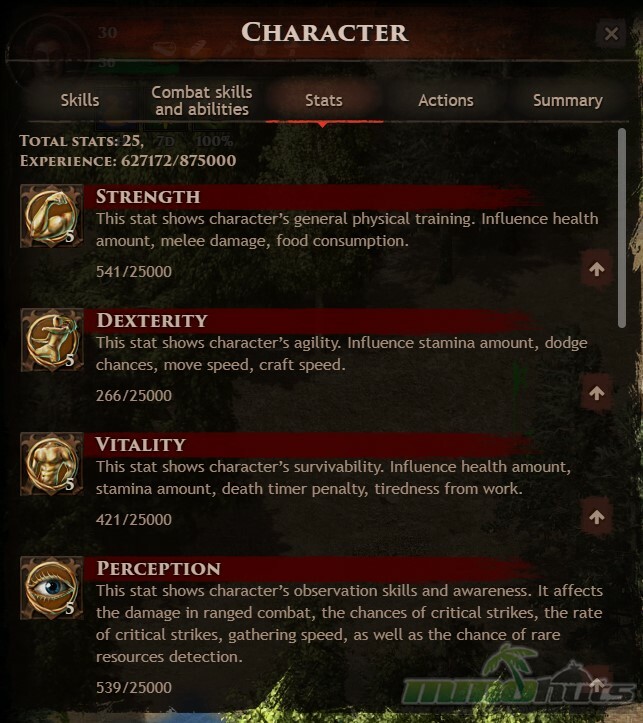 It’s confusing as a new player. Even as someone who plays a lot of skill-based games, it took me a bit to understand how the system worked. Why re-invent the wheel and then make it overly complicated?

Wild Terra offers a nostalgic 2D isometric experience, which is done quite well. The developers went with the traditional realistic style to help bring home the nostalgic and retro feeling, and the artist managed to pull it off quite well. The animations are a bit stiff, but you can’t expect much from 2D. Ranged attack animations were surprisingly good, though. For example, my spears flew through the air and seemed to accurately portray hitting things without doing some Wanted-style mid-air course corrections. In general, I enjoyed the graphics in Wild Terra and didn’t have too many issues with them. 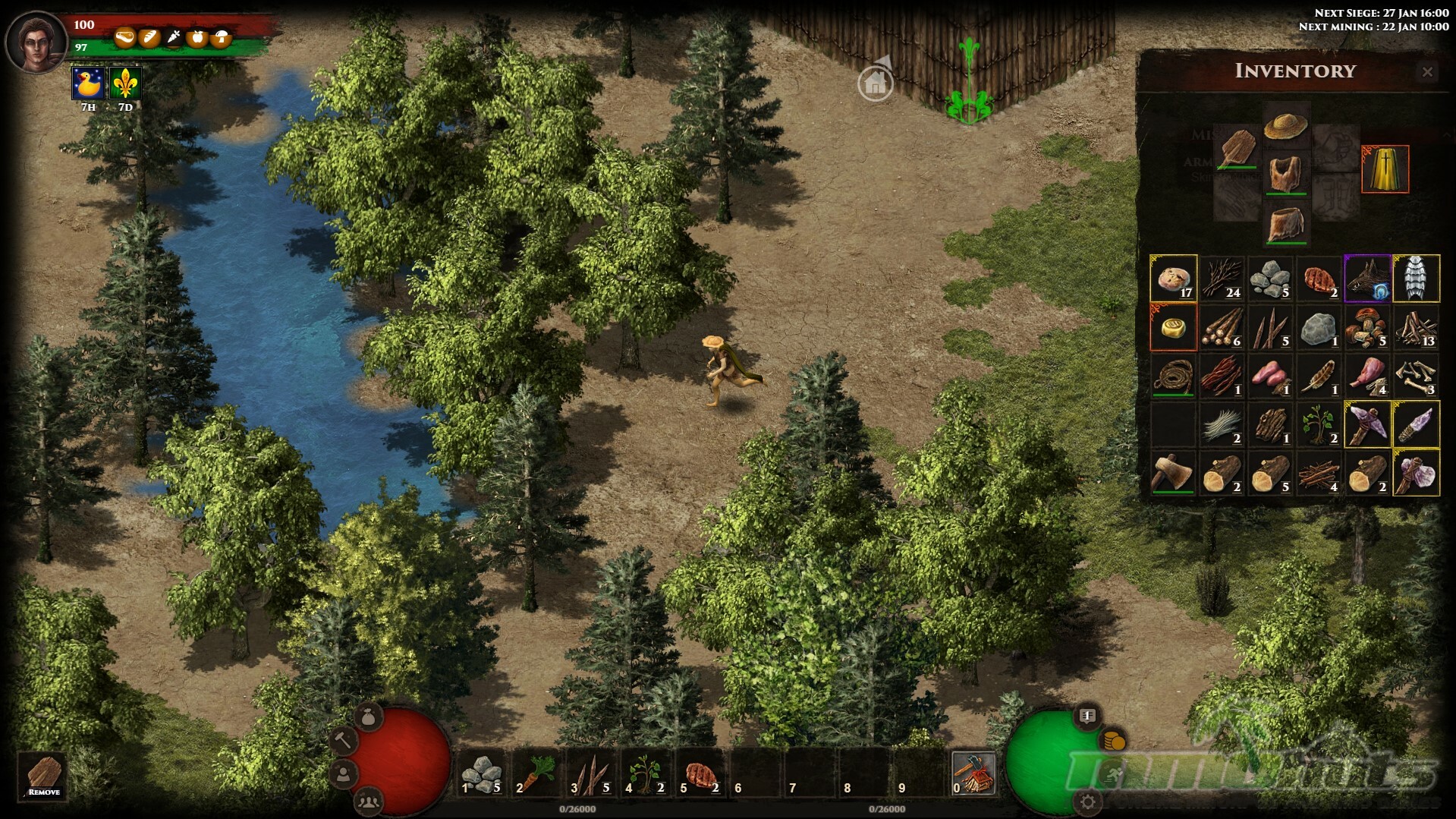 When you first start the game you’re probably going to get a bit frustrated. The game, in a bid to help make things easier, introduces an auto-follow/travel system of sorts. You click on a boulder over yonder and your character will walk to it and even interact with it. Click on a friend, and your character will follow him. However, this can be frustrating in combat when you accidentally click a tree and begin walking towards it, or even while doing basic things like cutting down trees when you get stuck on a campfire. The controls seem to mostly be an issue with ranged combat. Otherwise they work well. And even with the ranged combat, once you get used to it you’re fine.

The community has been seeing decent gains since the release, achieving numbers not seen since the original release on Steam Early Access back in December of 2016. However, while the population is growing, it is still quite small. 229 simultaneous players is the current peak. The population is a decent bunch, with your usual mix of crafting-oriented sandbox players and hardcore PvPers, and a decent amount that fall in-between. It seems like the games primarily English-speaking population isn’t too large, without too much support given to the North American continent. This is, obviously, mainly due to other regions having more players, but reading through the Steam reviews you can see that a few NA players are salty about it. From what I’ve seen, though, the developers have been trying to make NA players more happy. Overall, your standard sandbox community. If you look, you’ll find helpful people you’ll enjoy playing with.

Wild Terra is a sandbox MMO, so there’s an emphasis on both crafting and PVP. Crafting extends to resource gathering and building. Unfortunately, the game doesn’t offer much in the way of being able to change the game world past walling off your guilds city. I’ve been spoiled by titles like Wurm Online and Life is Feudal. That being said, if you enjoy the 2D aesthetic and sandbox mechanics, you will probably enjoy what Wild Terra has to offer.

There seems to have been a fair amount of improvement to combat since the last time I played Wild Terra. I actually had fun, thanks to the tutorial guiding me into it, hunting animals. I didn’t get too much chance for PVP, but looking over the skill trees and watching some videos, it seems like it might be fun. Hunting animals and other NPCs is, at least. It’s rare of a 2D game, especially an isometric 2D game, to capture my interest with its combat, so I was surprised. I just wish the population was larger so I could try it out against players who weren’t completely outgearing me. 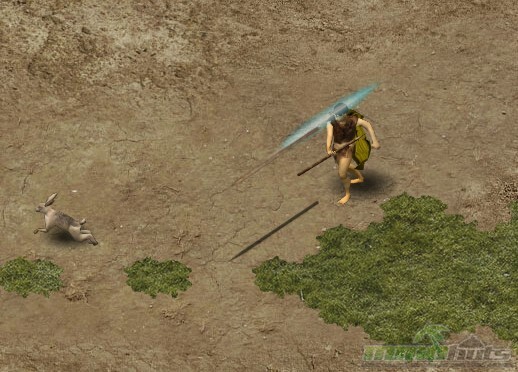 Throwing spears is actually quite fun, and my experience with it in the tutorial lead me to focus on ranged weaponry later down the line.

The crafting and resource gathering systems in Wild Terra are straightforward and typical of the genre. The world is filled with resource nodes – piles of wood to gather, trees to cut, randomly placed ore rocks to mine, and bunnies to chase down and skin. With these materials, you can complete recipes. You’ve given access to a fair amount of basic recipes and as you progress you’ll get access to more. One way to unlock recipes is via the cash shop. Some recipes will require more specialized and harder to obtain resources and may require a specialized workbench instead of just the basic crafting window. It’s a system that works and is proven to be fun, though I feel like there could have been more consistency (such as certain trees growing only in certain regions of the map, or a lot less random ore rocks sprouting out of the ground). 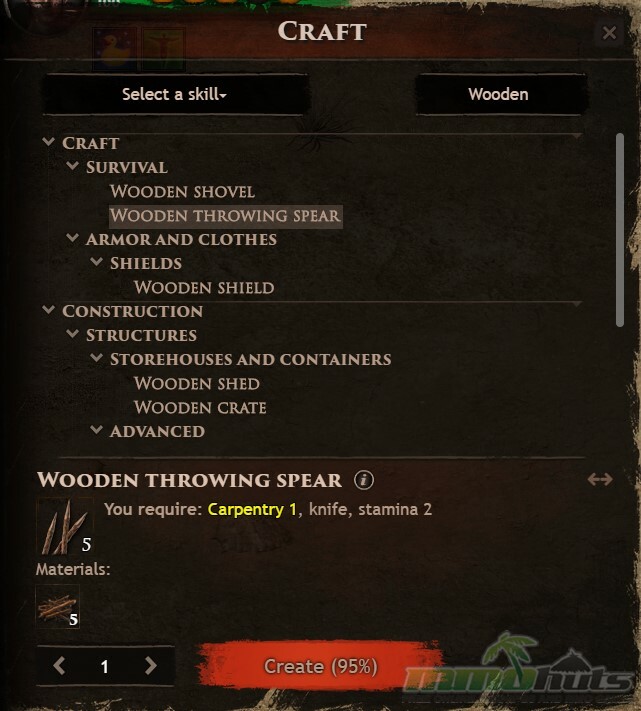 A staple of Wild Terra, and the sandbox genre as a whole, are survival features. In Wild Terra, you’ll need to eat if you want to stay alive. Luckily, the game eases you into this via the tutorial that gives you plenty of food to keep you going as it teaches you how to get your own nutrients. These features are quite apparent early on… sort of. The tutorial makes you transition from being completely helpless to somewhat self-sufficient without too much difficulty. That means by time you get to a point where the game stops making it easy for you to get food, you’ve already got the infrastructure and skill base in place to make food something you barely have to worry about. Some players might like this, but it makes me wonder why the food system is even in place except to act as a minor hindrance and a somewhat generous buffer. The system in Life is Feudal is much more interesting and in-depth, and I feel like Wild Terra would benefit from something similar.

Territory Control comes to Wild Terra is the form of Dominiums. Depending on the server, building a Dominium offers more or less in the way of benefits. On Hardcore servers, they offer a place to spawn and put up walls with a tiny bit more security and not too much else. On casual servers, they give you a place of respite against PVP in which you cannot be attacked by players. The more successful you are, the bigger you’ll want to make your Dominium. Perhaps you’ll get to a point where you decide it would be beneficial to let people come live with you. It can be costly to maintain a large Dominium solo, so it makes sense. 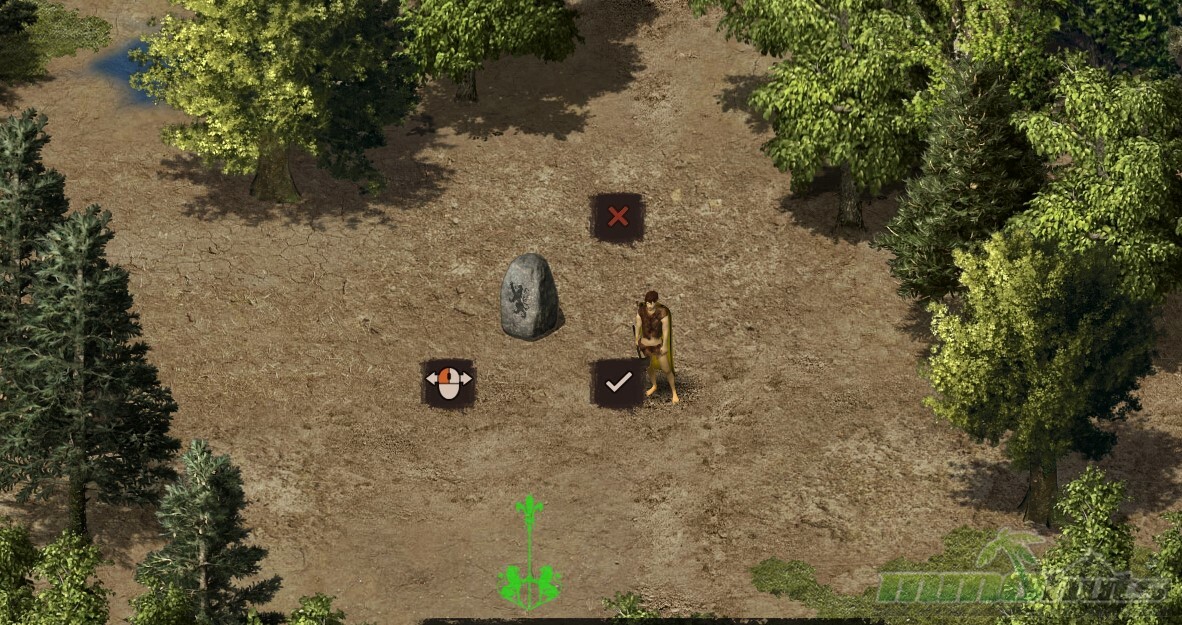 This feature is similar to houses in BDO or Wurm Online, a location to store resources and put specialized workbenches for more advanced crafting, among other things.

Building encompasses a lot and is a major feature of the game. Because you can build yourself a homestead, or get together with a group of like-minded players and create a village or city, the game has a territory control system. There are resources spread across the map, which means there are prime locations that players will fight over. Either through actual combat or by other means (such as trade, or lack there of). Unfortunately, due to the small population combined with multiple servers that spreads out that already small population, I rarely saw other players. The only signs I saw of them in the game world (at least on the NA Hardcore PVP server I played on) were the ruins of their tutorial forts. It gave the game a sad and bleak feel. 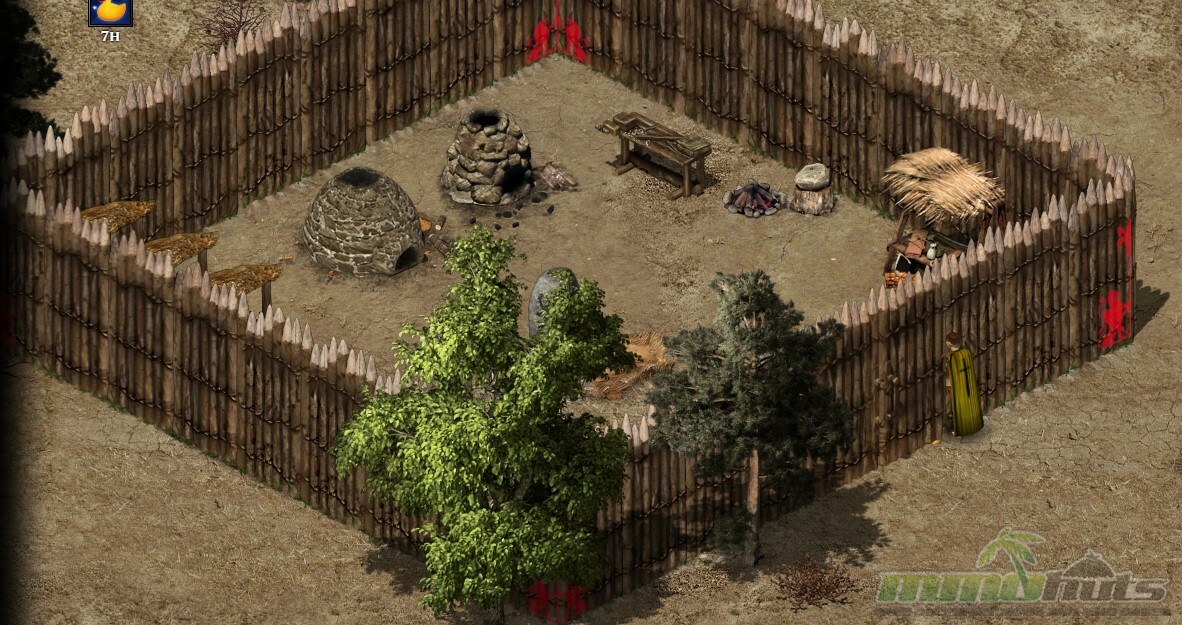 These are spread out across the land and I rarely saw signs of other players that weren’t these structures, all essentially the same, in various levels of destruction and disrepair.

Since my last time playing, there have been some iffy things added to the cash shop. If you read my previous coverage of the game, you’ll know that I listed the cash shop as a “major worry” I had for the future potential of the game. The developers have added their own version of ‘lootboxes’ to the game, something I feel do not belong in an MMO unless they’re purely cosmetic and have absolutely no ability to effect your in-game progression in any capacity. So far, the Wild Terra ‘chests’ aren’t too bad and you can apparently loot the chest (but I’m not sure about the keys to open them) from in-game, but it’s a slippery slope and I’m not sure if the developers can resist the temptation of milking their small and dedicated population for money since they don’t have that large of a player base yet.

On top of that, these lootboxes come in various forms, such as being able to pay 900 gold to unlock 5 random building plans. That’s just one example of many. You can also turn the cash shop gold into an in-game tradeable item, essentially allowing players to turn their real-life cash into something that will buy them in-game stuff from other players. Somewhat like Project Entropia without the ability to cashout. The last game I played that allowed you to buy power like this was Age of Wushu, a game that started out popular and died out as the developers introduced broken pay-to-win mechanics. It’s distressing to see similar cash shop mechanics in Wild Terra.

One of the big benefits of Wild Terra is that development is still in full swing. Updates happen frequently enough that you won’t starve for content (unless you’re an extremely hardcore player). Unfortunately, the population is small and the game has some pay-to-win features that may make or break the game for you. There’s still a ton of potential, though. With other survival sandbox games on the market, such as Life is Feudal, Wurm Online, or even something like Dark and Light, I have trouble suggesting Wild Terra to friends. It’s definitely worth a look, however, as it may be what you’re looking for.

Overall: 3/5 – A solid, but niche, game that could use some improvement.

Want to try out Wild Terra? Grab a key from our giveaway!
Official Site
#WildTerra