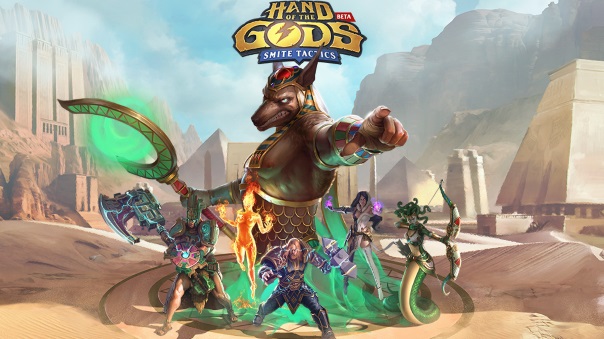 Not sure which Pantheon might be right for you in Hand of the Gods? I have a few thoughts on all the pantheons, some cards of note, and what exactly their deck leader can do each turn.

Ah Puch (Mayan): Zombies, zombies, everywhere, and not a drop to drink. His deck style is very similar to Black Magic in MTG. You rush the field with lots of annoying creatures that you can inflate, and in conjunction with neutral cards like Carrier Behemoth (anytime a friendly dies, the enemy Summoning Stone takes 1 damage), you can force the opponent into a situation where they are stuck taking tons of damage outside of their control. It’s a blend of control and overwhelming force. Their decks to be geared more towards the mid-game, where you suddenly have an unstoppable army. The downside to their force being that Zombies can only move one square at a time. Cards of Note: Shrine of the Dead, Lingering Dead, Death from Above, Raise the Grave, Decay. Deck Ability: Play a 1/1 Zombie on any square for 2 Mana.

Bellona (Roman): Bellona is a terribly aggressive playstyle with (mostly) inexpensive gods, quite a few buffing abilities, as well as her own power to force a unit to move two squares, coupled with Hercules and his power to drag people off your backline, right to their hands. Bellona’s deck is one of the more god-heavy styles, where you will likely play far more gods than you will neutral creatures/non-gods. Many of their cards either deal large amounts of damage (in the 4-6 range), deal damage and spawn a unit, or simply spawn in with another unit. Let’s not forget that for 7 mana they can “Discover” a card that costs 7 or more, and reduce its cost by 7. Sure, it’s a late game card, but it can be a serious game changer in a pinch. Bellona, in my opinion, is a pretty good starter. Her and Zeus, that is. They have a lot of serious power, and answers for a lot of bad situations they are put in. That and I think she’s one of the two strongest decks for Arena (her and Odin).  That said, she starts pretty slow, so make sure to pack some of her low-cost cards to get ready for that mid-game ramp-up. Cards of Note: Terra, Power Delve, Outmaneuvered, Enlist, Venus, Cupid. Deck Ability: Move a unit up to 2 tiles away for 2 Mana.

Ganesha (Hindu): The latest faction added to the game, the Hindu pantheon is even more into a control-format than the other decks. They produce a lot of structures, Pillars, that have some infuriating effects. They were nerfed towards launch: Ganesha’s Pillar of Life now only lasts one turn, instead of being able to flood the board turn after turn. Their pillars can exile creatures, heal them, reduce the amount of damage an opponent deals, or Their deck also heavily uses the Reincarnate ability, that brings a dead friendly unit back to your hand with new abilities and stats. It’s also a deck that’s very good at punishing your opponents if they play too defensively, with cards like Call of Avatar which makes a copy of all of your controlled gods, and gives them Charge (No Summoning Sickness) but they die at the end of turn. You aren’t forced to play control and passive with them, with cards like that. Oh, and Rama. Rama can simply nullify your opponents ability to use their deck power, which can stop most decks in their tracks. Cards of Note: Pillar of Austerity, Pillar of Creation, Kali, Bakasura, Pillar of Patience. Deck Ability: Play a Pillar of Life. It heals a random friendly you control for 1. It dies on your next turn.

Nu Wa (Chinese): The name of the game with Chinese decks is Synergy/Combo/Tempo. You have so many cards that work together, simply for playing a spell. The “Crescent Blade” only deals 1 damage to a unit for 1 mana, but Nu Wa can create these for 2 mana and make them free (for that turn). So you combine that with a Neutral creature (Gladiator) that lowers that cost by 2. Now you create a Crescent Blade every turn that you can play for free. So you deal 1 damage with that: What’s the big deal? If you play that Blade, you can attack an extra time (Ne Zha) or deal 1 damage to all enemy units (Guan Yu). Then you can make them free with Chang’e, change them to Three-Fold Spears that deal 2 damage (Erlang Shen). Oh and you can crank out more Blades every time you summon a unit (Blade Forge). So this deck style is all about combo, and deploying insane amounts of stuff every turn, and hanging back. You don’t really need to move Guan Yu in, since he hits the entire board. Save that for your stronger creatures. Cards of Note: Crescent Blade, Dragon King, Inferno, Xing Tian, Ao Kuang. Deck Ability: Spawn a Crescent Blade into your hand and reduce its cost by 1 for 2 Mana.

Odin (Norse): Do you like doing fast damage out of nowhere that vexes enemies? To play creatures with charge that stops other rushdowns like Ah Puch? Dealing damage that also spawns creatures? Assassinating people like a right bastard with Loki? Then you’ve come to the right place. It’s my personal opinion that Odin is the most easy to pick up deck in the game, moreso than Bellona. It’s also probably the strongest (at least in my opinion) in Arena. They also feature lots of deck draw, “Discovering” (you can find cards that are not in your deck and play them), and can gain extra damage against the Summoning Stone with the Siege ability. Like most factions, there are alternate ways to play, and that’s built around the god Fafnir. If you run Fafnir in your deck, you cannot play cards that cost 5 or more. Doesn’t sound so bad. I mean, you still have Ymir, Thor, Sol and Ratatoskr. But you miss Cursed Dragon, Freya, Loki, Fenrir, Hel. This will completely change deck makeups, but since the majority of their cards are reasonable in the Mana Cost, it really comes down to how you want to play it out. You don’t need Loki (but he IS fun). Swarm the enemy under with Cursed Warriors and Archers. Cards of Note: Siege, Hastened Fatalis, Valhalla’s Blessing, Warrior’s Sigil, Coerce, Freya, Loki, Thor. Deck Ability: Deploy a Cursed Warrior with Charge for 2 Mana.

Ra (Egyptian): The Egyptian deck-type is also one that is very combo-heavy. With his ability to heal a column of units, he can create devastating, but often slow combos. Many of his important cards are built around friendly units being healed, and since he also has a couple of cards that sync up with this, with Meditation healing a 3×3 area, and Pharoah’s Health adding +3 HP to your Summoning Stone (which counts as a heal), Ra locks the field down with crowd control and buffs his units while also healing them, or giving them fun affects like Afterlife. The Afterlife is a very important part of the Egyptian mythos, so expect to see a  lot of gods coming back, or seeing players “Discovering” a card with Afterlife. Egyptian decks don’t really tend to go for the easy, early close-out, and instead are definitely a slower paced, lock-the-board-down around mid-game style. Poisons, AOE heals, AOE damage, low-health creatures are fodder for a Ra deck. Between that, and locking down Warcry abilities with Anhur, or simply destroying an enemy unit with Execute, the Ra style is slow, methodical, but brutal and unforgiving. You really have to play patient, and can’t just spam the field with tons of weak units. Cards of Note: Annihilation, Isis, Canopic Jar, Solar Sanctum, Sacrifice, Ward. Deck Ability: Heal all friendly units in a column for 1 health for 2 Mana.

Zeus (Greek): Zeus’s god-heavy playstyle is very fun. The idea around his deck is to play a host of gods, and punish those who choose to run normal, regular units. He even has a card that deals damage to non-gods with Divine Vengeance. Almost every unit in their pantheon is a god, he can increase his mana output every turn with Heavenly Agility, making it that much easier for his gods to hit the table. He can buff them in outrageous ways, and his own active ability amplifying the already-frustrating strength of his pantheon. One of the most popular ways I’ve seen people win is either by activating The Kraken and changing his ability to summoning the AOE Kraken, or using Apollo. He’s a ranged unit that attacks twice, so by giving him +1 damage every turn, and when it’s time to win, you use Deathbringer to double his attack, and other buffing cards, you create a unit that must be dealt with, otherwise he’s just going to obliterate you in short order. Every god is good in his deck, though some are more costly (Ares, Artemis, etc) than others. Using a Zeus deck typically  means you control the board with powerful units and stunning/killing anything that isn’t also a god/is a weaker god. Definitely a mid-game powerhouse, and pairing gods together and buffing them every turn, you can create quite the hopeless situation. Cards of Note: Hades, Champion’s Bluff, Beacon of Hope, Touch of Midas, Deathbringer, Phantom Grasp. Deck Ability: Give a friendly god +1/+1 for 2 Mana.