Why is Artifact Dying? 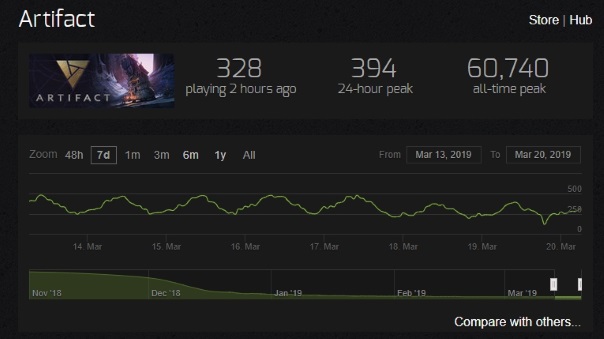 I was watching a video by YongYea the other day that showed Artifact losing 99% of its playerbase, and that Richard Garfield did not survive the recent layoffs, revealed by Game Informer. According to today’s Steam Charts, Artifact’s 24-hour peak is 394 players, with a 30-day peak of 947 players. Compared to the all-time peak of 60.070, that number is paltry. What it seems to me is that once the people who were paid to advertise the game stopped playing it, everyone else did as well. But that can’t be the only reason people stopped playing Artifact. I’ve been playing card games since Garfield’s initial hit arrived, Magic: the Gathering. I’ve played more than my fair share of them, and in this digital era, card games being buy-to-play only is not a smart move. There are simply too many free-to-play options with an “option” to buy with real money, to invest in a card game that requires you to spend real money with that being the only real option. This system Valve has allowed them to receive money twice from their audience – the first being when they spent real money to buy in, and again when they sold cards on the market, receiving a cut of the profit. But is all of that greed really worth it? The Steam Charts point to “no”.

Want To Play Some DOTA?

At the end of the day, Artifact is one on one DOTA. DOTA 2 is still an incredibly popular MOBA. DOTA 2’s 24-hour peak? 916,534 as of this writing. DOTA 2 is the most hardcore MOBA that exists. It has an absolute ton of characters, lots of ways to play them, and mechanics that no other MOBA really tries. It’s incredibly challenging to play, and is, like any other game, prone to incredibly toxic players. But at the end of the day, DOTA 2 is successful and a sound game. You have to ask yourself this question: Do you want to spend 20 dollars just to play DOTA 2 against one person? Not in a free-to-play match with 9 other players, but a one-on-one experience that takes just as much time, and you had to invest money in for the privilege. You don’t have to spend real money to enjoy DOTA 2 in any way, shape or form. You can, but it’s not a must.

Artifact tried a lot of very experimental things for the card game genre, but I don’t really think it’s one that needs to be reinvented. At least not in the direction of using three different “boards” per game. Each board represents one of the lanes in a DOTA map, and you’ll use five heroes, waves of creeps, purchase equipment and more, as you push your way to the enemy players base. At least in Artifact, you can’t run out of cards, because used cards are shuffled back into the deck. When tutorial matches can take 30-40 minutes, and still not teach you everything you need to know for a game, I’ve lost a great deal of interest. It’s important for a card game to be easily accessible, while also having tactical depth for the advanced players. But it needs to feel fun. Artifact feels like a lot of things, but the fun’s not on that list.

Now, I know what a lot of people have said to me for years – “Hearthstone/MTG are pay to win games! You can spend real money on cards!” and yes, that’s 100% true. You can, and probably should spend real money in card games to keep up with the current meta. It sure makes building a collection faster. I do spend money on MTG Arena, and I’m always upfront about it. But the difference between Artifact and MTG Arena is that I didn’t have to buy my way into Arena, and just hope that my starter deck was 1. something I enjoy and 2. even good at all. I didn’t have to spend money on each of my starter decks, I unlocked and earned them. If Artifact had an option to buy in, or options to unlock cards for free, I would have complained a lot less, and I think the audience at large might have at least given it a shot for a longer period of time. The closest way is to win enough Drafts to get your tickets back (3 wins). But if that’s the only option to unlock “free” cards, that’s not really free.

All cards must be purchased individually, or by buying packs. I suppose if there were free tournaments, you could enter those too, but I haven’t seen a whole lot of that going around. 20 dollars is a mighty big ask for a card game when you have to keep spending to get more cards. This was probably one of the largest disappointments concerning Artifact. Another is the paid sponsorships. Now, I’m not begrudging advertising and paying people to sponsor your game is a sound idea. I’m very curious how you try and convince someone to spend 20 bucks minimum on a card game when there are incredible free card games out there already. Eternal, Hearthstone, Magic: the Gathering Arena, the list goes on! Valve does not have so much good karma that people would trust that, not that I’ve seen.

Nothing adds up about Artifact. Sure, I imagine a good deck can probably win in 15-30 minutes, but for people just starting, with nothing useful? I have a feeling those matches could be 45 minutes plus, and when you spend that much time on something and lose? It’s heartbreaking. You spent at least 20 dollars for the privilege of playing this game, and it’s disappointing at every level. I like card games that use lanes, I think that’s interesting. But three whole boards? It doesn’t feel like a project that innovated. It felt like a project that’s the only purpose was to make as much money as possible. Even if everyone stopped playing, Valve got their money. They got their 20 bucks from hundreds of thousands of people. Why is Artifact failing? It’s a pay-to-play CCG. There isn’t even trading that I’ve seen. It’s all about making money. Other card games have their own monetization issues, but the focus is that Artifact tried something wildly greedy, and the majority of their audience saw it. Their business model is greedy, and it shows.

Artifact also had virtually zero communication with their fanbase. They could have, instead of making this a buy-to-play game, made it free-to-play and milked people with cosmetics/card backs instead. They could have easily offered a progression system to keep people playing. Artifact is failing because of Valve’s own decisions and nothing else. It’s not even a terrible concept, but everything around it does not make 1v1 DOTA worth it. All we, as card game enthusiasts can do is hope they learned from this mistake. A better idea probably would have been to follow DOTA 2’s monetization system. Card games can have cosmetics. From foil editions to extra animations, and different designed card art, the possibility is there.