Warframe PS4 and Xbox One Get Update 14.5 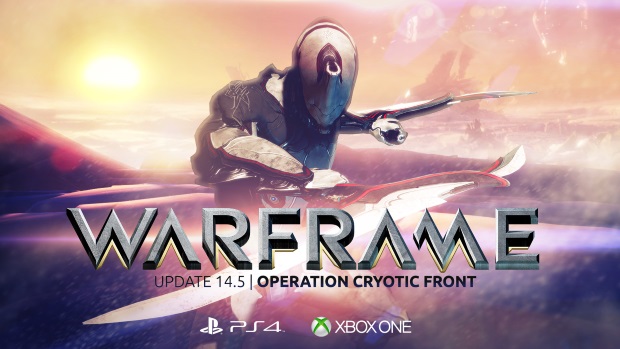 Today, Digital Extremes launches the next content patch for Warframe®, the wildly-popular AAA Free-to-Play game, available now on both the Xbox One console and PlayStation®4 Computer Entertainment System. Warframe, a launch PS4™ title and the first Free-to-Play title released through the ID@Xbox Program, boasts an aggressive and regular content update schedule! Set in an evolving sci-fi world, the third-person action game challenges players to fight across the Solar System and master the power of their Warframe.

“From new customization options for your Warframe and Kubrow to a chilling event mission for you to test out some new weaponry, Update 14.5 has plenty of content to keep fans busy,” said Pat Kudirka, associate producer at Digital Extremes. “We’re excited for players to chill out with the cool new content. Boots are not optional!”

Update 14.5 introduces an improved Mod card system, which has received a serious facelift, allowing players to scroll through a larger list of Mods in the Upgrade and Mod station that more clearly displays rarity and ranking; the new system also includes multiple configurations for each weapon and Warframe to allow players to compare builds directly against one another. Elemental Mods will also now display their polarities and effectiveness in a more concise manner.

A new game mode arrives, called Excavation, which will eventually replace the current Survival-type missions. Slap on your winter boots and get ready to dig for riches, because the first Excavation event, Operation Cryotic Front, is here! Players will now gather power cores from specially marked enemies in order to fuel a Scanner. Once the Scanner has located an area to drop an Excavator it’s up to you and your fellow Tenno to reach the dig site, power the drill, and defend it while it searches for the rare resource, Cryotic. To match this chilly atmosphere, new weapons and upgrades requiring Cryotic are now available for those who can successfully build them.

Prime Access has also received a refresh, with a new Prime model for Nyx. Don’t mistake this Warframe’s delicate appearance for anything other than hidden steel – players can now kick serious butt AND look good while doing it! Five new pieces are available instantly for purchase, or adventurous hunters can hunt down the pieces within Tier 4 Void missions and build them for free in the Foundry. Good luck!