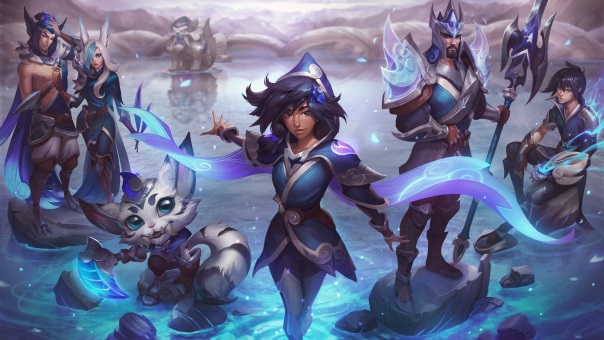 The last few League of Legends patches has been absolutely chock-full of updates, changes, and balance. So this one’s going to be brief because it’s smaller changes, balance tweaks, and minor fixes to things to make them perhaps feel more balanced and work better. Unfortunately, I missed 8.13, but I’m back with 8.14. This is also focused on Aatrox, now that his rework has happened. Let’s be honest, he’s . . . a bit on the strong side. At least during the laning phase, Aatrox is a nightmare to deal with, so he’s been tweaked a bit. I don’t want to focus on everything though, so I’m going to talk about a few of the major things, then list some of the buffs/nerfs that will be coming in this patch. One thing I think is interesting, is how gold/jungle items changed. If you have the most individual total gold on your team, lane minions will grant less gold. Now, I’m sure there are some people howling about it, but I like this change, and not just because I’m a support main and will never have top gold. This is to slow down Jungle Funneling, and they’re looking for a more long-term solution. This is tied to Hunter’s Machete/Hunter’s Talisman. This penalty, however, is removed upon completion of an Enchantment on Skirmisher’s Sabre/Stalker’s Blade.

Another champion that saw some pretty big changes is Fizz. I’ve gone on record many times in the past where I have said that I hate that little jerk. I play a lot of low-mobility characters that just get eaten up by Fizz, so I relish in any nerf he receives. Hey, I’m only human! The big thing that changed for him is that his Seastone Trident (W) no longer deals bonus damage against primed targets. It had to feel weird for an assassin to hold off on pushing one of their buttons. The goal of an assassin to leap in, murder something to death and then leap back out. The priming mechanic is gone and is coming with an on-hit buff on the active. On a kill, it sets the cooldown to 1 and partially refunds mana (20/28/36/42/50 mana ⇒ 20/28/36/44/52 mana). If there is no kill, Fizz’s basic attacks are empowered for 5 seconds (10/15/20/25/30 (+0.3 ability power)). It does more damage now over a longer period, but it’s front-loaded so that Fizz can quickly do his job and get out. It did, however, receive more damage (20/30/40/50/60 (+0.4 ability power) ⇒ 40/50/60/70/80 (+0.4 ability power)).

Karma is a champion that I love, but I simply am terrible with. She’s getting some pretty solid love in this patch because I’m apparently not the only one struggling with her. A buff might be a bridge too far, so some of her overall stats are mostly being touched up. Her Mana Regen is going up (8.5 mana per 5 seconds ⇒ 11.5 mana per 5 seconds) and Mana Regen Growth went up too (0.8 mana per 5 seconds ⇒ 0.5 mana per 5 seconds) and her armor went up (20.4 ⇒ 26). Her Inner Flame (Q) saw a bigger Splash Radius (250 ⇒ 280) but the Soulflare Detonation Damage was reduced, to lower her waveclear (50/150/250/350 (at Mantra levels 1/2/3/4) ⇒ 35/140/245/350 (at Mantra levels 1/2/3/4). This way, she sees some love and growth, but it doesn’t make her a monster in a solo lane and lets her continue to be a helpful support instead of creating a new, dangerous carry. These are the biggest, most impactful to me, but I do want to at least list everyone that got adjusted in this patch. Full patch notes will be below. This is also the update that will reveal the SSG Skins for Ezreal, Gnar, Jarvan IV, Rakan, Taliyah and Xayah. Why not Taric or Leona? I smell a bias. A conspiracy, if you will (I kid, I kid).