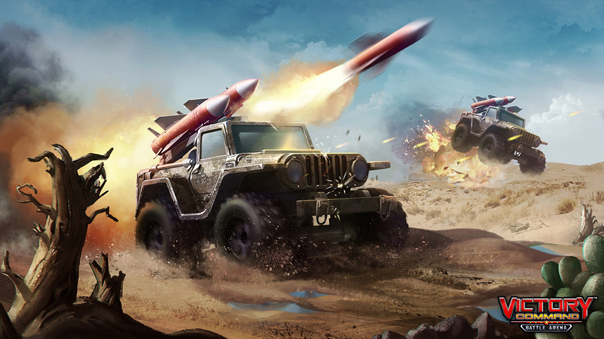 PlayGrid Games along with world renowned developer Petroglyph announced today that Victory Command is available now on Steam Early Access. The first of its kind, military MOBA (Multiplayer Online Based Arena), Victory Command fuses the battle mode style of DotA with the electrifying military tactics in World of Tanks, creating a thrilling gaming experience for every player. Moving beyond the standard three-lane MOBA formula, Victory Command adds RTS (Real-Time Strategy) controls in an open field of play and engages enemies with large-scale strategies.

Victory Command players will simultaneously command multiple units of armored, recon, and infantry units to engage in 5v5 team combat. They embark on their military career given just basic companies, and then improve their troops and arsenal by earning experience points that they can use to upgrade their company and obtain special abilities and skills. Combining the cooperation and competition of battle arena games with strategic gameplay on an open field, players can flank, ambush and trap their opponents to achieve victory. This unique military MOBA is full of additional ways to surprise and destroy opponents.

Need more info? Ragachak will be sharing his thoughts on the beta test that led up to early access later this morning!