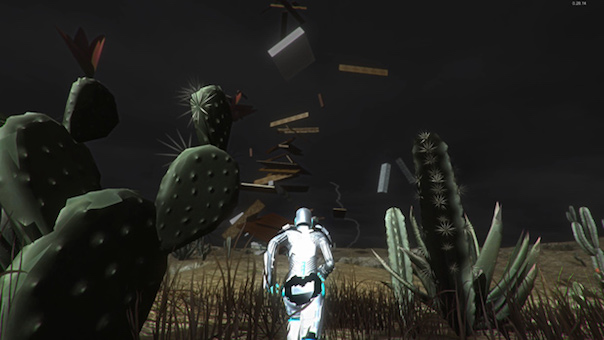 We met with Omnigon Games’ CEO & Lead Game Dev, Jeremy Hindle, and Community Manager, Dave Landrum, in San Francisco to discuss and play an alpha build of their upcoming game: UemeU (pronounced you-me-you). UemeU is an open-ended third-person building and sandbox game slated to release on PC, Mac, and Linux.

Sandbox games currently come in two types – the first being of a themed and unified style, e.g. Minecraft (mining, crafting), Roller Coaster Tycoon (amusement parks), and Disney Infinity (Disney properties). The second is more atomized and freeform, like Gary’s Mod and Second Life, where goals are self created and the toolset for creation is large. UemeU is more in line with the second type, except with even more creative freedom available to players. In other sandbox games players are provided with props and are limited to using predefined triggers and behaviors, but in UemeU you have the opportunity to make everything from scratch – It’s like a super sandbox; a superset of all other sandboxes. 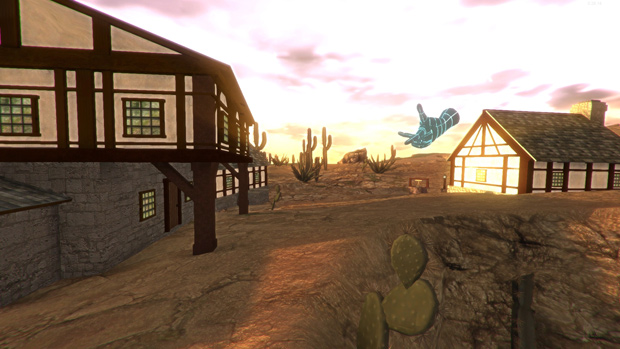 You can create some really nice scenery in UemeU.

Game Modes
There are two modes of interacting with UemeU – the building mode, and the playing mode.
The Build Mode is exactly what it sounds like – you get an interface to place and manipulate objects as well as change aspects of the world. At first, you start out with a blank world with nothing in it except your avatar (who also starts out blank) and a wireframe master hand which changes and moves when certain tools are selected or used. With the tools that appear in the interface you can place, texture, resize, and give attributes to anything you can imagine. The building interface goes fairly deep, so learning the shortcuts can be very useful and are, frankly, very necessary if you intend to build anything serious.

If you have something already placed, like a stack of boxes or an apple, you can give it physics attributes like gravity or collision, and assign it triggers or behaviors like floating or exploding on player input or actions. Of course, these are merely simple examples, and some complex systems like arenas, forests, and spaceships can be created with some dedication and effort. To make something big (and more fun than boxes and apples) lots of parts are needed, and each part can be custom made or loaded from an external source like a downloaded file. 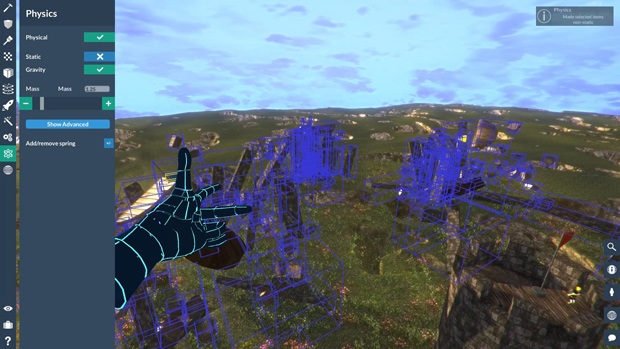 Build Mode, as it stands, is like having a modeling suite within a game and allows for a very wide range of creative styles to be explored. Within Build Mode it’s possible to create games with quests, checkpoints, goals, and bosses – there’s an incredible amount of potential. We highly recommend taking a look though the screenshots on the Omnigon website or the Steam Greenlight page to view some existing creations.

In Play Mode, avatars start out in the center of the world, idling by default, until their players have exited Build Mode. All avatars start out with the same basic third-person game mechanics that we’re all used to – like wall running and double jumping – as well as health and stamina bars. Abilities like invisibility, shooting lasers, and triple jumping can be programmed in by changing and permuting existing abilities. In theory, it’s possible to create any kind of superpower, but the server running the game can limit which abilities, or however many ability points (AP), can be used by avatars. In general, Play Mode isn’t very exciting without a built level or objective – or at least an imported or hosted map already in play. That said, it’s up to the community, or yourself, to build fun and enjoyable experiences.

Avatars themselves are highly customizable – not quite Second Life customizable – but close. Every facet of an avatar’s clothing can be changed, dropped, and re-equipped at any time in the current build.

The navigable area in both Play and Build Mode isn’t limitless, but it’s really, really big. It’s our suspicion that it will be bigger in later versions. Object count does matter, and performance scales with it, but having dozens of thousands of objects interacting at the same time works well in the current build. 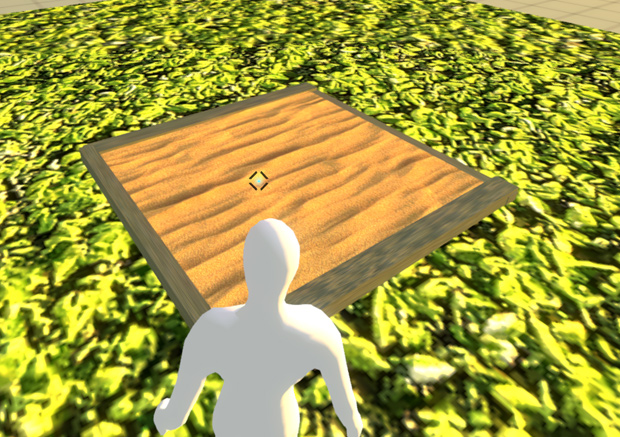 Yo Dawg, I heard you like sandboxes in your sandboxes.

What is it made of?
We had some time with Jeremy Hindle to discuss some of the inspirations and influences behind UemeU and it’s very apparent that UemeU takes elements from all sorts of games. While discussing the ability system of UemeU he shared an anecdote with us, saying “I played through Transistor and saw how the abilities combined and worked together and I said ‘I want that for UemeU!’ so the team and I built out the ability system in a few weeks.” He also mentioned that the way Valve games, like Counter Strike: Source, handle custom content on public servers is clever, and he aims to replicate that functionality.

UemeU has a few interesting technical tricks up its sleeves – the first being that it operates on the Unity engine and runs on pretty much anything. UemeU also implements a clever and space-saving method of storing object data by logging the object creation process in a simple text file. This means that when an object or creation is imported into a world it is replicated from scratch more or less instantaneously according to the logged creation info, and storing objects requires very little space. That said, this helps enable dynamic loading of content on the fly and potentially space-efficient creation sharing.

Both simple (one world) and scalable server code (multi-world) will be available for Windows, Mac, and Linux in the future. Hindle expressed that having both simple and advanced hosting options for these platforms will help ensure the success of the title – and we have to agree as other games, such as Minecraft, thrive because people can host and control their own servers on both a personal and a commercial scale.

UemeU also features voxel based rendering as well as inverse kinematic models and interactions, and will soon have an API to allow server admins to change in-game settings and objects from outside of the game – nice!

Sandbox games usually require a passionate and dedicated community in order to be fully realized in potential, but that doesn’t happen overnight. Omnigon explained that in upcoming alpha iterations of the game they would be adding functionality to enable item sharing and selling, server browsing, and Twitch integration to facilitate the growth of their early-stage userbase. We expect that the modding community will flourish within UemeU, just like it has with other titles, because of existing and planned features and the flexibility that Omnigon has shown in listening to player input and implementing requested features.

UemeU has a one-time upfront cost of £10.99 right now, and can be purchased with PayPal. As development of the title progresses the upfront cost will increase, which is currently a common approach for early access of developing titles.

Though monetization of the title outside of the up-front cost is not set in stone, Omnigon shared with us a plan for a public library of submitted creations where creations can be purchased, with Omnigon taking a small cut for cost of listing. Of course, sharing creations can be free if the creators want to use other methods of distributing their creations.

We’re pretty impressed with the UemeU alpha so far, and we’re excited about the sheer potential of how big it could be once the community reaches critical mass. Though an official “beta” and release period has yet to be determined, we recommend that you try UemeU out in its stable alpha state. Both a paid and demo version of the game are already available – download the demo because, really, when was the last time you downloaded a true game demo?