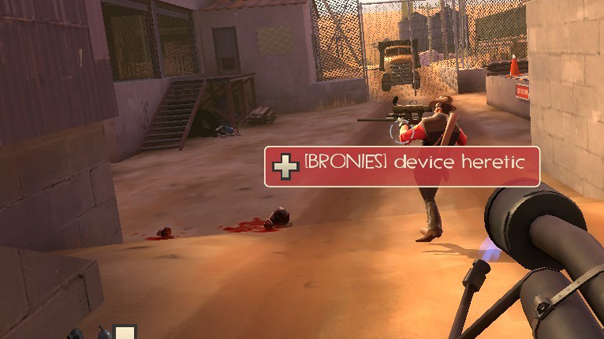 Where to start with this one? I’ll begin with the obvious; Team Fortress 2 is one of the best games to ever hit the free to play market. It was a good deal when it came out, it was one before it went free, and right now it would be a sin to miss this full-feature, explosively hilarious FPS. It was a move that wasn’t entirely unexpected, as Valve had been slowly building up to an in-game purchase model for a while, stocking the game with a plethora of aesthetic items. If you’ve played TF2 recently, nothing in this review will surprise you greatly, but if you happen to have been living in a cave for the past few years, or if your copy of TF2 has been collecting dust on the shelf, read on. 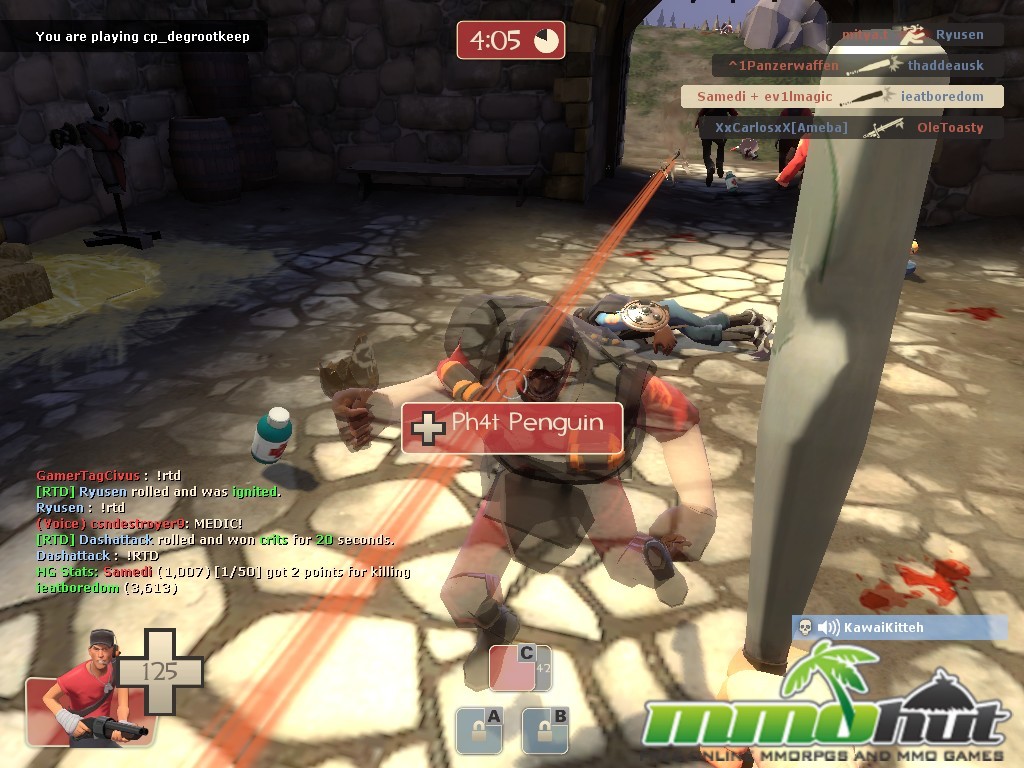 If you’re entirely new to Team Fortress 2, you might have seen the “Meet The <Class>“videos floating around on YouTube, which is one of Valve’s many ways to promote the game. These videos, still in the making many years after the game’s release, are a testament to the quality and enduring life of this product. The concept is that you play a member of one of two mercenary groups hired by two different industries (RED and BLU) to fight over various items and areas. You begin in a menu quite like other Valve games, where you either get to jump right away into the action in one of the game’s many servers, or explore some of the game’s other content. There is, for one, a developer’s commentary mode, where you get to run through the maps hearing various comments from the Valve team. You can also browse your achievements, the in-game store and your inventory, which is also where the crafting system shows up, but more on this later. What you want to do right now is to jump right away into the action!

Reduced to its simplest form, Team Fortress 2 is quite like many other FPS games. You have the choice of many maps and gameplay modes, ranging from the classic capture the flag, to some TF2 innovations like Payload, where you have to push a bomb loaded up into a cart up to the enemy’s base, or Medieval mode where everyone is restricted to melee and era weapons (Like the bow). Many of these are not played equally however, and modes like Arena are a bit more difficult to get into due to lower popularity. When you start up a match, you’re shown to a class selection screen where you can pick from one of the game’s many iconic classes, such as the scout, the heavy, or the pyro, each of which play extremely differently from one another, and fill one of the team’s many roles. The downside here is that not all classes are as equally important. Many matches will see no use for a scout or a sniper, but there is never a time when a medic or a heavy is not desired in a team. 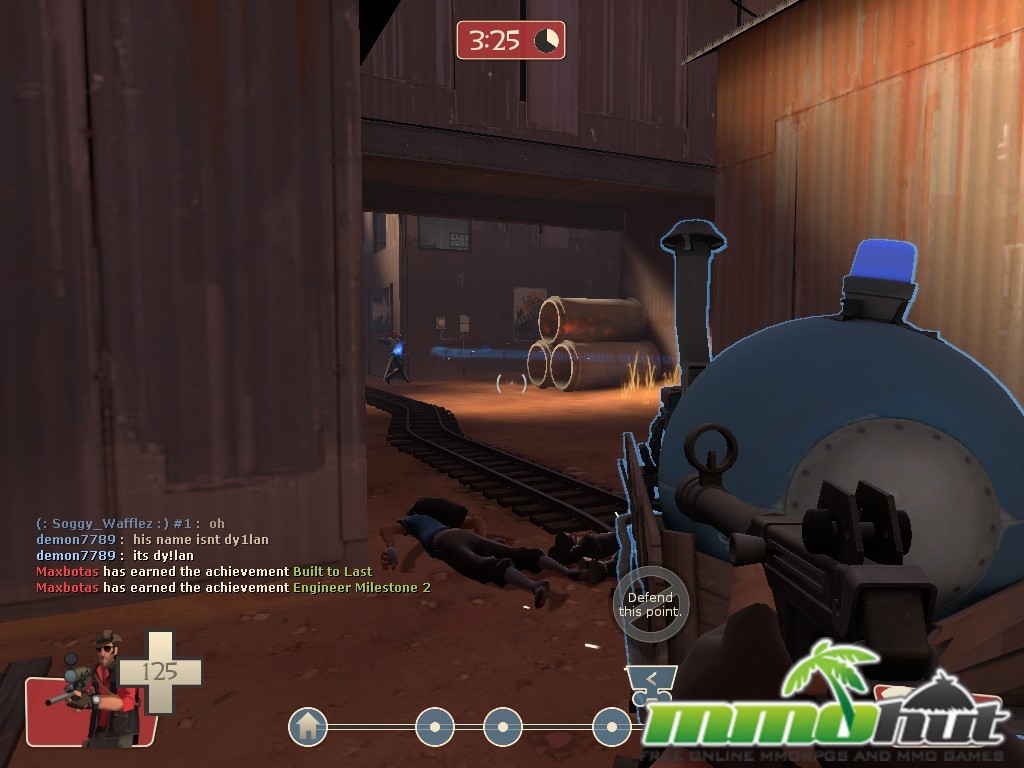 The action is a total blast; explosions left and right, scouts leaping about, people running about on fire while others get backstabbed by a disguised spy. With 8 game modes, 9 classes and a truckload of unlockable weapons, there is plenty of butt kicking to go around, enough to keep you entertained for days on end. Each class is quite simply absolute fun to play, though it may take you a few games to find which one you enjoy most, or are most apt with. As noted previously, each class is incredibly iconic, and easily recognizable, complete with voice acting, different personalities, and all with their own brand of hilarity. You read right, this is a funny FPS, and some of the one liners the characters yell out in the middle of the action are actually quite memorable, like the heavy‘s singing, or the spy‘s nonchalant “I believe I am on fire“when lit up by the pyro. Naturally, this is a team game, which means that you need to have a minimum of teamwork to ensure victory. That said, you’ll more likely than not find situations where your team is one ubercharge away from victory, and no one wants to play the medic/heavy. The same could be said of many other team games, however, and this trait can hardly be blamed onto the game itself. 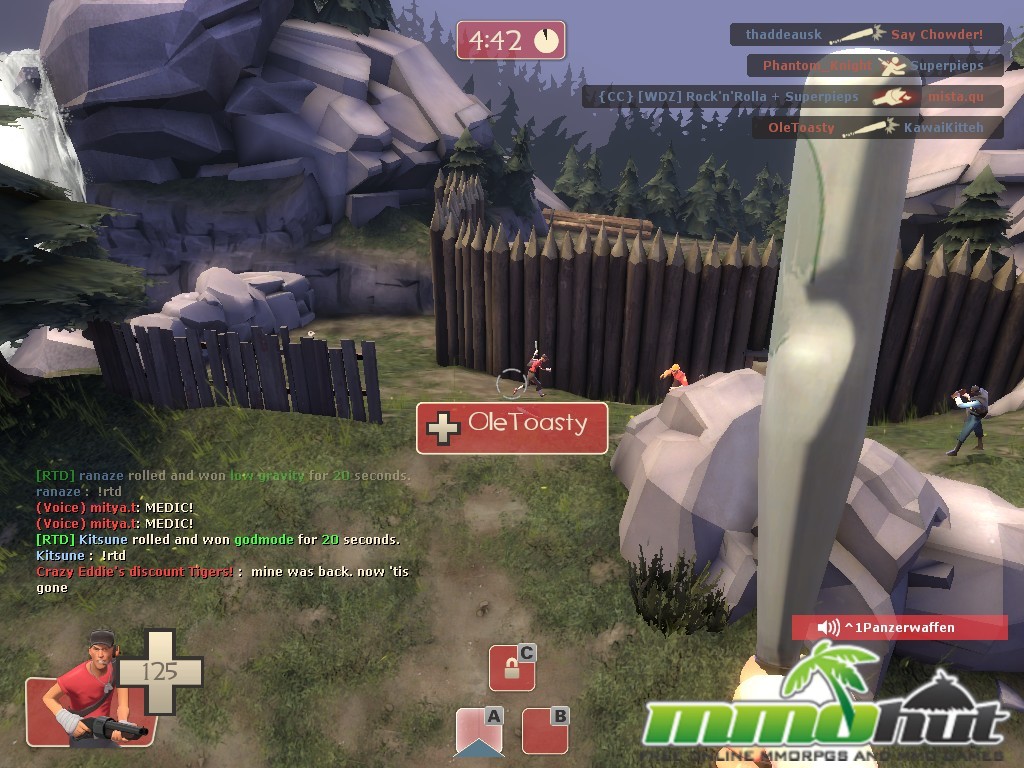 Weapon and hat unlockables are a staple of Team Fortress 2 gameplay. The game is made so that every 30 to 60 minutes, a random item will drop, most likely a weapon, and sometimes a hat. You may also unlock certain items through achievements, but these are fixed, and will take quite a bit of work on your part. The weapons are mostly original and serve different purposes amongst the classes, like an anti-spy shield the sniper can use to electrify potential backstabbers, as an example. You’ll find there the Team Fortress 2 brand of humor, with weapons going from a Jar of Piss, to a Two-Handed Sword for the Scottish demoman. Same goes for the hats, except that these are much less likely to give you bonuses, and mostly serve an aesthetic purpose. Items can also be part of sets, where wearing the complete set will give you a fixed bonus. Unfortunately, you’ll find that you’ll often get a drop of the same items, which can be frustrating even with the crafting system in place. 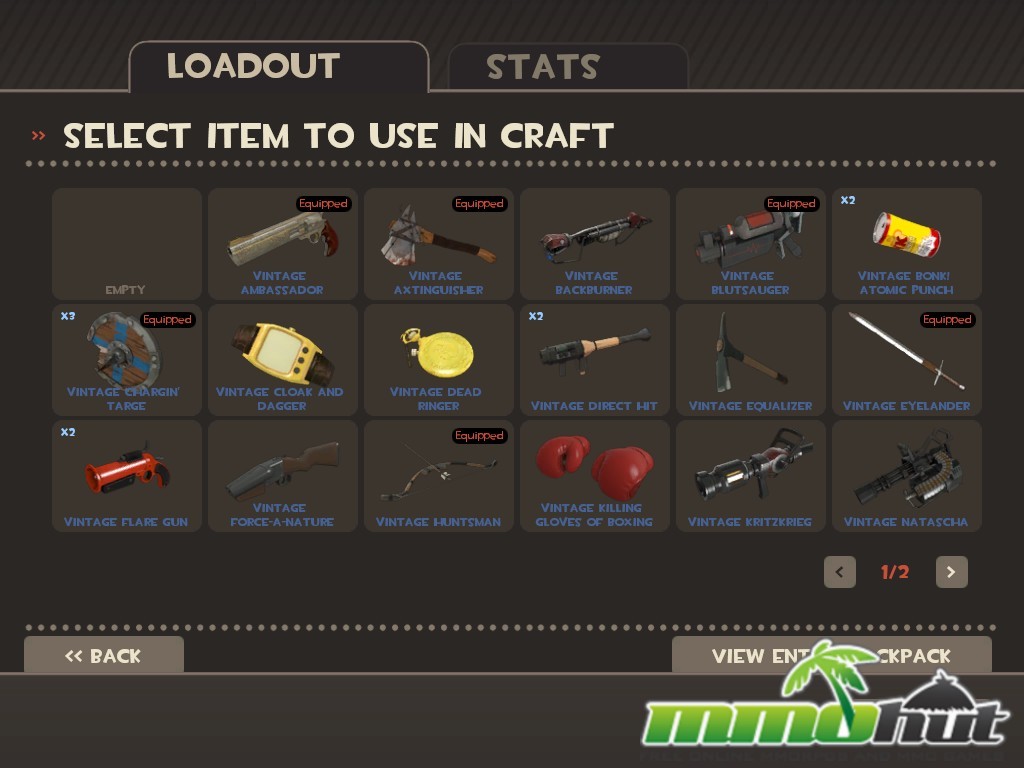 You might not see it very often in a first person shooter, but here it is, Team Fortress 2 has a crafting system. Is it good? Well, it’s useful for what it does; which is getting you rid of all those useless items just hanging around your inventory. How it works, is you get to smelt your weapons into metal or class tokens. Metal can be refined into better metal using more smelted stuff, while tokens are used for specific items. Once done, you can go into a list of blueprints where you choose what you’d like to craft, put in the correct material and voila! The item system is also where the paying system comes in. In Team Fortress 2, there are two types of account; Free and Premium. The free account has limited backpack room, limited item drops, limited blueprints, and can’t trade items with other players, which makes it pretty tempting to upgrade considering the price to do so is simply to buy an item in the store (which can be as low as 0.49$ for the Crit-a-Cola). The store is quite complete, and has a selection of items that will not drop in-game. It’s also a shortcut to weapons and hats for the lazy people out there, and the prices range from reasonable (0.99$ for a starter pack) to absolutely silly (99.99$ for an item update bundle) . You’ll also find there things like taunts, paint for your items, gift wrap for tradeable items, and etc.

If TF2 has any significant flaw, I can’t find it. During the duration of testing, I’ve found it to be bug free; the graphics tolerable to my humble machine, and the experience even more enjoyable than it was when I first purchased it years ago. The main source of frustration lies in the item drop system, but in the end, I’d say that this is but a small thing compared to the fun you can find in Team Fortress 2. Whether you’re a first timer, or like me returning after a long hiatus, there is something here for everyone, and if you enjoy first person shooters, you’d be shooting yourself in the foot by not trying this one out.