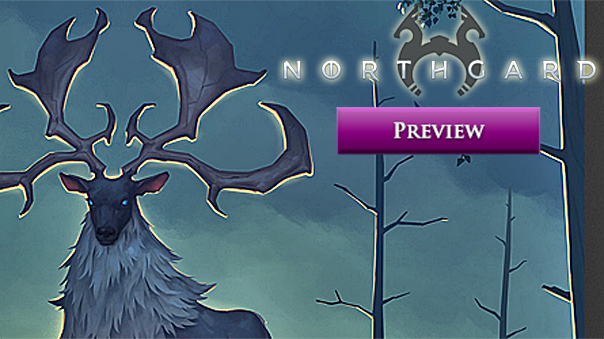 Real time strategy games are starting to become a niche that only a select amount of people like. And this is rather strange since it was such a prominent genre through most of the golden age of PC gaming. In every genre there is now a popular series that once started out as just a mere strategy game, be it either branching from PC games or board games. Northgard is an early access game that brings a breath of fresh air to the genre, and hopefully wakes the strategy game enthusiasts from their slumber. 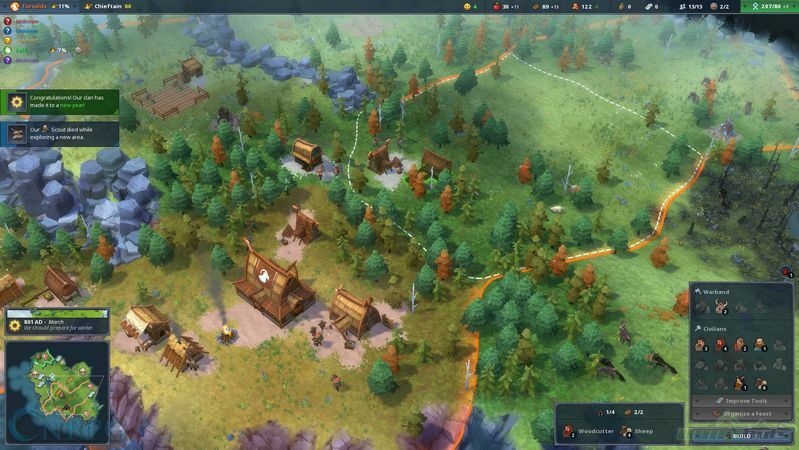 Growing up I had an absolute blast with the first Age of Empires games in the series. I still remember the day I had gotten the demo disk. I couldn’t stop playing it for weeks; every day at school I just couldn’t wait to get home to play around in Age of Empires. Having been brought up with strategy games with the likes of Warcraft, it was refreshing to see a game like Age of Empires that took a somewhat more realistic approach instead of the many fantasy worlds most strategy games took place in. And while Warcraft definitely got me interested in strategy games, Age of Empires really brought my fascination to a whole new level with the base building, and having the base be equally as important as your army. 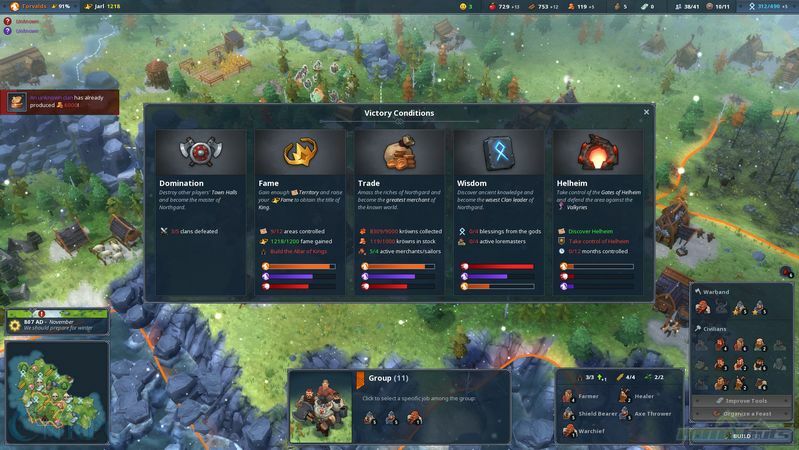 Northgard is a game that I like to see as a little bit of both, combined with a touch of Settlers. Settlers is another great strategy game that had its own thing going, but never really got extremely popular, even though it definitely deserves to be remembered as one of the greatest series the genre has ever known. In Northgard you can find the same graphical style and pace. You start out in just a small grid, a grid where only a select few buildings can be placed. If you want to build more buildings, you will slowly have to expand to areas around your base. Every area on the map has its own features, be it either wild animals that can be hunted, or stone that can be mined. The amount of buildings that can be placed in an area also differs, so you really have to play around with both your Clan, which heavily influences your game play, and your strategy, to find the right balance to outdo your foes. 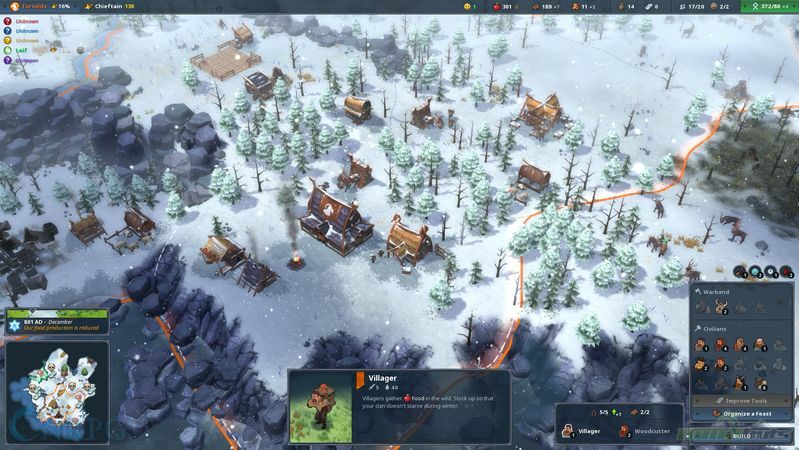 Winning the game isn’t simply done by defeating all your opponents, but there is more than one road that leads to Rome. While murdering every single one of your enemies is still a doable option, there are alternatives that really make the game a lot more interesting. You have five different victory conditions, and completing only one will win you the game. These five are Domination, Fame, Trade, Wisdom, and Helheim. As you can expect these all have their different set of goals, and you can easily win a game by not attacking anyone at all. Expanding your base to become wealthier is also a path to Victory, but let’s be fair, isn’t that a little too boring? 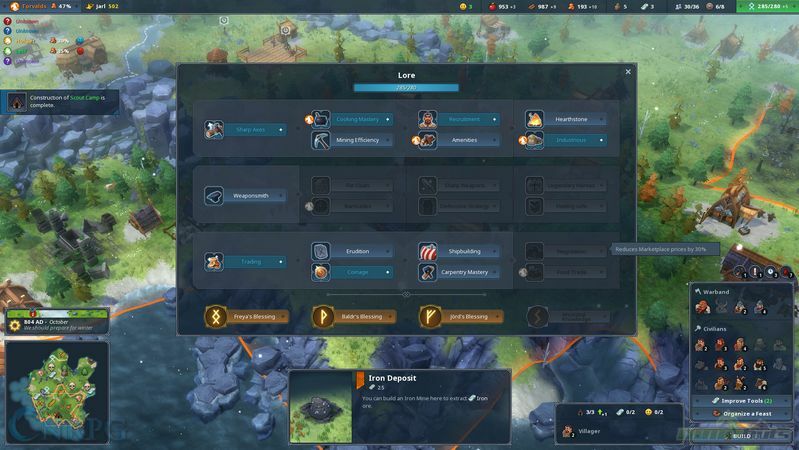 The game starts slow, with only a few villagers to play around with. You will need to decide how exactly you want to expand, and how you want to collect your resources. Depending on the clan you have chosen, you will have different bonuses that can help you out a lot at the start of the game. Currently there are four clans, each representing an animal, and when you start up the game I can recommend you to pick the Clan of the Goat. This clan will help you with your food production, which is also one of the hardest resources to manage when you’re new. Especially since the game has a winter cycle each year. And in the winter you will obviously use more resources to keep your Civilians and Warband warm and properly fed. Expansion is the best way to grow big, but don’t make hasty decisions or your people will be starving to death when winter comes. Northgard is a game that you have to take slow, and plays a lot slower than the likes of a Starcraft. 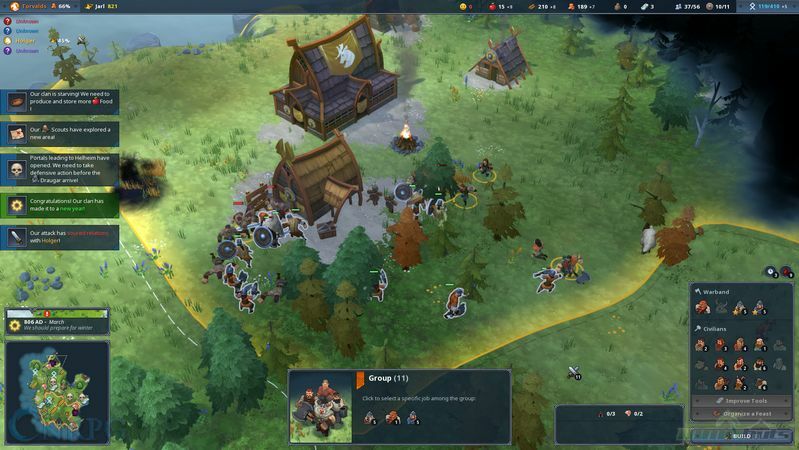 You don’t have to rush, in fact, Northgard is a game where you can just lean back in your chair, have a goal in mind and slowly work your way from the ground up. You are unable to rush, and the game in itself doesn’t require a lot of RTS actions per minute to succeed. When a new villager is assigned a role, he will automatically do his job and you will reap the benefits of this. The only thing you get to do is decide what you want to build, where you want to expand to, and what your army does. And while Food and Lumber are relatively easy to get, you will have to do your best to find Stone, Iron and Coins to really advance you forward. 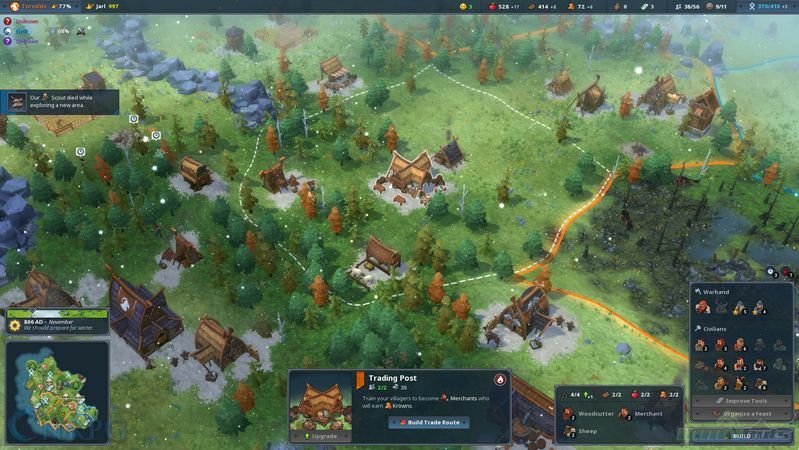 As I’ve said earlier, the game isn’t like Starcraft where every second matters and the faster player has a bigger advantage over the other. Northgard is very relaxing in this regard, and even your army doesn’t get as big as you think is needed. Having a warband of ten warriors is already considered quite the army, one that can definitely cause chaos on the playing field. The maps in general aren’t necessarily big either, even when played on the biggest size your enemies are always relatively close to you, and having scouts slowly advancing forward discovering new areas is a great way to know what exactly your enemies are doing. You never know if your close neighbor might be building an army and slowly advancing towards you. It is also a great way to know if someone is taking a different approach, like becoming the wealthy trader to win the game like that.

Northgard also has a unique approach to combat, and in general when it comes to growing your base on the map. Since all over the world you have these different areas that can be seen as different grids on a chess board type of idea, you cannot really rush into the base of someone else’s territory. But you have to slowly work your way forward, taking control of every grid until you get to the grid with the Town Hall. When the area of the Town Hall is taken over, the player loses and is automatically defeated. So defend your first initial area at all cost, or you will be watching the remainder of the game from the sidelines. 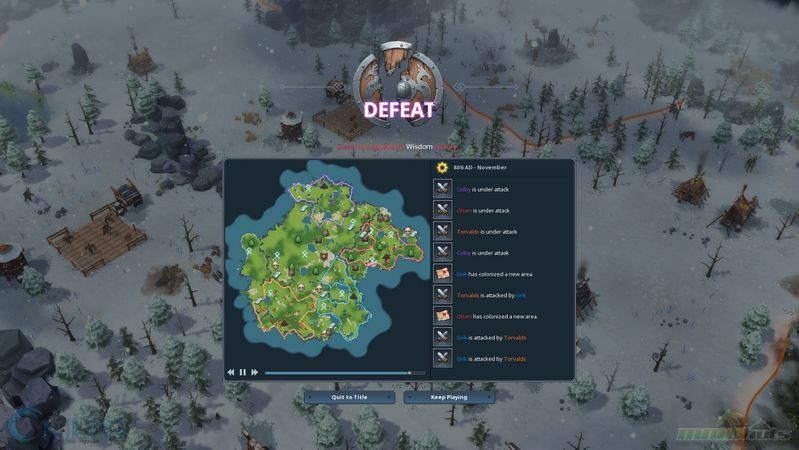 Northgard is a game that really combines the brilliant features of the best strategy games we’ve known to this day. Only it enhances them, making it better but still keeping it relatively simple so everyone is able to enjoy this game. I have played Starcraft 2 on a very decently high level, and although I never really got to the absolute top of the ladder, I wasn’t too far off. But one thing that mainly held me and many others back was how stressful the game can be. Even a game like Age of Empires can be really stressful when everything is on fire and you get attacked from every possible side. Northgard isn’t a game where you experience a lot of stress, though you always have the occasional moment where you will be scratching your head wondering where it went wrong. But it doesn’t require you to have Korean blood running through your veins and doing two hundred different actions per minute. It is a very beginner friendly game, but don’t take this lightly, because strategy is still key, and when played online against others, you have to sometimes band together to come out ahead. Just know that when dealing with Vikings, you never know when your friendship is going to end, since there can only be one victor.