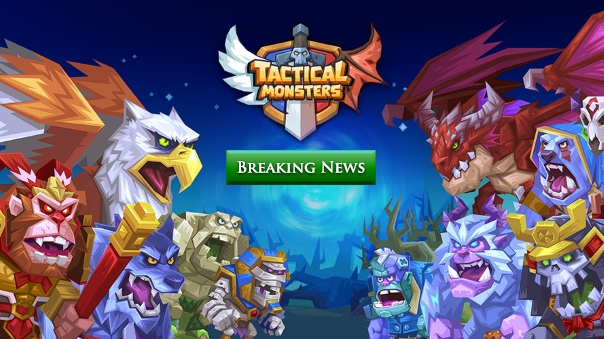 Tactical Monsters’ combat reminds me a great deal of Heroes of Might and Magic. Did that or any other titles inspire the development process of the game?

Our studio is comprised of team members that play tactical games. We all play Heroes of Might and Magic, Fire Emblem, Final Fantasy Tactics, etc. So we just wanted to make a new type of gameplay based on our passion for tactical games for the current generation of gamers. And it just turns out that the older generations of tactical players also like our game.

From a business perspective, we needed to make something that not only tactical players like ourselves will enjoy, but the market will also accept. One thing we knew for sure is that the market is always evolving and players are always looking for something new, something fresh. What we know is that the PC and console market has always been midcore/hardcore, and the mobile market is now moving fast in that same direction. So we are definitely in the market sweet spot.

Also, what’s new in the market right now is real-time battles; Hearthstone, Clash Royale, Overwatch, League of Legends etc. all have live battles. Players want to engage in battles (or in our game, we call these RUMBLES) that are live and exciting. Another thing that players want is global battles; a player from the US wants to be able to battle not just with friends, but with someone across the world, for example another player from China. Players don’t just want to win in their region or country anymore, their ultimate goal is to be number one in the world. This is especially true given that a lot more gamers these days want to be an esports champion. Esports is not just hyped up by the esports community; high schools and universities are having official tournaments, especially in the US.

So in summary, a lot of factors inspired the development and design of Tactical Monsters Rumble Arena. Some of the underlying concepts are from games that we play and love, but a bigger part of it is coming up with something that players don’t know they want, but we think they will love; that’s the spot that we are trying to fill. We didn’t know exactly what players would think, but so far we are getting player ratings of 4.9 out of 5 in the US and UK, so it looks like we are headed in the right direction.

Other than completing stages in the main game and buying them in the store, are there any other ways to unlock characters?

In Tactical Monsters, there are lots of ways to unlock characters, collect cards, and gather resources. The game has various modes and each mode not only allows the players to enjoy the variety in gameplay, but they also get rewards such as new cards! Players can get cards from the PVP, Guerilla Warfare, Rumble Tower, and Expedition modes. Players also have a chance of getting “Diabolic Cards,” or orange cards, in these modes. Gold can also be gathered in various places in the game, but most players choose to “fight for gold” in the Mine Defense mode.

Sometimes players get cards they might not necessary need, which is we why we designed the clan to be a closely-knit community; this is where players can swap cards with each other. Secondly, the more cards you donate to your clan-mates, the more “Clan Points” you get, and in return you can use those Clan Points to upgrade monsters for those that you don’t have enough cards! This also promotes the clan community, the more active a player is in the clan, the better the player will do in the game.

Speaking of the store, there are only a few monster cards available at once. How often do they circulate, or will there be options to pick from more characters as the game goes on?

We know players are always looking for new cards to try out. So we told the store manager (through code language of course) to stock new cards every day! We may increase the number of cards sold at the store as time goes on, as more and more monsters are added to the game. Our logic is that, the more cards the players are able to try out, the faster the players will be able to find their favorite team combination to be used in different gameplay modes.

I have to ask because everyone always wants to know: Is this game pay-to-win? As in, can people invest money and create far more powerful armies for PVP?

In “Tactical Monsters,” a player cannot win in PVP just because they have the most powerful characters. There are a lot of strategy aspects that players need to formulate and constantly tweak in order to win a PVP battle and stay on top of the rankings; this is also true for the other gameplay modes. For example, based on the map setting before battle, the player has to strategically choose which characters to use and most importantly, where to place them. The player needs to take into account the character’s class (melee, range, magic, etc.) and their skills (single attack, wide-range attack, skills used on friendlies, etc.).

Once a player gets into battle and sees the opponent’s characters, the player may then choose to adjust his pre-determined strategy based on who they are and where they are placed. As battle starts, things may change constantly depending on how each side operates the units (move, attack, wait, or defend).

And just to add “fog of war” into the mix; each player starts with 3 characters, and any time during battle, they can add one additional character onto the battlefield. Some players add the 4th character on the first turn, some on later turns.

All of what I just mentioned, mostly happens within a time frame of 3-5 minutes. Fighting in the PVP arena is really a thrill, which is why the game is both fun to play, and fun to watch.

Furthermore, to keep the PVP on a leveled playing ground, we developed two mechanisms. After all, what the player wants is to be able to feel “achieved” by what they controlled, and not by what was decided for them by artificial intelligence:

1)      Players can only take at most 1 “Diabolic” (orange) card to battle, so a player will not be faced with a scenario where he is going up against 4 “Diabolic” monsters. But of course, a player can take 4 “Common” (green) monsters to battle based on his formulated tactical advantages.

2)      We are also constantly tweaking our matching algorithm to keep the game fun, but most importantly, challenging.

To answer your question from another perspective, and we do want to be honest about this… for any free-to-play game, there is a certain amount of commerce involved. There are gems players can buy to unlock chests, and players can buy the Monthly Cards to get 200 gems every day. Overall, we think in general, most gamers nowadays wants to play games with no upfront cost. Even League of Legends and Dota 2 try to push sales of in-game items, this is how great games can stay alive and keep coming up with more awesome content. In Tactical Monsters, while there is commerce involved, our main priority is game balance, as mentioned previously. In summary, a player can spend money, but it’s certainly not a guaranteed way to win at all.

I love the idea of having cover to hide your ranged units behind, they can be frustrating in PVE. How will this be handled in a PVP environment? Will they be random or will both sides get them?

We get a lot of the exact same feedback from players. We always hear: “AH! This stage is so hard, but it’s so damn fun!” Having obstacles on the map is another one of our ways of making Tactical Monsters more about strategy and less about everything else. For our current real-time PVP mode, each side of the battlefield is a mirror image of each other, providing a fair and leveled playing field. The most important aspect for us is to make “balance” as our number one priority in PVP; this includes balancing the characters, and constantly tweaking our matching algorithm.