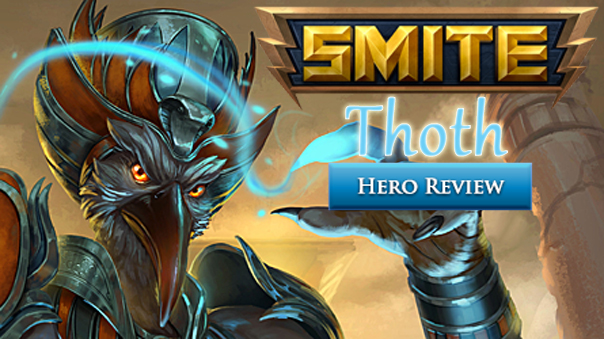 Thoth is one of the most interesting Gods in SMITE‘s Egyptian Pantheon, as far as creation myths go. And as November moves closer and closer towards Thanksgiving, and we progress towards Smite Worlds/HiRez Expo, we get another God! Thoth, Harbinger of Knowledge, Arbiter of the Damned is really something else. He has to be my favorite caster that I’ve played in the game so far. He reminds me a bit of Jayce from League of Legends, namely his gate/glyph, and how important it is to his kit. Being able to swap his auto attack for a powerful set of blasts that won’t hamper his movement is also a very important element to how he works. Thoth is listed as “Average” difficulty, but I’m inclined to say “easy to play, hard to master.” His combos are manifold and easy to learn, but it’s the timing and length of them that’s the really interesting part. Moving through the glyph with his dash, for example, increases the length of the dash and the damage on the extra hit. If you can get just the end of your dash in the Glyph, it’s like getting two for one. Thoth is a God so arrogant, so powerful, that he willed himself into existence. He is the embodiment of arrogance, and his tome, the Book of Thoth, contains all the knowledge in the world.

Thoth is incredibly mana hungry, but buying his own book early can offset that. While yes, he has a heavy mana burden with his kit being so important, his 3, Glyph of Pain, has an incredibly low cooldown that will pretty much be up anytime you need it for something. Thoth has an impossibly long list of potential combos, and you can fire your 1 through it in lots of different angles to mix people up. Though one of the coolest things about Thoth? His laugh, and his walk animation. He has the best walk animation in the game. It encapsulates him as a God. He moves as though he has nowhere in particular to be, slowly strolling forward, moonwalking even, to propel himself to whatever destination lesser gods believe Thoth is needed at. It’s classy, it’s stylish, and it made me want to play him even more. His kit’s pretty simple to understand, but he’s got some holes in his game.

Thoth is a solo lane monster. I cannot see him in the jungle at all, but I’m sure there’s someone in Smite willing to prove me wrong. Mid lane seems to be the best place for him, but with a partner like Artemis, Cupid, or any other CC Hunter that might be a really fun duo-lane. Stun their carry, smash them with shots from behind the Glyph of Pain, engage and kill them before they can get away. But honestly? Play him mid lane, be aware of faster/more mobile casters, and make them cry and write their name into the Book of Thoth. Don’t forget wards, because he’s a wimp and can’t really get away. And as much fun as he’d be in a duo lane, he’ll be worthless if you don’t win the lane, because now he’s just a caster with no damage, and you are probably down one tank. So consider him for the solo experience.

Thankfully, once you have a nice amount of mana under your belt, you can just melt waves of minions, and force the other caster to fight on your terms. If your opponent’s solo lane is melee, without a dash/engage, Thoth might be okay there too. His capacity to do lots of damage combined with free penetration to punish people who get too greedy/underestimate the Ibis-headed Arbiter should be enough to make even the most regenerative solo lanes question pressuring him.

Passive: Dead Reckoning [Buff]: Thoth pens the names of the fallen into the Book of Thoth. For every 30 enemies slain, he gains a stack, which provides 4 magic penetration. Every four levels, he unlocks a new stack. Killing a player will complete the stack you’ve presently been working on. He caps out at 20 Magic Penetration.

1: Hieroglyphic Assault [Buff]: Thoth trades his auto attacks for a blast of energy, which he can do three times. These attacks ignore the Basic Attack Movement penalty, move through enemies and apply Ability Damage [35/55/75/95/115 (+25% of your magical power) per shot] instead of regular damage. If the shot goes through the Glyph of Pain, range is increased by 30.

2: Evade and Punish [Dash, Special]: Thoth dashes in the direction he’s currently moving, and for the next five seconds after that, his next attack will be a projectile that does magical damage [ 70/110/150/190/230 (+60% of your magical power)] and a slow [20/25/30/35/40%]. The damage portion will deal more after passing through the Glyph, and the dash reach will increase by 30, as will the damage portion. However the shot must be fired through the Glyph to get the extra damage/range.

3: Glyph of Pain: Thoth throws up a Hieroglyph that appears as a transparent wall. Any projectile ability that passes through it will go farther and hit harder [15/25/35/45/55 (+10% of your magical power)]. It has an incredibly short cooldown [5 seconds] and will likely be up again by the time the old one is gone. Thoth and his allies receive a lesser damage bonus to their auto attacks traveling through it, but no bonus range [5/10/15/20/25 (+5% of your magical power)]

4: Final Judgment [Attack, Line]: Thoth summons pages from his book, channeling up to four of them. When all four have come into existence, he fires them forward in a line, dealing damage to everything caught in its path [360/440/520/600/680 (+140% of your magical power)]. The range and damage is increased through the Glyph of Pain, and has a long range on its own [100]. Thoth can trigger it early however, for lessened damage. Unlike most ultimates, you’re not immune to CC and can be interrupted while channeling.

Don’t you know about the Word?

I’ve seen two pretty popular builds for Thoth; one is straight damage, maybe a defense item or two, and one is magical damage of course but focuses primarily on CDR. I can see the argument for it, because that CD for Evade and Punish is brutal. I think I got it down to 15 seconds or so? As far as build though, I like to mix those up. A little CDR, with items like Boots of Focus, and Chronos’ Pendant, maybe Telkhine’s Ring, or Breastplate of Valor if I’m in a real bind for CDR.

Items I’m also fond of for the damage department: Spear of Desolation late game, because damn-it, that thing is expensive. Saving for it as your first item is a ludicrous and stupid idea, unless you are just farming Gods instead of minions. Doom Orb, if I’m feeling cocky, or Banecroft’s if I’m feeling froggy. Both are incredibly risky unless you have a knack for squishy low mobility mages already. Spear of the Magus is another fun buy because who doesn’t love more Magic Pen?

Dynasty Plate Helm isn’t a bad one for him, as far as defensive hybrid items go, as well as Spirit Robe or Magi’s Blessing. Depends on what you’re after! A starting item to consider is the Soul Stone too. But what do I want to rush first? Book of Thoth of course! It’ll offset your mana hunger, help you build some stacks, and give you the lane presence you most certainly want/need.

Like I said before, Thoth is my favorite caster in the game right now. He’s probably not the strongest, but he brings plenty to a team. He’s got butt-tons of damage with the right positioning. That’s what Thoth boils down to, as far as I’m concerned: Position, position, position. He takes practice and a little bit of daring to get in with him, but with the work put in, you’ll make sure everyone knows the bird is the word, and that you’ve got a story to tell them: Dr. Thoth’s Wacky Book of Asswhippins has their name on it. Literally! I don’t know if he’ll see a lot of bans or SPL action, but I would love to see CC/tank teams built around his ultimate. Stun everyone in a clump and watch them melt into nothingness under the weight of the Ibis-headed Thoth.