SMITE Hero Review – Artio: I am the Bear God 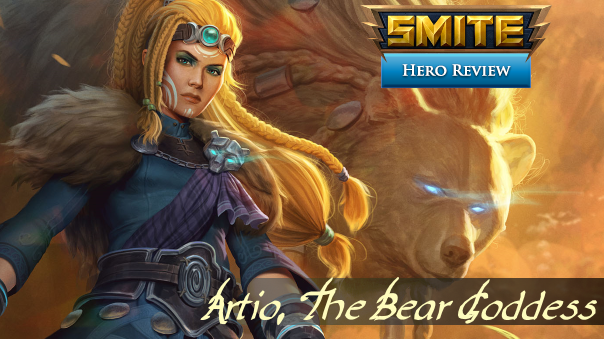 The goal isn’t to kill, and isn’t to cc. It’s to instill psychological fear of what you could do that makes enemies not want to fight in the first place. Unlike Hades, her “ultimate” is never on cooldown. The fear is always present.

Behold, the latest God to come to SMITE: Artio, the Bear Goddess! I love Artio as a Guardian. She’s an absolutely beefy crowd-control/tank machine. She brings so much utility to SMITE, so much power in her lane/arena. But she does cause me a little concern. Recently I’ve been talking about the notion of power-creep, and I do worry that guardians like her can replace entire groups of other Gods, at least from the outset. The idea of power-creep is that older Gods would be replaced and become useless because these new ones are so powerful. And sure, a lot of the more recent Gods have fairly bloated kits that can do wondrous things. Just look at Terra! Her CC-laden kit and the ability to build out of the box to be successful, I see the same thing happening with Artio. She has 0% power scaling in a fair amount of her kit, she can go more than the duo-lane, and can do a whole pile of things. But will that make players stop using Ymir, Khepri, Sobek? Of course not! I think the nature of power-creep in SMITE should be addressed but now is not that time. She has a fairly stacked kit, but I find that it’s pretty reasonable. There’s a huge wind-up on her damage ability in bear form, she has no “ultimate” other than her stance change. You can build her pure damage, and it’s very strong, though she shines brighter as an unstoppable wall of tanky fury. I think Odin or Hercules in the solo lane would still stop her dead in her tracks.

Artio is the Bear Goddess of the Celtic Pantheon and their first guardian. She’s the Goddess of Wild Life, Transformation, and Abundance. She’s also been referred to in some circles as the Goddess of the Hunt. The call of Artio is a call for protection, that nature and the forces of life are working to save you. However, her ferocious claws and staff decompose those who stand in her way. In life, there is always death. In my research, I also found interestingly enough that it is likely that Artio was absorbed by the Christian Church to become Saint Ursula. Unlike many of the other Gods I’ve reviewed and researched, I have not seen many tales of depictions of great feats by Artio. Instead of being a legendary figure or hero, she’s a wild force of nature, swapping between her Bear Form and her Human Form at will, providing for those who happen to be on her side, and woe upon any whom stand against her.

Passive: Decompose [Debuff]: Enemy Gods hit by Artio’s damaging abilities start to decompose, lowering their Physical/Magical protections. The effect stacks up to 8 times [4 seconds]. Each debuff is 3% of both protections.

2: Entangling Vines [AOE, Cripple]/Ferocious Roar [AOE, Stun]: Druid Form: Without warning, an aura of vines springs up at the feet of Artio. Enemy Gods caught in it lowers their Magical or Physical Power for as long as they’re in the aura, as well as crippling them [5/10/15/20/25% Power Debuff]. Bear Form: Artio lets out a horrific roar, and all nearby enemies are stunned [1/1.1/1.2/1.3/1.4s] and in addition, she also gains Physical/Magical Protections for 4 seconds [10/20/30/40/50 Protections].

4: Shapeshift [Unique]: Artio Shapeshifts between Druid and Bear forms. Passive: Each time Artio hits at least 1 enemy with an ability she gains 1 stack of Invigoration. Invigoration increases her Movement speed and MP5. Stacks last for 4 seconds and stack up to 8 times.

Artio’s pretty strong compared to a lot of the other tanks, but she’s not the greatest. She can be caught out, and though on paper she’s got a bit less damage than the other Guardians, she’s probably packing the most utility, except maybe Terra. But what I love about her is that there is almost no cooldown on her Shapeshifting. That means a lot of her abilities can combo by herself; she doesn’t need anyone to combo with, but it certainly helps. You can turn on the Entangling Vines, shift into Bear, charge in with 3, cancel early and hit the 2 for the aoe stun. After that, if you have say, Artemis with you, lay a trap under or behind them, hold them in place for even longer, and end with the cripple/slow so they can’t get away. There’s a very clear drawback for this though: if it fails, you don’t get a kill and you’re basically out of mana. It’s incredibly cool to watch and can, without a doubt, feel pretty intimidating to watch a tank do so much in such a short period of time. She can initiate pretty easily, and slow down anyone she desires, and she partners with quite a lot of carries. One of the things I saw in Arena that I genuinely enjoyed doing, and I think I’d like it even more in Conquest [a’la Fat Loki/Cabrakhan] is duo-tanks. Have a Guardian that can hang solo, and have Artio also. The rest of the team would be hyper-carry, huge damage nonsense. I can’t imagine having anymore lockdown for a teamfight than those two. Are they about to walk through the stone walls? Stun them!

The name of the game for Artio is “Lockdown.” She has enough slows, stuns, roots to keep people at bay in the early game, but you have to be conservative with how you use them. I’ve said she’s mana-hungry and in addition to that, her cooldowns are pretty beefy. Thankfully, her cooldowns per form are not shared. But once you’ve built some CDR for her and can utilize her ult? I fear in the solo lane she might be too strong. She can heal herself, can always be using abilities so she can always regenerate mana, and will weaken her opponent to the point where that swipe will ruin their whole day. I do worry that she’s going to be nerfed because players are very quickly whining about how “complete” her kit is. To get the most out of her, I feel like you really have to be a master of changing stances and utilizing one skillset with the other simultaneously. Sure, she’s strong, but I think she has a decent difficulty curve. But her gameplay will be solid in any lane, whether you build her for damage and go into the jungle, or in solo lane. But I’ll be playing her in the duo lane, where I think she belongs.

While she can bolster her own defenses virtually on a whim, building other defensive items will certainly be your ideal situation. I mean, she is a Guardian after all. But what’s the most important stuff for her? Items that give 1. CDR 2. Even MORE Utility for the team. She’s a Utility monster, so let’s focus on that. Could you build her with more damage and be an annoying bully? Of course, you could, but that’s not what we’re here for just yet. Honestly, I like to look at the same items I would for Terra and Ares, in some combination. Aura items are so great on a tank that can stick in the fight as long as Artio can. My favorite item for Artio? Shogun’s Kusari. I’m honestly waiting for it to be nerfed into the ground. Come on! CDR, CC Reduction, MP5, Magic Resist, AND an Attack Speed boost for allies within 70 units? It’s a no brainer. If you’re like me and like to chase, Shield of Regrowth is going to make catching your prey incredibly easy. In addition to the speed of the bear charge, the Health, CDR, HP/MP5 and the Movement Speed boost are going to be a whole lot of fun. I’ve been using more tanky boots, but I’m starting to come around to the “build CDR boots” side too, so I can hit cooldown cap with ease. The key for me is to build stuff that is going to help more than just me because as a tank, I need to help the whole team. It’s not just about me. Or … you can be a jerk and go for damage. Then you’d want Breastplate of Valor and a whole host of other annoying CDR/Mana Boosting items so you can spam your aggressive style as long as you want. You can take her where you’d like, and the right build will take you exactly where you want to go.

Artio is incredible. She is a bear in likeness and in combat. She does have a pretty bloated/full kit of abilities, and I am not looking forward to seeing her in other lanes, not to mention on the other side of the field. I’ve been wondering what a stance-changing Guardian might do, and while I am fairly certain she’s going to be “balanced” or nerfed, I enjoy what she brings to the game. I feel like there’s a difference in “innovation” and “power creep.” A lot of earlier Gods were pretty simple and focused on what they could do. I don’t know that I agree with the idea that we should keep Gods simple because technology has grown. That’s not the nature of the game. I like seeing new and more complex characters, ones that require more strategy and thought. Am I going to stop playing Ares more than any other God? Don’t bet on it. Will I be playing Artio to Mastery X though? That’s also going to happen. She’s got everything I need in one convenient place. She can stop almost anyone, is useful to every member of her team. She’s going to be welcome on most any team comp, which is a boon for me and for Guardian Mains everywhere.