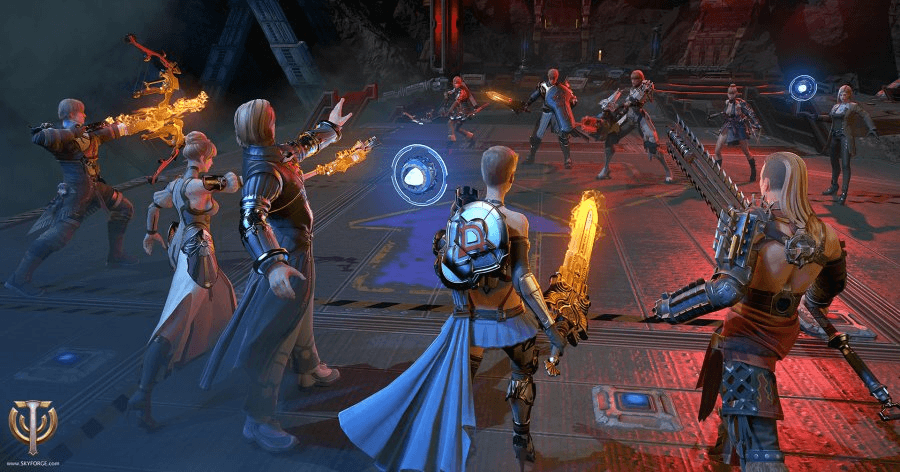 Allods Team, Obsidian Entertainment, and My.com are excited to announce that Skyforge will hold its fourth and final closed beta test from June 23-29 and will give all players access to two high-tier classes, the Knight and Alchemist. To celebrate this final beta stage, the number of closed beta testers will be significantly increased.

In addition to instant access to the Knight and Alchemist classes, players will have an opportunity to check out a number of considerable changes which have been made to Skyforge based on internal data, bug reports and player feedback from previous beta tests. As a result, several thousand fixes and changes have been made to Skyforge since the end of the previous beta test. To implement these changes the upcoming closed beta test features a new build of the game, with a progress wipe on accounts.

Some of the major highlights, updates and features available in the upcoming test include:

(During the test only) Exclusive instant access to two high-tier classes, Knight and Alchemist – Players will get a chance to try two high tier classes available only in the upper ascension atlas: the Knight – a powerful tank class armed with a shield and spear, and the Alchemist – a half-mad scientist support class with mastery of corrosive chemical compounds and invigorating elixirs.

Client Optimization – The data collected during the previous CBTs helped to improve the game’s optimization and provide support for more configuration types. The maximum frames per second are now 30% higher than when beta testing began.

Orders and Followers – Since this is one of the most important parts of the game, the development team has put a lot of effort into improving the user experience and as a result, managing followers and their resources has been improved.

Big changes were made for different aspects of gameplay. The difficulty level of adventures now can be chosen by the player after they’ve unlocked them. There will be no more prestige limitations between players who want to participate in adventures as a group, with players receiving rewards based on the range of the group’s prestige.

Grouping with others for adventures is now easier than ever, with recently vacated spots being automatically filled with new players during the adventure. Players can now automatically search for others interested in tackling PVE adventures, so if players don’t have a group they can choose to be matched with others automatically. For 5-man group adventures, pre-formed groups can now enter regardless of class makeup.

In PvP, the matchmaking system has optimized how players are grouped for battle in order to make it easier to find matches.

Along with the addition of three new classes, progression through each class has been streamlined to enable players to progress while still progressing through the upper layers of the Ascension Atlas.

Outside of the initial talents and abilities, classes now use their own unique class sparks to progress. This way you no longer need to choose between advancing one class or progressing towards others.

Pantheons – Pantheons are now available, allowing players to create their own or join others. Many of the features Pantheons provide will not be accessible in the timeframe of the closed beta test. Those will be in the upcoming open beta test!

Equipment – During previous closed beta tests players showed an interest in being able to acquire additional pieces of equipment. With that in mind, Amulets and Trophies have been added to the game to create four and two new equipment slots respectively.

Portal – Skyforge’s new, all-inclusive web interface, the portal, provides integration with the game, including a forum, chatting with players that are in the game, viewing player items or equipment, a talent calculator, managing your Order, and more. While not all of these features will be readily available during closed beta testing they will be made accessible during open beta testing.

UI – A large portion of the UI has seen changes to improve readability. Some of these changes include the Skill, Order, Equipment and Options menus.

Chat – The chat system is now more in line with the chat systems found in other games, resulting in a much simpler and user friendly chat experience.

The Skyforge team will be inviting thousands more players to join the Closed Beta 4 test and will be giving all Founder’s Pack purchasers additional keys to give to their friends! To join players can sign up for a chance to be invited on the official Skyforge website, or get one of the Founder’s Packs that grant various bonuses along with closed beta access and Early Access to open beta: http://sf.my.com/us/founders-packs

With Closed Beta 4, the closed beta period of Skyforge will come to an end, with open beta to be announced shortly after!