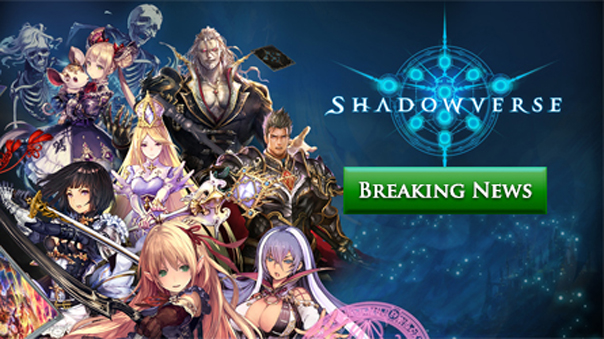 Back in March around the time of PAX East, my content team was getting hammered just as a mobile review request came through my PR pipeline. With no one available and our site’s budget already pushed to the limit, I did something I rarely do and blindly accepted preview coverage on the game. To my delight, that random game was Shadowverse a high fantasy anime styled Hero CCG from Cygames, a company rather well known for producing not only mobile games but even dabbling in creating anime based on them – as is the case with Granblue Fantasy. The characters on offer in Shadowverse were not only pretty and unique, but had sass that hinted at much deeper character development. Their decks carried culture that bolstered their persona much further, and within days turned me into a bit of an addict dabbling through the seven playable heroes. If you’re unfamiliar, you can read my full impressions on that beta right here. 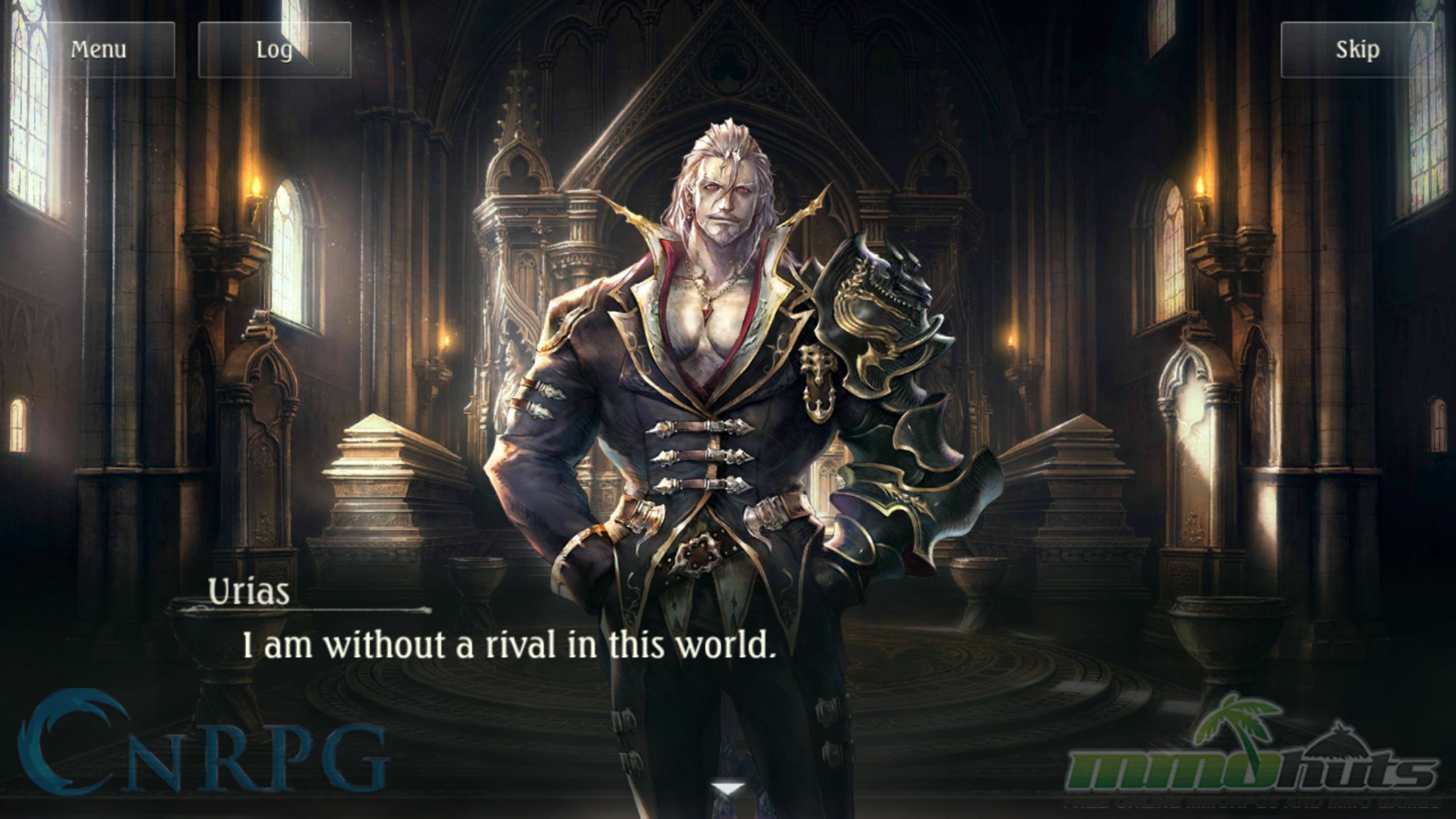 Urias is your typical game designer seeking an unrealistic challenge.

But as good as the game was, it was certainly not without its faults. However in an event that surely confirms the coming apocalypse, Cygames did something few developers have had the sense to do. They read my critiques, shared them with their fans, and then invited me to a private meeting in Little Tokyo during E3 2016 to showcase just what they had done to rectify them. As I spent half an hour chatting back in forth through their translator while my content team JamesBl0nde and Bakerman Brad dabbled with some VS AI battles, one by one I checked off in my head my issues with the beta, and how they had addressed them. You know what? They addressed them all. With style! Still not perfect, mind you… but let me hit the key points that the already dedicated fanbase that experienced the beta should be happy to hear.

Stop Hiding the Story, Damn It!
While completely unrelated to the mechanics of the card game itself, my biggest gripe with the beta was actually the presentation of the story. Any westerner that watched the following preview trailer likely scratched their head and blew the story off as poorly localized gobbledygook.

At best I figured they would post some deeper backstory on their website and call it a day. When I instead logged in to find fully voiced cutscenes tailing the escapades of not only the seven deck masters, but even a few side characters that might become playable at some point in the future, I was blown away. The stories even intertwine with each other to present a cohesive and well translated journey that makes you want to play through as every character to understand the full narrative. Plus it leads into the next positive… 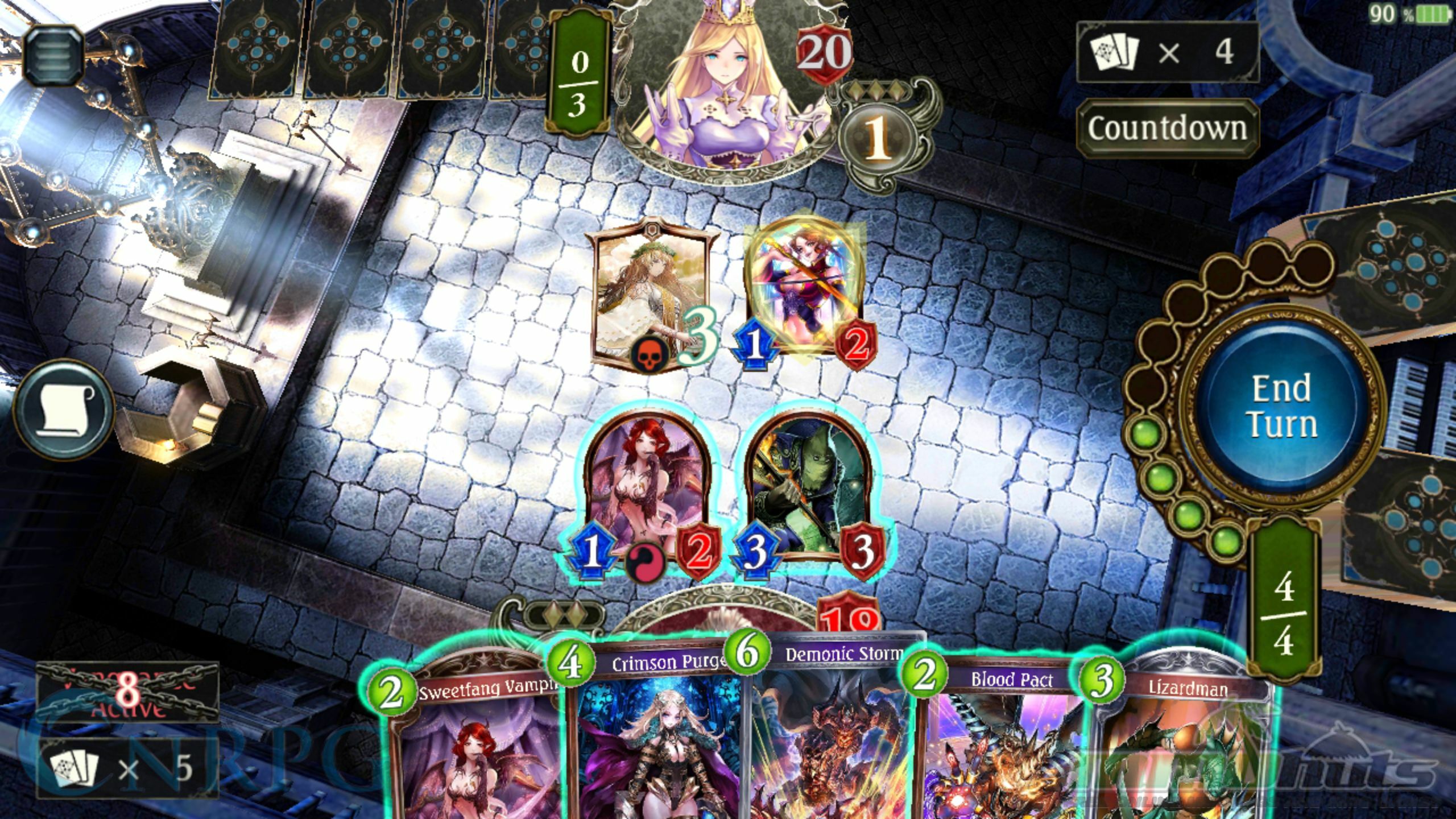 The user interface received some serious overhauls since beta.

This Game is Hard! Not Everyone Played Hearthstone (maybe?)

My time in the beta consisted almost entirely of guess and checking my deck against the AI in various degrees of difficulty until finally building up to fighting their decks at full power. I had to. I knew the more savvy card game players were waiting on the interwebs to destroy me if I could barely hold my own against the AI with a beginner deck. Props to Cygames, their AI might be slow at calculating moves at times, but it knew how to play to the strengths of their decks very well.

Still while fun simply because the core gameplay is so well made, it was a bit of a slog. Slowly winning matches to build up my decks to stand a chance likely wasn’t going to have as much appeal to others as it did to me. The introduction of the story mode kills two birds with one stone here. Essentially if you use story mode as your tutorial, Shadowverse begins to feel like a CCG RPG. Not only does it introduce you to each hero’s strengths in tutorial fashion, it then slowly scales up the challenge as you face off with increasingly more brutal battles. Winning them earns you credits and other rewards to further power up your deck. But in the end if you don’t cash shop or start grinding out online missions, you will likely need to switch to a new deck and start building out and winning their story missions in order to get resources to build up your other decks. This is a fun experience as you begin to edge each character towards their goals, seeing the same events from varying perspectives and gaining a greater understanding of the overall narrative and plot as you do so. Characters that might seem absolutely evil at first are revealed to just be misunderstood when viewed through the perspective of other characters. It honestly beats the pants off every other hero CCG out there in its presentation and concepts, and without needing to bench its success on an already existing IP and fanbase. 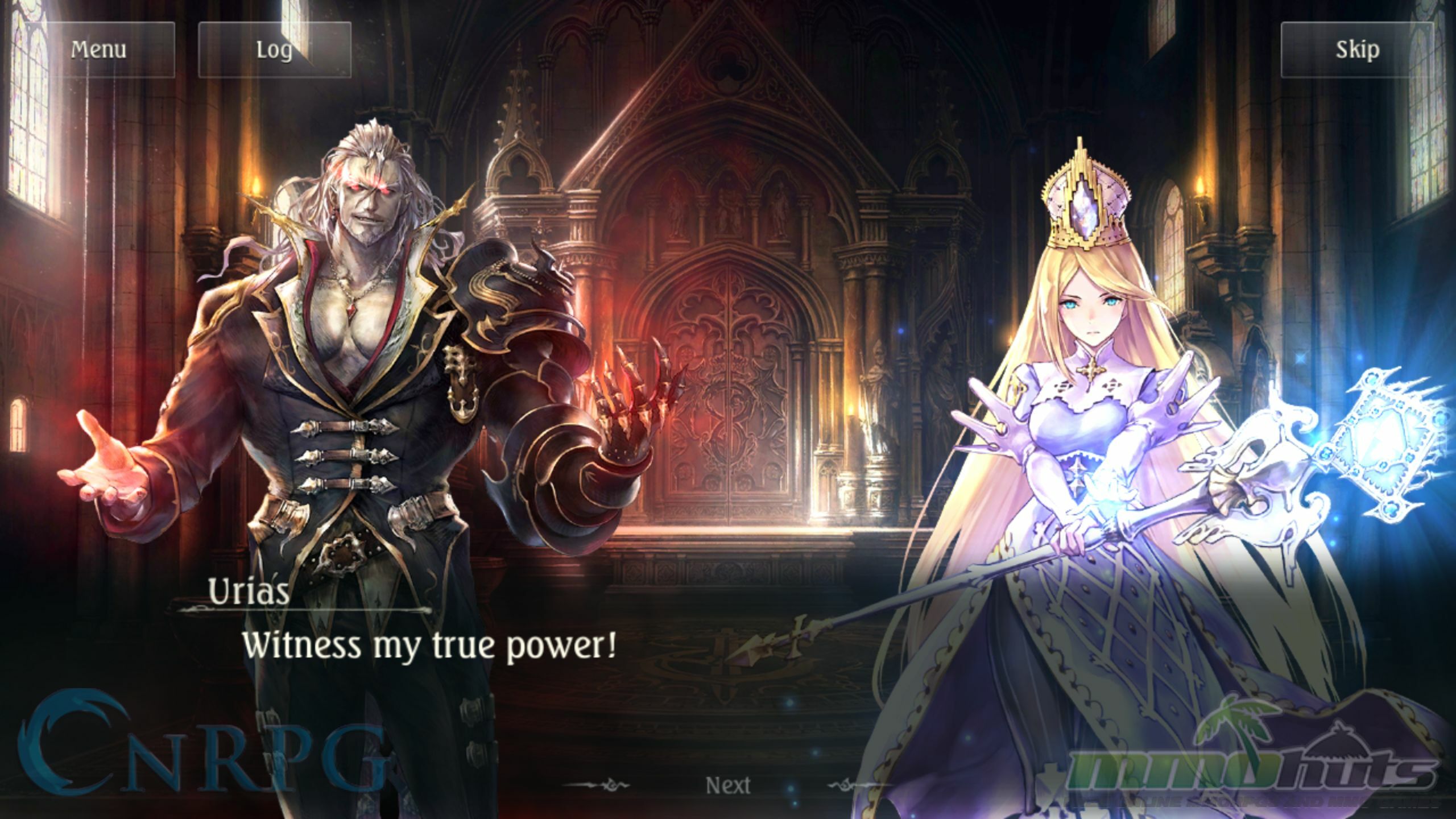 Don't expect a super deep storyline, but there is enough here to feel a greater understanding of each character's motivations.

My one gripe here is small and likely related to their efforts of pacing the game. They removed the ability to read the card lore in-game. This was likely to speed up combat between live players, but I wouldn’t mind having the option back in the PvE modes when you are taking your time so you can get to know your deck better. Either way, this was a minor loss compared to the vastly improved UI upgrades in the new version, including a much more sane emote system compared to the nonsense we saw before.

My Backstory is Deeper than my Deck Strategy
Pairing that back with gameplay itself, Shadowverse had a serious issue on the competitive spectrum. There weren’t enough cards. Even with a unified pool of neutral cards featuring mercenaries and angels that any deck could draw from, thanks to the advanced speed of resource gain in the beta I quickly unlocked 95% of the cards and realized there simply wasn’t enough variety to go around. Each deck had roughly one viable max level strategy. It might be altered slightly but not enough to give each hero a real sense of strategic focus options. The answer was the game needed more cards. Far more cards. And then the tweets began… Over the course of three months, Shadowverse continued rolling out new cards at an alarming rate. Some I worried about in terms of balance but I was pleased to say they were at least taking the risk. I’m still a long way in the soft launch from unlocking them all, but new and exciting cards are already popping up that could entirely change the way a deck is built and played. 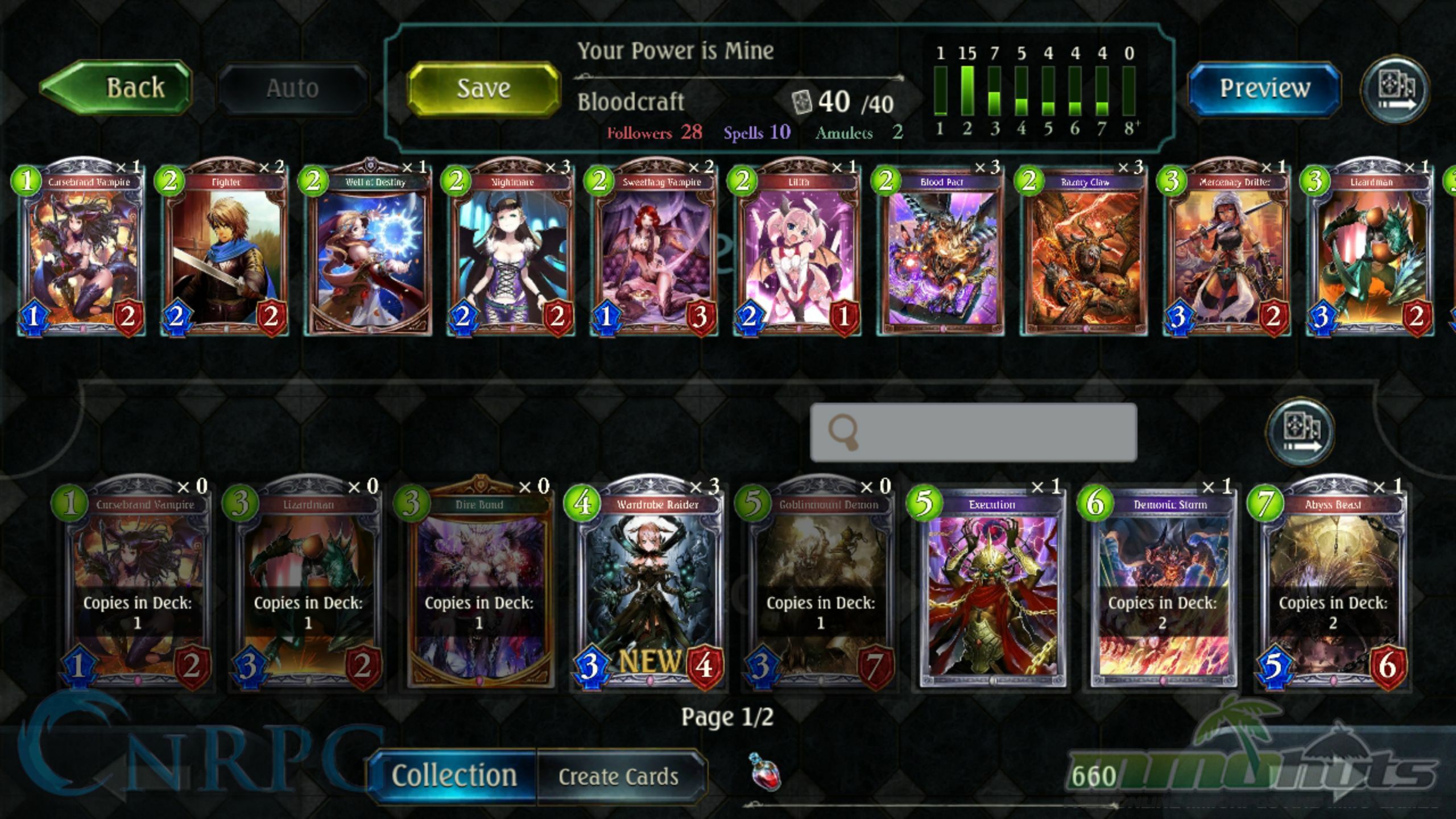 Not only have more cards been added, but key cards that help balance lesser decks and expand the possibilities of others.

Rower the dragon tamer for instance was all about desperately surviving till late game to unleash all powerful dragons. Now he has an option that cuts the summon cost for both heroes in half to force your foe’s tactics into a tailspin as you suddenly spring late game battles on them. Luna, the world’s most terrifying Japanese little girl of horrors trope, was trapped in a pattern of requiring her shadows resource to do anything of value. Now she has enough “last word” summon on death cards that she can build entirely around minion master tactics that are almost entirely independent on requiring shadows to be successful. Arisa the elven fairy guardian can now stack her deck with far more efficient low cost summon cards to empower her large hand cards or multi-summon turn cards for greater effect. With less of your 40 card deck focused on stacking low cost cards, you can build out more diverse mid-game tactics to keep your foe guessing. That’s just a few examples I’ve stumbled on in my brief time testing the new version.

Final Thoughts
Cygames has proven to me over the past couple months that they’re no joke. With 1300 employees backing their projects including members of the art team behind their globally respected flagship title, Rage of Bahamut, they’ve shown their game can adapt and grow quickly to match player demands. Over 500k players worldwide are signed up for the global launch (minus China) expected sometime between July and August, with cash based tournaments promised to follow. They’re even reaching out to strike up partnerships (I pitched Arcsys with Guilty Gear as I feel their wacky characters would blend into this world amazingly, not to mention they haven’t been opposed to cross-over partnerships in the past) to lure a larger audience of fans into their realm. I’m honestly rooting for Shadowverse’s success and hope it does well enough that we get to see their animated and twisted heroes in some form of anime just like the Granblue Fantasy treatment Cygames offered.

Check your respective appstore and see if you’re able to get into the game. The game is certainly polished enough to give you a good time right now!