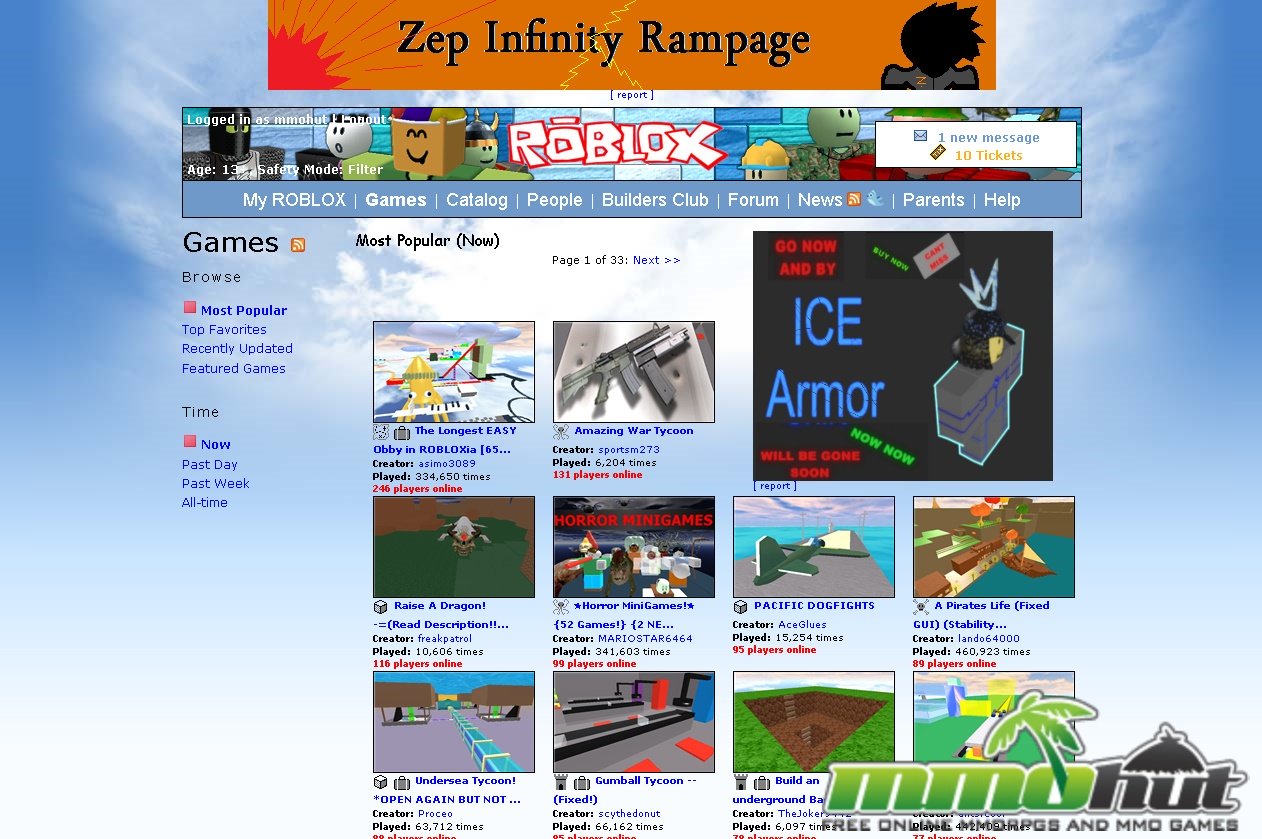 Roblox is a truly unique gaming site. It is geared towards children as young as 6 years old so it places a strong emphasis on parental controls and profanity filters but it goes so much further than other sites catering to the same audience. Games like Club Penguin and Neopets may give kids a vibrant world to explore but only Roblox allows them to craft their own. First released in 2005, Roblox has been steadily updated since then but lag issues and poor visuals still give it the feel of a work in progress.

Account creation in Roblox is quick and painless, players don’t even need to enter an email address but doing so will allow password retrieval and reward players with a ‘verified’ hat. Players start with 10 tickets and are free to browse through the site. The Roblox site is designed much like a social networking page, with a strong resemblance to the old MySpace theme. Players can add friends, leave messages on each other’s profile pages, and even join/create groups. While these features are nice to have, they are not what makes Roblox interesting. Players can get to the fun stuff by clicking the ‘Games’ tab on the top menu. This takes them to a page that lists the most popular ‘places’ created by their peers. In order to enter these places, players must download and install a special Roblox browser. Once installed, this browser takes players to the Roblox page and allows access to other player’s games and the ability to create their own. 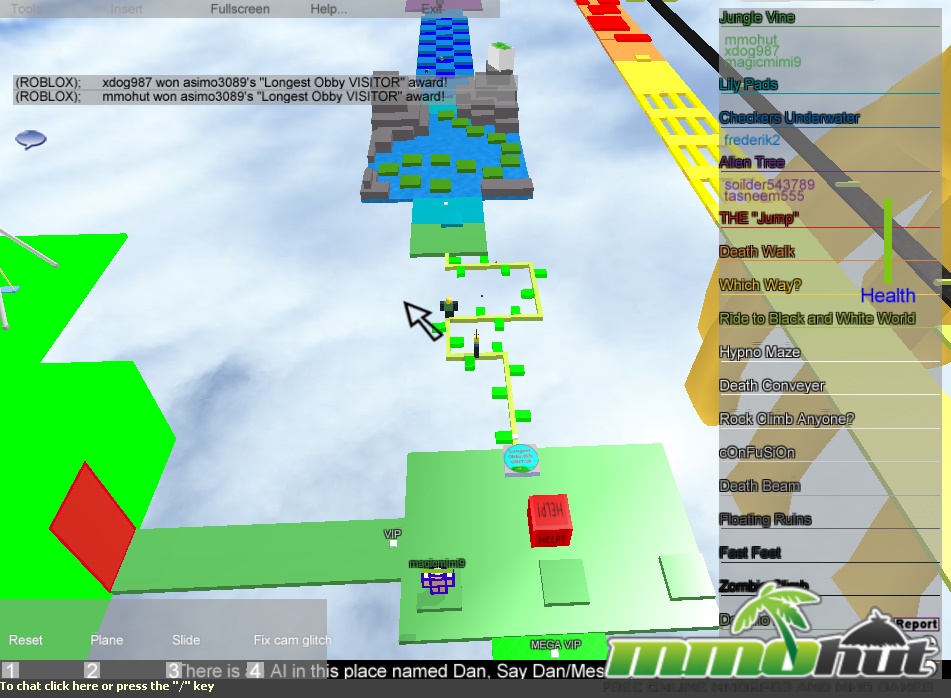 It doesn’t take much effort to play the games other users create. Most of the games currently available fall into a few basic categories like obstacle (obby) and arena. Obby games play like platformers and require players to walk over narrow ledges, jump from platform to platform, and eventually get to the end. Various games are labeled as ‘easy obby’ or ‘hard obby’, leaving players free to join the ones that fit their preference. Arena games work as massive frag fests where players must kill each other using various weapons. Common weapons include swords, bazookas, bombs, and slings. Respawn times are usually instant and players are free to come and go at any time. Some games are more elaborate such as ‘A Pirates Life’ which pits two bands of pirates against each other. Far from being a simple arena, this game allows players to fish, buy various items, purchase different sized ships, and generally progress through the game in RPG or at least action-adventure style. Roblox keeps track of what games are the most popular, most favorited, and even picks a few as ‘featured games.’ Other interesting games include a simulated Normandy Beach landing during WWII, mini-game rooms, and cafes where players simply hangout and chat.

After messing around in a few games, it is only natural to get a desire to try building something yourself. To get the creative process started, players simply visit the ‘Places’ tab on the top menu and click build. This will take players to their default place which is a large, mostly empty room with white flooring, a small house, and a depo of blocks. It is worth noting that the graphic style in Roblox is inspired by the popular Lego brand toys. Many of the pieces used to build places have the same shapes as common Lego pieces and even the character designs look similar. Game creation is definitely a difficult process. Roblox uses a simplified version of the scripting language called Lua which enables players to write custom programs for their places. There is a good chance that kids who invest the time in creating a functional game within Roblox will go on to master more advanced programming languages. For this reason, Roblox makes a great ‘sand-box’ MMO where players are given all the tools necessary to unleash their creativity. Those are interested in learning more about scripting in Lui can check out the Roblox Wiki which I’ve included in the Links section. 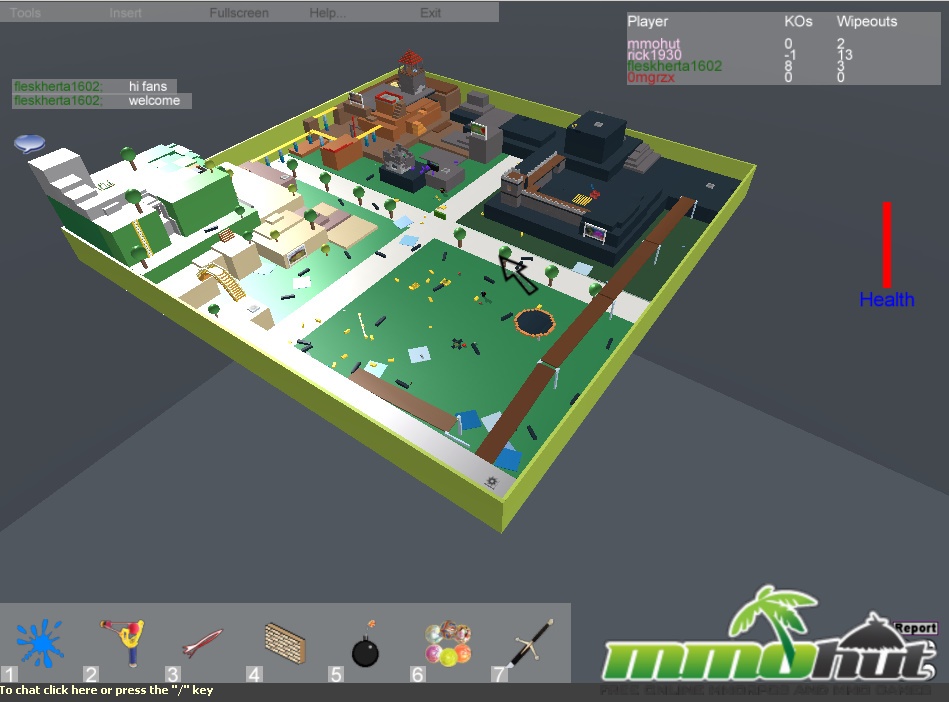 Or Just Fooling Around…

Less ambitious players need not despair. The place builder can still serve as a great virtual playground to simply tinker around in by building houses and other objects. Compared to the limited player-housing features available in similar browser games like Pixie Hollow, Roblox is in its own league. Players can literally create any kind of structure in any king of setting with any kind of furniture and have it serve as their home. The act of construction is simple enough, simply drag the blocks to their desired location then paint them any color available. Players can always save their current project and return to it later. The sheer scale of some of the top games should not deter users from experimenting with their own places and creating something personal.

Glitch in The System

Whether players are constructing their own world or participating in someone else’s, lag and stuttering visuals are a constant companion in Roblox. Even though the game has been available for several years now, it still has its fair share of glitches. Camera controls are similar to other MMORPGs; hold the right mouse button to pan the camera, use the wheel to zoom in and out. The trouble is that it is too easy to get lost with the controls. I accidently cloned my starting house on top of myself causing my camera to go wild. It took me a moment just to figure out what was going on at which time I promptly reset that action. Players can use the mouse or the arrow keys to move but the controls don’t auto-adjust when panning the camera which caused me to walk in and out of a room several times before getting the hang of it. The graphics themselves are not very impressive. Besides looking, well, blocky they could definitely use an update. How bothersome these issues are varies from person to person but Roblox is definitely a game that requires a healthy dose of imagination from its players to make up for these shortcomings. 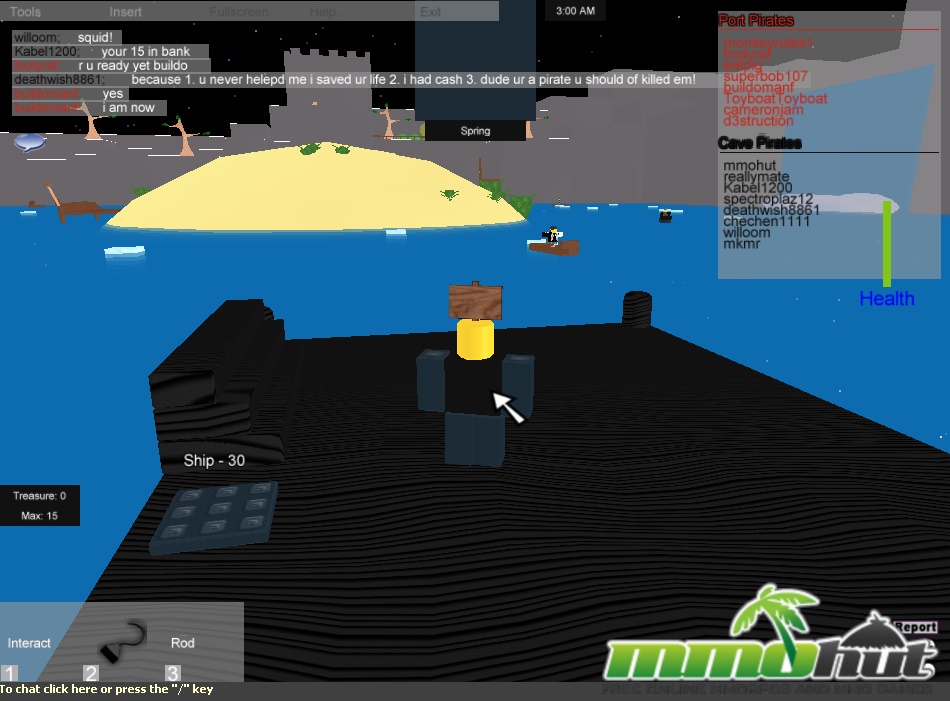 While Roblox is free to play, there are several subscription options which grant players additional benefits. A basic account can enter all public games, make friends, and join groups but is restricted in several important ways. Most importantly, free players can only create a single space while subscribers can have multiple, allowing them to work on and save multiple projects. Subscribers also receive a daily Robux stipend. Robux are the game’s main currency and is used to purchase gear created by other players such as shirts, hats, pants, and other items. Less importantly, paying players can create groups and badges (achievements) for their games. Strangely, Roblox has a two tier subscription system. To join the ‘Builders Club’ players must pay $5.95 a month or $199.99 for a life-time membership. More dedicated players can spend $11.95 a month or a lump sum of $299.99 to upgrade their accounts to ‘Turbo Builders Club.’ Paying for several months in advance (6 or 12) yields a small discount for both tiers. Additionally, an in-game Central Bank allows users to purchase Robux with real cash. Even with so many ways to pay, it is not required to spend a penny to enjoy Roblox. Anyone looking for a virtual box of Legos should give the game a try.

Roblox is an open ended, sand-box MMO that gives players all the freedom they could ask for. The mini-games, social hangouts, and even the clothes user wear are created almost entirely by the community itself. The simple graphics make the game safe for all audiences but, combined with lag issues, they may test some players’ patience.