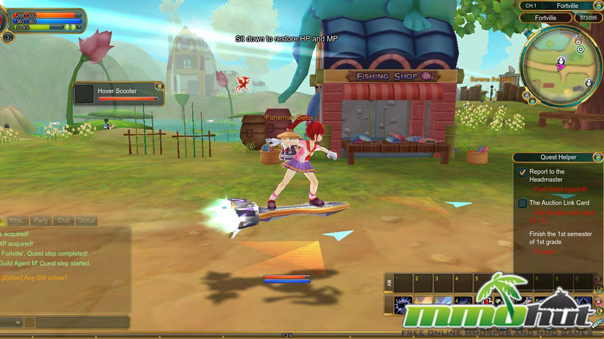 Remnant Knights is a 3D fantasy MMORPG where players become pupils studying the combat techniques and chivalry of a knight. On their journey towards knighthood young students must complete various challenges and pass difficult tests to prove their worthiness as a hero. Kill thousands of fiendish creatures from Trash Sprites to Evil Totems. Participate in duels to showcase newly mastered skills or join your school’s team in an intense arena battle. Form a club with fellow classmates and compete with other leagues for top rank. Adopt a pet companion to help out during brawls. As players progress they can make the campus their home by moving into one of the dorms. Add decorations, host parties, or simply hangout.

Most of the gameplay involves tackling quests. Players start out in the main campus accepting assignments or missions from different NPCs. Like most RPGs tasks require students to kill monsters, collect materials, retrieve items, or relay messages. There’s a nice variety of Skalari creatures to slaughter. Face off with menacing Country Onions, Aguilers, Meeps, Poison Moths, Half Hatched Eggs, and some dangerous Maple Trees. The combat in Remnant Knights is fast-paced. Once an enemy has been targeted players can perform skills or special moves depending on their class. Propel electrifying bolts of energy, freeze, ignite, hammer, and even shoot pesky monsters with explosive grenade launchers. Guns which are rarely seen in fantasy MMOs are loads of fun in this game. Although the skill progression is extremely slow giving students only a few skills to execute during combat the weaponry more than makes up for it. The anime-style graphics is rather unique also depicting a colorful but not too cutesy world to explore. Players have the option of using the traditional WASD keys or the convenient point and click method for movement.

Somewhat similar to RAN Online there’s a subtle school theme integrated throughout the game. Players report daily to the School Director to mark their attendance. The NPCs stationed around campus are instructors. Receive tasks from PE Teacher Myles or Art Teacher Ann. Levels are also grouped into grades and feature a semester status. All players begin in the 1st grade until level 10 is reached and then they’re promoted to a 2nd grade major. Quests increase in difficulty as students advance. Missions that appear as tests require students to clear a specific building or cave area in order to attain a hidden object. They usually have multiple modes of difficulty to choose from allowing players to repeat them for additional XP. Heroes receive a large sum of experience or a reward box containing random items for completing quests. At any time players can challenge another student in a duel. 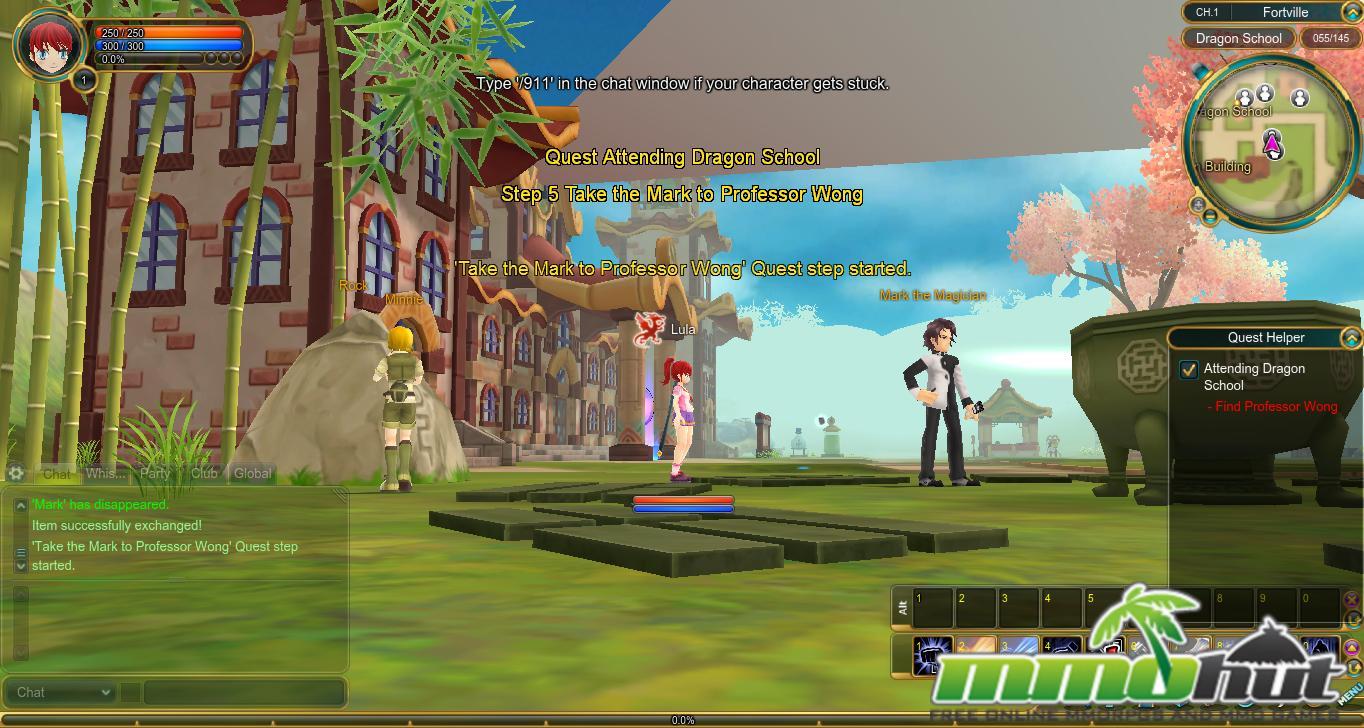 Duels and arena battles are another major part of the gameplay in Remnant Knights. When players feel like fighting to the death they can simply click on another player passing by to initiate a duel or competition. If the other student accepts the request a short countdown begins and then it’s a showdown. Duels are relatively short but are great for a quick thrill. In arena battles knights are transported into a secluded area for a more structured scrimmage. Heroes have the option of waging war in 1 vs 1, 3 vs 3, or 5 vs 5 matches. Identical to PvP competitions knights spar until their opponent is defeated. Marble Battles are slightly different than others arena skirmishes. Players are automatically divided into factions according to their school affiliation with 10 players or more residing on each team. It’s always the Dragon versus the Owl Academy in this arena venue. Once the game begins knights are immediately teleported to the designated area. There are five control points called Authenticators scattered throughout the zone. The objective is to seize and hold these stations until the match ends. Every battle lasts 20 minutes. The team that controlled the most Authenticators wins. It’s a player killing free-for-all in this intense capture the flag type matches. In Club Wars parties fight for reign over various territories in Kasmari. This event is scheduled weekly and allows any ranking club to participate. It plays similar to the Marble Battles but instead of an Authenticator a computer terminal serves as the desired control points. The game also features Personal Battles in which beginner, amateur, and professional status knights can enter a special timed zone to kill as many Skalari as possible. This PvE competition gives players a wide variety of combat options to delve into. 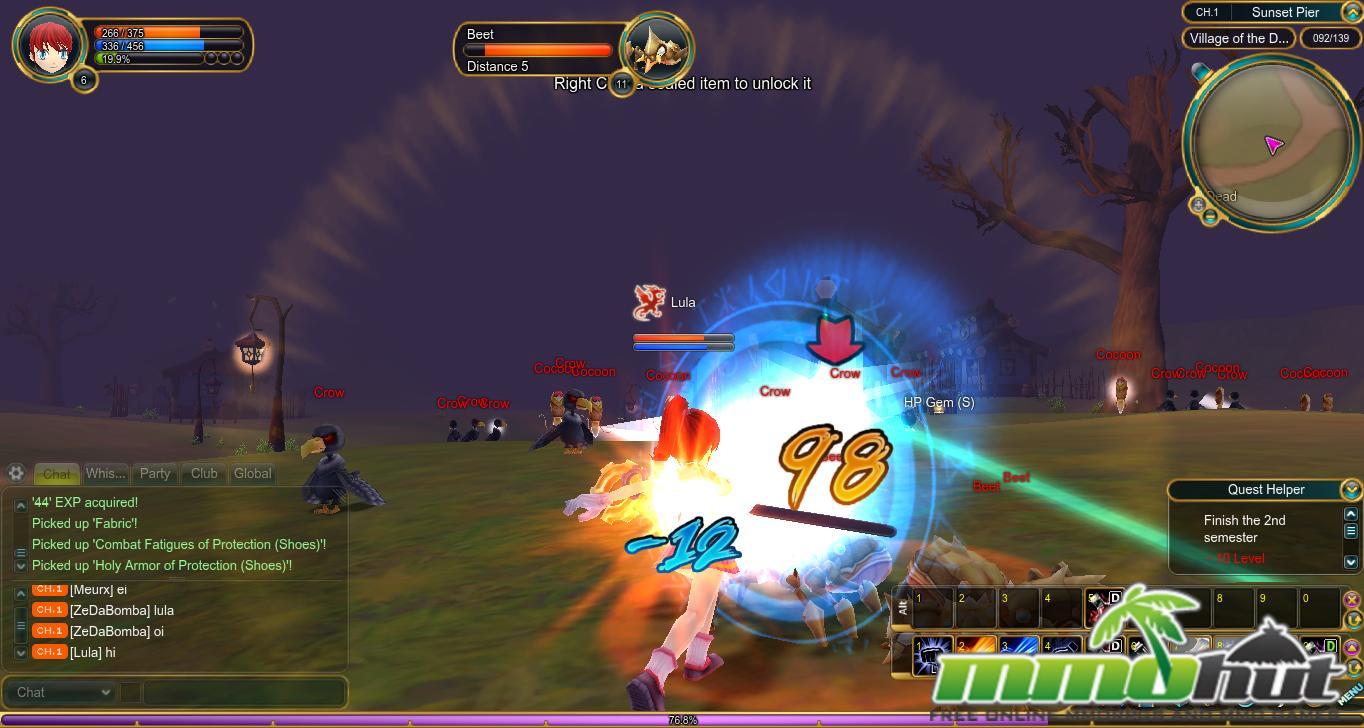 Sticking to the school theme there’s a player housing feature in the form of dormitories. Each knight once they reach level 15 can apply for a dorm room. Dorm rooms are a personal haven for students to retreat and socialize. Make a room private or public allowing random visitors to stop by. Decorate and re-arrange furniture. Hold club meetings, chat one-on-one, or host a party. Players can really have fun using various dance emotions or expressions to interact with others. It also adds a Sims feel to the gameplay. Similar to Eden Eternal heroes can adopt pets. The furry companions in this game are extremely cute and serve multiple purposes. Adorable puppies, kittens, penguins, owls, parrots, or pandas can be taught various skills to assist in battles. Feed treats to them purchased from NPC shops in order to keep their health levels up. Pets in general are always a nice bonus especially when they have their own space. Players with dorm rooms can set up a special corner for their four or two legged pals and decorate.

Knights can also send messages to their classmates or go fishing. The mail system is slightly complicated. Instead of instantly sending messages to players on your friend list knights have to find a mail box stationed in the town. Then compose the letter and pay the mandatory fee in order to send it. If the recipient doesn’t check his mail within a certain time period the letter is sent back and the entire process must be repeated. Although it’s meant to simulate a true-to-life postal service it becomes tedious and expensive for users who want to send private offline messages to multiple pals. Fishing can be performed at any body of water within the land of Kasmari by equipping a character with a fishing rod and bait. Fishing operates almost like a mini-game. A timed meter appears once the fish bites and players have to click or use their auto-attack to reel it in. If the bar reaches zero the catch is lost. The trout in this game is surprisingly strong making fishing a challenging sport. Sometimes the catch isn’t a fish but a discarded item that can be traded or sold at one of the local NPC shops. 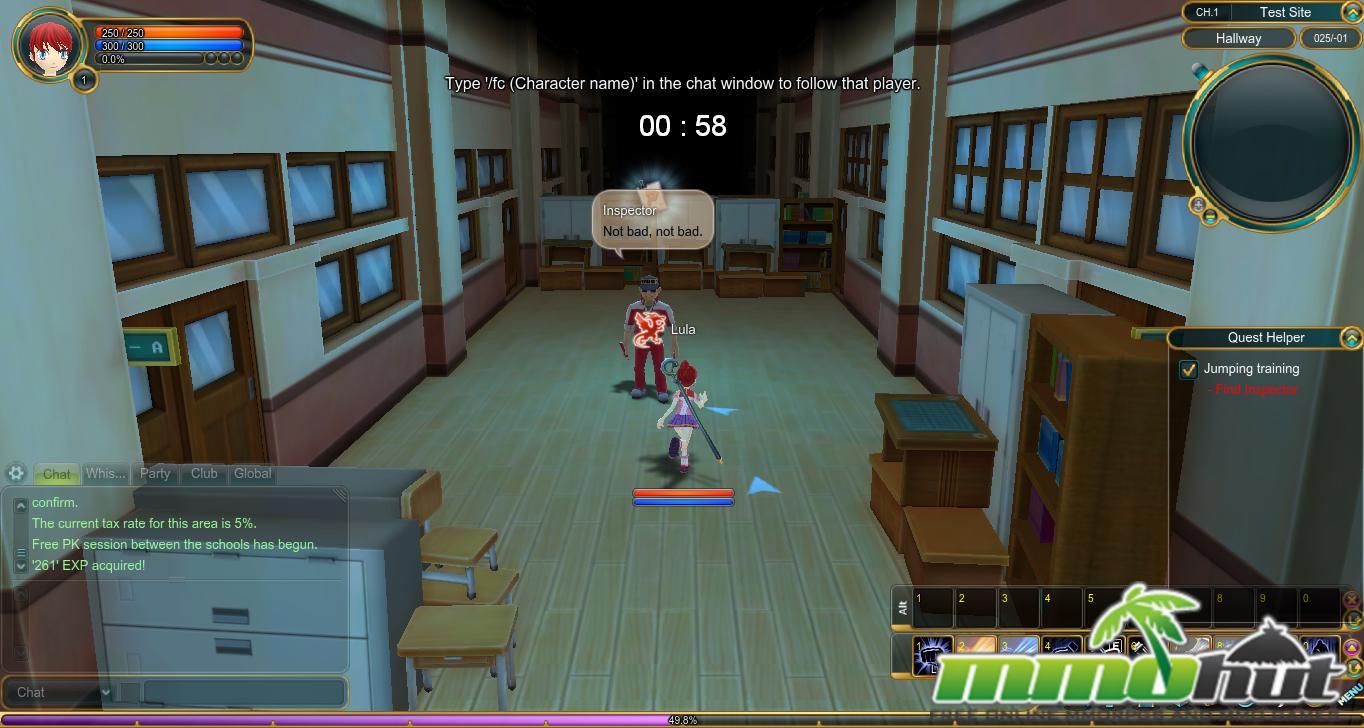 The selection of items in the NPC shops is limited. Shops are primarily for restocking on health potions, School Return Cards, or Certification CDs for participation in arena battles. Players receive the majority of their gadgets and armor through monster drops, quests, or as rewards for leveling. The amount of character customization is decent. Players are able to dress their knight in elaborate costumes or casual gear like jeans and a white top. Most of the outfits can be earned through questing or purchased in the official item mall along with a few other rare accessories. Crafting is another option but it’s restricted in terms of variety. Students are able to craft generic looking capes, potions, and enhance equipment. Based on a knight’s class various weapons are available. Equip heroes with the Redforce Launcher, Priest Staff of Eternity, Viper Dualgun, Rocket Punch Hammer, Claw of Imprecation, Ancient Magic Wand, Priest Staff of Guardian, and the 100t Hammer. The mounts are very cool like the game Grand Fantasia there’s a wide assortment available if players are willing to spend a little extra cash in the Samba Shop for a permanent ride. Buy Synergen Jets, Marble Bikes, Warrwulfs, Battle Hogs, and even Baby Milk Calfs.

Remnant Knights is a solid fantasy MMORPG that features an engaging storyline written by DC Comics legend Jim Krueger. Players will find themselves transported into the distant realm of Kasmari fighting off troublesome aliens and saving mankind. This game has a competitive PvP combat system, powerful guns, and mesmerizing spells. Participate in fierce Club Wars or large scaled Arena Battles to earn top rank. The social aspects are nicely integrated into the player housing feature allowing knights to decorate their own dorm rooms and adopt cute pet companions. Comparable to Eden Eternal, Grand Fantasia, and RAN Online this is a unique adventure that anime-style MMO fans will definitely enjoy.