Pirates of the Caribbean Online Review 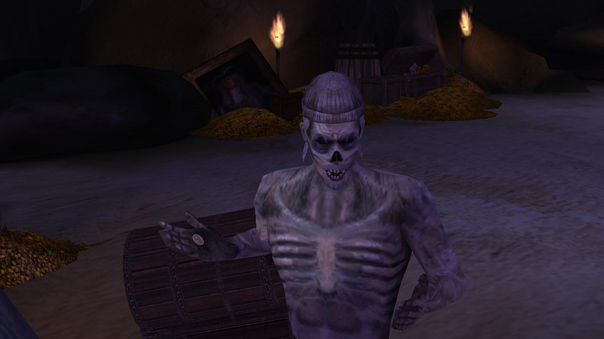 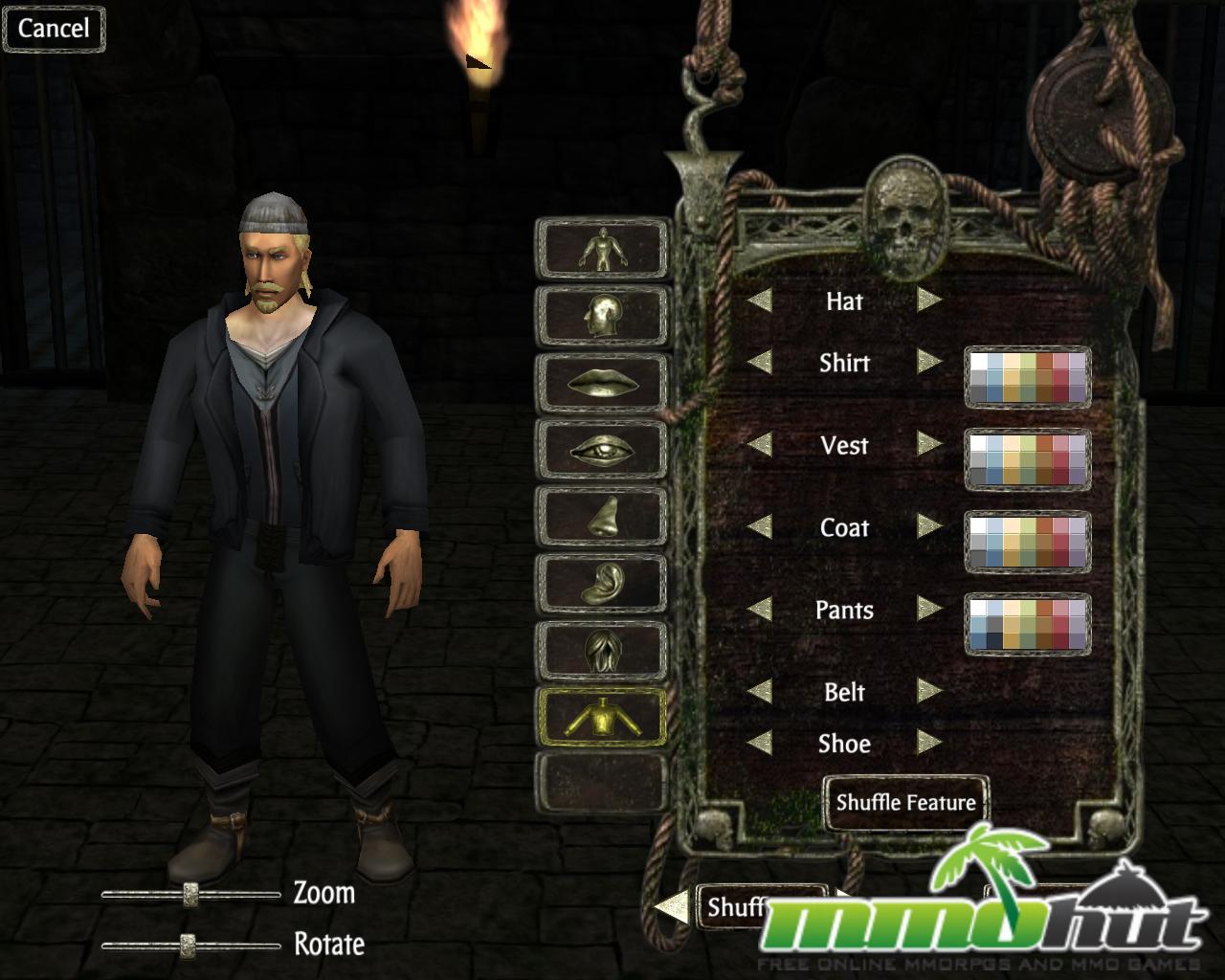 A Pirate’s Life for Me!

The Pirates Online client utilizes a download-as-you-play approach which means the initial download and install process is quick but it takes a minute or so to load a new zone the first time players visit it. All Disney sites share a universal registration so if you already have an account with a different Disney game, you won’t need to register again. Similarly, your Pirates registration can be used throughout Disney’s web portals. Like other Disney MMORPGs, Pirates is primarily subscription based but allows players to get a taste of the game for free. Free, or basic, membership has no time limit but does come with a host of drawbacks. To start off, basic members can only create a single character but this shouldn’t be much of a problem since there are no classes or races in Pirates Online. The game uses skill based progression which means players will increase in rank with the weapons they use. Character creation is an in depth process with at least a dozen sliders for things like ear size, nose width, chin size, eye depth, and so on. Multiple body types and hair styles are also available including several color palettes for hair and apparel. 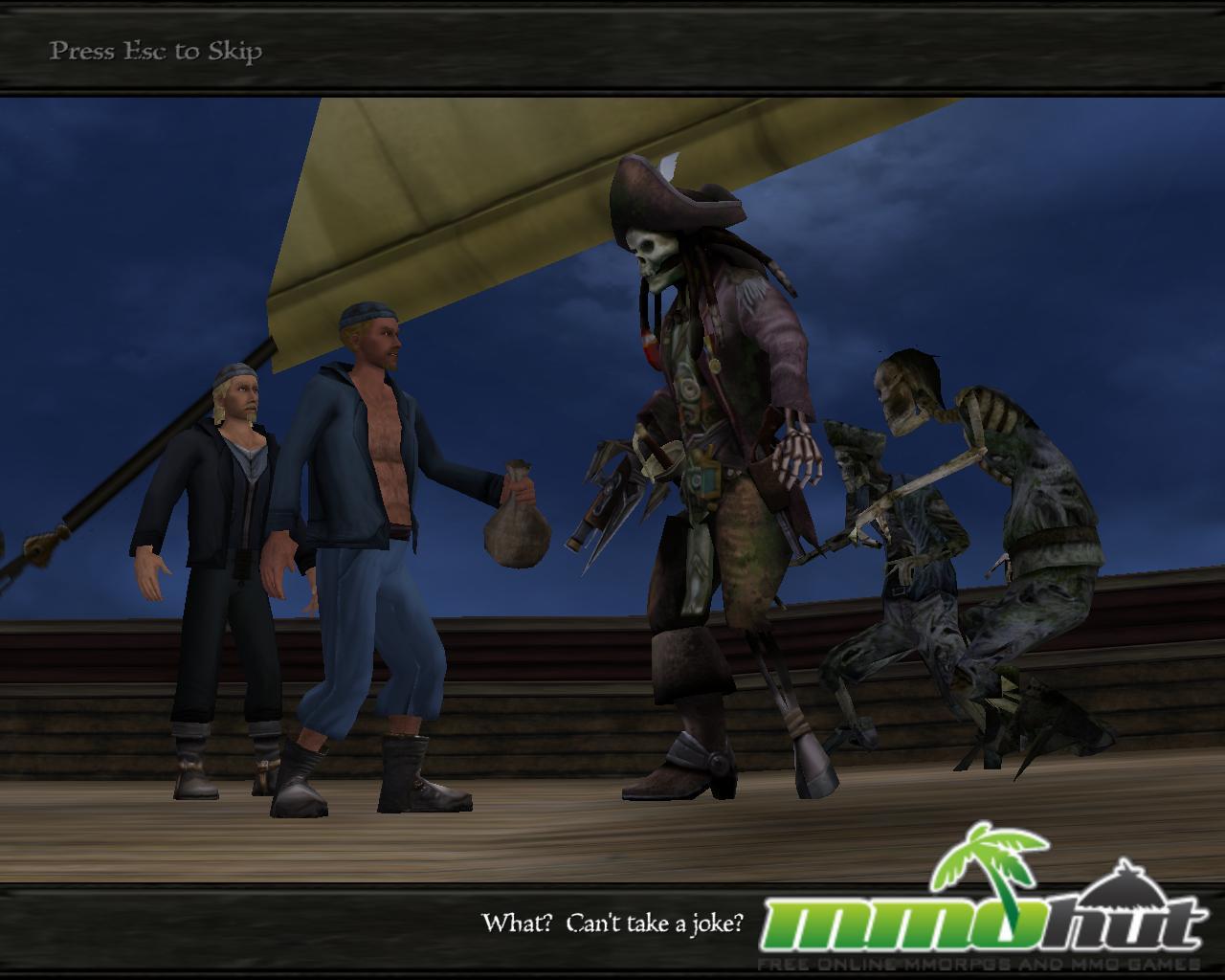 Pirates Online is among the few MMORPGs to make use of in game cinematics. While common in other genres, especially single player RPGs, cutscenes never took off in online games. Right from the start players are greeted by the infamous Captain Jack Sparrow who helps them escape from prison. There is a short optional tutorial that I suggest players go through if only for the story elements involving William Turner and Davy Jones. The graphics in the game are cartoony and while not technically impressive, they do a decent job at flashing out the environment. My only problem with the visuals is the somewhat goofy attack and jump animations but for a family oriented game they’re excusable. Movement is done through the W,A,S,D keys which I almost always prefer to point and click method. Space bar jumps and the function keys (F1, F2, etc) quickly switch between weapons. The left mouse button serves as your weapon trigger while holding down the right button allows you to pan the camera. The tutorial does a good job of explaining all this and even ends with a thrilling naval battle pitting players against an undead vessel. 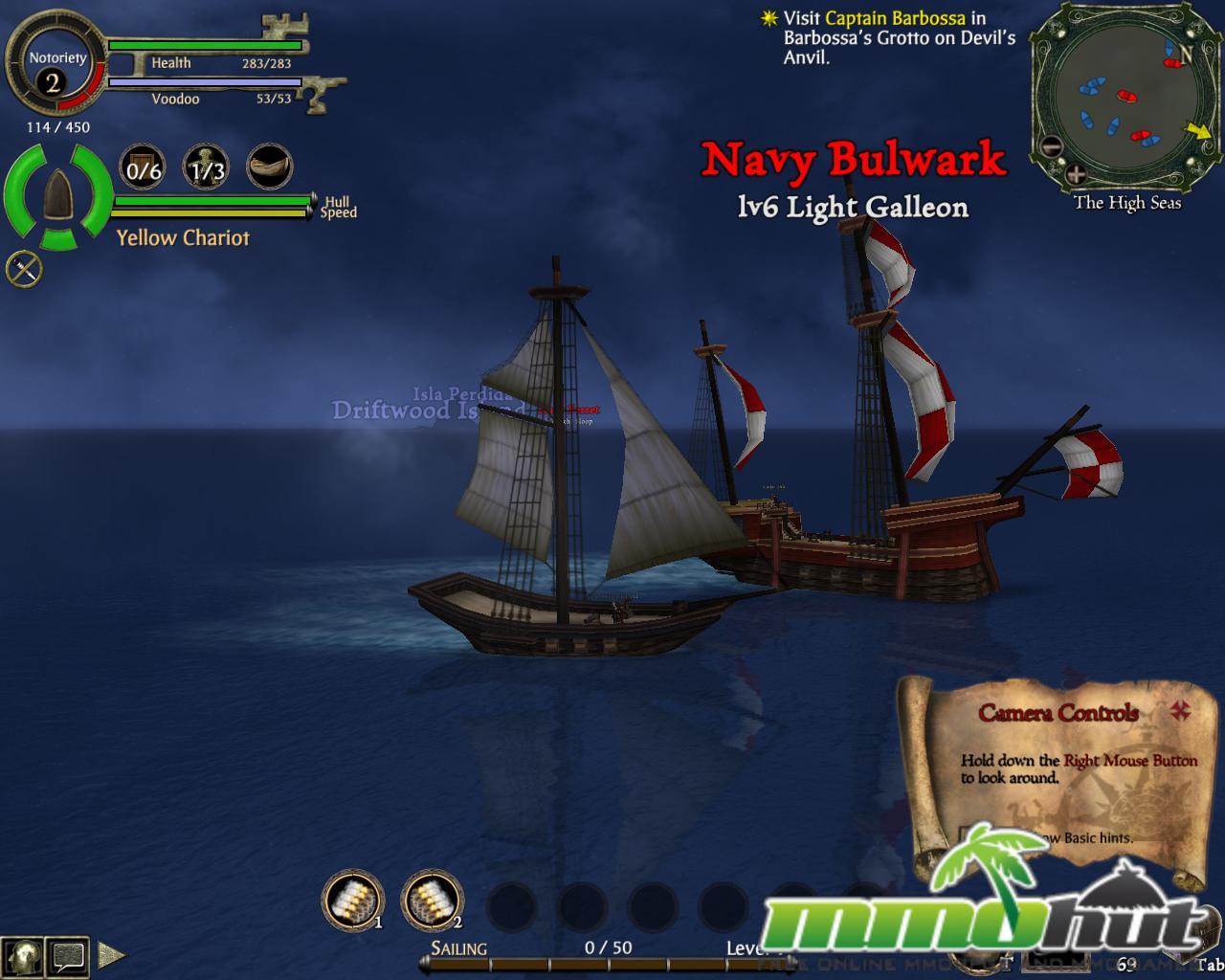 After the tutorial, players arrive at Port Royal and continue to meet key characters from the movies to learn the basics. A bright yellow arrow on the mini map will always guide players towards their next destination. This is very useful but kept the game a bit too linear for the first half hour. Eventually, players will acquire their first ship, a light sloop and set sail. The game world in Pirates of the Caribbean Online is composed of a series of islands separated by expanses of ocean. While at sea, players control their vessels the same was on land but rather than using swords or pistols in combat, they can fire left or right broadsides against NPC ships. To take manual control of the cannon, players must press escape to let go of the wheel and shift to take control of the cannon. Manual cannon controls are much more effective against the generally stupid AI so the best strategy is simply to sail in as close as possible, let off a single broadside than make for the manual cannon controls. 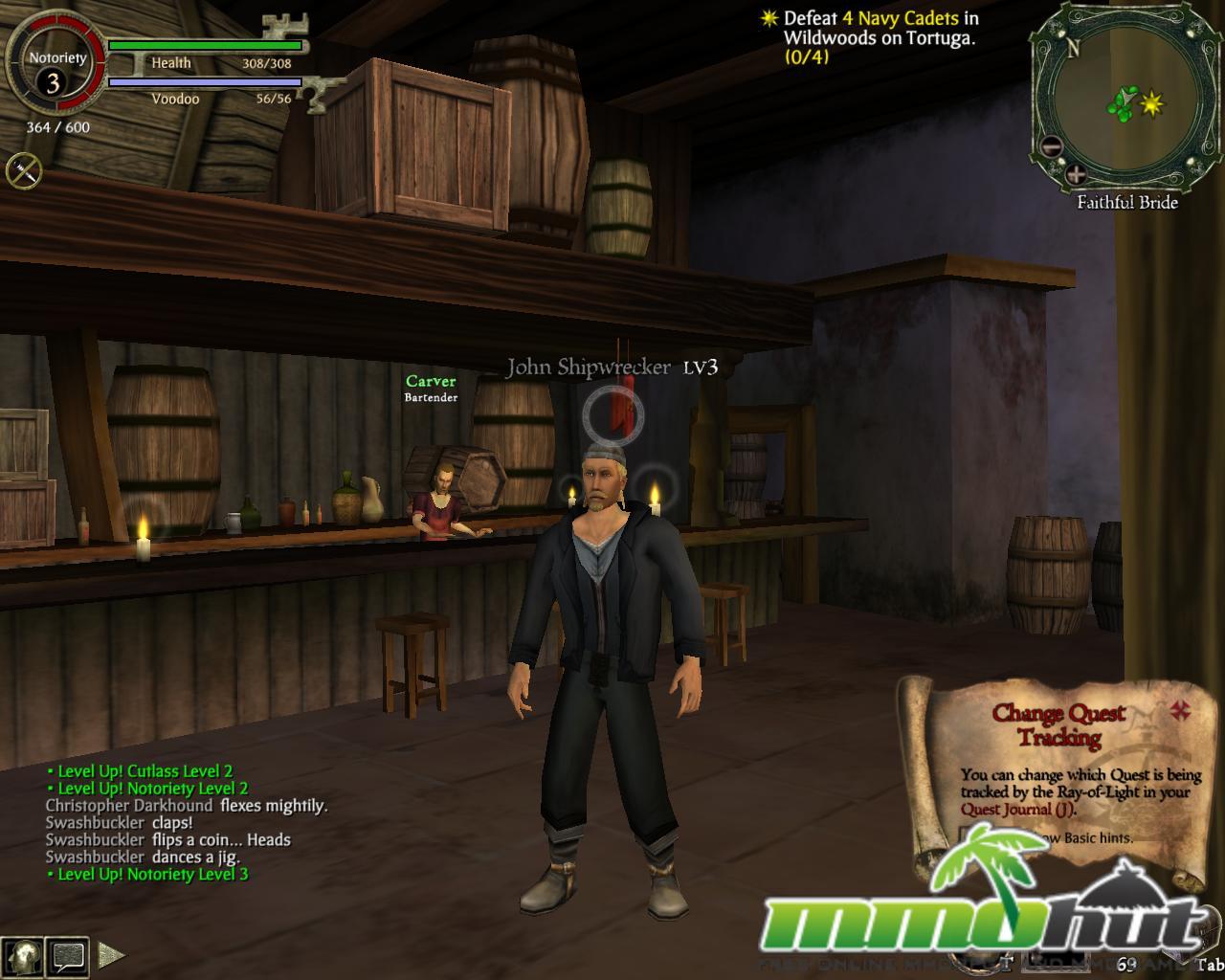 Pirates Online will never leave players rudderless, every quest completed introduces a new one and the only way to progress the story is to complete these tasks. While it is possible to simple grind it out and disregard your assigned tasks, it serves little purpose since quests reward heaps of bonus experience. During the early stages it is quite possible to raise your notoriety level (base level) simply by completing a series of talk quests which take players from one NPC to the next and back again. Leveling up increases both your maximum health and voodoo, which is the term for ‘mana’ in-game. There are six weapons available in Pirates Online and ranking up in each grants skill points which can be used to learn new abilities associated with that weapon. The cutlass is the first weapon players receive during the tutorial and the pistol is later handed over by Barbossa who also explains the game’s PvP element to players. By default players cannot attack one another as it is forbidden by ‘the code’ but cursed pirates are bound by no code. A ring which, if equipped, turns players into undead pirates serves as the game’s unique PvP flag concept. All players who have equipped the ring may attack one another freely but are still unable to attack living pirates. 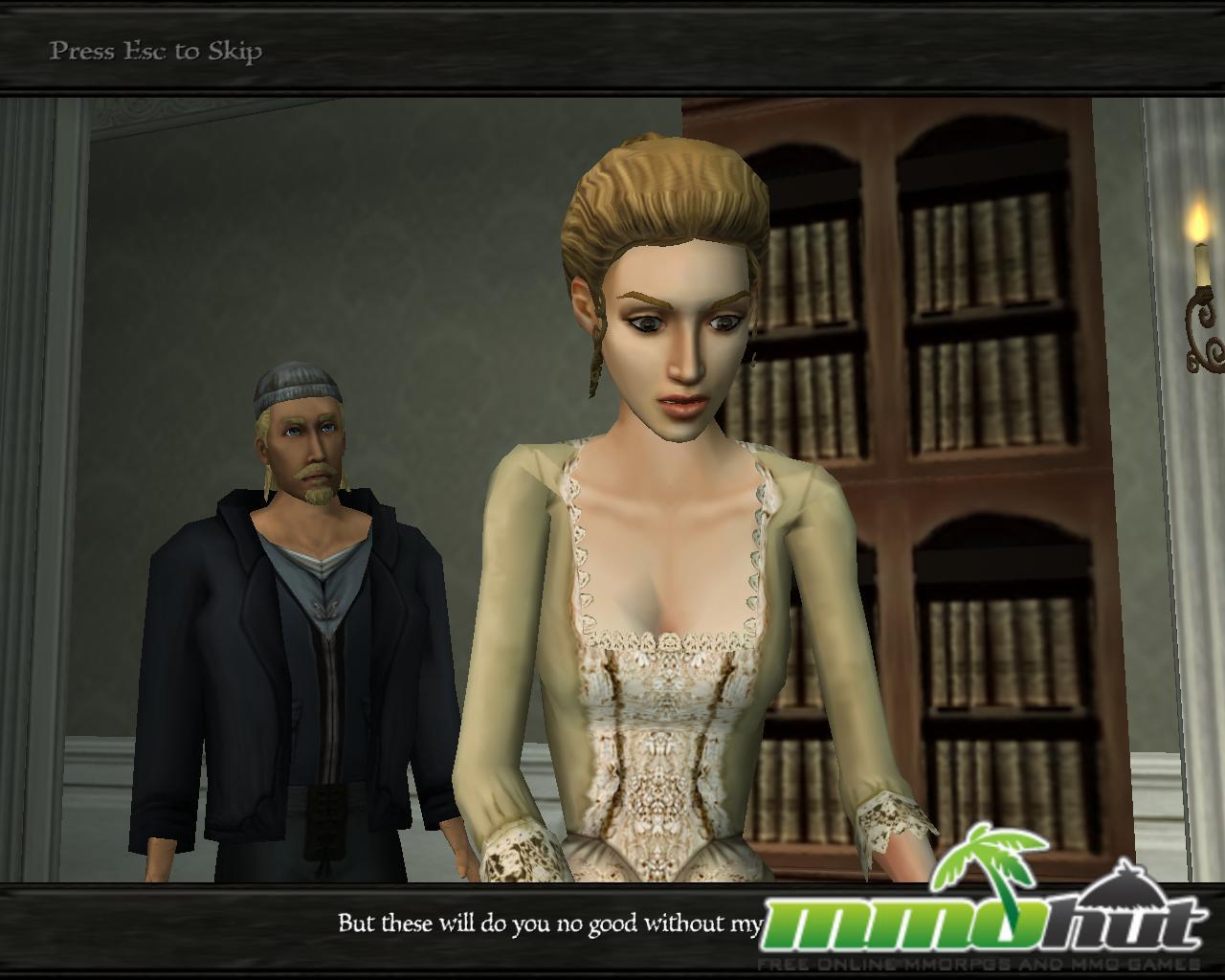 A Night at the Pub

No pirate game would be complete without a seedy bar and a gambling room and this front Pirates Online doesn’t disappoint. Despite being a kid-friendly Disney game, Pirates of the Caribbean allows players to gamble their in-game gold against one another in Texas Hold’em or against the house in Blackjack. Eventually, basic account holders will run up against a brick wall and be unable to progress further without paying for a premium account. All of the game’s boss battles are restricted to basic members as are mid and heavy tier ships. Many of the paltry 6 weapon types are also inaccessible to free players. Additionally, several of the islands that make up the world can only be explored by subscribers. Other restrictions like the inability to form a guild are barely noticeable since players can still join guilds founded by others. Pirates of the Caribbean Online has a tease of a pricing structure with the first month offered at $4.95 but additional months prices at $9.95. Of course slight discounts are offered for 6 and 12 month game time blocks. If you’re a fan of the movies or Disney’s other MMORPGs than be sure to give Pirates Online a try, the free trial content is more than enough to get a feel for the game and decide if it’s right for you.

Pirates of the Caribbean Online allows fans of the franchise to explore the locations and interact with the characters from the trilogy. The visuals and gameplay are both unique enough to earn Pirates Online a solid recommendation for anyone looking for a casual, family friend MMORPG. Basic (free) players can enjoy this game for many hours but a premium account is required to experience much of the end game content.