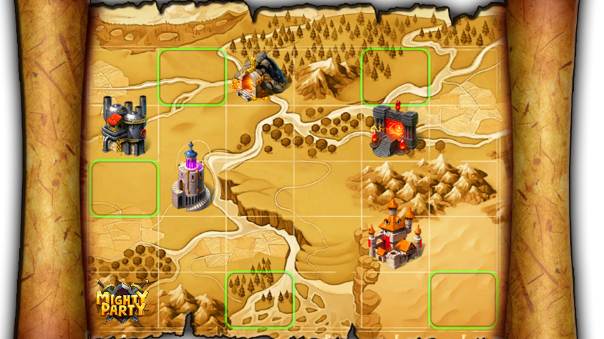 Good news, Mighty Party fans! The Guild Wars update is here, and from now on, you can do battle with other guilds, face-to-face! Who has the strongest alliance of guildmates? Channel your inner Sima Yi and show off your tactical genius! A Guild Shop allows for an evolutionary tree of various bonuses, where Guild Masters and Officers can unlock/upgrade bonuses for Influence, and where guild members can buy temporary boosts for themselves! Turf Wars is a new feature where guilds can do battle with another for valuable territories. All guilds are divided into rooms depending on their rank, first-time based on the current rating (Fame of the guild members). In all times beyond that, it’s based on the Turf Wars results. The battle system is as follows: