From the moment I played SMITE for the first time, I had a feeling that it would definitely lend itself well to the console type with how action oriented it is. So I was glad to sit down on a console and play this title! The game is basically the exact same, but for now there are only bots to play against. Before too long, players in the beta will be able to oppose one another, but or now you have bot matches to tend to. It was also my extreme pleasure to play with high ranking Hi-Rez officials and not do terrible! I grabbed my favorite God (Hades!) and went with their default control scheme. There are several different button figurations for all kinds of players, but I liked being able to tap a face button (X Y B A), move the ability with the right stick and hit the button again to activate it, or simply double tap if you are at the desired range already. 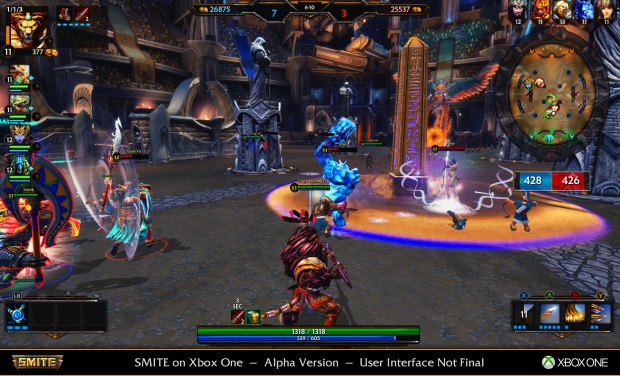 The controls for SMITE on console are incredibly responsive! I did not feel input lag at all; I had the chance to play bot arena, and it felt just like I was playing on my personal computer, right down to Freya and Artemis stealing my pentakill. There should be some gameplay footage covered along with this, and an interview where DizzyPW got the chance to discuss the title while I mashed bots into custard. This is an exciting move for Hi-Rez though I have learned that there will not be crossplay with PC. But fear not! If you think that you will be losing your progress and be forced to start over, you will be allowed a one-time clone of your account that will copy your progress from the PC to the Xbox One, but everything after that you will have to earn on one or the other. I would rather them be permanently linked, but I can understand why that is not possible. 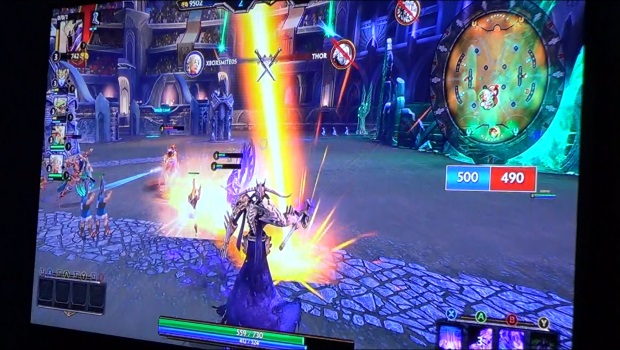 Though they did not disclose anything about a potential Sony release, I’m holding out hope that they would be unwise to overlook the Playstation Four fanbase! I’m still confident that later this year we can get some kind of reveal; maybe the Microsoft is the test community! Here’s hoping! Regardless, the opportunity to play SMITE via console was exceptional, and I found that it was just as intense as it was on the PC. I really am excited for this move, as I am sure there are a huge amount of players who are on the Xbox who have not tried it but perhaps have wanted to, will now have their chance!

Heads up SMITE fans, subscribe to MMOHuts’ Youtube channel for a massive giveaway announcement later this week, including tons of Xbox Beta keys, even more Convention Tyr skins, and one lucky grand prize winner will walk away with an Ultimate God Pack!