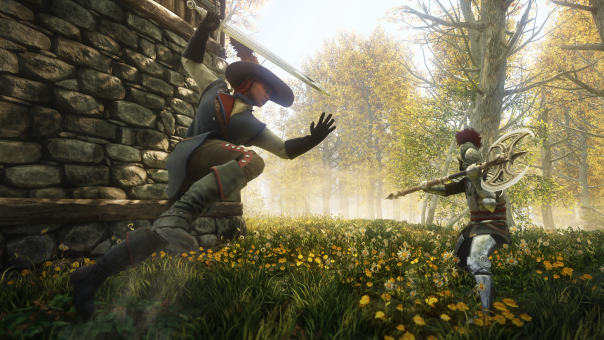 Last month, Jason had the opportunity to sit down and chat with some of the heads of Amazon Game Studios. The focus of discussion was their upcoming MMORPG, New World. He spoke to Patrick Gilmore (Studio Head), Scot Lane (Game Director), and Rich Lawrence (Executive Producer).

PG: New World was inspired by a number of things, including a conversation about famous unsolved mysteries—things like Jack the Ripper, Area 51, and the Voynich Manuscript. As we dug into stories like these, we learned about phantom islands, including an island called Antillia that appears on 16th-century maps.

We loved the idea of a newly discovered world, crude technology that could progress over time, and a frontier where there would always be something new to discover. And as we started delving into these ideas, we started asking ourselves what it would look like to have a game not made up of just small parties, but whole armies, where players could not only just get by, but build up new civilizations.

New World is set in an arcane 17th-century world, but does it have any ties to Earth’s 17th century other than the technology?

PG: New World exists in an alternate world, on a mysterious continent called Aeternum. We did pay a lot of attention to the level of technology and cultural attitudes of the real 17th century, using it as a guide to decide which types of weapon and even music we include in the game. We loved the idea that this era was the last gasp of the blade and first breath of the gun—which meant we could include a combination of hand-to-hand and ranged combat. I think incorporating an authentic historical period helps give the world an eerie, desperate tone. When you arrive in New World, we want you to feel the promise of a new civilization, but also the anxiety of a haunted, unknown place where you’re without a safety net.

How far has development come? On that note, are there any major changes or gameplay features you’d like to discuss?

PG: Right now, we’re in alpha testing, and we’re learning a lot from our players. So far, they’re telling us that they really like the concept and core focus of the game, including PvP, direct combat, gear-based play styles, and a big, lush, mysterious world. A lot of the work we’re doing right now is fine-tuning things like the availability of mats, drop tables, XP values, item costs, damage values, and respawn rates.

A large part of New World appears to be the exploration of the unknown, and pursuing an unknown frontier. Will players or guilds be able to control land masses, and if so, how will that work?

SL: Yes they will. Companies can claim territories throughout New World by finding an open claim, purchasing a claim charter and supplying the required resources to take ownership. Owning territories gives Companies access to higher tiered crafting stations that allow them to craft higher quality weapons and gear. This advantage comes with a price as others will want to benefit. Once the land is owned, the challenge will be building, fortifying and holding the territory.

In order to succeed, resources and industry are necessary to craft powerful weapons and bases. How will crafting work in New World?

SL: Just like in real life, it takes not just soldiers, but industry to win a war and sustain dominion. So crafting plays a huge part in New World. The vast majority of items in the game are player-crafted. New World has a skill point system, where players can specialize in crafting, harvesting, or survival skills as they level. A player who pursues crafting can choose to become a Blacksmith, Outfitter, Engineer, Alchemist or Cook, and as their skill increases they can create higher-quality items with better stats.

New World’s economy is entirely player-driven, and skilled artisans will be able to sell their goods to players who have chosen to specialize in other things. It seems like a serious emphasis has been put on working in a guild and working together. Are there options for players who want to work alone?

RL: We’re thinking a lot about this, and exploring features that would make it possible for small groups or individuals to contribute to the larger territory control wars constantly happening, either by directly participating or providing support. We’ll have more on that soon.

On that note, is New World a PVP only game, or will players who simply want to explore and make money be able to do that?

RL: We believe New World is a PvP game at its heart, and large-scale combat is one of the features we’re really focusing on. That being said, we do have areas that are non-PvP, and we’ll listen to the players for guidance on how far we extend that idea. Because New World is a sandbox, you have a lot of choice in how you play the game, and things, like becoming a skilled artisan or supplying valuable resources to combat forces, are options for players who want to focus on PvE.

Was your team inspired by other titles in the past from this genre? (Uncharted Waters, et cetera)

SL: There are lots of great games that have inspired us in different ways, but ultimately we just set out to make a Sandbox MMO game and picked features we felt were appropriate and fun. I think playing our game you will see that we have been influenced by several games in the survival crafting genre, some action combat games, and even some elements from theme park MMOs.