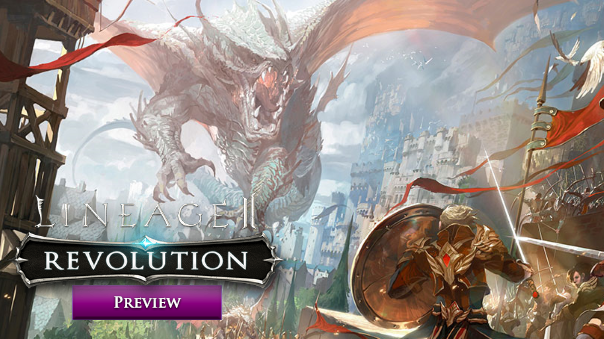 This is my first foray into the Lineage series of games, but not my first mobile MMO. One of the questions I’m asked often is “What is the appeal”? Most of these MMOs offer auto-play, where it takes you to your quest objective and fights for you. Unlike some other mobile MMOs though, you at least have to click on the actual quest, and it will take you where you need to go. I’d argue that the auto-play is a part of the appeal. In games like this, the appeal is in being able to min-max and make your character as strong as humanly possible, where they can just obliterate any other player or enemy that comes along. It’s spending time doing these quests and admiring how beautiful the game is (because let’s be honest, this game IS gorgeous), and for the higher level content, one would argue that auto-pilot is a detriment. I’ve already challenged some of the Elite Dungeons, and some of the higher floors of the Tower of Insolence definitely are challenging.

Lineage 2: Revolution takes place in a war-torn land, and players are fighting to get the land back to a time of peace and security. There are lots of Necromancers, Orcs, and other vile things to do battle with. You have three character classes and four races, but unlike some of the previous titles, you can mix-and-match, picking whichever race/class combination you’d like. The races each have their own stats they specialize in and a backstory, but ultimately, pick which you would care to play. The races are gender locked though. You have Humans, Elves, Dark Elves and Dwarves. “Dwarf” is kind of misleading though. They aren’t traditional Western Fantasy Dwarves. These are adorable loli-girls like you might find in anime. There are three classes, and at level 31 you can swap to a Prestige class. Warriors can become Guardians or Slayers, Rogues can become Scavengers or War Rangers, and Mystics either become Battle Mage or Sage. Each class is fun in its own way, but personally, I’ve had the most fun with Mystic.

Combat's pretty fast and furious. You can auto-attack, but you shouldn't always.

One of the definitely appealing things about Lineage 2: Revolution is the number of things there are to do. The entire first episode is basically spent doing tutorial stuff, introducing many of the activities you can do in the game, including upgrading gear, the PVP Arena, Dungeons, the Tower of Insolence, the Rune System, and more. A fair amount of episode 2 continues this tutorial trend, teaching you how to play the game at a nice, slow pace. Introducing new content every so often and teaching you how to utilize it is pretty nice, as you don’t get overloaded with a barrage of information. The tutorials are easy to understand and aren’t riddled with broken English that I’m so used to seeing in mobile games. Stats are also so important in this game, and there are so many different ways to gain bonus stats. From your gear, you can also PVP, and each PVP rank gives you bonus stats. Leveling also gives you overall greatest stats, and finally, there’s the Rune System, which also modifies your stats.

On the topic of “things to do”: there’s 50 vs. 50 PVP, and there’s single player PVP where two players do battle in an Arena. You can join a Guild (it’s pretty easy to find one) and do Guild-Specific content. I have seen quite a few players with Combat Power (how strong you are) well over 200,000. My CP is decent for my level, sitting around 18,000. There are dungeons and more content outside of the main story that unlocks throughout episode 6, so there’s tons of stuff to do. Tower of Insolence is a dungeon where you climb floor after floor, each with its own recommended Power Rating, where you fight waves of enemies, followed by a boss. Every so often it turns into a Boss Rush though, where you fight bosses you’ve previously done battle with. The Daily Dungeon is a one-on-one affair against a giant monster, and the Elite Dungeons are where powerful monsters lie and so do valuable rewards and experience. Those should not be undertaken alone. I couldn’t find a party for those, but it’s still early in the game’s life. There is an absolute slew of things to do, some of it only a few times a day, some less. For example in the Arena, you can do battle x number of times a day, and after that, you can spend Red Diamonds to keep going, if you’re close to gaining a new rank/more stats. After a while, you can’t even do that and it will lock you out for the day. That I’m grateful for at least, so people who are ahead can’t just get more ahead by burning money on it.

Runes are definitely useful. The grind is a little rough, but they're worth it.

In order to use the Rune System, you need Rune Fragments as well as Gold. Gold is easy to get, and I had no problem affording anything in the game that uses it. You can let the game pick runes for you, which at the start is probably not a bad idea to see what ideal stats you should have, but I’m sure there will be guides aplenty to better steer you. You can adjust your Phys/Magic attack, Phys/Magic Defense, and Max HP/MP. Each time you gain a level in one of these Runes, the chance of success will go down, and I haven’t seen the level cap for it just yet. It looks like 7 silver stars, but perhaps it goes even further beyond that. If you tap on the “Rune Fragment” button, it tells you where to get them (primarily from the Tower of Insolence, which you can auto-clear once a day for a reward). Another way to increase your power is the Skill System. You have active skills (abilities) and passive skills, which can be leveled up using SP (Skill Points). You gain them mostly through leveling up but can be acquired in other ways. Using those and gold, you can improve your skills, but each rank of a skill also has a level requirement. The gear system ties into this also: you can use armor that doesn’t fit you (I have a Warrior Armor piece on my Mystic, because it’s A-Rank and good) but it will lower your passives power, and if you have a Weapon that doesn’t fit your class, certain skills may be unavailable.

The option to spend money on gear exists. It's faster, but you don't have to.

That does lead me to a minor point of contention: There. Are. So. Many. Currencies. Goodness. You have Red Diamonds (acquired through in-game content), Blue Diamonds (real-money currency I believe), Topaz (acquired as an add-on for cash purchases), Gold (obvious), Friendship Points (need friends for this, used in the shop). There’s also Honor Points, Rune Fragments, and many more. One thing to note is that if you run out of Red Diamonds on a purchase, it will take the remaining from any Blue Diamonds you have, so players who spend real money should be careful. The game does warn you at least. However, I do worry that since you can buy S-SR chests with gear in them for Topaz, that Lineage 2: Revolution will become a very serious pay-to-win environment. There is a lot of PVP in the game, and the ability to buy A-SR gear using Real Money currencies can feel pretty frustrating if you want to PVP. There will be Whales playing, and they will be spending money. Is there anything in the game locked behind a paywall? Absolutely not. Will you be crushed in PVP and out damaged in PVE by some people? Absolutely. If you’re playing to enjoy this compelling story, complete dungeons/raids and make friends, you won’t even notice that there are people spending money to get stronger faster. Sure, you can get better stats through PVP, but you can also gain stats in other ways. These stat jumps aren’t huge, but every bit counts. The biggest stat jumps seem to be on gear. But if that’s a concern for you, I would definitely advise you: be aware that you can buy chests with real money, and that can foster a P2W environment.

Lineage 2: Revolution is fun, it’s interesting to see all the many ways you can min-max. You can create powerful gear through the forging system (combining and leveling up the gear of the same type), and trust me, there is NO shortage of low-level gear to combine to power up your current gear. But the game does harp on you pretty often about how your crap gear is dragging you down, hinting not-so-subtly at spending real money. It also has a Chaos Rating. At the top left of your screen there’s a color/symbol which changes based on your rating, from Blue (does not attack players) down to Yellow (attacks all players other than party members/friends/clan members) and Red (attacks all players other than party members). I can certainly see potential for people griefing, even their own clan mates. PK’s not available in all regions of the world it appears, and you can lower your chaos rating by killing lots of enemies in the world.

The bottom line is that Lineage 2: Revolution is a lot of fun. It’s compelling, the story is fun, the PVE content is fantastic. It’s pretty, enjoyable, and does offer a lot of rewards to PVE players. But I do worry greatly that the ability to buy gear in-game with real money will absolutely wreck PVP. Only time will tell, but I’ve seen where that road leads before. At the end, Lineage 2, for fans of min-maxing and fun PVE, they’ll be right at home. There are tons of daily quests, weekly quests, achievements that give rewards, there’s just no stop to what you can do in the game. Just be aware of what P2W environment you’re getting into with PVP content.