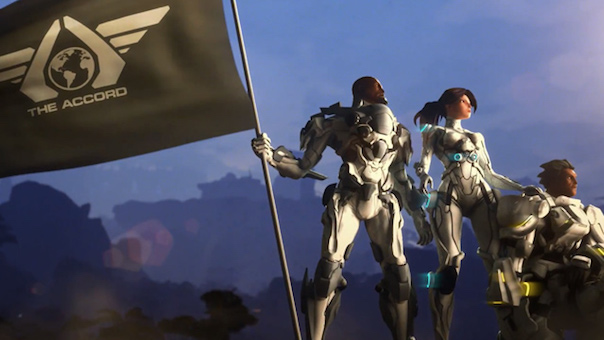 Red 5 Studios announces the release of Update 1.2: Together Toward Victory for the MMO shooter, Firefall. This new update introduces a plethora of new content including more open-world encounters, improvements to Broken Peninsula PVP continent, and the very first 5-man instance, Operation: Miru. These exciting new challenges are available to all players, absolutely free.

Step into the volcanic depths of Devil’s Tusk and put a stop to the Chosen’s nefarious plan to release a colossal monstrosity on the Accord. Squad up and venture into this brand new 5-player instance to face-off against the many threats lurking within the molten cavern. Will you slay the beastly Scorcher menace or confront the dreaded Chosen forces? The choice is yours!

The Chosen army is threatening the Accord supply line by assaulting Skydock, a key resource transportation hub. Located in Coral Forest, Skydock is a massive open-world battle where players must defend against the relentless assaults from the treacherous Chosen forces. Prepare to fight your way through multiple-stages in this epic encounter against humanity’s greatest nemesis.

After numerous failed attempts at securing the Accord watchtowers, the Chosen forces have decided to employ a new tactic in their offensive. Melded Outbreaks are new challenges where Chosen soldiers and melding creatures are unleashed through a portal on various Accord watchtowers. Repel the enemy threat to claim some time-limited bonuses in addition to mission rewards.

The battle for resources continues on the war-torn continent of Broken Peninsula. Various improvements were made to this PVP warzone, including content refinement and stability updates. Job Boards have also been introduced in Broken Peninsula, where players can contribute to their employing faction by completing specific requests. Beware of your progress however, because the opposing corporation will place bounties on top performing pilots. Prepare for combat!

To get a glimpse of the epic war against the Chosen in this update here.

For a complete list of new features and updates included in Update 1.2: Together Toward Victory visit http://www.firefall.com/updates/1-2.

Players can play Firefall right now completely for free via Steam or directly from http://www.firefall.com/