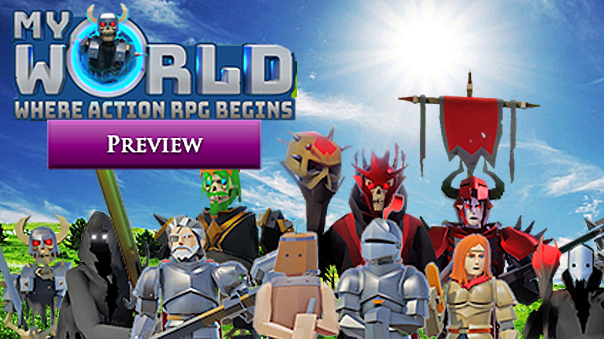 Interesting. That was the first thought that came to my mind when introduced to MyWorld. Having studied computer science and working as a software developer, I love creating stuff. It’s amazing how much you can accomplish with tools if you know how to use them well. I have worked on some small game projects for fun as side projects both alone and with groups. Putting together an entire game with a proper story, game mechanics, level design, and more can be very difficult and time consuming. Without the proper knowhow and team composition of individuals who can plan, write code, create stories, and produce art, you will not end up with a very good game. Not everyone is able to create a game from scratch. This is where MyWorld comes in, a game which lets you play and create your own role playing game (RPG).

The idea of providing a simple tool for gamers to create their own games or RPGs is not a new one. We have seen many RPG Maker tools over the years. However, MyWorld goes a bit further by seamlessly integrating the creation and playing process into one. You don’t go through the usual process of designing the game, building it, and then trying it out. Creation is simply like a different menu in the game.

The creation and playing elements are seamlessly integrated

Even the main menu is built right into the game. While working on my own game, I did consider going with this approach and avoiding any simple menus. However, after some thought, I decided that having players run around to carry out actions that could simply be done by clicking a button would be annoying. This is the same feeling felt when having to navigate the main HUB in order to carry out simple tasks like loading a map or accessing the Steam workshop. It’s cool at first but gets annoying and unnecessary over time. However, I can understand why it was done as it helps to push the seamless merging of the creation and playing process.

MyWorld comes with some premade RPG adventures which can be great to understand how the game works. However, the real fun begins when you jump right into creating your own adventures or load up those shared by the community. The built-in world editor gives you a good amount of control to create your own unique adventure. You can modify the terrain, place various props, set spawn and check points, create monster spawns, and even design custom quest lines. With multiple tools at your disposal and over 200 items available for use, MyWorld gives you a lot of freedom to create the adventure of your dreams.

It wouldn’t be an RPG without breaking some pots

After creating this adventure, you can jump right into the action. The game features multiple character classes with their own unique playstyle and abilities. Unfortunately, you cannot create custom classes, equipment, or moves but with the development closely working with the community’s desires, nothing is off the table. Overall, the gameplay is decent but far from being smooth. The movement, combat, and other actions don’t feel very natural, and you can tell that the animations need some work. I hope these issues can be resolved after the early access phase as the inability to play the game properly hurts the quality of any adventures created by players.

Somehow this broom deals a lot of damage

Apart from just jumping into the action by yourself, you are also able to play online with friends in either a cooperative or player versus player setting. While online play is always great simply because playing with others is often a lot more enjoyable than yourself, it can serve an even greater function in MyWorld. By playing online with others, you can learn in real-time what others think of your adventures and work to improve it using their feedback.

There are various classes available

MyWorld does a great job at achieving what it set out to do: give players an easy way to create their own unique RPGs. It offers a lot of customization options when it comes to creating your world but the character development and customization could use some work. However, I feel that MyWorld faces a problem seen by many creations: the product is there, but where is the market?

Oftentimes, we as creators jump the gun and start creating something that we find to be interesting without conducting the appropriate market research. RPGs are loved by many but some of the main features that make an RPG great require a lot of work and dedication. MyWorld gives players without a lot of knowledge of game development the opportunity to create their own RPG. However, it is likely that these players are not as experienced and dedicated as professional game designers and developers.

The in-game TV for tutorials is pretty cool

Without this experience and dedication, it is highly likely that the created RPGs will not be top notch. Of course, they may still be fun to play around with at times but RPGs created in MyWorld will always be overshadowed by those created by full time professionals.

I’m not against tools allowing anyone to get into game development but I don’t think that the RPG genre is the one to go down this route in. We have some amazing games such as Garry’s Mod and multiple mods available for other games. The thing about Garry’s Mod or even custom maps in Counter Strike and other games is that they are usually simple minigames or feature some unique play feature. For example, we can have a lot of fun playing prop hunt where players turn into random items and work to hide in the map. These kinds of games have their own unique features which can lead to hours of fun.

However, in MyWorld, while players will be able to create custom worlds and questlines, the engine does not give them the opportunity to create unique features that will lead to players flocking to their creations. RPGs rely on solid mechanics and storylines. Those who can meet such requirements will likely know how to use more advanced tools and game engines. This leaves MyWorld in a weird place where amateur creators will create decent games in a genre where polish is a necessity.