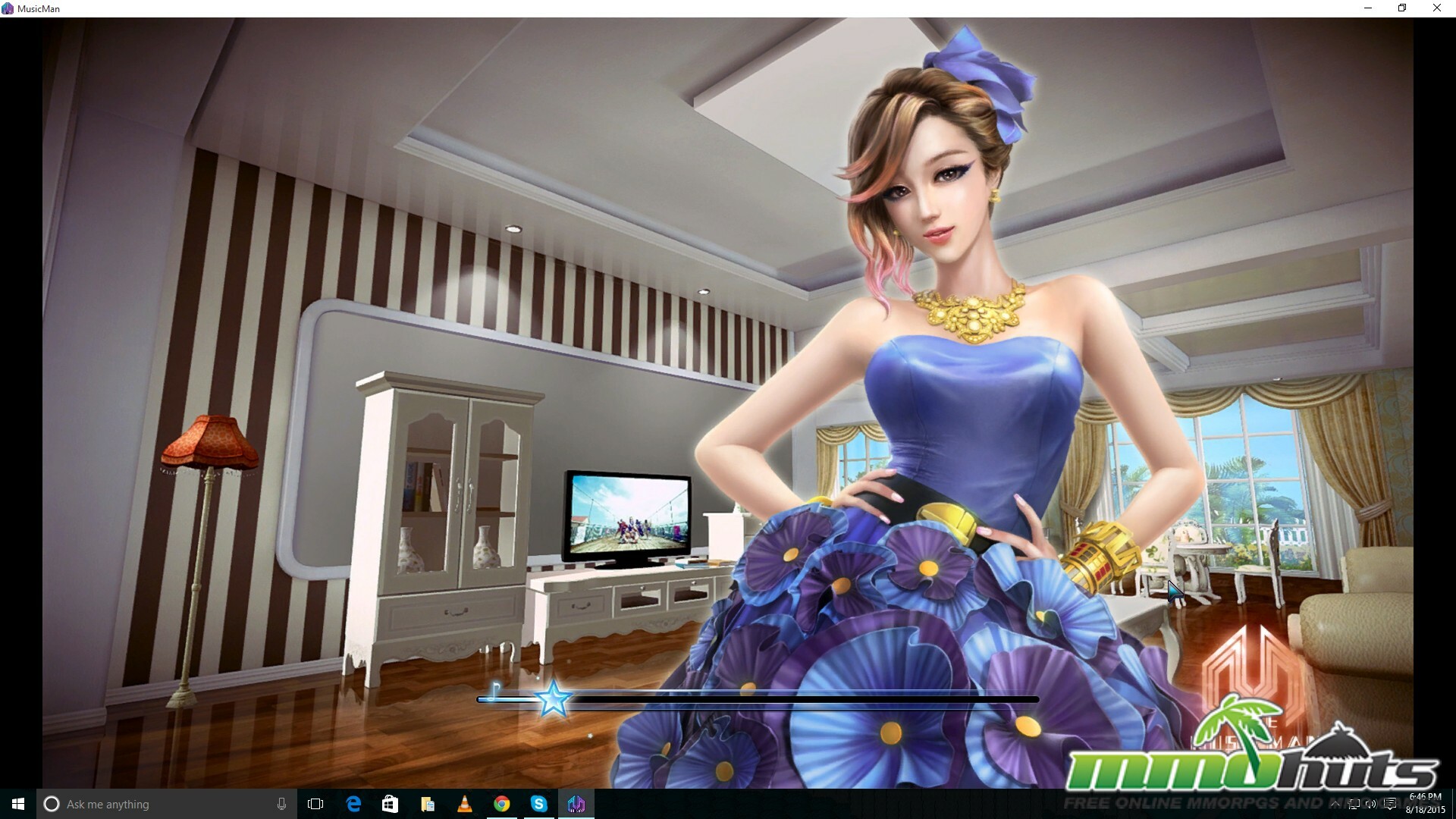 It’s really hard to find an online game concept that will be a stand out these days. Pirates? Done it. Fantasy dungeon crawl? Done to death. Shooters? Hope your project is backed by millions in dev dollars or no one will care. Outer space shooters? You be the Destiny killer! So, how do you stand out these days? Dance Academy: Music Man Online has done just that! In Music Man Online (Humorously shortened to MMO), you play the role of a dancer; you are in an academy very reminiscent of the Yugioh: GX Duel Academy, where you are learning the ropes of changing the world through dance, tapping into a mysterious power flowing over the world. It’s basically the force, but dance. There are a lot of cool customization choices, you get your own place that you explore and change in a sandbox style; you even get a creepy little kid that dances with you. I feel like I should mention you have to take care of the kid too, feed ‘em, etc. It’s even got a name. The “Baby System,” which is not a toddler version of Gundam’s “Zero System.” I didn’t have a lot of experience with the Baby System, only that it danced with me and kind of unsettled my nerves. 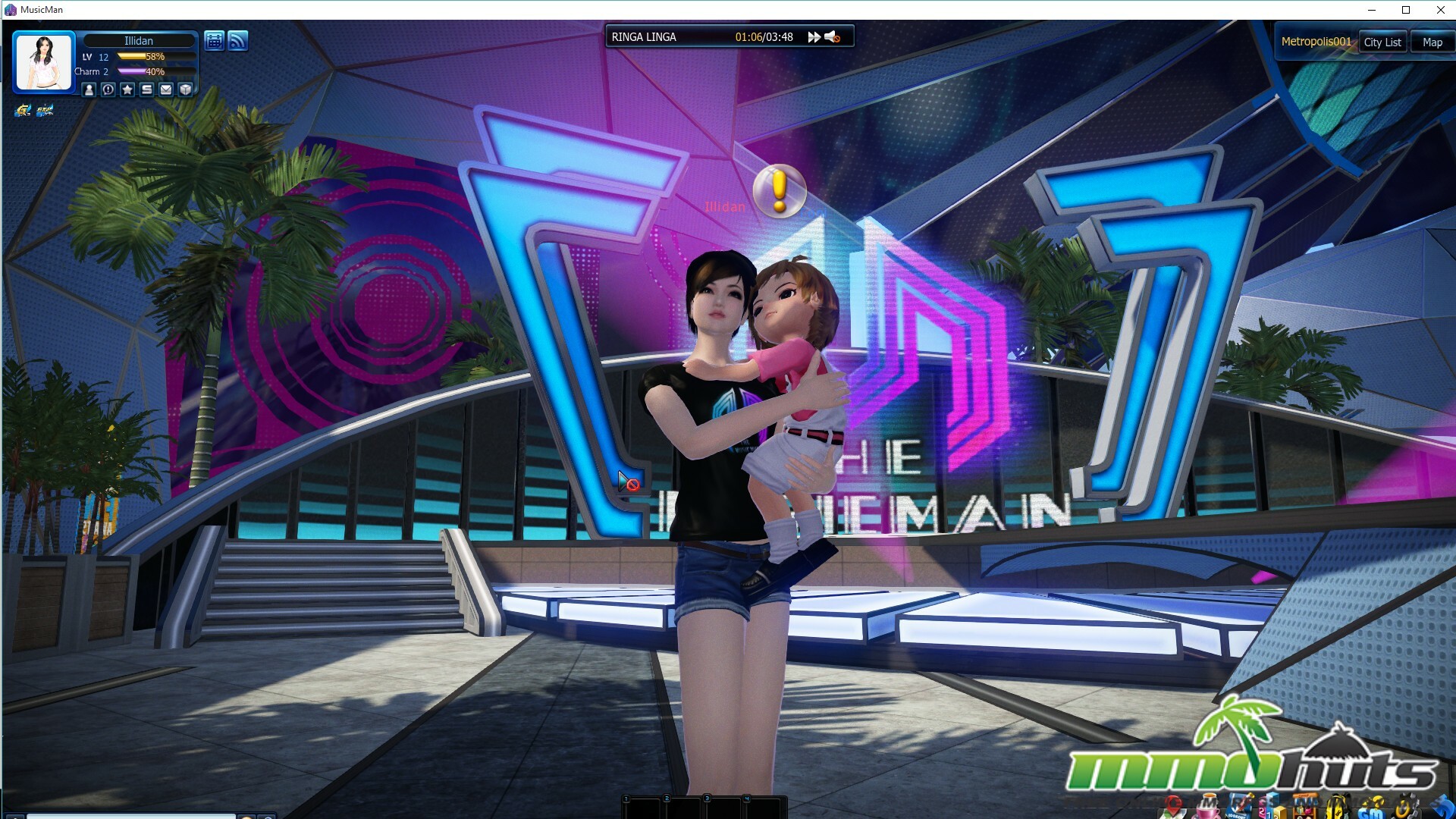 Never fully figured out if I'm a single mother, or the kid is the start of hallucinations as I descend into madness.

After a week or so of not playing I came back to it (Pax is hard on gaming press, you know!) I came back and all my starting clothes were gone! I was under the impression that those items were permanent, but it seems the only permanent items I have are the promo clothes I won around the same time I started this game. It’s admittedly a little frustrating to have items that only have a few weeks to a month of life before they vanish akin to a cheap old fashioned free shooter game, but the game is pretty generous with giving you in-game currency and items all the time; playing the game regularly is quite rewarding. If you are into rhythm and dance style gameplay, they shouldn’t have to twist your arm to get you to keep playing for some time! And in true Korean fashion, it’s quite varied. There are so many damn different items that I didn’t know where to start. Trust me, our follow up video showcasing this is going to be worth the wait. Some of the clothing items cost in-game currency, and others cost points you buy, so you certainly have options.

The music is not simply Korean Pop though; Japanese, Chinese and even Western Dance mixes are all over this game. There is really something for every type of dance music enthusiast, and though it’s not really my kind of music (though I admit to being a bit of a Jpop fan), it’s very catchy and authentic. That’s important to a game like this, where your character is dancing to music and following patterns: I genuinely feel that having real music that players can be familiar with will help keep the beat and get them immersed in this fictional world. Ultimately the game can become a grind, but I have found if you just like dance games, you don’t really have to involve yourself too much with the world, the story or anything. 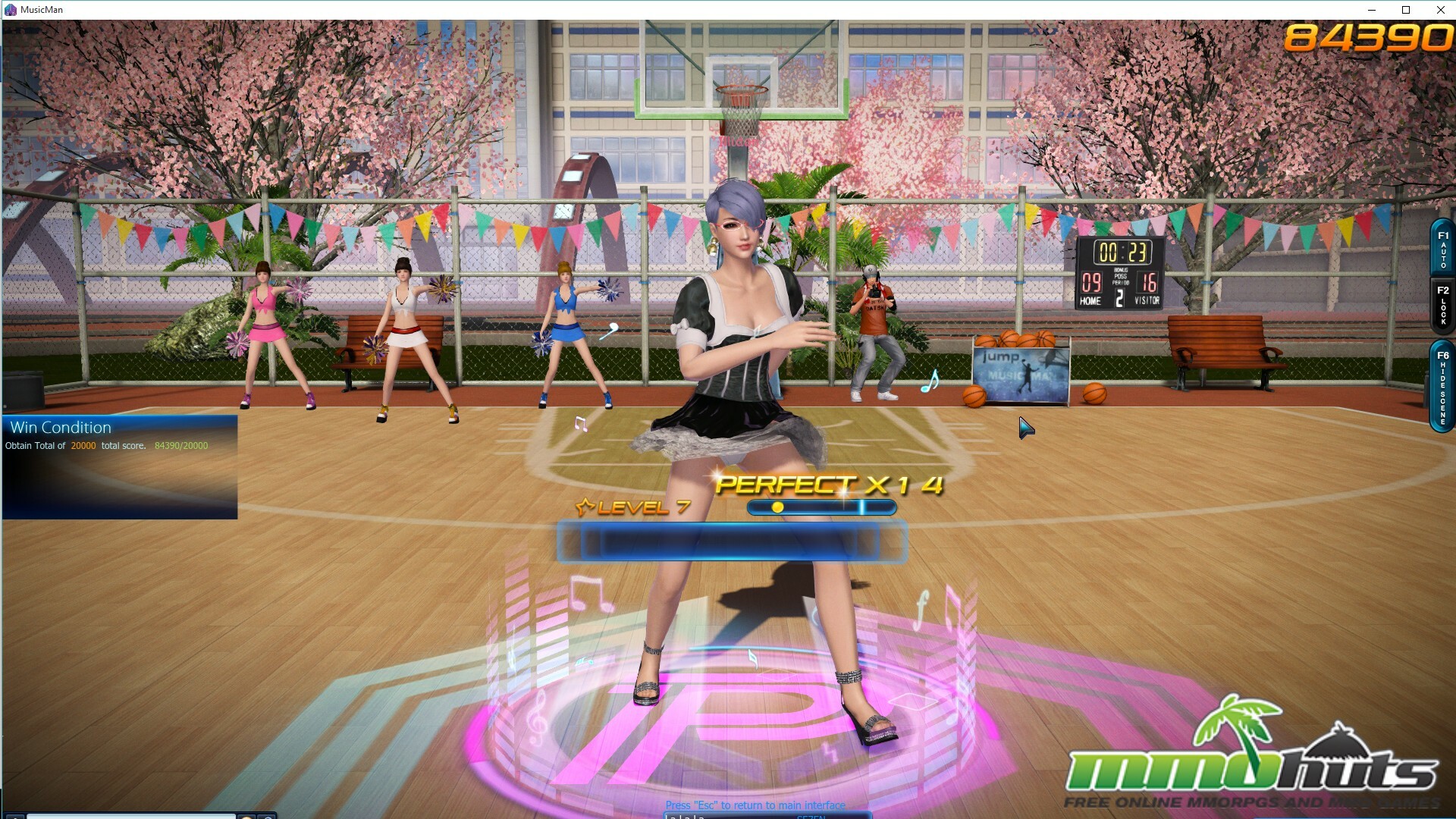 The music is surprisingly diverse, and from real artists.

But the story is a part of it, campy though it might be. When I first started the game I found it to be quite easy to just jump into a dance song solo, but upon returning it was all group rooms where I waited forever. That was significantly less fun. Instead, I found myself going back to the story mode so I could at least dance when I wanted! It also has a stamina system (this is a free game right now after all) in the form of hearts, but they replenished pretty fast for me.

I feel like I should note that failure is not tolerated; the first time I was going through Chapter 1, I got to the final stage on the map, failed and had to start the entire map over. That will be incredibly frustrating I’m sure, but it’s bound to happen if you’re not god-like at every style of dance. I should note that I left the map and went back and I was where I was. Uncertain if that is “working as intended” or a bug! The style of dance varies (in reference to button pushes): Sometimes you have button presses followed by timing the space bar at the right time while other times it’s a series of wasd’s with halos. You have to hit the button right when the halo is snug around it, then use the mouse to slice the buttons away. Or all the moves will be on the screen at once with their own timers and you have to hit them in order at the right time. It gets intense, but I see it as a pretty solid way to show just how hard dancing can really be. 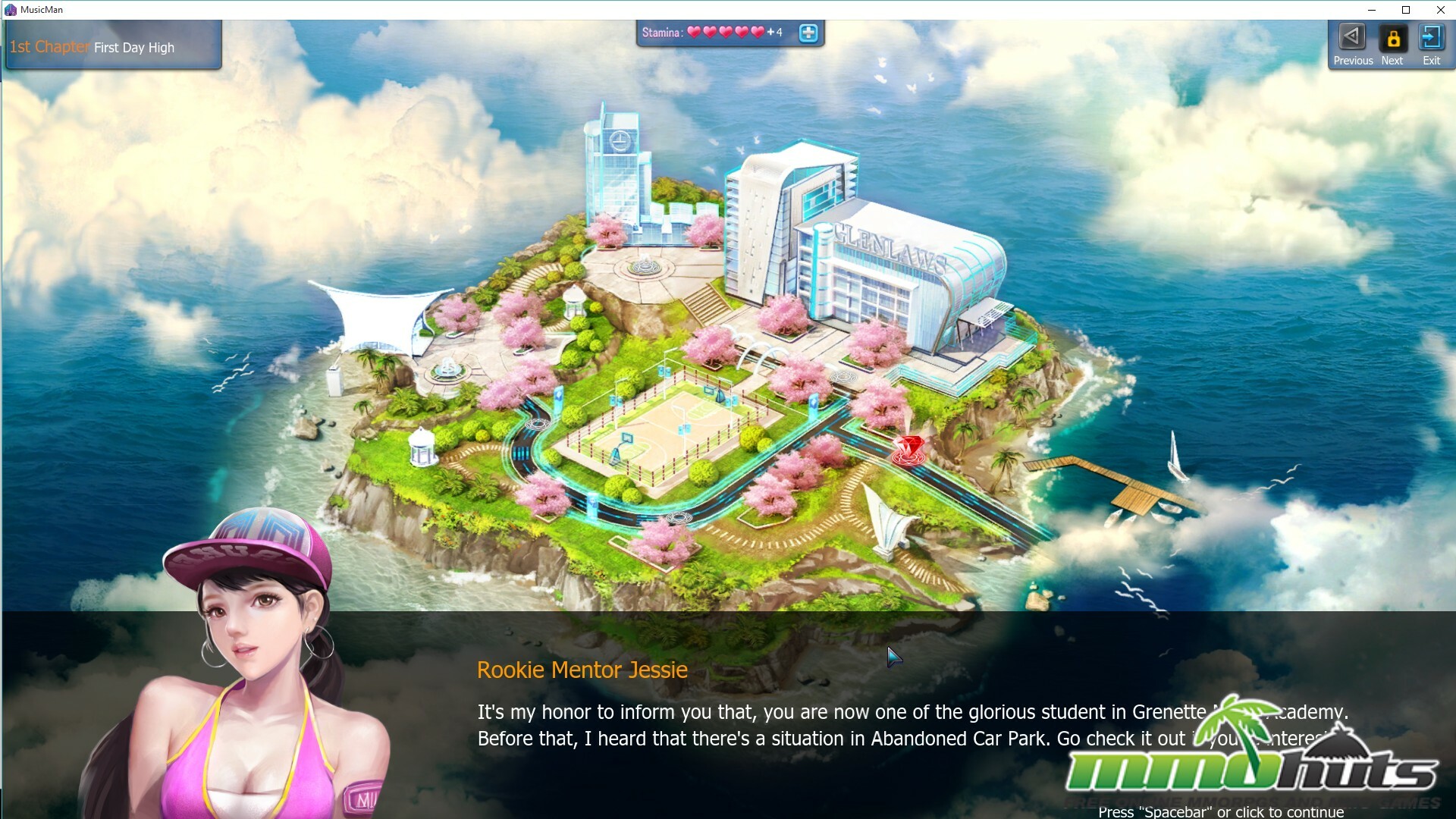 Story mode wants to see you fail as you cry in a gutter, lying in a pile of broken dreams.

Dances do have a rating system, and you gain exp/coins for victory/success on your dance missions. So in that it’s very much an MMO; it’s almost as if Second Life or an open world social game of that style were actually an MMORPG. And if you aren’t all that great at dance games but want to get into the rhythm, there’s a bar on the left side of the story mode that changes from Easy/Normal/Hard (unlockable later on in the game). Depending on your accomplishments, your fame will grow and your home will be able to look fancier still! That’s what this game is about: Saving the world with dance and living the opulent lifestyle of a star. Your crew reflect you as well, so your Dance Crew (essentially a guild) will need to look on point too! I appreciate the level of detail and work that was put into this game, even if again, the story is kind of uninspiring. But it’s fun! And really, isn’t that what matters sometimes, just having fun? I know I’ve made a reputation on disliking things without an engaging story but honestly, this game has addicted everyone I have showed it to. It’s just fun. You can hang out in Night Clubs with people, pursue your life of dance and fame, and take care of a creepy little toddler. The Music Man has it all!

It might seem like a pretty casual game at first, but there’s a lot going on under the surface. Once you hit level 20 you can collect a salary, there’s the whole Baby aspect, working together as a dance team, and certain parts of the story require levels/charm levels to move on. And it’s addictive. I kept taking breaks writing this to go back to it and dance some more! It took me back to my youth when I was fit and played lots of DDR. And the modes are varied enough so you won’t feel like you’re doing the same things over and over all of the time. That’s important for a dance game, and this one will keep you on your toes, even though you’re sitting down to play it. I hope. I don’t feel like a write up can truly do this game credit, so you should look forward to a Bottom Tier experience of The Music Man! Can I do it? Can I live up to the Legend of the Mystical Dance Man (not a real thing)? I don’t know, but you can be the judge!

Kinda fanservy, but the graphics are quite solid. It’s very bright when it needs to be, and dark and littered with strobe lights when required. It’s a cute game, but the little “Baby” character really makes it awkward and strange, with how adorable and cherubic it is, while the rest of the world is kind of sexy. Its imitation of the same sexy dance moves as my primary character filled me with a little concern. I do appreciate the little tantrum my character throws when it misses a step though.

The controls are incredibly sharp; just what you need in a rhythm game. A rhythm game with poor controls becomes some horrible, unspeakable thing. Luckily that’s not the case here. Some of the steps become damn near impossible for me to hit, but that’s not speaking to the controls, simply to me memorizing motions of arrow combinations; it comes with practice. But the game’s rhythm controls are spot on.

Lots and lots going on here, possibly too much. It’s admittedly pretty similar to other dance games of its kind, but you can only revolutionize so much as far as I’m concerned. Most of the other modes are just hanging out and socializing with people, but where’s the harm in that? Most of my time in WoW is spent hanging out and talking to people, same with Final Fantasy XIV. This has much of the same. But the gameplay all told is quite solid.

The selection of music is terrific, and if you’re into this kind of game it’s likely a fair assumption that there will be something in this catalogue that catches your eye. From Britney Spears to JJ Lin, the choices of music will not disappoint. It might feel a bit repetitive, as the gameplay could in long doses, but it’s authentic as I stated earlier. Everything about the soundtrack to this game is stellar, and if you are looking for a dance game where you can get lost in the sounds, you’ve got it right here.