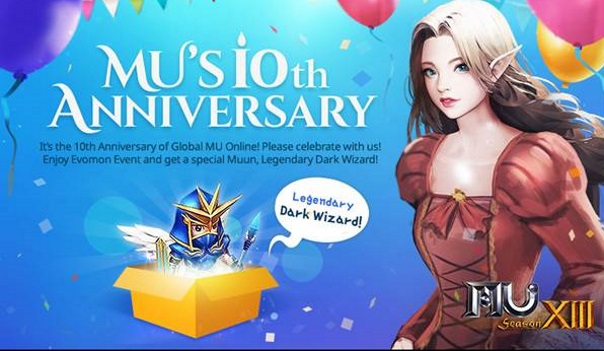 MU Online is proud to announce it has reached ten years of service and boasts 56 million registered users as of this date. To celebrate they are not only holding an anniversary event in-game but also offering special time-limited packages. From today until June 4th, the MU Online team is running a host of anniversary events, such as Evomon Hunting Event, Evomon Ranking Event, and Mystic Gift Box Event.

First, players can collect Summoning Scroll Fragments by hunting monsters to create an Evomon Summoning Scroll. Once they drop the Evomon Summoning Scroll to the ground to summon a Lv. 1 Evomon and hunting the Evomon, they will have a chance to level up their Evomon or receive a dropped special reward box containing items including Jewels, (Hero) Bloodangel Soul, Garuda’s Feather, or Excellent Items. Players will be ranked by the maximum level of the evolved Evomon and the total damage to the Evomon. When listed in the top rank, they will receive special rewards – Legendary Dark Wizard Muun, Soul Mastery Set, and Ruud.