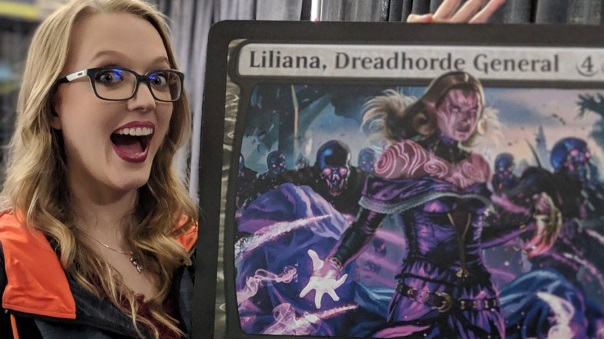 Now that the Magic: The Gathering Arena Mythic Invitational is over, I reached out to a few of the people who attended, to talk Magic, how they feel about the game and event, and more! Today’s interview is with AliasV! She’s a streamer for compLexity gaming, and was one of the casters of the event!

Ragachak: Though I have to watch a lot of the earlier matches via VOD, I absolutely loved all the casting for the Mythic Invitational! Are there any moments that really stood out for you?

AliasV: For myself personally, the games that swung wildly in favour of the other player stood out for me most: Skybilz’ double Chainwhirler off the top with Experimental Frenzy, Matt Nass’ Unmoored Ego, Savjz regaining his cool while facing down a triple Riot Carnage Tyrant. All those moments make for excellent Magic, and I absolutely loved each one!

Ragachak: War of the Spark is going to shake up MTG like never before, in my opinion. Are there any cards spoiled that you’re particularly excited for – whether it’s lore reasons or mechanics?

AliasV: I have yet to take a proper look at all the spoilers thus far, but I’m really looking forward to seeing all 37 Planeswalkers. I think this set will be reminiscent of Dominaria in its design, but potentially far more impactful than the Legendary creatures were. I love the static abilities on all the Planeswalkers, as well as the different rarities.

Ragachak: Your casting, as well as everyone else at the event, was just remarkable. Do you have any advice for fans of MTG that might want to get into casting as well?

AliasV: Why thank you! One thing Magic did for this tournament was encourage co-streaming, where content creators could rebroadcast the event to their own audience. This is a great way to commentate on big events so I’d recommend that to anyone looking to get in on the action. Taking part in community tournaments as well is a good way to gain experience, so keep an eye out for opportunities there as well!

Ragachak: Unlike normal MTG, players in Arena have been able to swap decks out between matches, instead of being bound to one. Do you think this makes casting/viewing more difficult, or more exciting?

AliasV: Wizards of the Coast introduced the Duo Standard format for the Mythic Invitational and I personally enjoyed seeing more than just 64 decks. For newcomers to the game, especially, seeing a wide variety of decklists increases the appeal of the game in my opinion, so I was all for it. While the format may not be what most players are familiar with, I think it made for a great viewing and casting experience overall.

Ragachak: MTG Arena really makes it easier to get into the game than ever before, and events like this really show off Magic in a positive way. But is there anything about Arena, or the Mythic Invitational you’d like to see changed to improve the new-player experience?

AliasV: Spectator Mode is the first thing that jumps to mind. The easier it is for a viewer to engage with the game and understand it on their own terms, the better. I know this is something many players have asked for, and I’m certain Wizards are actively working on getting this in the game. Other than that, there are always improvements that can be made, and Wizards have shown time and time again that they take community feedback and suggestions seriously.

Ragachak: Do you think having so many Planeswalkers in the Standard format (even though some are only -Loyalty/Uncommon) will make the meta more difficult to read, or make deckbuilding more challenging, or do you think it will be a boon for MTG’s coming year?

AliasV: I honestly can’t say, I think the players will definitely experiment with the Super Friends lists, but there’s no way to know yet how efficient or synergistic they’ll be. The biggest change in the meta will happen when RIX, IXL, DOM and M19 rotate, that I’m pretty sure of.

Ragachak: If you could delete one Planeswalker forever, who is it, and why would it be Jace Beleren?

AliasV: Hahaha, well being a relatively new Magic player, I’m not familiar with all the Planeswalkers but I’ve heard only bad things about poor Jace. I’m not sure I’d delete any, honestly, even those I dislike seeing resolve. (I’m looking at you, Teferi!) They all play their part in the Magic story, even if some don’t do as well as others!

Ragachak: If people want to find more of your streaming/casting, where could they do that on the Internet?