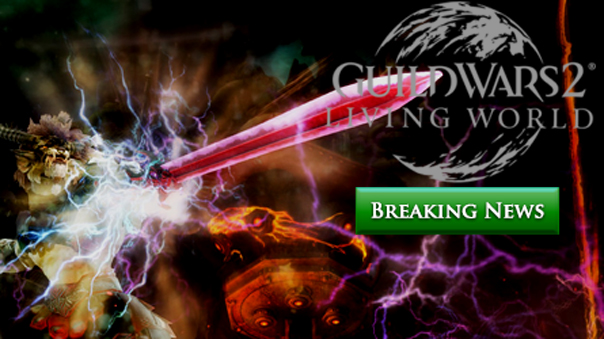 Once again, Guild Wars 2 is bringing its playerbase a beefy update with plenty of content to enjoy. There was a dungeon, a PVP zone, and a fractal – fractals are bizarre PVE dungeons with platforming elements. Like Guild Wars 2 itself, the only thing that really held my attention was the PVP (rarely do I get the pleasure of fragging devs in their own game) while the PVE just seemed like a colorful cluster-whoops. I’m not sure how much longer I can find dodging danger zones and DPSing interesting, but I’m told to understand that some people still enjoy it. I can’t fault Guild Wars 2 for the base gameplay, it’s just a shame that HP sponge bosses wreck that lovely momentum and throw a greasy bone in the works.

I vaguely remember a boss on a giant grid, and the grid lit up with electricity, and of course you don’t want to sit in the electricity. So it was just this big game of Hopscotch/Simon Says while being chased around by a cat-demon with a giant sword. According to the devs, it gets more and more complex and challenging on higher difficulties, with the ground getting more hostile, more active, etc. Again, I understand some people like this kind of thing. To each their own. Also there were kitty golems, and when we killed them, they just respawned afterwards, missing one – so in the end, the one we fought last was the one we killed first. It was weird. Also there was an effed up voice barking at us and telling us how dumb we were, and recycled art from all over the game jammed in the place. The entire thing was disorienting and strange, but kind of fun. It gets your blood pumping, especially if you’re caught up in the Guild Wars 2 Living Story and get why all this is going on.

Of course this is Guild Wars, and as an old school fan of the original, the highlight of any update is always going to be the PvP. They brought back old Lion’s Arch as a new arena, and this pleases me, because I loved the old Lion’s Arch. You can now live the fantasy of crushing town spammers to cleanse this grand locale of all who oppose you. I ran around as a longbow ranger and sniped people, generally holding the top of the charts as my team steamrolled to back to back wins. I’m a sly brat. It was a lot of fun, too; I liked the way the map worked. The matches were fairly close, and it was a standard ‘stand on the circle to capture the point’ deal, with a twist in the middle – cannons you can fire at enemy ships, when captured. If you’re ahead, these cannons do twice the damage, possibly clinching a victory. If you’re behind, you only do the normal amount. So this zone is designed for a kind of snowball effect, yet it didn’t play out that way. Knowing how destructive the cannons will be as the losing team, you tend to rally harder to ensure said cannons aren’t fired. Both matches were surprisingly even from start to finish as a result. I truly enjoyed this new PvP battle. I could imagine running it dozens and dozens of times without getting bored. Walking away, I felt a twinge of nostalgia for the old Lion’s Arch as well. Why can’t they bring it back? The new one looks too much like Disneyland.

The last thing we did was a fractal. I think we ran through a forest full of wolves and giant tentacles, lighting campfires along the way to save ourselves – it was pretty cool. The devs said they designed this because most players in their PVE content just find the quickest way to run to the end and get the reward, so they decided to make gameplay that went along with that behavior. I think it made for an intense and fun sequence, challenging in its own right. Anything that goes toward atmospheric and away from meat-sponge tank-n-spank is all right by me.

At some point I fell off of a cliff during the obligatory fractal platforming section and I got caught in some kind of scaffold and couldn’t even die to free myself. A dev had to rescue me, it was funny. They’ll fix that before release, of course. You can thank me later when your character isn’t stuck and glitched.

In all, it was a good time with the GW2 folks. The PVE sections sort of blurred together for me, but the PVP was memorable. Your mileage may vary! The good news is, GW2 keeps cranking it out. I’m impressed.

Out of the Shadows

Revenge of the Capricorn