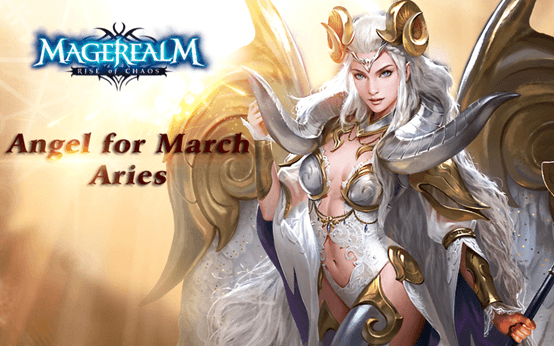 Magerealm, GTArcade’s action MMORPG, is ready to welcome a new Angel to the fray. Introducing Aries, the Angel of Retribution!

There are few Angels whose name carries as much weight as Aries. Known for taking action first and asking questions later (or not at all), Aries believes true peace cannot be achieved without conflict. Aries’ rather radical views has always put her at ends with other Angels, but in this time of crisis many have come to embrace her ideals. They believe that the passiveness of the Angels led to the rise of the dark forces. If only the Angels had swiftly crushed evil before it grew out of control.

Aries is a firm believer of the old saying “an eye for an eye.” Her skill grants a powerful damage shield on the player. For 10 seconds, half of any damage the player takes is reflected back to the attacker. With Aries at your back, your enemies will think twice about picking a fight!

Turn your enemy’s strength against them with Aries, the Angel of Retribution! Join Magerealm today and experience the MMORPG you’ve been waiting for.