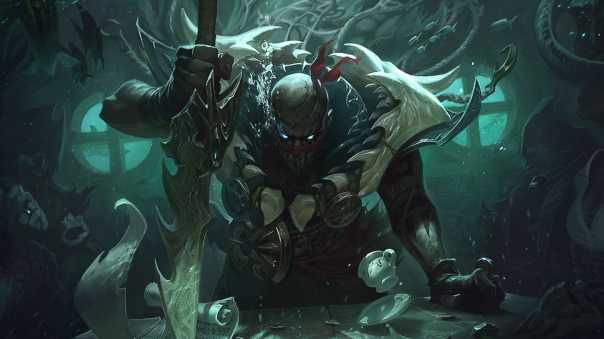 League of Legends is getting ready to drop it’s 8.11 Patch, and with it comes an absolute slew of changes. 8.11 is a part of an on-going multi-patch pass at adjusting role tweaks and game pacing. Mages were dealt with 8.9, jungle in 8.10, and 8.11’s focus is marksman and jungle changes. Later in the 8.11 cycle we’ll also see Pyke, the Bloodharbor Ripper (who is totally a support, honest. He has an execute and everything) and with him will come a temporary return to Butcher’s Bridge in ARAM. However, before we get into the meat and potatoes of some of these important changes, let’s take a look at some ARAM updates. There are permanent, quality-of-life changes and temporary gameplay changes coming to the Howling Abyss. A huge one is the “Available Champions Pool”. It will smooth out, perhaps, the Champion Select Experience, by letting players put those champs in the potential selection pool, without having to wait to the last second and re-roll then. Another big change is that ARAM will have its Free to Play pool widened, to make sure the matches are truly random, and not just someone with a handful of champs making sure they have a reasonable shot at what they want. From here on out, ARAM will have a free to play pool of 42 champions, and Pyke will also be in that Free to Play pool during the upcoming event. Further details can be found on this dev blog.

I’m not going to focus on every single change that’s in the notes, because it’s 18 pages. Instead, I want to look at some of the most impactful/interesting to me as a player. However, every single Marksman had adjustments across the board to their base stats. All Marksman saw a 4 damage nerf and pushed that damage into their growth stat, but what this means that even the aggressive, non-marksmen champions won’t be chipped down by Marksmen attacks as quickly, giving those other champions more of a time to have their presence known in the lane. Hunter’s Machete also saw a base attack damage decrease, and a bonus attack speed increase at level 1, for those fun, happy jungler types. There’s also a new item in this update, the “Stormrazer”. It’s definitely built with the Marksman and damage Jungler in mind (hell, I could see it on melee mid/top laners too, it’s pretty damn strong).

“Essence Reaver” was intended to be the alternative late-game scaling item for marksmen who care more about spell casts than auto attacks. Then you built Infinity Edge, and then you built a Zeal item, and from there, why not just go for 100% crit? Just you know, just do it. However, Essence Reaver is now built around a new power spike, letting caster marksmen to double-down on the spell-slinging and unleash their spells in a powerful barrage.

I like the change to Marksmen items, all around. Critical Strike in general, had an average cost increase, while Lifesteal items saw a cost decrease. It’s expensive to build a Marksman, so perhaps players will be able to pick a solid starting damage item, then move into the cheaper (slightly) Lifesteal stuff. Some examples are Phantom Dancer going up from 2600 gold to 2800 gold, Runaan’s Hurricane going up from 2600 gold to 2900 gold, whereas Blade of the Ruined King went down from 3400 to 3200 gold, and The Bloodthirster dropped from 3700 gold to 3500 gold. They’re still more expensive than your average Crit item, but still a bit more reasonable. There is just so much overlap in the Bruiser/Assassin builds with Marksman items, so these items were heavily looked at, for their cost and what they do. Another major change is that Maw of Malmortius saw a Magic resist increase, as well as a Base shield value increase (but it no longer scales with bonus magic resist). This was typically the only Magic Resist item someone bought if they bought Maw, so it no longer focuses on the bonus magic resist stat. (New Magic Resist – 45 up to 50. Shield Value – 300+ 100 % of bonus magic resist -> 350 Shield Value). The final item I want to look at is Banner of Command. In a world focused on wave/lane control, Banner just did way too much. Banner featured too many useful stats and simply was too great. So the following changes were made:

In this Marksman-oriented update, we also have some New Runes added to the list. Two of them (Hail of Blades, Ultimate Hunter) hit the Domination tree, and Nimbus Cloak is a movement rune replacing “Ultimate Hat” in the Inspiration Tree. So what do these do? Hail of Blades gives champions the burst they crave, but until now there was no real burst keystone.  It gives 50-100% attack speed for the first three attacks made against enemy champions (at level 1-18). If more than 1.5 seconds have elapsed between attacks, it ends. Hail of Blades also allows you to temporarily exceed the attack speed limit. Its cooldown is 5 seconds out of combat. Ultimate Hunter is replacing Ultimate Hat and is being brought in line for the Domination tree. It gives your ultimate 5% reduced cooldown, plus 2% per Bounty Hunter stack. You gain stacks the first time you get a takedown on each enemy champion. Ultimate Hat has a replacement in Nimbus Cloak, which shortly after you cast your ultimate, you gain 100 movement speed, which decays over 2.5 seconds. For the duration of this, you can pass through units. It has a 60-second cooldown, and unlike other runes, it’s cooldown is affected by cooldown reduction.

More changes to the game as a whole, with Turret Gold being adjusted. More of the reward gold is being granted locally rather than globally. 176 gold is split among nearby champions before, and now it’s 300 gold. 100 gold is now given to every allied champion on a global scale instead of 125 gold. As a final change, in the jungle, Baron Nashor saw some adjustments. Scuttle Crab also saw some changes, with its Respawn Timer increasing (135 -> 150 seconds) and the Shrine Duration also going up (75 seconds -> 90 seconds). Baron Nashor, apparently did way too much damage in the 8.10 patch, so he sees the following changes:

This is a huge update for League of Legends, and I am curious to see how Marksmen change with their stat adjustments, the item adjustments, and how Pyke shakes the game up. I still don’t think he’s a support. Would I use him in the dual lane? Of course, but I stand by him not being a support. He’s … something else. I’m hoping to keep doing these, so stay tuned for more League of Legends patch notes/update news as we get it!